Convergence of Generalized Belief Propagation Algorithm on Graphs with Motifs 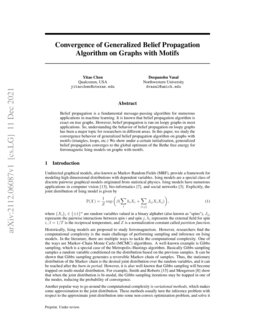 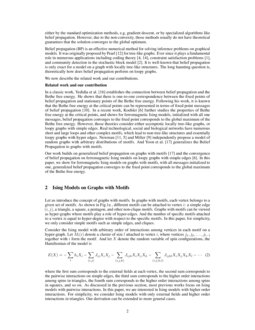 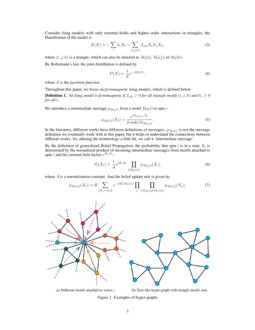 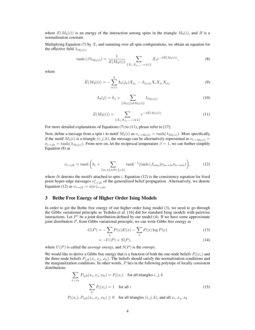 Due to the intractable nature of exact lifted inference, research has re...
David Smith, et al. ∙

. Explicitly, the joint distribution of Ising model is given by

are random variables valued in a binary alphabet (also known as "spins"),

Jij represents the pairwise interactions between spin i and spin j, hi represents the external field for spin i, β=1/T is the reciprocal temperature, and Z is a normalization constant called partition function.

Historically, Ising models are proposed to study ferromagnetism. However, researchers find the computational complexity is the main challenge of performing sampling and inference on Ising models. In the literature, there are multiple ways to tackle the computational complexity. One of the ways are Markov-Chain Monte Carlo (MCMC) algorithms. A well-known example is Gibbs sampling, which is a special case of the Metropolis–Hastings algorithm. Basically Gibbs sampling samples a random variable conditioned on the distribution based on the previous samples. It can be shown that Gibbs sampling generates a reversible Markov chain of samples. Thus, the stationary distribution of the Markov chain is the desired joint distribution over the random variables, and it can be reached after the

burn-in period. However, it is also well-known that Gibbs sampling will become trapped on multi-modal distribution. For example, Smith and Roberts [15] and Mengersen [8]

show that when the joint distribution is bi-modal, the Gibbs sampling iterations may be trapped in one of the modes, reducing the probability of convergence.

Another popular way to go around the computational complexity is variational methods, which makes some approximation to the joint distribution. These methods usually turn the inference problem with respect to the approximate joint distribution into some non-convex optimization problem, and solve it either by the standard optimization methods, e.g, gradient descent, or by specialized algorithms like belief propagation. However, due to the non-convexity, those methods usually do not have theoretical guarantees that the solution converges to the global optimum.

Belief propagation (BP) is an effective numerical method for solving inference problems on graphical models. It was originally proposed by Pearl [12] for tree-like graphs. Ever since it plays a fundamental role in numerous applications including coding theory [4, 14], constraint satisfaction problems [1], and community detection in the stochastic block model [2]. It is well-known that belief propagation is only exact for a model on a graph with locally tree-like structures. The long haunting question is, theoretically how does belief propagation perform on loopy graphs.

We now describe the related work and our contributions.

Related work and our contribution

2 Ising Models on Graphs with Motifs

Let us introduce the concept of graphs with motifs. In graphs with motifs, each vertex belongs to a given set of motifs. As shown in Fig.0(a) , different motifs can be attached to vertex i: a simple edge (i,j), a triangle, a square, a pentagon, and other non-clique motifs. Graphs with motifs can be viewed as hyper-graphs where motifs play a role of hyper-edges. And the number of specific motifs attached to a vertex is equal to hyper-degree with respect to the specific motifs. In this paper, for simplicity, we only consider simple motifs such as simple edges, and cliques.

Consider the Ising model with arbitrary order of interactions among vertices in each motif on a hyper-graph. Let Ml(i) denote a cluster of size l attached to vertex i, where vertices j1,j2,…,jl−1 together with i form the motif. And let X denote the random variable of spin configurations, the Hamiltonian of the model is

Consider Ising models with only external fields and higher order interactions in triangles, the Hamiltonian of the model is

By Boltzmann’s law, the joint distribution is defined by

where Z is the partition function.

Throughout this paper, we focus on ferromagnetic Ising models, which is defined below

An Ising model is ferromagnetic if Jijk≥0 for all triangle motifs (i,j,k) and hi≥0 for all i.

We introduce a intermediate message μM3(i) from a motif M3(i) to spin i.

In the literature, different works have different definitions of messages. μM3(i) is not the message definition we eventually work with in this paper, but it helps to understand the connections between different works. So, abusing the terminology a little bit, we call it ‘intermediate message’.

By the definition of generalized Belief Propagation, the probability that spin i is in a state Xi is determined by the normalized product of incoming intermediate messages from motifs attached to spin i and the external field factor eβhiXi,

where A is a normalization constant. And the belief update rule is given by:

where E(M3(i)) is an energy of the interaction among spins in the triangle M3(i), and B is a normalization constant.

Multiplying Equation (7) by Xi and summing over all spin configurations, we obtain an equation for the effective field λM3(i),

Now, define a message from a spin i to motif M3(i) as νi→M3(i)=tanh(λM3(i)). More specifically, if the motif M3(i) is a triangle (i,j,k), the message can be alternatively represented as νi→M3(i)=νi→jk=tanh(λM3(i)). From now on, let the reciprocal temperature β=1, we can further simplify Equation (8) as

where ∂i denotes the motifs attached to spin i. Equation (12) is the consistency equation for fixed point hyper-edge messages ν∗i→jk of the generalized belief propagation. Alternatively, we denote Equation (12) as νi→jk=ϕ(ν)i→jk.

In order to get the Bethe free energy of our higher order Ising model (3), we need to go through the Gibbs variational principle as Yedidia et al. [16] did for standard Ising models with pairwise interactions. Let P∗ be a joint distribution defined by our model (4). If we have some approximate joint distribution P, from Gibbs variational principle, we can write Gibbs free energy as

where U(P) is called the average energy, and S(P) is the entropy.

Because we only consider external fields and higher order interactions with triangles in our model, the one-node and three-node beliefs are actually sufficient to determine the average energy. For our model (3) and for any approximate joint probability P such that one-node marginal probabilities are Pi(xi) and the three-node marginal probabilities are Pijk(xi,xj,xk), the average energy will have the form

The average energy computed with the true marginal probabilities P∗i(xi) and P∗ijk(xi,xj,xk) will also have this form, so if one-node and three-node beliefs are exact, the average energy given by Equation (16) will be exact.

For computing the entropy, we usually need an approximation. We can compute the entropy exactly if we can explicitly express the joint distribution P(x) in terms of the one-node and three-node beliefs. If our graph were tree-like hyper-graph with triangle motifs only (see Fig. 0(b)

as an example), we can in fact do that. In that case, we can represent the joint probability distribution in the form

where qi is the hyper-degree of node i.

Using Equation (17), we get the Bethe approximation to the entropy as

Combining Equation (16) and (3), we obtain the Bethe free energy

We can derive the BP equations from the first-order optimality conditions for the aforementioned optimization problem. In other words, we can verify that a set of beliefs gives a BP fixed point in any hyper-graph if and only if they are stationary points of the Bethe free energy for the generalized BP. To see this, we need to add Lagrange multipliers to GBethe(P) to form a Lagrangian L. Let λi→jk(xi) be a multiplier that enforces the marginalization constraint ∑xj,xkPijk(xi,xj,xk)=Pi(xi), and λi be a multiplier that enforces the normalization of Pi(xi). So, the largrangian corresponding to the optimization problem is

where we ignore the constraints Pi(xi),Pijk(xi,xj,xk)≥0 because, given other constraints, those constraints are always satisfied at a critical point.

Setting λ′i→jk=λi→jk(1)−λi→jk(−1)2, we find that at a critical point of the Lagrangian that

And the equation ∂L∂Pi(xi)=0 gives:

Setting λ′i→jk=λi→jk(1)−λi→jk(−1)2, we find that at a critical point of the Lagrangian that

Furthermore, by differentiating with respect to λ, we see that the marginalization constraints are satisfied. Therefore, for any triangle (i,j,k), ∑xj,xkPijk(xi,xj,xk)=Pi(xi). Hence,

which is the BP consistency equation (12) we derived in Section 2.

where Zijk is a normalization constant Zijk=∑xi,xj,xkef(X). Substitute it back into Equation (47), we have

If we use the definition νi→jk:=tanh(λ′i→jk), and define θijk=tanh(Jijk), we have the following corollary:

Now, we can study the behavior of the Bethe free energy at critical points. The following lemma establishes that ϕ(ν)i→jk is a concave monotone function for some non-negative ν.

which proves monotonicity, and

Note that for any non-negative vector

We define the set of pre-fixpoints and post-fixpoints messages similar as in [6]:

From Lemma 2, we know Spost is a convex set, while Spre is typically non-convex and even disconnected. Next, we show the gradient of the dual Bethe free energy is well-behaved on these sets:

The lemma will follow if we compute the gradient of the dual Bethe free energy function G∗Bethe(ν).

Recall ϕ(ν)i→jk is the updated message from spin i to motif {j,k} based on the current messages ν. If ν∈Spre or Spost, then the signs of the gradient of Bethe free energy are determined by Equation (4) as claimed. ∎

Based on Lemma 2 and 3, we can prove our main theorem.

If there is at least one fixed point in [x∗,1)n, and the initialization is ν(0)i→jk=1 for all hyper-edges {i</