This paper is concerned with the convergence of a series associated with a certain version of the convexification method. That version has been recently developed by the research group of the first author for solving coefficient inverse problems. The convexification method aims to construct a globally convex Tikhonov-like functional with a Carleman Weight Function in it. In the previous works the construction of the strictly convex weighted Tikhonov-like functional assumes a truncated Fourier series (i.e. a finite series instead of an infinite one) for a function generated by the total wave field. In this paper we prove a convergence property for this truncated Fourier series approximation. More precisely, we show that the residual of the approximate PDE obtained by using the truncated Fourier series tends to zero in L^2 as the truncation index in the truncated Fourier series tends to infinity. The proof relies on a convergence result in the H^1-norm for a sequence of L^2-orthogonal projections on finite-dimensional subspaces spanned by elements of a special Fourier basis. However, due to the ill-posed nature of coefficient inverse problems, we cannot prove that the solution of that approximate PDE, which results from the minimization of that Tikhonov-like functional, converges to the correct solution. 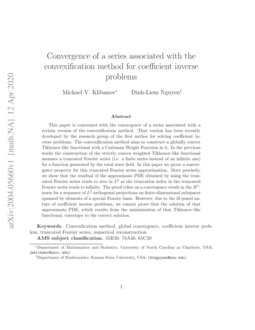 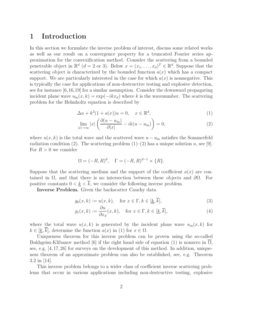 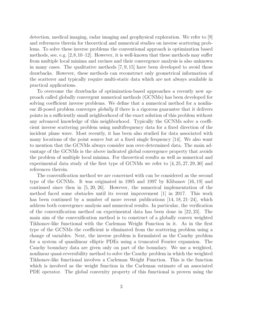 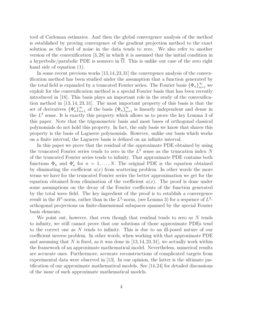 In this section we formulate the inverse problem of interest, discuss some related works as well as our result on a convergence property for a truncated Fourier series approximation for the convexification method. Consider the scattering from a bounded penetrable object in Rd (d=2 or 3). Below x=(x1,…,xd)T∈Rd. Suppose that the scattering object is characterized by the bounded function a(x) which has a compact support. We are particularly interested in the case for which a(x) is nonnegative. This is typically the case for applications of non-destructive testing and explosive detection, see for instance [6, 19, 16] for a similar assumption. Consider the downward propagating incident plane wave uin(x,k)=exp(−ikxd) where k is the wavenumber. The scattering problem for the Helmholtz equation is described by

where u(x,k) is the total wave and the scattered wave u−uin satisfies the Sommerfeld radiation condition (2). The scattering problem (1)–(2) has a unique solution u, see [9]. For R>0 we consider

Suppose that the scattering medium and the support of the coefficient a(x) are contained in Ω, and that there is no intersection between these objects and ∂Ω. For positive constants 0<k––<¯¯¯k, we consider the following inverse problem.

Uniqueness theorem for this inverse problem can be proven using the so-called Bukhgeim-Klibanov method [6] if the right hand side of equation (1) is nonzero in ¯¯¯¯Ω, see, e.g. [4, 26, 17] for surveys on the development of this method. In addition, uniqueness theorem of an approximate problem can also be established, see, e.g. Theorem 3.2 in [14].

This inverse problem belongs to a wider class of coefficient inverse scattering problems that occur in various applications including non-destructive testing, explosive detection, medical imaging, radar imaging and geophysical exploration. We refer to [9] and references therein for theoretical and numerical studies on inverse scattering problems. To solve these inverse problems the conventional approach is optimization based methods, see, e.g. [2, 8, 11, 12, 10]. However, it is well-known that these methods may suffer from multiple local minima and ravines and their convergence analysis is also unknown in many cases. The qualitative methods [7, 15, 9] have been developed to avoid these drawbacks. However, these methods can reconstruct only geometrical information of the scatterer and typically require multi-static data which are not always available in practical applications.

To overcome the drawbacks of optimization-based approaches a recently new approach called globally convergent numerical methods (GCNMs) has been developed for solving coefficient inverse problems. We define that a numerical method for a nonlinear ill-posed problem converges globally if there is a rigorous guarantee that it delivers points in a sufficiently small neighborhood of the exact solution of this problem without any advanced knowledge of this neighborhood. Typically the GCNMs solve a coefficient inverse scattering problem using multifrequency data for a fixed direction of the incident plane wave. Most recently, it has been also studied for data associated with many locations of the point source but at a fixed single frequency [14]. We also want to mention that the GCNMs always consider non over-determined data. The main advantage of the GCNMs is the above indicated global convergence property that avoids the problem of multiple local minima. For theoretical results as well as numerical and experimental data study of the first type of GCNMs we refer to [4, 25, 30, 27, 29] and references therein.

The convexification method we are concerned with can be considered as the second type of the GCNMs. It was originated in 1995 and 1997 by Klibanov [19, 16] and continued since then in [5, 26, 20]. However, the numerical implementation of the method faced some obstacles until its recent improvement [1] in 2017. This work has been continued by a number of more recent publications [23, 22, 18, 24, 21, 14], which address both convergence analysis and numerical results. In particular, the verification of the convexification method on experimental data has been done in [23, 22]

. The main aim of the convexification method is to construct of a globally convex weighted Tikhonov-like functional with the Carleman Weight Function in it. As in the first type of the GCNMs the coefficient is eliminated from the scattering problem using a change of variables. Next, the inverse problem is formulated as the Cauchy problem for a system of quasilinear elliptic PDEs using a truncated Fourier expansion. The Cauchy boundary data are given only on part of the boundary. We use a weighted, nonlinear quasi-reversibility method to solve the Cauchy problem in which the weighted Tikhonov-like functional involves a Carleman Weight Function. This is the function which is involved as the weight function in the Carleman estimate of an associated PDE operator. The global convexity property of this functional is proven using the tool of Carleman estimates. And then the global convergence analysis of the method is established by proving convergence of the gradient projection method to the exact solution as the level of noise in the data tends to zero. We also refer to another version of the convexification

[3, 28] in which it is assumed that the initial condition in a hyperbolic/parabolic PDE is nonzero in ¯¯¯¯Ω. This is unlike our case of the zero right hand side of equation (1).

In some recent previous works [14, 13, 23, 31] the convergence analysis of the convexification method has been studied under the assumption that a function generated by the total field is expanded by a truncated Fourier series. The Fourier basis {Φn}∞n=1 we exploit for the convexification method is a special Fourier basis that has been recently introduced in [18]. This basis plays an important role in the study of the convexification method in [14, 13, 23, 31]. The most important property of this basis is that the set of derivatives {Φ′n}∞n=1 of the basis {Φn}∞n=1 is linearly independent and dense in the L2 sense. It is exactly this property which allows us to prove the key Lemma 3 of this paper. Note that the trigonometric basis and most bases of orthogonal classical polynomials do not hold this property. In fact, the only basis we know that shares this property is the basis of Laguerre polynomials. However, unlike our basis which works on a finite interval, the Laguerre basis is defined on an infinite interval.

In this paper we prove that the residual of the approximate PDE obtained by using the truncated Fourier series tends to zero in the L2 sense as the truncation index N of the truncated Fourier series tends to infinity. That approximate PDE contains both functions Φn and Φ′n for n=1,…,N. The original PDE is the equation obtained by eliminating the coefficient a(x) from scattering problem. In other words the more terms we have for the truncated Fourier series the better approximation we get for the equation obtained from elimination of the coefficient a(x). The proof is done under some assumptions on the decay of the Fourier coefficients of the function generated by the total wave field. The key ingredient of the proof is to establish a convergence result in the H1-norm, rather than in the L2-norm, (see Lemma 3) for a sequence of L2-orthogonal projections on finite-dimensional subspaces spanned by the special Fourier basis elements.

The paper is structured as follows. The second section is dedicated to the formulation of the inverse problem as an approximate quasilinear elliptic PDE system. The convergence result for the truncated Fourier approximation is presented in Section 3.

The inverse problem can be approximately formulated as a Cauchy problem for a system of quasilinear elliptic PDEs. This formulation is one of the key ingredients for the convexification method. In this section we present this formulation for the convenience of readers. The idea is to eliminate the coefficient a(x) from the scattering problem and use truncated expansion of a special Fourier basis of L2(k––,¯¯¯k). For k0=(k––+¯¯¯k)/2 the following Fourier basis of L2(k––,¯¯¯k) was introduced in [18]

We may obtain an orthonormal basis {Φn}∞n=1

by applying the Gram–Schmidt process to

Now making a change of variables

and substituting in (1) we have

Differentiation of (8) with respect to k leads to

are the Fourier coefficients. Substituting these truncated series (10) in (9) we obtain

We multiply the above equation by Φm(k) and integrate with respect to k over [k––,¯¯¯k]

To solve problem (14)–(16), a weighted globally strictly convex Tikhonov-like functional is constructed in each of the works [14, 13, 23, 31], where the weight is the Carleman Weight Function for the Laplace operator and the number N is fixed. Then, the analytical study in each of these references results in global convergence theorems of the gradient projection method of the minimization of that functional. However, the latter is not a concern of this publication. Rather we focus on the convergence issue of the residual of the equation (11).

In this section we will prove that under certain assumption on the decay of the Fourier coefficients of the function v(x,k) and its derivatives the equation (9) is actually well approximated by the approximate equation (11) in the L2 sense if N is large enough.

where D is an invertible triangular matrix. Let N∈N. We define

where the coefficients un are given by

We first recall a result in Fourier approximation.

The next lemma aims to estimate the derivative of an element in TN.

For any w∈TN we have

Remark. The assumption (20) of the next lemma requires a fast decay of the Fourier coefficients that will be applied for the function v(x,k) in (9) and some of its derivatives in x. This assumption is not really a strong restriction since v(x,k) is a smooth function in k and its Fourier coefficients are indeed observed to have a fast decay in numerical simulations, see, e.g., [14, 31]. The numerical implementation of the convexification method in these cited papers only needs N=4 in the truncated Fourier series (10).

We now prove the key lemma for the result in this section.

Note that wn=0 for n>N and the infinite series in the last inequality above converges because of our assumption for the lemma. Since this is true for any w∈TN, setting ~w=w′ and using the fact TN=span{Φ′1,…,Φ′N} we have

This is a Hilbert space with the inner product

It is obvious that u which satisfies the assumption of the lemma belongs to H. Now from (21) we have

We can see that PN is also an orthogonal projection from H to TN. Therefore using the assumption that |un|≤C/nβ we obtain

The next theorem is the main result of this paper.

and furthermore, for f∈{∂xjv,Δv}, f satisfies

It is easy to see that hN∈L2(Ω×(k––,¯¯¯k)) following the assumption of the lemma. Rewriting it as

and making a subtraction from h we obtain

We do some algebra for the nonlinear terms. Set

Then gN can be written as

From the dominated convergence theorem and Lemma 3 we obtain

Similarly, for hN, we have