We prove the convergence of a damped Newton's method for the nonlinear system resulting from a discretization of the second boundary value problem for the Monge-Ampere equation. The boundary condition is enforced through the use of the notion of asymptotic cone. For the differential operator we use a discretization which is based on a partial discrete analogue of the subdifferential. 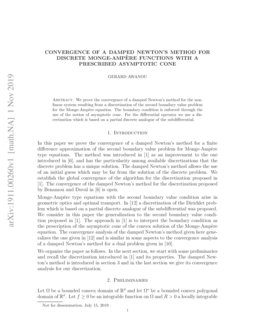 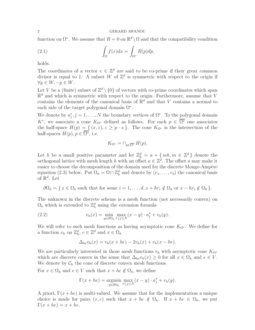 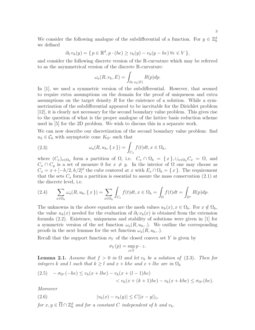 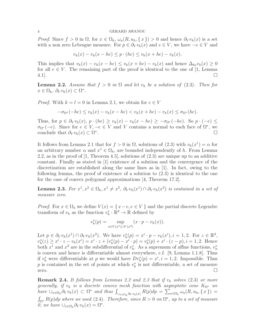 In this work we propose a natural discretization of the second boundary ...
Gerard Awanou, et al. ∙

In this note we prove that the version of Newton algorithm with line sea...
Denis Zorin, et al. ∙

In this paper, two numerical approaches based on the Newton iteration me...
Amir Hosein Hadian-Rasanan, et al. ∙

In this paper, we extend a dual-mixed formulation for a nonlinear genera...
Sergio Gonzalez-Andrade, et al. ∙

Monge-Ampère type equations with the second boundary value condition arise in geometric optics and optimal transport. In [12] a discretization of the Dirichlet problem which is based on a partial discrete analogue of the subdifferential was proposed. We consider in this paper the generalization to the second boundary value condition proposed in [1]. The approach in [1] is to interpret the boundary condition as the prescription of the asymptotic cone of the convex solution of the Monge-Ampère equation. The convergence analysis of the damped Newton’s method given here generalizes the one given in [12] and is similar in some aspects to the convergence analysis of a damped Newton’s method for a dual problem given in [10].

We organize the paper as follows. In the next section, we start with some preliminaries and recall the discretization introduced in [1] and its properties. The damped Newton’s method is introduced in section 3 and in the last section we give its convergence analysis for our discretization.

The coordinates of a vector

e∈Zd are said to be co-prime if their great common divisor is equal to 1. A subset W of Zd is symmetric with respect to the origin if ∀y∈W,−y∈W.

Let V be a (finite) subset of Zd∖{0} of vectors with co-prime coordinates which span Rd and which is symmetric with respect to the origin. Furthermore, assume that V contains the elements of the canonical basis of Rd and that V contains a normal to each side of the target polygonal domain Ω∗.

Let h be a small positive parameter and let Zdh=a+{mh,m∈Zd} denote the orthogonal lattice with mesh length h with an offset a∈Zd. The offset a may make it easier to choose the decomposition of the domain used for the discrete Monge-Ampère equation (2.3) below. Put Ωh=Ω∩Zdh and denote by (r1,…,rd) the canonical basis of Rd. Let

We will refer to such mesh functions as having asymptotic cone KΩ∗. We define for a function vh on Zdh, e∈Zd and x∈Ωh

A priori, Γ(x+he) is multi-valued. We assume that for the implementation a unique choice is made for pairs (x,e) such that x+he∉Ωh. If x+he∈Ωh, we put Γ(x+he)=x+he.

We consider the following analogue of the subdifferential of a function. For y∈Zdh we defined

In [1], we used a symmetric version of the subdifferential. However, that seemed to require extra assumptions on the domain for the proof of uniqueness and extra assumptions on the target density R for the existence of a solution. While a symmetrization of the subdifferential appeared to be inevitable for the Dirichlet problem [12], it is clearly not necessary for the second boundary value problem. This gives rise to the question of what is the proper analogue of the lattice basis reduction scheme used in [5] for the 2D problem. We wish to discuss this in a separate work.

We can now describe our discretization of the second boundary value problem: find uh∈Ch with asymptotic cone KΩ∗ such that

where (Cx)x∈Ωh form a partition of Ω, i.e. Cx∩Ωh={x},∪x∈ΩhCx=Ω, and Cx∩Cy is a set of measure 0 for x≠y. In the interior of Ω one may choose as Cx=x+[−h/2,h/2]d the cube centered at x with Ex∩Ωh={x}. The requirement that the sets Cx form a partition is essential to assure the mass conservation (2.1) at the discrete level, i.e.

The unknowns in the above equation are the mesh values uh(x),x∈Ωh. For x∉Ωh, the value uh(x) needed for the evaluation of ∂Vvh(x) is obtained from the extension formula (2.2). Existence, uniqueness and stability of solutions were given in [1] for a symmetric version of the set function ωa(R,uh,.). We outline the corresponding proofs in the next lemmas for the set function ωa(R,uh,.).

for x,y∈¯¯¯¯Ω∩Zdh and for a constant C independent of h and vh.

It follows from Lemma 2.1 that for f>0 in Ω, solutions of (2.3) with vh(x1)=α for an arbitrary number α and x1∈Ωh, are bounded independently of h. From Lemma 2.2, as in the proof of [1, Theorem 4.5], solutions of (2.3) are unique up to an additive constant. Finally as stated in [1] existence of a solution and the convergence of the discretization are established along the same lines as in [1]. In fact, owing to the following lemma, the proof of existence of a solution to (2.3) is identical to the one for the case of convex polygonal approximations [4, Theorem 17.2].

For x∈Ωh we define V(x)={x−e,e∈V} and the partial discrete Legendre transform of vh as the function v∗h:Rd→R defined by

We first give a general convergence result, the assumptions of which are then verified in the next section for our discretization. We are interested in the zeros of a mapping G:U→RM with G(vh)=(Gi(vh))i=1,…,M. We let ||.|| denote a norm in RM and put

for a parameter ϵ>0 to be specified later. We assume that G∈C1(Uϵ,RM) for all ϵ>0. The current iterate is denoted vkh and the following iterate is sought along the path

The general convergence result for damped Newton’s methods is analogous to [10, Proposition 6.1]

where maps with values probability measures are considered. Therein, the map

G is assumed to be in C1,α,0<α≤1. For G to be merely C1, as in certain geometric optics problems, and with detG′(x)≠0 for all x∈Uϵ, one has linear convergence [8]. For completeness we adapt the proof of [8] to the case where the domain of the mapping G is an open set of RM. As with [12, Proposition 2.10] we will assume that the mapping G is proper, i.e. the preimage of any compact set is a compact set.

Since G∈C1(U2ϵ,RM), we can find a constant L (depending on ϵ) such that

Part 1: The damped Newton’s method is well defined. We first note that it follows from the definitions that for all τ∈[0,1] we have

If such a τ′k does not exist, there would exist a sequence τl converging to 0 such that

Now we show that it is not possible to have η≠0. Assume that η>0.

This implies that η=0, a contradiction.

The linear convergence of Newton’s method for C1 mappings is classical but is nethertheless reviewed here. Let now vk+1h=vkh−G′(vkh)−1G(vkh) and put ekh=vkh−uh.

4. Convergence of the damped Newton’s method for the discretization

Let M denote the cardinality of Ωh and denote the points of Ωh by xi,i=1,…,M.

The set of discrete convex mesh functions on Ωh which satisfy (2.2), and with vh(x1)=α for an arbitrary number α and x1∈Ωh, can be identified with a subset U of RM−1. We consider a map G:U→RM−1 defined by

We now make the assumption that