In convergence analysis of finite element methods for singularly perturbed reaction–diffusion problems, balanced norms have been successfully introduced to replace standard energy norms so that layers can be captured. In this article, we focus on the convergence analysis in a balanced norm on Bakhvalov-type rectangular meshes. In order to achieve our goal, a novel interpolation operator, which consists of a local weighted L^2 projection operator and the Lagrange interpolation operator, is introduced for a convergence analysis of optimal order in the balanced norm. The analysis also depends on the stabilities of the L^2 projection and the characteristics of Bakhvalov-type meshes. Furthermore, we obtain a supercloseness result in the balanced norm, which appears in the literature for the first time. This result depends on another novel interpolant, which consists of the local weighted L^2 projection operator, a vertices-edges-element operator and some corrections on the boundary. 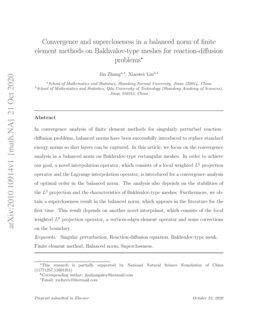 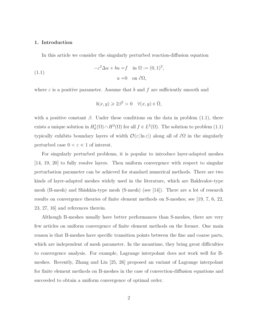 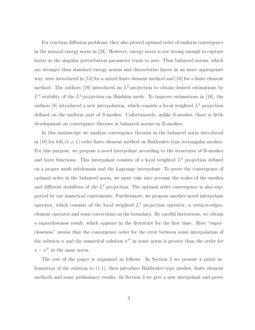 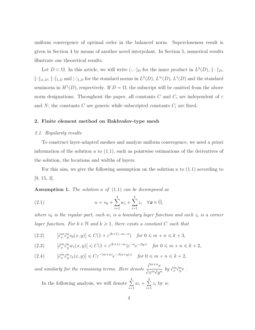 In this article we consider the singularly perturbed reaction-diffusion equation

where ε is a positive parameter. Assume that b and f are sufficiently smooth and

with a positive constant β. Under these conditions on the data in problem (1.1), there exists a unique solution in H10(Ω)∩H2(Ω) for all f∈L2(Ω). The solution to problem (1.1) typically exhibits boundary layers of width O(ε|lnε|) along all of ∂Ω in the singularly perturbed case 0<ε≪1 of interest.

Although B-meshes usually have better performances than S-meshes, there are very few articles on uniform convergence of finite element methods on the former. One main reason is that B-meshes have specific transition points between the fine and coarse parts, which are independent of mesh parameter. In the meantime, they bring great difficulties to convergence analysis. For example, Lagrange interpolant does not work well for B-meshes. Recently, Zhang and Liu Zhan1Liu2:2020-Optimal ; Zhan1Liu2:2021-Supercloseness proposed an variant of Lagrange interpolant for finite element methods on B-meshes in the case of convection-diffusion equations and succeeded to obtain a uniform convergence of optimal order.

For reaction-diffusion problems, they also proved optimal order of uniform convergence in the natural energy norm in Zhan1Liu2:2020-Convergence . However, energy norm is not strong enough to capture layers as the singular perturbation parameter tends to zero. Thus balanced norms, which are stronger than standard energy norms and characterize layers in an more appropriate way, were introduced in Lin1Styn2:2012-balanced for a mixed finite element method and Roos1Scho2:2015-Convergence for a finite element method. The authors Roos1Scho2:2015-Convergence introduced an L2

-projection to obtain desired estimations by

L∞-stability of the L2-projection on Shishkin mesh. To improve estimations in Roos1Scho2:2015-Convergence , the authors Fran1Roos2:2019-Error introduced a new interpolation, which consists a local weighted L2 projection defined on the uniform part of S-meshes. Unfortunately, unlike S-meshes, there is little development on convergence theories in balanced norms on B-meshes.

In this manuscript we analyze convergence theories in the balanced norm introduced in Roos1Scho2:2015-Convergence for kth (k≥1) order finite element method on Bakhvalov-type rectangular meshes. For this purpose, we propose a novel interpolant according to the structures of B-meshes and layer functions. This interpolant consists of a local weighted L2 projection defined on a proper mesh subdomain and the Lagrange interpolant. To prove the convergence of optimal order in the balanced norm, we must take into account the scales of the meshes and different stabilities of the L2 projection. The optimal order convergence is also supported by our numerical experiments. Furthermore, we propose another novel interpolant operator, which consists of the local weighted L2 projection operator, a vertices-edges-element operator and some corrections on the boundary. By careful derivations, we obtain a supercloseness result, which appears in the literature for the first time. Here “supercloseness” means that the convergence order for the error between some interpolation of the solution u and the numerical solution uN in some norm is greater than the order for u−uN in the same norm.

The rest of the paper is organized as follows. In Section 2 we present a priori information of the solution to (1.1), then introduce Bakhvalov-type meshes, finite element methods and some preliminary results. In Section 3 we give a new interpolant and prove uniform convergence of optimal order in the balanced norm. Supercloseness result is given in Section 4 by means of another novel interpolant. In Section 5, numerical results illustrate our theoretical results.

Let D⊂Ω. In this article, we will write (⋅,⋅)D for the inner product in L2(D), ∥⋅∥D, ∥⋅∥∞,D, ∥⋅∥1,D and |⋅|1,D for the standard norms in L2(D), L∞(D), L1(D) and the standard seminorm in H1(D), respectively. If D=Ω, the subscript will be omitted from the above norm designations. Throughout the paper, all constants C and Ci are independent of ε and N; the constants C are generic while subscripted constants Ci are fixed.

To construct layer-adapted meshes and analyze uniform convergence, we need a priori information of the solution u to (1.1), such as pointwise estimations of the derivatives of the solution, the locations and widths of layers.

The solution u of (1.1) can be decomposed as

where v0 is the regular part, each wi is a boundary layer function and each zi is a corner layer function. For k∈N and k≥1, there exists a constant C such that

and similarly for the remaining terms. Here denote ∂m+nv∂xm∂yn by ∂mx∂nyv .

In the following analysis, we will denote 4∑i=1wi+4∑i=1zi by w.

where σ will be defined later and d1, d2 are used to ensure the continuity of ψ(t) at t=1/4 and t=3/4. The second Bakhvalov-type mesh is introduced in Kopteva:1999-the ; Kopt1Save2:2011-Pointwise and its mesh generating function is

Assume that ε≤min{β4σ,1}N−1 in our analysis. In practice it is not a restriction.

For technical reasons, we also assume

The mesh points are xi=yi=ψ(i/N) or xi=yi=φ(i/N) for i=0,1,…,N. By drawing lines parallel to the axis through mesh points {(xi,yj)}, we obtain a Bakhvalov-type rectangular mesh with equidistant cells in the coarse region Ω0=(xN/4,x3N/4)2 and anisotropic cells in the layer region Ω∖Ω0. The triangulation is denoted by TN. Denote by τi,j for the element [xi,xi+1]×[yj,yj+1] and by τ for a generic rectangular element, which dimensions are written as hx,τ and hy,τ. Define hi:=xi+1−xi=yi+1−yi for 0≤i≤N−1.

In the following lemma, we collect some important properties possessed by Bakhvalov-type meshes, which are important for convergence analysis. The reader is referred to Zhan1Liu2:2020-Optimal for the detailed proof.

Now we present the finite element method for problem (1.1). First, the weak form of problem (1.1) is written as

The bilinear form a(⋅,⋅) is coercive with respect to this energy norm, i.e.,

From the Lax-Milgram lemma, the weak formulation (2.14) has a unique solution.

Also, it is easy to very the coercivity

and the Galerkin orthogonality

Clearly, the balanced norm ∥⋅∥b is stronger than the energy norm ∥⋅∥ε in the case of 0<ε≪1. Furthermore, the former is better suited to capture of layers. For example, for a typical layer function e−x/ε, ∥e−x/ε∥ε and ∥e−x/ε∥b are of order O(ε1/2) and of order O(1), respectively. These orders imply that the balanced norm ∥⋅∥b is more appropriate to capture layers than the energy norm ∥⋅∥ε when 0<ε≪1. The reader is also referred to Roos1Scho2:2015-Convergence ; Con1Fra2Lud3etc:2018-Finite for discussions on these two norms.

For convergence analysis in the balanced norm, we will present an interpolation operator, which components will be introduced at first.

Denote by I the Langrange interpolation operator from C0(¯Ω) to VN. Furthermore, define χ∈VN0 by

Recall w=4∑i=1wi+4∑i=1zi. Then the interpolation used in convergence analysis is defined by

The following lemma provides some pointwise bounds for errors between the Lagrange interpolant and the L2 projection.

For v0 introduced in Assumption 1, one has

Furthermore, from tensor product we could easily obtain

The error u−uN is split as follows:

In the following analysis, we give the estimations on each term in the right-hand side of (3.5).

Our arguments are based on the following splitting

From the definition of π, we obtain

To analyze S1, we need the following bounds

which could be derived from standard interpolation theories and Lemma 2. Then we obtain

In order to derive the supercloseness result in the balanced norm, we need another novel interpolant, which will be described in the following.

Instead of Langrange interpolant operator used in the previous section, we introduce an vertices-edges-element interpolation operator A:C0(¯Ω)→VN (see Lin1Yan2Zho3:1991-rectangle ; Styn1Tobi2:2008-Using ). This interpolant is used for superconvergence analysis of the diffusion term. First we define the interpolant operator on the reference element ^τ=(−1,1)2, whose vertices and edges are denoted by ^ai and ^ei respectively for i=1,…,4. Let ^v(⋅,⋅)∈C(¯¯¯^τ). The operator ^A:C(¯¯¯^τ)→Qk(^τ) is determined by (k+1)2 continuous linear functionals ^F:C(¯¯¯^τ)→R, which are defined by

Besides, we denote by Fdegree of freedom (DoF) of VN, which originates from the linear functional ^F.