In this paper, we made an extension to the convergence analysis of the dynamics of two-layered bias-free networks with one ReLU output. We took into consideration two popular regularization terms: the ℓ_1 and ℓ_2 norm of the parameter vector w, and added it to the square loss function with coefficient λ/2. We proved that when λ is small, the weight vector w converges to the optimal solution ŵ (with respect to the new loss function) with probability ≥ (1-ε)(1-A_d)/2 under random initiations in a sphere centered at the origin, where ε is a small value and A_d is a constant. Numerical experiments including phase diagrams and repeated simulations verified our theory. 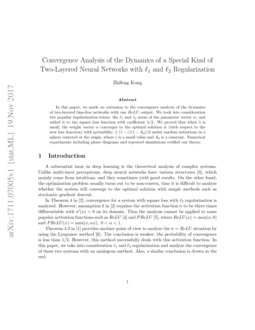 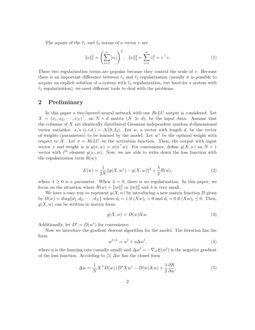 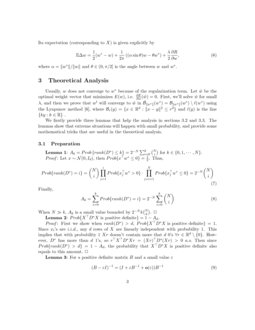 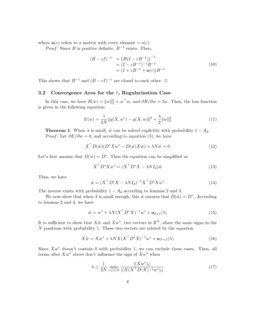 A substantial issue in deep learning is the theoretical analysis of complex systems. Unlike multi-layer perceptrons, deep neural networks have various structures

, which mainly come from intuitions, and they sometimes yield good results. On the other hand, the optimization problem usually turns out to be non-convex, thus it is difficult to analyze whether the system will converge to the optimal solution with simple methods such as stochastic gradient descent.

In Theorem 4 in [2], convergence for a system with square loss with ℓ2 regularization is analyzed. However, assumption 6 in [2]

σ to be three times differentiable with σ′(x)>0 on its domain. Thus the analysis cannot be applied to some popular activation functions such as ReLU [4] and PReLU [5], where ReLU(x)=max(x,0) and PReLU(x)=max(x,αx), 0<α<1.

Theorem 3.3 in [1] provides another point of view to analyze the σ=ReLU situation by using the Lyapunov method [6]. The conclusion is weaker: the probability of convergence is less than 1/2. However, this method successfully deals with this activation function. In this paper, we take into consideration ℓ1 and ℓ2 regularization and analyze the convergence of these two systems with an analogous method. Also, a similar conclusion is drawn in the end.

In this paper a two-layered neural network with one ReLU output is considered. Let X=(x1,x2,⋯,xN)⊤, an N×d matrix (N≫d), be the input data. Assume that the columns of X are identically distributed Gaussian independent random d-dimensional vector variables: xi’s (i.i.d.) ∼N(0,Id). Let w, a vector with length d, be the vector of weights (parameters) to be learned by the model. Let w∗ be the optimal weight with respect to X. Let σ=ReLU be the activation function. Then, the output with input vector x and weight w is g(x,w)=σ(x⊤w). For convenience, define g(X,w) an N×1 vector with ith element g(xi,w). Now, we are able to write down the loss function with the regularization term R(w):

where λ≥0 is a parameter. When λ=0, there is no regularization. In this paper, we focus on the situation where R(w)= ∥w∥21 or ∥w∥22 and λ is very small.

Now we introduce the gradient descent algorithm for the model. The iteration has the form

where η is the learning rate (usually small) and Δwt=−∇wE(wt) is the negative gradient of the loss function. According to [1] Δw has the closed form

Its expectation (corresponding to X) is given explicitly by

We firstly provide three lemmas that help the analysis in sections 3.2 and 3.3. The lemmas show that extreme situations will happen with small probability, and provide some mathematical tricks that are useful in the theoretical analysis.

Lemma 3: For a positive definite matrix B and a small value ε

where o(ε) refers to a matrix with every element =o(ε).

Proof: Since B is positive definite, B−1 exists. Then,

In this case, we have R(w)=∥w∥22=w⊤w, and ∂R/∂w=2w. Then, the loss function is given in the following equation:

Theorem 1: When λ is small, ^w can be solved explicitly with probability 1−Ad.

Let’s first assume that D(^w)=D∗. Then the equation can be simplified as

The inverse exists with probability 1−Ad according to lemmas 2 and 3.

We now show that when λ is small enough, this ^w ensures that D(^w)=D∗. According to lemmas 2 and 3, we have

It is sufficient to show that X^w and Xw∗, two vectors in RN, share the same signs in the N positions with probability 1. These two vectors are related by the equation

Since Xw∗ doesn’t contain 0 with probability 1, we can exclude these cases. Then, all terms after Xw∗ above don’t influence the sign of Xw∗ when

The ”2” on the denominator is used for eliminating the effects of oN×1(λ). □

Now, we have shown that ^w is closed to w∗ when λ is small. The next step is to show that w converges to ^w in a certain area, which the Lyapunov method [6] is very good at. In order to apply the Lyapunov method, we regard t as a continuous index.

Theorem 2: With probability 1−Ad, the following statement holds. When N is large and λ is small, consider the Lyapunov function V(w)=12∥w−^w∥2. We have ˙V(=∂V/∂t)<0 in ^B∥w∗∥(w∗), and thus the system is asymptotically stable. That is, w=wt→^w as t→∞.

Proof: We can write ˙V as:

In order to simplify, let ^w=w∗+λT, where T is given by

P can also be divided into two parts: P=P1+P2, where

In this case, we have R(w)=∥w∥21, and ∂R/∂w=2∥w∥1sign(w), where sign(w) is the vector of signs of elements in w. Then, the loss function is given in the following equation:

Theorem 3: When λ is small, ^w can be solved (not explicitly) with probability 1−Ad.

We still assume that D∗=D(^w) to simplify the problem. Then, the equation becomes

This problem is hard to solve, so we use the Implicit Function Theorem [7] here. The key is to examine whether the Jacobian matrix J is invertible, where J(i,j)=∂fi/∂^wj. The result is

Since X⊤D∗X is positive definite with probability 1−Ad according to Lemma 2, and when λ is small the second term doesn’t influence, we know that J is then invertible. Thus, there exists a unique continuously differentiable function g such that ^w=g(w∗,λ) is the solution. Notice that when λ=0, ^w=w∗ is the solution. As a result, ^w=g(w∗,λ) can be extended as w∗+λu+od×1(λ) for some vector u. Additionally, u might be very large because there is an N after λ in equations (24)-(26).

Then, we show that for λ small, we have D(^w)=D∗. The analysis is quite similar to Theorem 1. When

Remark: In Theorem 3 the bound of λ is given in equation (27), where there is an unknown vector u on the denominator (Xu)i

. In fact, we are able to estimate its value from known quantities. When we apply the extension

which is equivalent to the following equation

As assumed in Theorem 3, rankD∗=δ>d, and assume that D∗ii=1 for i=1,2,⋯,δ. Let Xδ be the matrix consisting the first δ rows of X. Then, X⊤D∗Xu=X⊤δXδu. Thus, we have

for small λ such that ∥^w∥1≤(2−ϵ)∥w∗∥1 with small value ϵ that eliminates the effect of o(1) in equation (31). Finally, we are able to modify the bound in equation (27) by using the upper bound of (Xu)i in equation (32) to substitute this amount. The explicit bound is then given by the following equation:

Although the explicit solution of ^w can’t be found, we still draw the conclusion that ^w is closed to w∗ for small λ. This is enough for the Lyapunov method, because we are able to control K in equation (20) with a similar way.

Theorem 4: The statement in Theorem 2 still holds for ℓ1 regularization.

Proof: Similar to the analysis in Theorem 2, we still have equation (20) in this case with a different P. Thus, when λ is small enough K is positive definite, and the conclusion is still correct here. □

Proof: The proof is almost exactly the same as the proof of Theorem 7.4 in [1]. The only thing to notice is that we exclude the line ℓ(w∗) because we need θ>0. However, the line has measure zero and thus doesn’t change the conclusion. □

Now, we have proved that Theorem 3.3 in [1] still applies for ℓ1 and ℓ2 regularization with small λ. And this result is consistent with the argument that initial weights should be small rather than being large [8].

First, in Figure 1 we demonstrate all possibilities: the dynamics converge/do not converge with ℓ1/ℓ2 regularization. The parameters are: N=10,d=2,η=0.05,ε=0.1, and λ=0.01(for cases with convergence),0.1(for cases that % without convergence). In Figure 2 we show two phase diagrams (or vector fields, after normalized) of the dynamics with ℓ1 and ℓ2 regularization with randomly selected X and parameters N=10,d=2, and λ=0.01. The big black point is w∗=(1,1), the small black points are the grid points uniformly selected in the plane, and green lines refer to the orientations of δw (from the end with a black point to the end without any point). Especially, when w equals to (0,0) in the ℓ1 case the dynamic is meaningless because ∂R/∂w does not exist.

Then, in order to examine the prediction given by Theorem 5, we made the following simulation. Under different values of N, d and λ, we simulated the dynamics for 500 times and compared the experiment ratio of convergence to the theoretical ratio (that is, the probability) of convergence in Theorem 5. Specifically, for both ℓ1 and ℓ2 situation N was selected in {10,20,100}, d was selected in {2,3,5}, and λ was selected in {0.001,0.01,0.1}. The learning rate η was set to be 0.05 and ε was set to be 0.1. Each time X

was sampled according to normal distribution and

w1 was sampled uniformly in B0(r). The results for the ℓ1 and ℓ2 regularization case are demonstrated in Table 1.

According to Table 1, we are able to make the following discussion. (i) As shown in the table, there are four bold numbers, all of which lie in the ℓ2 regularization case when λ=0.1, indicating that for the ℓ2 situation 0.1 is beyond the upper bound of λ for Theorem 1 or Theorem 2. (ii) In most situations, the experiment ratio of convergence decreases as λ increases, and the gap between λ=0.1 and 0.01 is much larger than the gap between λ=0.01 and 0.001, which implies that λ also plays an important role in the convergence probability in Theorem 5. (iii) In most cases the experiment ratio is much larger than the theoretical ratio. This indicates that outside the sphere ^B∥w∗∥(w∗) in Theorem 2 and Theorem 4 there is still much area in which the initial weights will converge to w∗. (iv) Under the same parameters, the experiment ratio of convergence in the ℓ1 case is always greater than that in the ℓ2 case. This shows that the ℓ1 regularization makes the dynamic easier to converge than the ℓ2 regularization does.

In this paper, we presented our convergence analysis of the dynamics of two-layered bias-free networks with one ReLU output, where the loss function includes the square error loss and ℓ1 or ℓ2 regularization on the weight vector. This is an extension to Theorem 3.3 in [1]. We first solved the optimal weight vector ^w with small regularization coefficient for both cases, and then used the Lyapunov method [6] to show that the system is asymptotically stable in certain area. In the final step, we claimed that Theorem 3.3 in [1] is still correct in these two situations. We also verified our theory through numerical experiments including plotting the phase diagrams and making computer simulations.

Our work made a theoretical justification of convergence for two popular models. We started from the intuition that small regularization doesn’t change the system too much, and our conclusion is compatible with this intuition. In the future, we plan to analyze the system with larger regularization, since in real situations λ is fixed to be, for example, 0.5, which may be larger than the bound in equations (17) and (27). This is more difficult since we won’t expect D∗=D(^w), and other advanced techniques may be applied. We also plan to consider other popular regularization terms, and provide a more general theory on this topic.