Multigrid is a popular iterative solver for a large class of linear systems that arise from discretized partial differential equations. Typically, it is a recursive call of two-grid procedure and hence can be treated as an inexact two-grid scheme. In this paper, we present a systematic convergence analysis of standard multigrid methods based on the inexact two-grid theory developed by Xu and Zhang (2020). Two alternating combinations of the V-cycle and W-cycle multigrid methods are also analyzed. More specifically, we establish new upper bounds for the convergence factor of multigrid methods in a purely algebraic manner. Moreover, our analysis allows the coarsest-grid problem to be solved approximately. 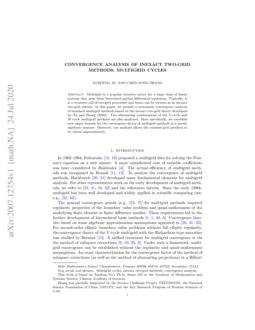 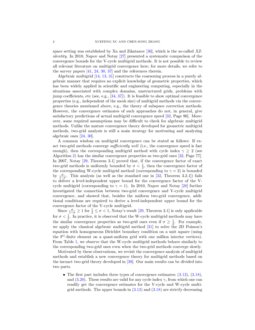 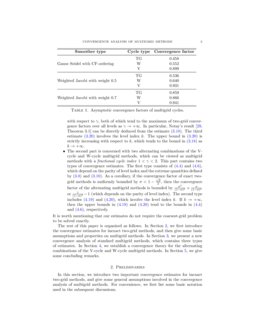 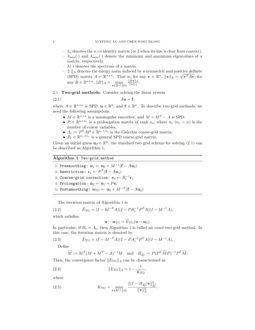 In 1962–1964, Fedorenko [18, 19] proposed a multigrid idea for solving the Poisson’s equation on a unit square. A more complicated case of variable coefficients was later considered by Bakhvalov [4]. The actual efficiency of multigrid methods was recognized by Brandt [11, 12]. To analyze the convergence of multigrid methods, Hackbusch [20, 21] developed some fundamental elements for multigrid analysis. For other representative work on the early development of multigrid methods, we refer to [23, 41, 16, 32] and the references therein. Since the early 1980s, multigrid has been well developed and widely applied in scientific computing (see, e.g., [32, 34]).

The general convergence proofs (e.g., [22, 7]) for multigrid methods required regularity properties of the boundary value problem and quasi-uniformness of the underlying finite element or finite difference meshes. These requirements led to the further development of hierarchical basis methods [5, 1, 40, 6]. Convergence theories based on some algebraic approximation assumptions appeared in [26, 31, 25]. For second-order elliptic boundary value problems without full elliptic regularity, the convergence theory of the V-cycle multigrid with the Richardson-type smoother was studied by Brenner [15]. A unified treatment for multigrid convergence is via the method of subspace corrections [9, 10, 35, 8]. Under such a framework, multigrid convergence can be established without the regularity and quasi-uniformness assumptions. An exact characterization for the convergence factor of the method of subspace corrections (as well as the method of alternating projections) in a Hilbert space setting was established by Xu and Zikatanov [36], which is the so-called XZ-identity. In 2010, Napov and Notay [27] presented a systematic comparison of the convergence bounds for the V-cycle multigrid methods. It is not possible to review all relevant literature on multigrid convergence here; for more details, we refer to the survey papers [41, 24, 30, 37] and the references therein.

Algebraic multigrid [14, 13, 31] constructs the coarsening process in a purely algebraic manner that requires no explicit knowledge of geometric properties, which has been widely applied in scientific and engineering computing, especially in the situations associated with complex domains, unstructured grids, problems with jump coefficients, etc (see, e.g., [34, 37]

). It is feasible to show optimal convergence properties (e.g., independent of the mesh size) of multigrid methods via the convergence theories mentioned above, e.g., the theory of subspace correction methods. However, the convergence estimates of such approaches do not, in general, give satisfactory predictions of actual multigrid convergence speed

[32, Page 96]. Moreover, some required assumptions may be difficult to check for algebraic multigrid methods. Unlike the mature convergence theory developed for geometric multigrid methods, two-grid analysis is still a main strategy for motivating and analyzing algebraic ones [24, 30].

Since σ1−σ≥1 for 12≤σ<1, Notay’s result [29, Theorem 3.1] is only applicable for σ<12. In practice, it is observed that the W-cycle multigrid methods may have the similar convergence properties as two-grid ones even if σ≥12. For example, we apply the classical algebraic multigrid method [31] to solve the 2D Poisson’s equation with homogeneous Dirichlet boundary condition on a unit square (using the P1-finite element on a quasi-uniform grid with one million interior vertices). From Table 1, we observe that the W-cycle multigrid methods behave similarly to the corresponding two-grid ones even when the two-grid methods converge slowly.

It is worth mentioning that our estimates do not require the coarsest-grid problem to be solved exactly.

In this section, we introduce two important convergence estimates for inexact two-grid methods, and give some general assumptions involved in the convergence analysis of multigrid methods. For convenience, we first list some basic notation used in the subsequent discussions.

Given an initial guess u0∈Rn, the standard two-grid scheme for solving (2.1) can be described as Algorithm 1.

The iteration matrix of Algorithm 1 is

In particular, if Bc=Ac, then Algorithm 1 is called an exact two-grid method. In this case, the iteration matrix is denoted by

Then, the convergence factor ∥ETG∥A can be characterized as

The following theorem presents more general estimates for the convergence factor of two-grid methods [39, Corollaries 3.10 and 3.18], from which one can readily get the identity (2.4).

Let α≥0 and β≥0. For Algorithm 1, if the coarse-grid matrix Bc satisfies that

Alternatively, if the coarse-grid matrix Bc satisfies that

The fundamental module of multigrid methods is the two-grid procedure described by Algorithm 1. To design a well converged two-grid method, it is not necessary to solve the coarse-grid problem exactly, especially when the problem size is still large. Instead, without essential loss of convergence speed, one can solve the coarse problem approximately. A natural idea (i.e., multigrid idea) is to apply the two-grid scheme recursively. This validates that multigrid can be regarded as an inexact two-grid scheme, which enables us to analyze multigrid convergence via inexact two-grid theory.

By recursively applying Algorithm 1 in the coarse-grid correction steps, one can obtain a multigrid algorithm. To describe the algorithm concisely, we give some notation and assumptions.

Given an initial guess ˜uk∈Rnk, the standard multigrid method for solving the linear system Akuk=fk can be described as Algorithm 2. The symbols Smoothνk and MGγ in Algorithm 2 mean that the corresponding schemes will be carried out νk and γ iterations, respectively. In particular, γ=1 and γ=2 correspond to the V- and W-cycles, respectively (see Figure 1).

The iteration matrix of Algorithm 2 is

For brevity, we define an equivalent smoother Mk∈Rnk×nk by the relation

Due to Sk+STk−Ak is SPD, it follows that

Applying mathematical induction, we can deduce that A12k˜E(k)MGA−12k is symmetric and

As a result, ˜E(k)MG can be written as

Interchanging the roles of Mk and MTk in (2.14) yields another symmetrized smoother

Note that the coarse-grid matrix Bc in Algorithm 1 has to be SPD. From (3.1), we have

The quantities σ(k)TG and ˜σ(k)MG are referred to as the convergence factors of the exact two-grid method and the multigrid method at level k, respectively. According to the lower bound in (2.7) (or (2.9)), we deduce that

which reveals that a fast exact two-grid method is necessary for good convergence of the corresponding multigrid method.

Based on Theorem 2.1, we can derive the following upper bounds for ˜σ(k)MG.

The estimate (3.5) then follows from the relation

An application of (2.9) yields

In what follows, we establish three types of convergence estimates for Algorithm 2 based on Lemma 3.2. For convenience, we define

3.1. Estimate of the first kind

which, together with the positive semidefiniteness of ˜Mk−Ak, lead to the assumptions in the following lemma.

Obviously, Fγ(x) is a continuous function in (0,1). Direct computations yield

Let xγ∈(σL,1−εL) be a root of Fγ(x)=0. Note that Fγ(x)+x is a strictly increasing function with respect to x. We then have

Using (3.5) and Lemma 3.3, we can derive the following convergence estimate.

Let xγ be stated as in Lemma 3.3. If the coarsest-grid matrix ˜A0 in Algorithm 2 satisfies