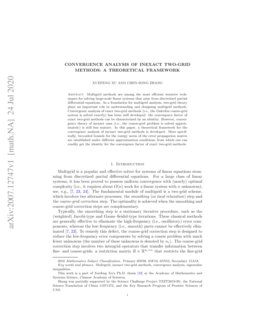 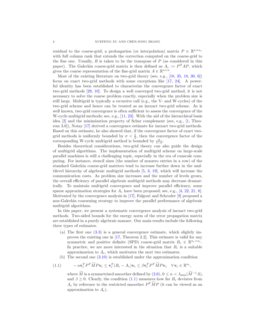 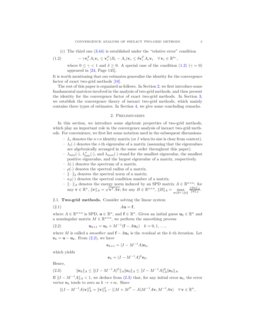 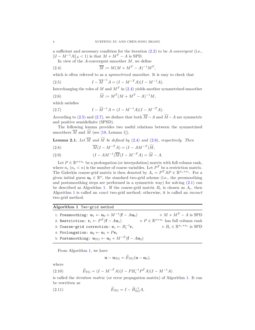 Multigrid is a popular and effective solver for systems of linear equations stemming from discretized partial differential equations. For a large class of linear systems, it has been proved to possess uniform convergence with (nearly) optimal complexity (i.e., it requires about O(n) work for a linear system with n unknowns); see, e.g., [7, 23, 24]. The fundamental module of multigrid is a two-grid scheme, which involves two alternate processes: the smoothing (or local relaxation) step and the coarse-grid correction step. The optimality is achieved when the smoothing and coarse-grid correction steps are complementary.

Typically, the smoothing step is a stationary iterative procedure, such as the (weighted) Jacobi-type and Gauss–Seidel-type iterations. These classical methods are generally effective to eliminate the high-frequency (i.e., oscillatory) error components, whereas the low-frequency (i.e., smooth) parts cannot be effectively eliminated [7, 23]. To remedy this defect, the coarse-grid correction step is designed to reduce the low-frequency error components by solving a coarse problem with much fewer unknowns (the number of these unknowns is denoted by nc). The coarse-grid correction step involves two intergrid operators that transfer information between fine- and coarse-grids: a restriction matrix R∈Rnc×n

that restricts the fine-grid residual to the coarse-grid; a prolongation (or interpolation) matrix

P∈Rn×nc with full column rank that extends the correction computed on the coarse-grid to the fine one. Usually, R is taken to be the transpose of P (as considered in this paper). The Galerkin coarse-grid matrix is then defined as Ac:=PTAP, which gives the coarse representation of the fine-grid matrix A∈Rn×n.

Most of the existing literature on two-grid theory (see, e.g., [10, 35, 18, 30, 6]) focus on exact two-grid methods with some exceptions like [17, 24]. A powerful identity has been established to characterize the convergence factor of exact two-grid methods [29, 10]. To design a well converged two-grid method, it is not necessary to solve the coarse problem exactly, especially when the problem size is still large. Multigrid is typically a recursive call (e.g., the V- and W-cycles) of the two-grid scheme and hence can be treated as an inexact two-grid scheme. As is well known, two-grid convergence is often sufficient to assess the convergence of the W-cycle multigrid methods; see, e.g., [11, 23]. With the aid of the hierarchical basis idea [2] and the minimization property of Schur complement (see, e.g., [1, Theorem 3.8]), Notay [17]

σ<12, then the convergence factor of the corresponding W-cycle multigrid method is bounded by σ1−σ.

Besides theoretical considerations, two-grid theory can also guide the design of multigrid algorithms. The implementation of multigrid scheme on large-scale parallel machines is still a challenging topic, especially in the era of exascale computing. For instance, stencil sizes (the number of nonzero entries in a row) of the standard Galerkin coarse-grid matrices tend to increase further down in the multilevel hierarchy of algebraic multigrid methods [5, 3, 19], which will increase the communication costs. As problem size increases and the number of levels grows, the overall efficiency of parallel algebraic multigrid methods may decrease dramatically. To maintain multigrid convergence and improve parallel efficiency, some sparse approximation strategies for Ac have been proposed; see, e.g., [4, 22, 21, 8]. Motivated by the convergence analysis in [17], Falgout and Schroder [8] proposed a non-Galerkin coarsening strategy to improve the parallel performance of algebraic multigrid algorithms.

In this paper, we present a systematic convergence analysis of inexact two-grid methods. Two-sided bounds for the energy norm of the error propagation matrix are established in a purely algebraic manner. Our main results include the following three types of estimates.

It is worth mentioning that our estimates generalize the identity for the convergence factor of exact two-grid methods [10].

In this section, we introduce some algebraic properties of two-grid methods, which play an important role in the convergence analysis of inexact two-grid methods. For convenience, we first list some notation used in the subsequent discussions.

where M is called a smoother and f−Auk is the residual at the k-th iteration. Let ek=u−uk. From (2.2), we have

In view of the A-convergent smoother M, we define

which is often referred to as a symmetrized smoother. It is easy to check that

Interchanging the roles of M and MT in (2.4) yields another symmetrized smoother

Let P∈Rn×nc be a prolongation (or interpolation) matrix with full column rank, where nc (nc<n) is the number of coarse variables. Let PT be a restriction matrix. The Galerkin coarse-grid matrix is then denoted by Ac=PTAP∈Rnc×nc. For a given initial guess u0∈Rn, the standard two-grid scheme (i.e., the presmoothing and postsmoothing steps are performed in a symmetric way) for solving (2.1) can be described as Algorithm 1. If the coarse-grid matrix Bc is chosen as Ac, then Algorithm 1 is called an exact two-grid method; otherwise, it is called an inexact two-grid method.

From Algorithm 1, we have

is called the iteration matrix (or error propagation matrix) of Algorithm 1. It can be rewritten as

Obviously, ˜BTG is an SPD matrix, which is called inexact two-grid preconditioner. From (2.11), we deduce that

The convergence theory of exact two-grid methods has been well studied in the literature. For readers interested in its algebraic analysis, we refer to [24, 13, 18] and the references therein.

For the special case Bc=Ac, we denote the iteration matrix by

It is easy to see that BTG is an SPD matrix, which is called exact two-grid preconditioner.

The following theorem gives an identity for the convergence factor of Algorithm 1 with Bc=Ac [10, Theorem 4.3], which is the so-called two-level XZ-identity [29, 35].

For a fixed smoother M (e.g., the weighted Jacobi or Gauss–Seidel smoother), an optimal interpolation can be obtained by minimizing KTG

. Unfortunately, the optimal interpolation is typically expensive to compute, because it requires explicit knowledge of eigenvectors corresponding to small eigenvalues of the eigenvalue problem

To maintain two-grid convergence and design an interpolation with simple structure, one can minimize an upper bound of KTG. Let Q=PˆR, where ˆR∈Rnc×n and ˆRP=Inc. Obviously, Q is a projection onto range(P). Then

By minimizing K over all interpolations, one can obtain the so-called ideal interpolation [9, 33], which provides new insights for designing an interpolation with sparse or simple structure (see, e.g., [15, 16, 33, 14]). In particular, if ˆR is taken to be (PT˜MP)−1PT˜M, then K=KTG. Hence, the ideal interpolation can be viewed as a “relaxation” of the optimal one. Furthermore, a quantitative relation between KTG and K can be found in [33].

In this section, we establish the convergence theory of inexact two-grid methods. More specifically, two-sided bounds for the energy norm of the iteration matrix are derived under different approximation conditions.

3.1. Convergence estimate of the first kind

The first estimate (see (3.3) below) is a general convergence result, which does not need any additional conditions on Bc except for its positive definiteness.

We first prove an important lemma, which gives two relations between the extreme eigenvalues of ˜B−1TGA and B−1TGA.

Analogously, it holds that

which are the results derived by Notay [17, Theorem 2.2]. It is worth noting that the specific form of Ac is not used in the proof of Lemma 3.1. As the results in [17], Ac here does not have to be the Galerkin-type.

which, together with (2.13), yield the following convergence estimate.

The convergence factor of Algorithm 1 satisfies that

The only assumption on the coarse-grid matrix Bc is its positive definiteness. Hence, the estimate (3.3) is valid for any SPD matrix Bc. Nevertheless, to design a well converged two-grid method, we are more interested in the situation that Bc is a suitable approximation to Ac. In what follows, we focus on the convergence analysis of Algorithm 1 under general approximation conditions. These conditions arise from measuring the difference between Bc and Ac.

3.2. Convergence estimate of the second kind

In light of (2.12), we can derive the following explicit expression for ˜BTG.

The inexact two-grid preconditioner ˜BTG can be expressed as

The relation (2.9) implies that

from which one can easily see that BTG−A is SPSD.

The following lemma provides some useful eigenvalue identities, which play an important role in the subsequent convergence analysis.

there exists a nonsingular matrix X∈Rn×n such that

We are now in a position to present the convergence estimate of the second kind, which is based on characterizing the difference Bc−Ac by reference to PT˜MP.

An application of (3.3) yields

In order to establish two-sided bounds for ∥˜ETG∥A, we need to estimate the extreme eigenvalues λmin(A−1˜BTG) and λmax(A−1˜BTG). By (3.4), we have