In this paper, we investigate the convergence performance of a cooperative diffusion Gauss-Newton (GN) method, which is widely used to solve the nonlinear least squares problems (NLLS) due to the low computation cost compared with Newton's method. This diffusion GN collects the diversity of temporalspatial information over the network, which is used on local updates. In order to address the challenges on convergence analysis, we firstly consider to form a global recursion relation over spatial and temporal scales since the traditional GN is a time iterative method and the network-wide NLLS need to be solved. Secondly, the derived recursion related to the networkwide deviation between the successive two iterations is ambiguous due to the uncertainty of descent discrepancy in GN update step between two versions of cooperation and non-cooperation. Thus, an important work is to derive the boundedness conditions of this discrepancy. Finally, based on the temporal-spatial recursion relation and the steady-state equilibria theory for discrete dynamical systems, we obtain the sufficient conditions for algorithm convergence, which require the good initial guesses, reasonable step size values and network connectivity. Such analysis provides a guideline for the applications based on this diffusion GN method. 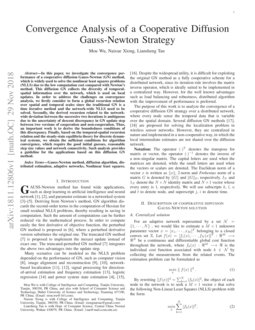 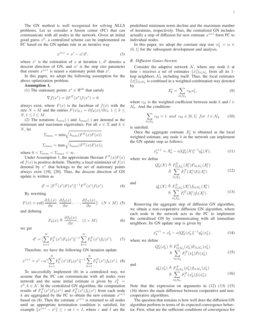 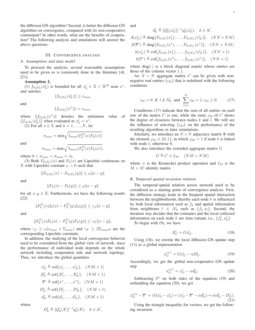 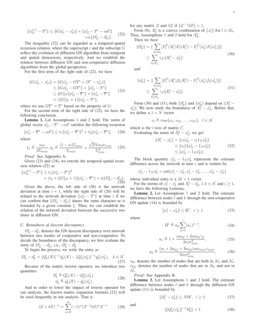 On the choice of initial guesses for the Newton-Raphson algorithm

On the Performance of Exact Diffusion over Adaptive Networks

Gauss-Newton method has found wide applications, such as deep learning in artificial intelligence and neural network

[1, 2], and parameter estimate in a networked system [3, 4, 5]. Deriving from Newton’s method, GN algorithm discards the second-order terms in the computation of Hessian for small residual NLLS problems, thereby resulting in saving in computation. Such the amount of computations can be further reduced via the mathematical process. In order to compute easily the first derivative of objective function, the perturbed GN method is proposed in [6], where a perturbed derivative version substitutes the original one. The truncated GN method [7] is proposed to implement the inexact update instead of exact one. The truncated-perturbed GN method [7] integrates the above two advantages into the update step.

Many scenarios can be modeled as the NLLS problem depended on the performance of GN, such as computer vision

[14] and power system state estimation [4, 15, 16]. Despite the widespread utility, it is difficult for exploiting the original GN method as a fully cooperative scheme for a distributed network, since its iteration rule involves the matrix inverse operator, which is ideally suited to be implemented in a centralized way. However, for the well known advantages such as load balancing and robustness, distributed algorithm with the improvement of performance is preferred.

The purpose of this work is to analyze the convergence of a cooperative diffusion GN strategy over a distributed network, where every node sense the temporal data that is variable over the spatial domain. Several diffusion GN methods [17, 18] are proposed for solving the localization problem in wireless sensor networks. However, they are centralized in nature and implemented in a non-cooperative way, in which the local intermediate estimates are not shared over the diffusion network.

denotes the transpose for matrix or vector, the operator

(⋅)−1 denotes the inverse of a non-singular matrix. The capital letters are used when the matrices are denoted, while the small letters are used when the vectors or scalars are denoted. The Euclidean norm of a vector x is written as ∥x∥, 2-norm and Frobenius norm of a matrix G is denoted by ∥G∥ and ∥G∥F, respectively. IN and \textmd1N denote the N×Nidentity matrix and N×1 vector whose every entry is 1, respectively. We will use subscripts k, l, u and t to denote node, and superscript j, i to denote time.

For an adaptive network represented by a set N={1,⋯,N} , we would like to estimate a M×1 unknown parameter vector x=[x1,⋯,xM]T belonging to a closed convex set X. Let f(x)=[f1(x),⋯,fN(x)]T:RM⟶RN be a continuous and differentiable global cost function throughout the network, where fk(x):RM⟶R is the individual cost function associated with node k∈N by collecting the measurements from the related events. The estimation problem can be formulated as

By rewriting ∥f(x)∥2=∑Nk=1|fk(x)|2, the object of each node in the network is to seek a M×1 vector x that solve the following Non-Linear Least Squares (NLLS) problem with the form

The GN method is well recognized for solving NLLS problems. Let us consider a fusion center (FC) that can communicate with all nodes in the network. Given an initial good guess x0, a centralized scheme can be implemented on FC based on the GN update rule in an iterative way

where xi is the estimation of x at iteration i, di denotes a descent direction of GN, and αi is the step size parameter that ensure xi+1 is nearer a stationary point than xi.

In this paper, we adopt the following assumption for the above optimization problem.

(1) The stationary points xs∈RM that satisfy

are denoted as the minimum and maximum eigenvalues. For all

Under Assumption 1, the approximate Hessian FT(x)F(x) of f(x) is positive definite. Thereby, a local minimizer of f(x) denoted by x∗ that belongs to the set of stationary points always exist [19, 20]. Thus, the descent direction of GN update is written as

Therefore, we have the following GN iteration update

To successfully implement (8) in a centralized way, we assume that the FC can communicate with all nodes over network and the same initial estimate is given by x0k=x0,k∈N. In the centralized GN algorithm, the computation results of FTk(xi)Fk(xi) and FTk(xi)fk(xi) from each node k are aggregated by the FC to obtain the new estimate xi+1 based on (8). Then the estimate xi+1 is returned to all nodes until an appropriate termination condition is satisfied, for example ∥xi+1−xi∥≤ε or i=I, where ε and I are the predefined minimum norm decline and the maximum number of iterations, respectively. Thus, the centralized GN includes actually a step of diffusion for new estimate xi+1 form FC to individual nodes.

In this paper, we adopt the constant step size αik=α∈(0,1] for the subsequent development and analysis.

where ckl is the weighted coefficient between node k and l∈Nk. And the conditions

Once the aggregate estimate Xik is obtained as the local weighted estimate, any node k in the network can implement the GN update step as follows:

Note that the expression on arguments in (12) (13) (15) (16) shows the main difference between cooperative and non-cooperative algorithms.

To proceed the analysis, several reasonable assumptions need to be given as is commonly done in the literature [4, 21].

(1) fl∈Nk(xik) is bounded for all xik∈X⊂RM near x∗, and satisfies

for all x,y∈X. Furthermore, we have the following results [22]

In addition, the studying of the local convergence behavior need to be considered from the global view of network, since the performance of individual node depends on the whole network including cooperation rule and network topology. Thus, we introduce the global quantities

where diag(⋅) is a block diagonal matrix whose entries are those of the column vector {⋅}.

Conditions (17) indicate that the sum of all entries on each row of the matrix C is one, while the entry ckl of C shows the degree of closeness between nodes k and l. We will see the influence of selecting {ckl} on the performance of the resulting algorithms in later simulations.

Similarly, we introduce an N×N adjacency matrix Φ with the element φkl∈{0,1}, in which φkl=1 if node k is linked with node l; otherwise 0.

where ⊗ is the Kronecker product operation and IM is the M×M identity matrix.

The temporal-spatial relation across network need to be considered as a starting point of convergence analysis. First, the diffusion strategy leads to the frequent spatial interaction between the neighborhoods, thereby each node k is influenced by both local information such as fk and spatial information from neighbours l∈Nk such as {fl,xl}. Second, the iteration way decides that the estimates and the local collected information on each node k are time-variant, i.e., {fik,xik}.

Using (18), we rewrite the local diffusion GN update step (11) as a global representation

Accordingly, we get the global non-cooperative GN update step

Using the triangle inequality for vectors, we get the following recursion

The inequality (22) can be regarded as a temporal-spatial recursion relation, where the superscript i and the subscript G reflect the evolution of diffusion GN algorithm from temporal and spatial dimensions, respectively. And we establish the relation between diffusion GN and non-cooperative diffusion algorithms from the global perspective.

For the second term of the right side of (22), we have the following conclusion.

DiG−diG denotes the GN descent discrepancy over network between two modes of cooperative and non-cooperative. To decide the boundness of the discrepancy, we first evaluate the entry of DiG−diG, i.e., Dik−dik.

To begin the process, we write the entry as

Because of the matrix inverse operator, we introduce two quantities

And in order to lower the impact of inverse operator for our analysis, the known matrix expansion formula [21] will be used frequently in our analysis. That is

which is the l row of matrix C.

Evaluating the norm of Xil−xik, we get

whose individual entry is a M×1 vector.

For the norms of xil−xik and Xil−xik, l,k∈N and i≥1, we have the following Lemmas.

Lemma 2. Let Assumptions 1 and 2 hold. The estimate difference between nodes l and k through the non-cooperative GN update (14) is bounded by

Lemma 3. Let Assumptions 1 and 2 hold. The estimate difference between nodes l and k through the diffusion GN update (11) is bounded by

always holds under the sufficient condition

The condition (39) means that any two nodes k and l in the network have at least one common neighboring node, which is more likely to be achieved by a small and dense network. However, the condition can be relaxed in practice by allowing that all nodes are linked over single-hop or multi-hops so that it holds for the large scale networks. Thus, it is reasonable that the sufficient condition ∥[Qik(xik)]−1Sik∥<1 for applying the expansion formula in (27) always holds under Lemma 2.

Thus, we use the expansion formula (29) and the norm operator on (27) as follows

Finally, we obtain the boundness conclusion as follows

Giving the constant ξ that satisfies (41), we rewrite the global recursion relation (26) as

which can be regarded as a nonlinear discrete dynamical system. Let yi≜∥xiG−¯¯¯x∗∥, we will simplify notation of (42) with the general form

whose steady-state equilibrium is a level [23] that solves

Solving (44), we get two steady-state equilibrium points as follows

Thus, we know that ymax is unstable since

while ymin can be stable if

from (50), we get the following constraints