We present a hybrid ML-heuristic approach that we name "Heuristically Assisted Deep Reinforcement Learning (HA-DRL)" to solve the problem of Network Slice Placement Optimization. The proposed approach leverages recent works on Deep Reinforcement Learning (DRL) for slice placement and Virtual Network Embedding (VNE) and uses a heuristic function to optimize the exploration of the action space by giving priority to reliable actions indicated by an efficient heuristic algorithm. The evaluation results show that the proposed HA-DRL algorithm can accelerate the learning of an efficient slice placement policy improving slice acceptance ratio when compared with state-of-the-art approaches that are based only on reinforcement learning. 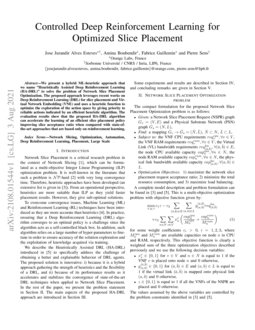 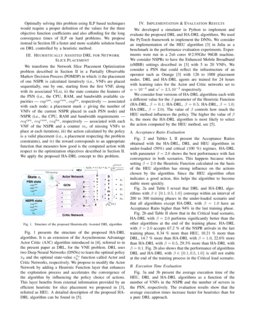 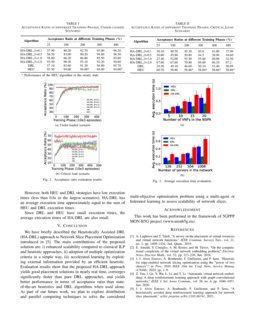 , which can be formulated as a multi-objective Integer Linear Programming (ILP) optimization problem. It is well-known in the literature that such a problem is

NP-hard [3] with very long convergence time. Therefore, heuristic approaches have been developed (an extensive list is given in [1]). From an operational perspective, heuristics are more suitable than ILP as they yield faster placement results. However, they give sub-optimal solutions.

To overcome convergence issues, Machine Learning (ML) and Reinforcement Learning (RL) techniques have been introduced as they are more accurate than heuristics

[5]. In practice, ensuring that a Deep Reinforcement Learning (DRL) algorithm converges to an optimal policy is a challenge since the algorithm acts as a self-controlled black box. In addition, such algorithm relies on a large number of hyper-parameters to fine-tune in order to ensure accuracy of the solution exploration and the exploitation of knowledge acquired via training.

We describe the Heuristically Assisted DRL (HA-DRL) introduced in [2] to specifically address the challenge of obtaining a better and explainable behavior of DRL agents. The proposed solution is innovative: i) because it is a hybrid approach gathering the strength of heuristics and the flexibility of a DRL, and ii) because of its performance results as it accelerates and stabilizes the convergence of state-of-the-art DRL techniques when applied to Network Slice Placement. In the rest of the paper, we present the problem statement in Section II. The main aspects of the proposed HA-DRL approach are introduced in Section III.

Some experiments and results are described in Section IV, and concluding remarks are given in Section V.

The compact formulation for the proposed Network Slice Placement Optimization problem is as follows:

A complete model description and problem formulation can be found in [1] and [2]. This is a multi-objective optimization problem with objective function given by:

for some weight coefficients ci>0, i=1,2,3, where Mcpun and Mramn are available capacities on node n in CPU and RAM, respectively. This objective function is clearly a weighted sum of the three optimization objectives described previously and we use the following decision variables:

The values assumed by the above variables are controlled by the problem constraints identified in [1] and [2].

Optimally solving this problem using ILP based techniques would require a proper definition of the values for the three objective function coefficients and also affording for the long convergence times of ILP on hard problems. We propose instead in Section III a faster and more scalable solution based on DRL controlled by a heuristic method.

in a Partially Observable Markov Decision Process (POMDP) in which: i) the placement of one NSPR is calculated iteratively (i.e., VNFs are placed sequentially, one by one, starting from the first VNF, along with its associated VLs), ii) the state contains the features of the PSN (i.e., the CPU, RAM, and bandwidth available capacities —

capcpu, capram, capbw, respectively — associated with each node; a placement mask x giving the number of VNFs of the current NSPR placed in each PSN node) and NSPR (i.e., the CPU, RAM and bandwidth requirements — reqcpu, reqram, reqbw, respectively — associated with each VNF of the NSPR and a counter mv of missing VNFs to place at each iteration), iii) the action calculated by the policy is a valid placement (i.e., a placement respecting the problem constraints), and iv) the reward corresponds to an appropriate function that measures how good is the computed action with respect to the optimization objectives described in Section II. We apply the proposed HA-DRL concept to this problem.

Fig. 1 presents the structure of the proposed HA-DRL algorithm. It is an extension of the Asynchronous Advantage Actor Critic (A3C) algorithm introduced in [5]

, referred to in the present paper as DRL, for the VNE problem. DRL uses two Deep Neural Networks (DNNs) to learn the optimal policy

πθ and the optimal state-value νπθθv function called Actor and Critic Networks, respectively. We propose to modify the Actor Network by adding a Heuristic Function layer that enhances the exploration process and accelerates the convergence of the algorithm by influencing the policy choice of actions. This layer benefits from external information provided by an efficient heuristic for slice placement we proposed in [1], referred as HEU. A detailed description of the proposed HA-DRL algorithm can be found in [2].

We developed a simulator in Python to implement and evaluate the proposed DRL and HA-DRL algorithms. We used the PyTorch framework to implement the DNNs. We consider an implementation of the HEU algorithm

[1] in Julia as a benchmark in the performance evaluation experiments. Experiments were run in a 2x6 cores @2.95Ghz 96GB machine. We consider NSPRs to have the Enhanced Mobile Broadband (eMBB) settings described in [1] with 5 to 20 VNFs. We consider a PSN that could reflect the infrastructure of an operator such as Orange [1] with 126 to 1008 placement nodes. DRL and HA-DRL agents are trained for 24 hours with learning rates for the Actor and Critic networks set to α=10−4 and α′=2.5.10−3 respectively.

Fig. 2 and Tables I, II present the Acceptance Ratios obtained with the HA-DRL, DRL and HEU algorithms in under-loaded (50%) and critical (100 %) regimes. HA-DRL with parameter β=2.0 shows the best performance with fast convergence in both scenarios. This happens because when setting β=2.0 the Heuristic Function calculated on the basis of the HEU algorithm has strong influence on the actions chosen by the algorithm. Since the HEU algorithm often indicates a good action, this helps the algorithm to become stable more quickly.

Fig. (a)a and Table I reveal that DRL and HA-DRL algorithms with β∈{0.1,0.5,1.0} converge within an interval of 200 to 300 training phases in the under-loaded scenario and that all algorithms except HA-DRL with β=1.0 have an Acceptance Ratio higher than 94% in the last training phase.

We have briefly described the Heuristically Assisted DRL (HA-DRL) approach to Network Slice Placement Optimization introduced in [2]. The main contributions of the proposed solution are: i) enhanced scalability compared to classical ILP and heuristic approaches, ii) adoption of multiple optimization criteria in a simple way, iii) accelerated learning by exploiting external information provided by an efficient heuristic. Evaluation results show that the proposed HA-DRL approach yields good placement solutions in nearly real time, converges significantly faster than pure DRL approaches, and yields better performance in terms of acceptance ratio than state-of-the-art heuristics and DRL algorithms when used alone. As part of our future work, we plan to explore distribution and parallel computing techniques to solve the considered multi-objective optimization problem using a multi-agent or federated learning to assess scalability of network slices.

This work has been performed in the framework of 5GPPP MON-B5G project (www.monb5g.eu).