With the increased applications of automatic speech recognition (ASR) in recent years, it is essential to automatically insert punctuation marks and remove disfluencies in transcripts, to improve the readability of the transcripts as well as the performance of subsequent applications, such as machine translation, dialogue systems, and so forth. In this paper, we propose a Controllable Time-delay Transformer (CT-Transformer) model that jointly completes the punctuation prediction and disfluency detection tasks in real time. The CT-Transformer model facilitates freezing partial outputs with controllable time delay to fulfill the real-time constraints in partial decoding required by subsequent applications. We further propose a fast decoding strategy to minimize latency while maintaining competitive performance. Experimental results on the IWSLT2011 benchmark dataset and an in-house Chinese annotated dataset demonstrate that the proposed approach outperforms the previous state-of-the-art models on F-scores and achieves a competitive inference speed. 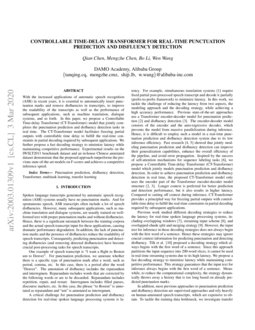 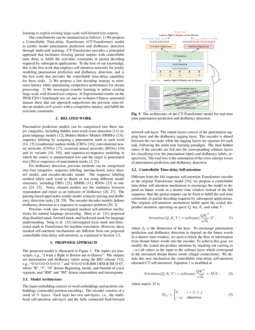 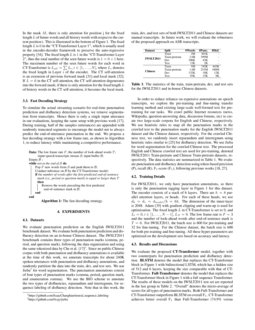 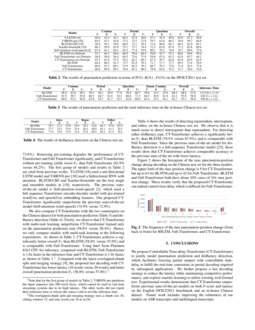 One example of speech transcript is “I want a flight to Boston um to Denver”. For punctuation prediction, we annotate whether there is a specific type of punctuation mark after a word, such as period, comma, etc. In this case, there is a period after the word “Denver”. The annotation of disfluency includes the reparandum and interregnum. Reparandum includes words that are corrected by the following words or are to be discarded. Reparandum includes repetition, repair, and restart. Interregnum includes filled pauses, discourse markers, etc. In this case, the phrase “to Boston” is annotated as reparandum and “um” is annotated as interregnum.

Previous work studied different decoding strategies to reduce the latency for real-time spoken language processing systems, including overlapping windows [7], streaming input scheme [8], and overlapped-chunk split and merging strategy [9]. However, the input text for inference in these decoding strategies does not always begin with the first word of a sentence. Hence these strategies may ignore crucial context information for predicting punctuation and detecting disfluency. Tilk et al. [10] proposed a decoding strategy which always begins with the first word of a sentence. Since this approach partitions the input sequence into 200-word slices, it cannot be used in real-time streaming systems due to its high latency. We propose a fast decoding strategy to minimize latency while maintaining competitive performance. This strategy guarantees that the input text for inference always begins with the first word of a sentence. Meanwhile, to reduce the computational complexity, the strategy dynamically throws away a history that is too long based on already predicted punctuation marks.

In addition, most previous approaches to punctuation prediction and disfluency detection are supervised approaches and rely heavily on human-annotated speech transcripts, which are expensive to obtain. To tackle the training data bottleneck, we investigate transfer learning to exploit existing large-scale well-formed text corpora.

Our contributions can be summarized as follows: 1) We propose a Controllable Time-delay Transformer (CT-Transformer) model to jointly model punctuation prediction and disfluency detection through multi-task learning. CT-Transformer provides a principled approach that facilitates freezing partial outputs with controllable time delay to fulfill the real-time constraints in partial decoding required by subsequent applications. To the best of our knowledge, this is the first work that employs self-attention networks for jointly modeling punctuation prediction and disfluency detection, and is the first work that provides the controllable time-delay capability for these tasks. 2) We propose a fast decoding strategy to minimize latency while maintaining competitive performance for stream processing. 3) We investigate transfer learning to utilize existing large-scale well-formed text corpora. 4) Experimental results on the IWSLT2011 benchmark test set and an in-house Chinese annotated dataset show that our approach outperforms the previous state-of-the-art models on F-scores with a competitive latency, and fulfill the real-time constraints.

[18] and its variants [10, 19]), and sequence-to-sequence modeling in which the source is unpunctuated text and the target is punctuated text [20] or sequences of punctuation marks [2, 21].

For disfluency detection, previous methods can be categorized into four categories: sequence labeling, parsing-based, noisy channel model, and encoder-decoder model. The sequence labeling method labels each word as fluent or not using different model structures, including CRFs [22], HMMs [11], RNNs [23] or others [24, 25]. Noisy channel models use the similarity between reparandum and repair as an indicator of disfluency [26, 27]. The parsing-based approaches jointly model syntactic parsing and disfluency detection tasks [28, 29]. The encoder-decoder models defines disfluency detection as a sequence-to-sequence problem [30, 3].

The proposed model is illustrated in Figure 1. The inputs are transcripts, e.g., “I want a flight to Boston um to Denver”. The outputs are punctuation and disfluency labels using the BIO scheme [33], e.g., “O O O O O O O O .” and “O O O O B-RM I-RM B-IM O O”, where “B”, “I”, “O” denote Beginning, Inside, and Outside of a text segment, and “RM” and “IM” denote reparandum and interregnum.

layers. Each layer has two sub-layers, i.e., the multi-head self-attention sub-layer and the fully connected feed-forward network sub-layer. The output layers consist of the punctuation tagging layer and the disfluency tagging layer. The encoder is shared between the two tasks while the tagging layers are separate for each task, following the multi-task learning paradigm. The final hidden states of the encoder are fed into the corresponding softmax layers for classifying over the punctuation labels and disfluency labels, respectively. The total loss is the summation of the cross entropy losses of punctuation prediction and disfluency detection.

Different from the full sequence self-attention Transformer encoder in the original Transformer model [34], we propose a controllable time-delay self-attention mechanism to encourage the model to depend on future words in a shorter time window instead of the full sequence, thus the partial outputs can be fixed to fulfill the real-time constraints in partial decoding required by subsequent applications. The original self-attention mechanism builds upon the scaled dot-product attention, operating on query Q, key K, and value V:

where dk is the dimension of the keys. To encourage punctuation prediction and disfluency detection to depend on the future words in a shorter time window, we need to block the flow of information from distant future words into the encoder. To achieve this goal, we modify the scaled dot-product attention by masking out (setting to −∞) all values in the input to the softmax layer which correspond to the unwanted distant future words (illegal connections). We denote this new mechanism the controllable time-delay self-attention (denoted CT self-attention). Equation 1 is modified as

where matrix M is

To simulate the actual streaming scenario for real-time punctuation prediction and disfluency detection systems, we remove segmentation from transcripts. Hence there is only a single input utterance in our evaluations, keeping the same setup with previous work [17]. During training, half of the samples (utterances) are appended with randomly truncated segments to encourage the model not to always predict the end-of-utterance punctuation in the end. We propose a fast decoding strategy with a low frame rate, as shown in Algorithm 1, to reduce latency while maintaining a competitive performance.

We evaluate punctuation prediction on the English IWSLT2011 benchmark dataset. We evaluate both punctuation prediction and disfluency detection on an in-house Chinese dataset. The IWSLT2011 benchmark contains three types of punctuation marks (comma, period, and question mark), following the data organization and using the same tokenized data by Che et al. [17]111https://github.com/IsaacChanghau/neural_sequence_labeling. Since no public Chinese corpus with both punctuation and disfluency annotations is available at the time of this work, we annotate transcripts for about 240K spoken utterances with punctuation and disfluency annotations, and randomly partition the data into the train, dev, and test sets. We use Jieba222https://github.com/fxsjy/jieba for word segmentation. The punctuation annotations consist of four types of punctuation marks (comma, period, question mark, and enumeration comma). We use the BIO scheme to annotate the two types of disfluencies, reparandum and interregnum, for sequence labeling of disfluency detection. Note that in this work, the train, dev, and test sets of both IWSLT2011 and Chinese datasets are manual transcripts. In future work, we will evaluate the robustness of the proposed approach on ASR transcripts.

In order to reduce reliance on expensive annotations on speech transcripts, we explore the pre-training and fine-tuning transfer learning method and existing large-scale well-formed text for pre-training for our tasks. We crawl public Internet resources (news, Wikipedia, question-answering data, discussion forums, etc) to create two large-scale corpora for English and Chinese, respectively. We use heuristic rules to map all the punctuation marks in the crawled text to the punctuation marks for the English IWSLT2011 dataset and the Chinese dataset, respectively. For the crawled Chinese text, we randomly insert reparandum and interregnum using heuristic rules similar to

For IWSLT2011, we only have punctuation annotations, so there is only the punctuation tagging layer in Figure 1 for this dataset. The encoder consists of a stack of 6 layers. There are h=8 parallel attention layers, or heads. For each of these heads, we use dk=dv=dmodel/h=64. The dimension of the inner-layer is 2048. Adam [35]

with gradient clipping and warm-up is used for optimization. The fixed length

L in CT-Transformer is set to 9, and Li=0,i∈[1,…,N−1], LN=9. The low frame rate is F=3 and the number of look-ahead words after end-of-sentence mark is T=6. For IWSLT2011, the batch size is 600 for pre-training and 32 for fine-tuning. For the Chinese dataset, the batch size is 600 for both pre-training and fine-tuning. All these hyper-parameters are optimized on the development sets based on accuracy and latency.

We also compare CT-Transformer with the two counterparts on the Chinese dataset for both punctuation prediction (Table 3) and disfluency detection (Table 4). Firstly, we observe that CT-Transformer with multi-task learning outperforms CT-Transformer trained only on the punctuation prediction task (58.8% versus 58.4%). Hence, we only compare models with multi-task learning in the following experiments. As shown in Table 3, CT-Transformer achieves a significantly better overall F1 than BLSTM (58.8% versus 53.9%) and is comparable with Full-Transformer. Using Intel Xeon Platinum 8163 CPU for inference, compared with BLSTM, Full-Transformer is 1.6x faster in the inference time and CT-Transformer is 1.9x faster, as shown in Table 3 333Note that for the first group of models in Table 2, T-BRNN-pre partitions the input sequence into 200-word slices, which cannot be used in real-time streaming systems due to its high latency. The other works did not report their inference time or release the source code to test the inference time.. Compared with the latest overlapped-chunk split and merging strategy [9], the proposed fast decoding with CT-Transformer has lower latency (10 words versus 20 words) and better overall punctuation prediction F1 (58.8% versus 57.8%) 444The overlapped-chunk split and merging strategy uses a chunk size 30, sliding window 15, and min_words_cut 10 as in [9]..

Table 4 shows the results of detecting reparandum, interregnum, and either, on the in-house Chinese test set. We observe that it is much easier to detect interregnum than reparandum. For detecting either disfluency type, CT-Transformer achieves a significantly better F1 than BLSTM (70.5% versus 67.9%), and is comparable with Full-Transformer. Since the previous state-of-the-art model for disfluency detection is a full-sequence Transformer model [25], these results show that CT-Transformer achieves comparable accuracy to the previous state of the art with lower latency.