Although it is recently introduced, in last few years, generative adversarial network (GAN) has been shown many promising results to generate realistic samples. However, it is hardly able to control generated samples since input variables for a generator are from a random distribution. Some attempts have been made to control generated samples from GAN, but they have not shown good performances with difficult problems. Furthermore, it is hardly possible to control the generator to concentrate on reality or distinctness. For example, with existing models, a generator for face image generation cannot be set to concentrate on one of the two objectives, i.e. generating realistic face and generating difference face according to input labels. Here, we propose controllable GAN (CGAN) in this paper. CGAN shows powerful performance to control generated samples; in addition, it can control the generator to concentrate on reality or distinctness. In this paper, CGAN is evaluated with CelebA datasets. We believe that CGAN can contribute to the research in generative neural network models. 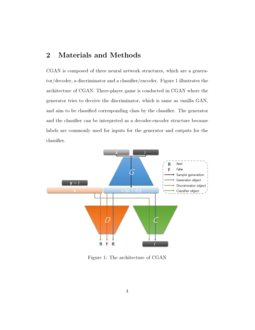 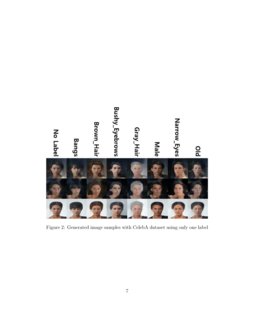 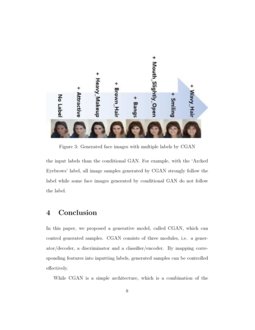 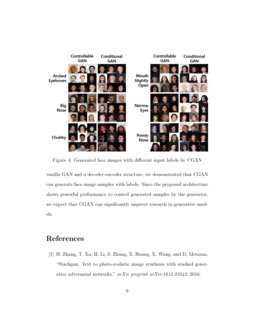 Generative Adversarial Network (GAN) is a neural network structure, which has been introduced for generating realistic samples. GAN consists of two modules, a generator and a discriminator. A generator produces fake samples from random noises, while a discriminator attempts to distinguish between these fake samples and real samples. The generator tries to deceive the discriminator by learning from errors which are the output of discriminator with fake samples. By such an adversarial and competitive learning, latent variables of the samples are mapped onto random variables which are the input of generators. After adequate learning iterations of such a process, the generator can generate realistic samples from random noises.

While it is introduced recently, GAN has shown many promising results not only for generating realistic samples (r1, ; r2, ; r3, ), but also for machine translation (r4, )

However, for generating realistic samples, we can hardly control the GAN because the random distribution is used for the input variables of generators. While vanilla GAN can generate realistic samples from a random noise, the relationship between inputs of the generator and features of generated samples is not obvious. In the last few years, there have been several attempts to control generated samples by GAN (r6, ; r7, ; r8, ; r9, ; r10, ). One of the most popular methods to control GAN is the conditional GAN (r10, ). Conditional GAN inputs labels into the generator and the discriminator so that they work under the conditions.

The current conditional GAN mainly focuses on generating realistic samples, rather than making difference between generated samples according to input labels. As results, it is difficult to generate samples with detailed features while conditional GAN is successful for major features. For example, with CelebA dataset (r11, ) which consists of 202,559 celebrity face images labeled with 40 different features, conditional GAN only works with major features, such as smiling or bangs. In order to make the generator work with detailed features, such as pointy nose or arched eyebrows, we have to control the generator to more focus on generating different samples according to input labels.

ControlGAN has two main advantages compared to existing models. First, ControlGAN can be trained to focus more on input labels so that ControlGAN can generate samples with detailed feature where conditional GAN can hardly generate. Second, ControlGAN uses an independent network for mapping the features into corresponding input labels while the discriminator conducts such a work in conditional GAN and other conditional variants of GAN (acgan, ). Consequently, the discriminator can more concentrate on its own objective, which is the discrimination between fake samples and original samples, so that the quality of generated samples can be enhanced.

2.1 A brief review of generative adversarial networks and its conditional variants

GAN is a neural network structure for learning to generate samples and mapping latent variables of a dataset. Given a dataset X={x1,...,xn} where x∈Rk, if the samples are not orthogonal to each other, latent variables z∈Rl<k exist. For example, for a face image dataset, latent variables can be the attribute of human faces, such as shape of face, sharpness of nose, and color of eyes.

However, since the relation between generated samples and input variables is not obvious, the generated samples cannot be controlled as we desire to. For example, we cannot control GAN to generate face image samples of a smiling old woman having blond hair; we have to select the face images from randomly generated samples when we use vanilla GAN. To address such a problem, conditional variants of GAN have been studied.

2.2 The limitation of conditional GAN

where l is the binary representation of labels of sample x and input data for the generator, tD is the label for discriminator which we set to one in this work, and α denotes a parameter for the discriminator.

ControlGAN forces features to be mapped onto corresponding l inputted into the generator. The parameter γt decides how much the generator focus on the input labels for the generator.

It is important to maintain the equilibrium between the two objectives of the generator in ControlGAN since the ControlGAN aims to optimize a decoder-encoder structure and a GAN structure simultaneously. Suppose a well-trained conditional generator G(z,l) which perfectly learned a true distribution exists, then a set of generated samples from the generator has same classification loss with the original dataset:

If a generator is trained to concentrate on the input labels, the value E in (3) would be less than one, and otherwise the value would be more than one.

ControlGAN controls whether to concentrate on learning the distribution of a dataset or learning to generate samples according to input labels by the parameter E that maintains the classification loss of generated samples constantly. The γt is a learning parameter to maintain E which is changed by time step t, i.e. the iteration process, and is calculated as follows:

where r is a learning rate parameter for γt.

3.2 ControlDCGAN structure for the applications

In this work, we used ControlDCGAN structure which is a combination of the architecture of ControlGAN and Deep Convolutional Generative Adversarial Network (DCGAN) (dcgan, )

128×128×3. The architecture we used for the application is summarized in Table 1.

to train the model. The learning rate decreases after 30 epochs, and the model was trained 20 more epochs with the decreased learning rate. The equilibrium parameter

was set to 0.5. As for the inputs for the generator, the 500-dimensional uniform distribution, i.e.

, and the binary encoded labels were employed. We used leaky ReLU activation

(α=0.1) function for the generator, the discriminator and the classifier.

As we described in the previous section, ControlGAN has an advantage for generating label-focused samples by choosing a low value of E. By selecting a low value of E, which means the generated samples have a low value of classification error, we can make the generator more focus on the input labels. Figure 4 shows the comparison between ControlGAN with different E. As shown in Figure 4, with low E, the generated images are significantly label-focused. In E=0.05, the images generated with the condition of ’Pale Skin’, correspond to an unreal level where similar genuine samples rarely or do not exist in the CelebA dataset.

Such a property is the main advantage of ControlGAN since it proves that ControlGAN can generate samples beyond the training set. We will describe further such a zero-shot property of ControlGAN in Section 4.3

In this section, in order to demonstrate generalizability of ControlGAN, ControlGAN was trained with a different dataset, which is a large scale scene dataset called LSUN (lsun, ). The dataset consists of ten different places, such as a bedroom and a restaurant. Among the places, we selected four different labels corresponding to indoor house rooms, i.e. ’Bedroom’, ’Dining room’, ’Kitchen’ and ’Living room’.

The architecture we used for the application is the same as the structure of the previous section. We used the learning rate of 5×10−5, and E is set to 0.05, 0.5 and 1.0. A pre-trained classifier was also used. The classifier was trained for 0.1 epoch. The generator and discriminator were trained for one epoch.

As shown in Figure 5, ControlGAN can learn the features of each room, and successfully generate room images according to the labels. According to our expectation, the equilibrium parameter E decides the degree to concentrate on the input labels as same as the previous application. However, we found that ControlGAN can generate much clearer images with a low E=0.05. Such a property is conjectured because the classifier can assist the GAN training by forcibly mapping the features of labels onto the input l, as we described in Section 2 and Figure 3.

In order to demonstrate that the ControlGAN learns the features and does not just memorize the training set, the input labels are interpolated and extrapolated in this section. Note that the labels were one-hot or binary encoded in the training process, therefore the interpolated values had never been trained.

For a further demonstration of the effectiveness of ControlGAN, we used the extrapolated values between [-1.0, 3.0]. Since the input labels were binary or one-hot encoded, and the training had been conducted with only the two values of 0.0 and 1.0, we expected to obtain a half-smile face image with the value of 0.5 for the ’Smiling’ label and a perfect-smile face image with the value of 3.0 if the ControlGAN learns the features well.

As shown in Figure 6, ControlGAN conducts well with interpolated and extrapolated values of labels. Interestingly, the generated face image with −1×smiling label corresponds to a frown or angry face, which is an untrained feature in the training process. Likewise, −1×paleskin corresponds to the dark skin which is not contained in the labels of CelebA dataset.

Such a result implies the ControlGAN can learn the attributes of input labels. One can easily conjecture that the opposite of a smiling face might be a frown or angry face; ControlGAN can do such a conjecture as well while it have never been trained.

In this paper, we proposed a generative model, called ControlGAN, which can effectively control generated samples. ControlGAN consists of three modules, i.e. a generator/decoder, a discriminator and a classifier/encoder. By mapping corresponding features into input labels, generated samples can be controlled according to the labels.

While ControlGAN is a simple architecture, which is a combination of the vanilla GAN and a decoder-encoder structure, we demonstrated that ControlGAN works well to generate conditional samples. We employed DCGAN architecture to demonstrate the applications; however, the quality of samples can be enhanced with a state-of-art GAN structure, such as StackGAN (r1, ), WGAN (wgan, ) and BEGAN (r3, ).

Furthermore, we demonstrated the ControlGAN conducts with zero-shot values, by feeding interpolated and extrapolated values to the generator. Since the proposed architecture shows powerful performance to control generated samples, we expect that ControlGAN can contribute to the research in generative models.