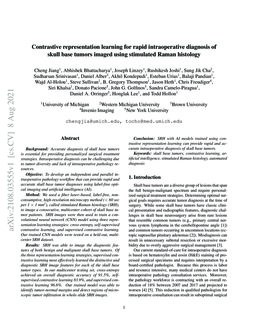 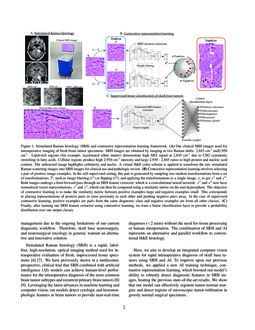 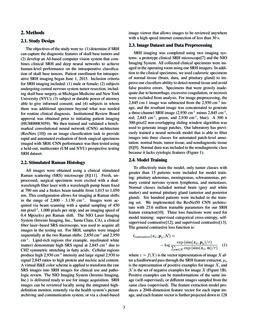 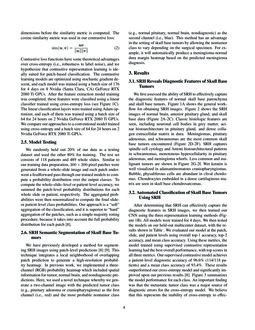 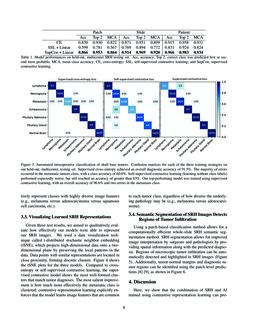 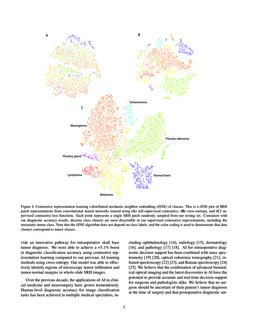 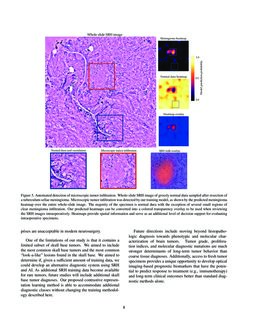 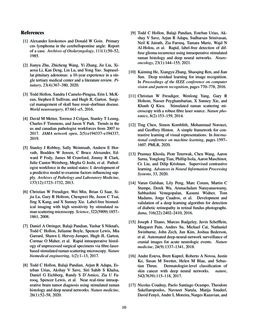 Our current standard-of-care for intraoperative diagnosis is based on hematoxylin and eosin (H&E) staining of processed surgical specimens and requires interpretation by a board-certified pathologist. Because this process is labor and resource intensive, many medical centers do not have intraoperative pathology consultation services. Moreover, the pathology workforce is contracting with an overall reduction of 18% between 2007 and 2017 and projected to worsen [metter2019trends] [robboy2013pathologist]. This reduction in qualified pathologists for intraoperative consultation can result in suboptimal surgical management due to the ongoing limitations of our current diagnostic workflow. Therefore, skull base neurosurgery, and neurosurgical oncology in general, warrant an alternative and innovative solution.

<2 mins) without the need for tissue processing or human interpretation. The combination of SRH and AI represents an alternative and parallel workflow to conventional H&E histology.

Here, we aim to develop an integrated computer vision system for rapid intraoperative diagnosis of skull base tumors using SRH and AI. To improve upon our previous methods, we applied a new AI training technique, contrastive representation learning, which boosted our model’s ability to robustly detect diagnostic features in SRH images, beating the previous state-of-the-art results. We show that our model can effectively segment tumor-normal margins and detect regions of microscopic tumor infiltration in grossly normal surgical specimens.

The objectives of the study were to: (1) determine if SRH can capture the diagnostic features of skull base tumors and (2) develop an AI-based computer vision system that combines clinical SRH and deep neural networks to achieve human-level performance on the intraoperative classification of skull base tumors. Patient enrollment for intraoperative SRH imaging began June 1, 2015. Inclusion criteria for SRH imaging included: (1) male or female; (2) subjects undergoing central nervous system tumor resection, including skull base surgery, at Michigan Medicine and New York University (NYU); (3) subject or durable power of attorney able to give informed consent; and (4) subjects in whom there was additional specimen beyond what was needed for routine clinical diagnosis. Institutional Review Board approval was obtained prior to initiating patient imaging (HUM00083059). We then trained and validated a benchmarked convolutional neural network (CNN) architecture (ResNets [he2016deep]) on an image classification task to provide rapid and automated evaluation of fresh surgical specimens imaged with SRH. CNN performance was then tested using a held-out, multicenter (UM and NYU) prospective testing SRH dataset.

All images were obtained using a clinical stimulated Raman scattering (SRS) microscope [hollon2020near][freudiger2014stimulated]. Fresh, unprocessed, surgical specimens were excited with a dual-wavelength fiber laser with a wavelength pump beam fixed at 790 nm and a Stokes beam tunable from 1,015 to 1,050 nm. This configuration allows for imaging at Raman shifts in the range of 2,800 - 3,130 cm-1. Images were acquired via beam scanning with a spatial sampling of 450 nm pixel-1, 1,000 pixels per strip, and an imaging speed of 0.4 Mpixel(s) per Raman shift. The NIO Laser Imaging System (Invenio Imaging, Inc., Santa Clara, CA), a clinical fiber laser–based SRS microscope, was used to acquire all images in the testing set. For SRH, samples were imaged sequentially at the two Raman shifts: 2,850 cm-1 and 2,950 cm-1. Lipid-rich regions (for example, myelinated white matter) demonstrate high SRS signal at 2,845 cm-1 due to CH2 symmetric stretching in fatty acids. Cellular regions produce high 2,930 cm-1 intensity and large signal 2,930 to signal 2,845 ratios to high protein and nucleic acid content. A virtual H&E color scheme is applied to transform the raw SRS images into SRH images for clinical use and pathologic review. The NIO Imaging System (Invenio Imaging, Inc.) is delivered ready to use for image acquisition. SRH images can be reviewed locally using the integrated high-definition monitor, remotely via the health system’s picture archiving and communication system, or via a cloud-based image viewer that allows images to be reviewed anywhere with a high-speed internet connection of less than 30 s.

and the NIO Imaging System. All collected clinical specimens were imaged in the operating room using our SRH imagers. In addition to the clinical specimens, we used cadaveric specimens of normal tissue (brain, dura, and pituitary gland) to improve our classifiers ability to detect normal tissue and avoid false positive errors. Specimens that were grossly inadequate due to hemorrhage, excessive coagulation, or necrosis were excluded from analysis. For image preprocessing, the 2,845 cm-1 image was subtracted from the 2,930 cm

-1 image, and the resultant image was concatenated to generate a three-channel SRH image (2,930 cm-1 minus 2,845 cm-1, red; 2,845 cm-1, green; and 2,930 cm-1, blue). A 300 × 300-pixel2 non-overlapping sliding window algorithm was used to generate image patches. Our laboratory has previously trained a neural network model that is able to filter images into three classes for automated patch-level annotation: normal brain, tumor tissue, and nondiagnostic tissue [hollon2020near][hollon2021rapid]. Normal dura was included in the nondiagnostic class because it lacks cytologic features (Figure 1).

[chen2020simple], and supervised contrastive[khosla2020supervised]. The general contrastive loss function is:

B). Positive examples can be transformations of the same image (self-supervised), or different images sampled from the same class (supervised). The feature extraction model produces a 2048-dimension feature vector for each input image, and each feature vector is further projected down to 128 dimensions before the similarity metric is computed. The cosine similarity metric was used in our contrastive loss:

Contrastive loss functions have some theoretical advantages over cross-entropy (i.e., robustness to label noise), and we hypothesize that contrastive representation learning is ideally suited for patch-based classification. The contrastive learning models are optimized using stochastic gradient descent, and each model was trained using a batch size of 176 for 4 days on 8 Nvidia (Santa Clara, CA) GeForce RTX 2080 Ti GPUs. After the feature extraction model training was completed, these features were classified using a linear classifier trained using cross-entropy loss (see Figure

We randomly held out 20% of our data as a testing dataset and used the other 80% for training. The test set consists of 118 patients and 489 whole slides. Similar to our training data preparation, 300×300

We have previously developed a method for segmenting SRH images using patch-level predictions [hollon2020near] [hollon2021rapid]. This technique integrates a local neighborhood of overlapping patch prediction to generate a high-resolution probability heatmap. In previous work, we implemented a three-channel (RGB) probability heatmap which included spatial information for tumor, normal brain, and nondiagnostic predictions. Here, we used a novel technique whereby we generate a two-channel image with the predicted tumor class (e.g., pituitary adenoma or craniopharyngioma) as the first channel (i.e., red) and the most probable nontumor class (e.g., normal pituitary, normal brain, nondiagnostic) as the second channel (i.e., blue). This method has an advantage in the setting of skull base tumors by allowing the nontumor class to vary depending on the surgical specimen. For example, it will automatically produce a meningioma-normal dura margin heatmap based on the predicted meningioma diagnosis.

After determining that SRH can effectively capture the diagnostic features in SRH images, we then trained our CNN using the three representation learning methods (Figure 1B). All models were trained for 4 days. We then tested the models on our held-out multicenter dataset, with the results shown in Table . We evaluated our model at the patch, slide, and patient levels using overall top-1 accuracy, top-2 accuracy, and mean class accuracy. Using these metrics, the model trained using supervised contrastive representation learning had the best overall performance, with top scores in all three metrics. Our supervised contrastive model achieves a patient-level diagnostic accuracy of 96.6% (114/118 patients) and a mean class accuracy of 93.4%. These results outperformed our cross-entropy model and significantly improved upon our previous results [hollon2020near]. Figure 3 summarizes the model performance for each class. An important finding was that the metastatic tumor class was a major source of diagnostic errors for the cross-entropy model. We believe that this represents the inability of cross-entropy to effectively represent classes with highly diverse image features (e.g., melanoma versus adenocarcinoma versus squamous cell carcinoma, etc.).

Given these test results, we aimed to qualitatively evaluate how effectively our models were able to represent our SRH images. We used a data visualization technique called t-distributed stochastic neighbor embedding (tSNE), which projects high-dimensional data onto a two-dimensional plane by preserving the local patterns in the data. Data points with similar representations are located in close proximity, forming discrete clusters. Figure

4 shows the tSNE plots for the three models. Compared to cross-entropy or self-supervised contrastive learning, the supervised contrastive model shows the most well-formed clusters that match tumor diagnoses. The most salient improvement is how much more effectively the metastatic class is clustered; contrastive representation learning explicitly enforces that the model learns image features that are common to each tumor class, regardless of how diverse the underlying pathology may be (e.g., melanoma versus adenocarcinoma).

Using a patch-based classification method allows for a computationally efficient whole-slide SRH semantic segmentation method. SRH segmentation allows for improved image interpretation by surgeons and pathologists by providing spatial information along with the predicted diagnosis. Regions of microscopic tumor infiltration can be automatically detected and highlighted in SRH images (Figure 5). Additionally, tumor-normal margins and diagnostic tumor regions can be identified using the patch-level predictions [hollon2020near] [hollon2021rapid], as shown in Figure 6.

Here, we show that the combination of SRH and AI trained using contrastive representation learning can provide an innovative pathway for intraoperative skull base tumor diagnosis. We were able to achieve a +5.1% boost in diagnostic classification accuracy using contrastive representation learning compared to our previous AI training methods using cross-entropy. Our model was able to effectively identify regions of microscopy tumor infiltration and tumor-normal margins in whole-slide SRH images.

Over the previous decade, the applications of AI in clinical medicine and neurosurgery have grown tremendously. Human-level diagnostic accuracy for image classification tasks has been achieved in multiple medical specialties, including ophthalmology [gulshan2016development], radiology [titano2018automated], dermatology [esteva2017dermatologist], and pathology [coudray2018classification] [lu2021ai]. AI for intraoperative diagnostic decision support has been combined with mass spectrometry [calligaris2015maldi] [santagata2014intraoperative], optical coherence tomography [juarez2019ai], infrared spectroscopy [hollon2018shedding] [uckermann2018optical], and Raman spectroscopy [jermyn2015intraoperative] [kast2015identification]. We believe that the combination of advanced biomedical optical imaging and the latest discoveries in AI have the potential to provide accurate and real-time decision support for surgeons and pathologists alike. We believe that no surgeon should be uncertain of their patient’s tumor diagnosis at the time of surgery and that postoperative diagnostic surprises are unacceptable in modern neurosurgery.

One of the limitations of our study is that it contains a limited subset of skull base tumors. We aimed to include the most common skull base tumors and the most common “look-a-like” lesions found in the skull base. We aimed to determine if, given a sufficient amount of training data, we could develop an alternative diagnostic system using SRH and AI. As additional SRH training data become available for rare tumors, future studies will include additional skull base tumor diagnoses. Our proposed contrastive representation learning method is able to accommodate additional diagnostic classes without changing the training methodology described here.