We consider variational time integration using continuous Galerkin Petrov methods applied to evolutionary systems of changing type. We prove optimal-order convergence for the projected error and conclude the paper with some numerical examples and conclusions. 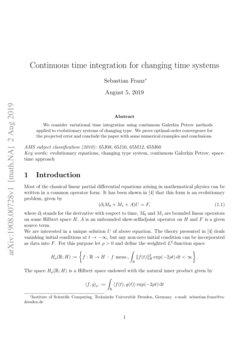 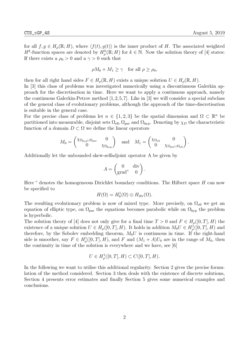 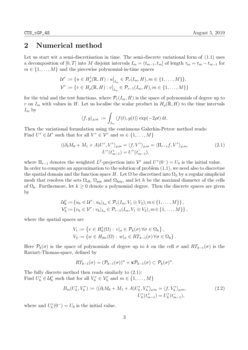 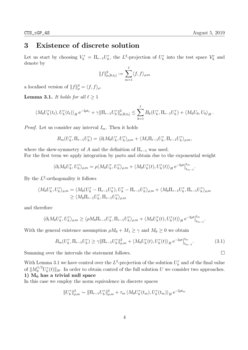 Convergence of a continuous Galerkin method for mixed hyperbolic-parabolic systems

We consider a family of variational time discretizations that are genera...
Simon Becher, et al. ∙

We study the convergence of the discontinuous Galerkin (DG) method appli...
Will Pazner, et al. ∙

Most of the classical linear partial differential equations arising in mathematical physics can be written in a common operator form. It has been shown in

[4] that this form is an evolutionary problem, given by

where ∂t stands for the derivative with respect to time, M0 and M1 are bounded linear operators on some Hilbert space H, A

is an unbounded skew-selfadjoint operator on

H and F is a given source term.

We are interested in a unique solution U of above equation. The theory presented in [4] deals vanishing initial conditions at t→−∞, but any non-zero initial condition can be incorporated as data into F. For this purpose let ρ>0 and define the weighted L2-function space

The space Hρ(R;H) is a Hilbert space endowed with the natural inner product given by

for all f,g∈Hρ(R;H), where ⟨f(t),g(t)⟩ is the inner product of H. The associated weighted Hk-function spaces are denoted by Hkρ(R;H) for k∈N. Now the solution theory of [4] states: If there exists a ρ0>0 and a γ>0 such that

then for all right hand sides F∈Hρ(R,H) exists a unique solution U∈Hρ(R,H).

In [3] this class of problems was investigated numerically using a discontinuous Galerkin approach for the discretisation in time. Here we want to apply a continuous approach, namely the continuous Galerkin-Petrov method [7, 2, 5, 1]. Like in [3] we will consider a special subclass of the general class of evolutionary problems, although the approach of the time-discretisation is suitable in the general case.

For the precise class of problems let n∈{1,2,3} be the spatial dimension and Ω⊂Rn be partitioned into measurable, disjoint sets Ωell,Ωpar and Ωhyp. Denoting by χD

the characteristic function of a domain

D⊂Ω we define the linear operators

Additionally let the unbounded skew-selfadjoint operator A be given by

The resulting evolutionary problem is now of mixed type. More precisely, on Ωell we get an equation of elliptic type, on Ωpar the equations becomes parabolic while on Ωhyp the problem is hyperbolic.

In the following we want to utilise this additional regularity. Section 2 gives the precise formulation of the method considered. Section 3 then deals with the existence of discrete solutions, Section 4

5 gives some numerical examples and conclusions.

Let us start wit a semi-discretisation in time. The semi-discrete variational form of (1.1) uses a decomposition of [0,T] into M disjoint intervals Im=(tm−1,tm] of length τm=tm−tm−1 for m∈{1,…,M} and the piecewise polynomial-in-time spaces

for the trial and the test functions, where Pr(Im,H) is the space of polynomials of degree up to r on Im with values in H. Let us localise the scalar product in Hρ(R,H) to the time intervals Im by

In order to compute an approximation to the solution of problem (1.1), we need also to discretise the spatial domain and the function space H. Let Ω be discretised into Ωh by a regular simplicial mesh that resolves the sets Ωell,Ωpar and Ωhyp, and let h be the maximal diameter of the cells of Ωh. Furthermore, let k≥0 denote a polynomial degree. Then the discrete spaces are given by

where the spatial spaces are

Here Pk(σ) is the space of polynomials of degree up to k on the cell σ and RTk−1(σ) is the Raviart-Thomas-space, defined by

The fully discrete method then reads similarly to (2.1): Find Uτh∈Uτh such that for all Vτh∈Vτh and m∈{1,…,M}

a localised version of ∥f∥2ρ=⟨f,f⟩ρ.

It holds for all ℓ≥1

Let us consider any interval Im. Then it holds

where the skew-symmetry of A and the definition of Πr−1 was used.

By the L2-orthogonality it follows

Summing over the intervals the statement follows. ∎

With Lemma 3.1 we have control over the L2-projection of the solution Uτh and of the final value of ∥M1/20Uτh(t)∥H. In order to obtain control of the full solution U we consider two approaches.

with constants independent of τm and Uτh and we obtain

Applying a Young inequality we have

Therefore, in the case of M0 with only trivial null-space the linear system is solvable and we also have continuous dependence of the solution Uτh on the data.

2) M0 may have a non-trivial null space Here we can apply another norm-equivalence to show the solvability of the discrete systems. Using ρM0+M1≥γ>0 we have the norm equivalence

with constants independent of τm and Uτh. Using a similar approach as before we obtain

With a Young inequality follows

Therefore, also in the general case the linear system is solvable and the solution on each time interval depends continuously on the data and the initial value of the time interval.

Note that we do have the Galerkin orthogonality

be the interpolation operator fulfilling locally for all

We decompose the error into u−U=η+ξ, where

Using the Galerkin orthogonality (4.1) it follows the error equality

Then we have by integration by parts and the properties of Pr for all w∈Vτ and v∈H1ρ([0,T],H)

Thus we get the error equation

from which (4.2) follows by a Cauchy-Schwarz inequality. ∎

which gives upon summation the statement because M0ξ(0)=0. ∎

Thus we have control over the weighted L2-projection of the error and its final value.

for some C>0 implying

In the case of M0 having a non-trivial null-space the norm equivalence considered in the existence proof of Section 3 do only provide a bound exponentially increasing in 1/minτm.

Let τ:=maxm∈{1,…,M}τm be the maximal time-step length. Similarly to [3, Section 4] we can now proceed and estimate the error of the full discretisation. Here the only difference is the time-discretisation method.

We assume for the solution U of (1.1) the regularity

Then we have for the error of the numerical solution Uτh by (2.2)

and if M0 has only a trivial null space

This is a direct consequence of the results in [3, Section 4] combined with the estimates of the previous section. ∎

We consider two examples with unknown solutions. Simulations with known smooth solutions were also made and the theoretical orders were observed. The two following examples show a more realistic behaviour in the case of changing type systems. All computations were done in the finite-element framework SOFE, see github.com/SOFE-Developers/SOFE.

Let us consider as first example one spatial dimension and combine a hyperbolic and an elliptic region. To be more precise, let Ω=[−π,π], Ωhyp=[−π,0], and Ωell=[0,π]. As final time we set T=4π. The problem is now given by

with homogeneous Dirichlet-conditions for the first component of U:R×R→R2, the initial condition U0=0 and a right-hand side F(t,x)=(f(t,x),g(t,x))⋅χ≥0(t), where χ≥0(t) is the characteristic function of the non-negative time line and

shows plots of the components of the solution in the domain. Note that the first component has a kink along x=0 – it is continuous but not differentiable in x. As mesh we use an equidistant mesh of N cells in Ω and M cells in [0,T]. In order to calculate the errors we use a reference solution Uref instead of the unknown solution U. The reference solution is computed on an 4096×2048 mesh with polynomial degrees k=4 and r=3. Table 1

shows the results for different values of M and N and polynomial degrees k and r. We coupled k=r+1 as the theory gives for smooth U the convergence order min{k,r+1} if N and M are proportional. We observe for the continuous Galerkin-Petrov method in the first column only a convergence rate between 1 and 2. Increasing the polynomial degree reduces the error, but does not influence the rate much. A reason for this behaviour could be that U is not smooth enough for the error estimates to hold. For comparison we also computed approximations with the discontinuous Galerkin method from [3]. The errors given in the remaining columns show a similar behaviour with convergence rates between 1 and 2. Nevertheless, the errors are smaller for the discontinuous approach.

shows some snapshots of the first component of the solution U:R×R2→R×R2, approximated by a numerical simulation. Again we use equidistant meshes with N cells in each dimension of space and M cells in [0,T]. As reference solution Uref replacing the unknown exact solution we use an approximation calculated with M=192,N=96,k=3,r=2 and M=128,N=64,k=4,r=3, resp. Table 2

shows the results. Similarly to the previous example we do not achieve the optimal convergence order for both methods. And again the discontinuous Galerkin method has smaller errors.

The continuous solution of an evolutionary system with continuous right hand side can be approximated by several methods. Here we investigated the continuous Galerkin-Petrov method, that has optimal convergence order for smooth solutions. We have proved this for the L2-projection of the error into the test space. For operators M0

having only a trivial null space it also follows for the full error. The benefit of the continuous method compared to the discontinuous Galerkin method is the continuity that implies a non-dissipative behaviour. In our examples with unknown solutions, that are probably not smooth, the discontinuous Galerkin method is slightly better. Furthermore, these examples show that an increase of the polynomial degree in space over 2 and in time over 1 gives no huge benefit. This is different for smooth solutions – here both methods achieve the theoretical high convergence orders.