In this paper, we consider continuous-time semi-decentralized dynamics for the equilibrium computation in a class of aggregative games. Specifically, we propose a scheme where decentralized projected-gradient dynamics are driven by an integral control law. To prove global exponential convergence of the proposed dynamics to an aggregative equilibrium, we adopt a quadratic Lyapunov function argument. We derive a sufficient condition for global convergence that we position within the recent literature on aggregative games, and in particular we show that it improves on established results. 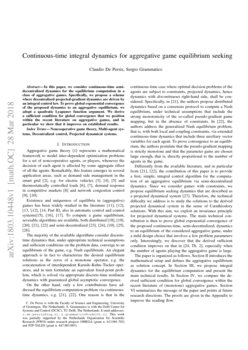 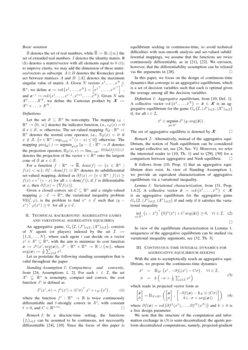 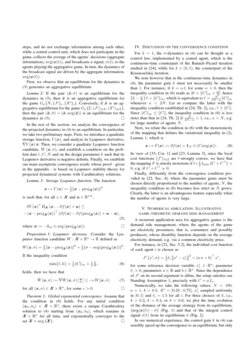 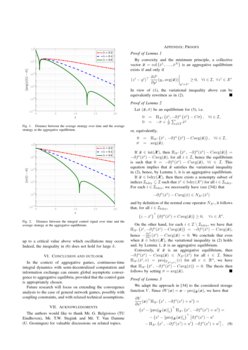 Aggregative game theory [1] represents a mathematical framework to model inter-dependent optimization problems for a set of noncooperative agents, or players, whenever the decision of each agent is affected by some aggregate effect of all the agents. Remarkably, this feature emerges in several application areas, such as demand side management in the smart grid [2], e.g. for electric vehicles [3, 4, 5] and thermostatically controlled loads [6, 7], demand response in competitive markets [8] and network congestion control [9, 10].

The majority of the available algorithms consider discrete-time dynamics that, under appropriate technical assumptions and sufficient conditions on the problem data, converge to an equilibrium of the game, e.g. Nash equilibrium. An elegant approach is in fact to characterize the desired equilibrium solutions as the zeros of a monotone operator, e.g. the concatenation of interdependent Karush–Kuhn–Tucker operators, and in turn formulate an equivalent fixed-point problem, which is solved via appropriate discrete-time nonlinear dynamics with guaranteed global asymptotic convergence.

On the other hand, only a few contributions have addressed the equilibrium computation problem via continuous-time dynamics, e.g. [21, 22]. One reason is that in the continuous-time case where optimal decision problems of the agents are subject to constraints, projected dynamics, hence dynamics with discontinuous right-hand side, shall be considered. Specifically, in [21], the authors propose distributed dynamics based on a consensus protocol to compute a Nash equilibrium, under technical assumptions that include the strong monotonicity of the so-called pseudo-gradient game mapping, but in the absence of constraints. In [22]

, the authors address the generalized Nash equilibrium problem, that is, with both local and coupling constraints, via extended continuous-time dynamics that include three auxiliary vector variables for each agent. To prove convergence to an equilibrium, the authors postulate that the pseudo-gradient mapping is strictly monotone and that the parameter gains are chosen large enough, that is, directly proportional to the number of agents in the game.

Differently from the available literature, and in particular from [21, 22], the contribution of this paper is to provide a first, simple, integral control algorithm for the computation of an aggregative equilibrium via semi-decentralized dynamics. Since we consider games with constraints, we propose equilibrium seeking dynamics that are described as a projected dynamical system [27]. Therefore, the technical difficulty we address is to study the solutions to the derived projected dynamical system in the sense of Carathèodory solutions. With this aim, we exploit an invariance principle for projected dynamical systems. The main technical contribution is then to prove global exponential convergence of the proposed continuous-time, semi-decentralized, dynamics to an equilibrium of the considered aggregative game, under a mild design choice that involves a few problem parameters only. Interestingly, we discover that the derived sufficient condition improves on that in [24, Th. 2], especially when the number of agents playing the aggregative game is large.

The paper is organized as follows. Section 2 introduces the mathematical setup and defines the aggregative equilibrium as solution concept. In Section 3, we propose integral dynamics for the equilibrium computation and present the main technical results. In Section 4, we compare the derived sufficient condition for global convergence within the recent literature of (monotone) aggregative games. Section 6 summarizes the message of the paper and points at future research directions. The proofs are given in the Appendix to improve the reading flow.

0 (1) denotes a matrix/vector with all elements equal to 0 (1); to improve clarity, we may add the dimension of these matrices/vectors as subscript. A⊗B denotes the Kronecker product between matrices A and B. ∥A∥

Let us postulate the following standing assumption that is valid throughout the paper.

Compactness and convexity, from [24, Assumptions 1, 2]. For each i∈I, the set Xi⊊Rn is nonempty, compact and convex; the cost function Ji is defined as

where the function fi:Rn→R is twice continuously differentiable and ℓ-strongly convex in Xi, with constant ℓ>0, and C∈Rn×n. □

In a discrete-time setting, the functions {fi}i∈I can be assumed to be continuous, not necessarily differentiable [24], [10]. Since the focus of this paper is equilibrium seeking in continuous-time, to avoid technical difficulties with non-smooth analysis and set-valued subdifferential mappings, we assume that the functions are twice continuously differentiable, as in [21, 22]. We envision, however, that the differentiability assumption can be relaxed via the arguments in [28]. □

In this paper, we focus on the design of continuous-time dynamics that converge to an aggregative equilibrium, which is a set of decision variables such that each is optimal given the average among all the decision variables.

The set of aggregative equilibria is denoted by ¯X. □

Alternatively, instead of the aggregative equilibrium, the notion of Nash equilibrium can be considered as target collective set, see [24, Sec. V]. Moreover, we refer the interested reader to [10, Th. 1] and to [29, 30] for a comparison between aggregative and Nash equilibria. □

Variational characterization, from [31, Prop. 1.4.2]. A collective vector ¯x=col(¯x1,…,¯xN)∈X is an aggregative equilibrium for the aggregative game Ga(I,(Ji)i∈I,(Xi)i∈I) if and only if it satisfies the variational inequality

In view of the equilibrium characterization in Lemma 1, uniqueness of the aggregative equilibrium can be studied via variational inequality arguments, see [32, Th. 3].

With the aim to asymptotically reach an aggregative equilibrium, we propose the continuous-time dynamics

which reads in projected vector form as

We note that the structure of the computation and information exchange in (3) is semi-decentralized: the agents perform decentralized computations, namely, projected-gradient steps, and do not exchange information among each other, while a central control unit, which does not participate in the game, collects the average of the agents’ decisions (aggregate information), avg(x(t)), and broadcasts a signal, σ(t), to the agents playing the aggregative game. In turn, the dynamics of the broadcast signal are driven by the aggregate information, avg(x(t)).

First, we observe that an equilibrium for the dynamics in (3) generates an aggregative equilibrium.

In the rest of the section, we analyze the convergence of the projected dynamics in (4) to an equilibrium. In particular, we take two preliminary steps. First, we introduce a quadratic storage function, V(x), and analyze its Lyapunov derivative, ∇V(x)˙x. Then, we consider a quadratic Lyapunov function candidate, W(x,σ), and establish a condition on the problem data ℓ, C, N and on the design parameter k such that its Lyapunov derivative is negative definite. Finally, we establish our main asymptotic convergence result, whose proof - given in the appendix - is based on Lyapunov stability theory for projected dynamical systems with Carathèodory solutions.

If the inequality condition

holds, then we have that

Global exponential convergence. Assume that the condition in (6) holds. For any initial condition (x0,σ0)∈X×Rn, there exists a unique Carathèodory solution to (4) starting from (x0,σ0), which remains in X×Rn for all time, and exponentially converges to the set ¯X×avg(¯X). □

4 Discussion on the convergence condition

Next, we relate the condition in (6) with the monotonicity of the mapping that defines the variational inequality in (2), Lemma 1, which is

Finally, differently from the convergence condition provided in [22, Sec. 4], where the parameter gains must be chosen directly proportional to the number of agents, N, the inequality condition in (6) becomes less strict as N grows. Clearly, the latter is an advantageous feature especially when the number of agents is very large.

A recurrent application area for aggregative games is the demand side management, where the agents of the game are electricity prosumers, that is, consumers and possibly producers, whose disutility function depends on the average electricity demand, e.g. via a common electricity price.

For instance, in [22, Sec. 5.2], the individual cost function of each agent i is chosen as

for some reference decision variable xi∗∈Rn, parameter ℓi>0, parameters a∈R and b∈Rn. Since the dependence of Ji on its second argument is affine, the setup satisfies our Standing Assumption 1, precisely with C=aIn.

In our numerical experience, the control gain k in (4) can sensibly speed up the convergence to an equilibrium, but only up to a critical value above which oscillations may occur. Indeed, the inequality in (6) does not hold for large k.

In the context of aggregative games, continuous-time integral dynamics with semi-decentralized computation and information exchange can ensure global asymptotic convergence to aggregative equilibria, provided that the control gain is appropriately chosen.

Future research will focus on extending the convergence analysis to the case of general network games, possibly with coupling constraints, and with relaxed technical assumptions.

By convexity and the minimum principle, a collective vector ¯x=col(¯x1,…,¯xN) is an aggregative equilibrium exists if and only if

In view of (1), the variational inequality above can be equivalently rewritten as in (2). ■

If ¯x∈bdry(X), then there exists a nonempty subset of indices Ibdry⊆I such that ¯xi∈bdry(Xi) for all i∈Ibdry. For each i∈Ibdry, we necessarily have (see [34]) that

and by definition of the normal cone operator NXi, it follows that, for all i∈Ibdry,

We adapt the approach in [34] to the considered storage function V. Since ∂V(x)=x−proj¯X(x), we have that

where [proj¯X(x)]i denotes the ith block-component of the vector proj¯X(x). Now, as a consequence of Moreau’s decomposition theorem, it holds that

and, by definition of NXi and noting that [proj¯X(x)]i∈Xi, we have that

From the latter and (9), it then follows that

where . Again by Moreau’s decomposition theorem, the latter yields

which, by definition of NXi([proj¯X(x)]i), implies that

where the first equality holds by (12), and the second one holds in view of (15). The thesis then follows by summing up the inequalities over i∈I. ■

For ease of notation, let us define ¯σ:=avg(proj¯X(x)). We first note that

Since the functions {fi}i∈I are twice continuous differentiable and the sets Xi’s are convex, we have that

Furthermore, we have that

By rearranging the terms in matrix form, we obtain that

Finally, we apply the Gershgorin theorem to the matrix M. Namely, the condition in (6) implies that

which in turn implies that M≻0. The proof then follows with ϵ:=λmin(M)>0. ■

The dynamics in (4) represent a projected dynamical system with discontinuous right-hand side [35]. Thus, its solutions must be intended in a Carathèodory sense.

), and by a chain rule for absolutely continuous functions, for almost every

Thus, W is non-increasing along (x(t),σ(t)), and we conclude that C is a forward invariant set. Using a Gronwall–Bellman inequality, see the final arguments in the proof of [37, Th. 2], we obtain that