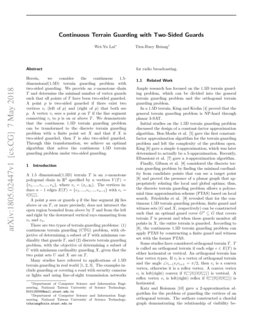 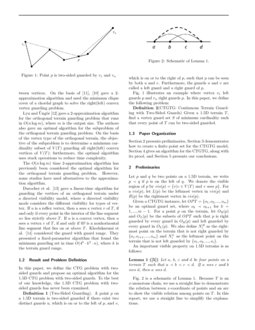 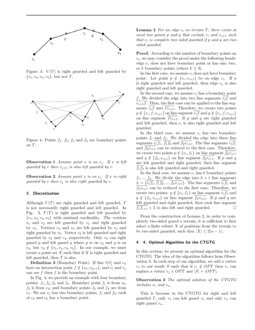 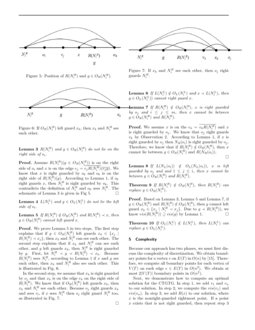 A point p sees or guards q if the line segment ¯¯¯¯¯pq lies above or on T, or more precisely, does not intersect the open region bounded from above by T and from the left and right by the downward vertical rays emanating from v1 and vn.

Many studies have referred to applications of 1.5D terrain guarding in real world [1, 2, 3]. The examples include guarding or covering a road with security cameras or lights and using line-of-sight transmission networks for radio broadcasting.

In a 1.5D terrain, King and Krohn [4] proved that the general terrain guarding problem is NP-hard through planar 3-SAT.

Katz and Roisman [10] gave a 2-approximation algorithm for the problem of guarding the vertices of an orthogonal terrain. The authors constructed a chordal graph demonstrating the relationship of visibility between vertices. On the basis of [11], [10] gave a 2-approximation algorithm and used the minimum clique cover of a chordal graph to solve the right(left) convex vertex guarding problem.

Definition 1 (Two-Sided Guarding). A point p on a 1.5D terrain is two-sided guarded if there exist two distinct guards u, which is on or to the left of p, and v, which is on or to the right of p, such that p can be seen by both u and v. Furthermore, the guards u and v are called a left guard and a right guard of p.

Fig. 1 illustrates an example where vertex v1 left guards p and vn right guards p. In this paper, we define the following problem:

Definition 2(CTGTG: Continuous Terrain Guarding with Two-Sided Guards) Given a 1.5D terrain T, find a vertex guard set S of minimum cardinality such that every point of T can be two-sided guarded.

Section 2 presents preliminaries, Section 3 demonstrates how to create a finite point set for the CTGTG model, Section 4 gives an algorithm for the CTGTG, along with its proof, and Section 5 presents our conclusions.

An important visible property on 1.5D terrains is as follows:

From the construction of Lemma 3, in order to completely two-sided guard a terrain, it is sufficient to first select a finite subset X of positions from the terrain to be two-sided guarded, such that |X|≤2(n−1).

4 4. Optimal Algorithm for the CTGTG

In this section, we present an optimal algorithm for the CTGTG. The idea of the algorithm follows from Observation 4. In each step of our algorithm, we add a vertex vi to our result S such that if vi∉OPT then vi can replace a vertex vj∈OPT and |S|=|OPT|.

The optimal solution of the CTGTG includes v1 and vn.

This is because in the CTGTG for right and left guarded T, only v1 can left guard v1 and only vn can right guard vn.

In the second step, we assume that xk is right guarded by oj and that xk is on the edge ek on the right side of R(NRi). We know that if OR(NRi) left guards xk, then xk and NRi see each other. Because oj right guards xk and sees vl, if x sees NRi then oj right guard NRi too, as illustrated in Fig. 7.

We propose Algorithm 1 to compute L(x) for all points of X in O(n) according to Lemma 5 and Lemma 2. We unite X and V(T) in a set Q. Algorithm 1 finds L(qi)∈Q from left to right. We prove that the running time of Algorithm 1 is O(n).

Algorithm 2 runs in O(n). For each xi, we examine whether xi is guarded by pa∈P from xi to g(xi). If g(xi) = ga = vb, then Algorithm 2 will not visit the point and vertex between xi and vb. We count the number of times xi is not seen by P. We can check pj from xi to L(xi). If pj does not see xi, then we will not check pj for {xk∣xi≺xk}. Assume pj does not see xi, pk sees xi, and pk≺pj≺xi, if {xl∣xi≺xl} is seen by pj, then pk sees {xl∣xi≺xl} according to Lemma 2. The number of times X is not seen by P is |V(T)|, and the number of times X is seen by P is |X|. Therefore, the algorithm visits the point and vertex at most 2|X|+|V(T)| times. After computing all L(xi), Algorithm 2 runs in O(n).

In this paper, we considered the CTGTG problem and devised an algorithm that can determine the minimal cardinality vertex that guards T under two-sided guarding. We showed that the CTGTG problem can be reduced to the discrete terrain guarding problem with at most 2|V(T)| points in O(n2) and solved the problem using our devised algorithm in O(n) where n is the number of vertices on T.