Sufficient conditions for the existence of efficient algorithms are established by introducing the concept of contractility for continuous optimization. Then all the possible continuous problems are divided into three categories: contractile in logarithmic time, contractile in polynomial time, or noncontractile. For the first two, we propose an efficient contracting algorithm to find the set of all global minimizers with a theoretical guarantee of linear convergence; for the last one, we discuss possible troubles caused by using the proposed algorithm. 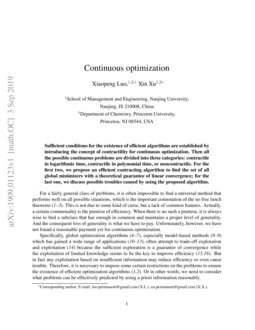 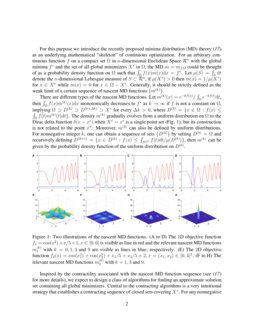 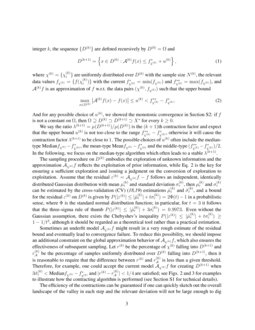 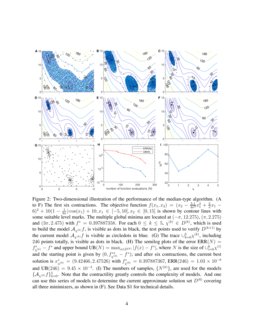 By introducing the concept of contractility, all the possible continuous...
Xiaopeng Luo, et al. ∙

We describe a class of algorithms that establishes a contracting sequenc...
Xiaopeng Luo, et al. ∙

An independent transversal (IT) in a graph with a given vertex partition...
Alessandra Graf, et al. ∙

We introduce a general and comprehensive model for the design and optimi...
András Faragó, et al. ∙

Dividing Bads is Harder than Dividing Goods: On the Complexity of Fair and Efficient Division of Chores

We study the chore division problem where a set of agents needs to divid...
Bhaskar Ray Chaudhury, et al. ∙

Noisy Optimization: Convergence with a Fixed Number of Resamplings

It is known that evolution strategies in continuous domains might not co...
Marie-Liesse Cauwet, et al. ∙

Author contributions: X.L. performed the theoretical analysis and designed the algorithm, X.X. implemented the program, ran experiments, and produced all the plots; X.L. wrote the manuscript. All authors discussed and commented on the experiments and the manuscript. Competing interests: The authors declare no competing financial interests.

For the median-type contracting algorithm, the contracting sequence of length K+1, {D(k)}Kk=0, is established as follows: define D(0)=Ω and

. It has merit in the flexible expressivity because its hyperparameters are automatically tuned with the likelihood maximization. See Data S1 for technical details and (

Now consider the sampling strategy. Suppose χ={χi}Ni=1∈D(k) are N given points and T is a union of N sample sets {Ti}Ni=1, where Ti contains M samples from a normal distribution with mean χi

σ2i (sufficiently large to cover D(k)). Further, let T(k)=T∩D(k). Now we are going to add a new point t from T(k) to χ and t should preferably fill in the gaps in the distribution of χ. Actually, this subsequent point t could be determined as

One can generate uniform samples in D(k) by using the above step recursively, see Fig. S1 for an example to illustrate how the method is performed. This recursive algorithm is closely related to the Voronoi diagrams (2), because the added point will be always in the largest Voronoi cell of χ if the size of T(k) is large enough.

In this section we explain the monotonic convergence: if f is not a constant on Ω and the sequence {D(k)} is generated by Eqs. 1 and 2 (not limited to the median-type aigorithm), then Ω⊇D(k)⊃D(k+1)⊃X∗ for every k≥0.

The monotonic convergence proceeds by induction on k. First, Ω=D(0)⊃X∗ is trivial since f is not a constant on Ω. Assume that D(k)⊃X∗, then D(k)⊃S(k)⊃X∗, where

Without loss of generality, assume that f∗=0 on Ω hereafter. We show that if f is a (p,ρ)-type hierarchical low frequency dominant function, then there exist a class of approximations such that the corresponding error bounds are reduced by a factor of p/(1+p) every time the number of function evaluations doubles.

For any nonnegative integer j and ρ>0, we define the jth ρ-bandlimited function by

where x⋅ω=∑ni=1xiωi is the inner product of x and ω; then according to the Nyquist-Shannon sampling theorem, f(j)ρ can be reconstructed by its samples corresponding to a sampling density of 2jρn/πn. Further, let R(j)ρ=∑∞i=jI(i)ρ, where I(0)ρ=∫∥ω∥∞≤ρ|^f(ω)|dω and

So it follows that

so the error bounds {R(j)ρ}j are reduced by a factor of p/(1+p) every time the number of function evaluations doubles, that is, the corresponding sampling density is increased from 2j−1ρn/πn to 2jρn/πn. Furthermore, by noting that

the error bound can also be rewritten as

So the error bounds are reduced by a factor of p/(1+p) every time the sampling density doubles. In the next section we will further consider the number of samples on the compact sets.

For functions in category I, the key to gaining logarithmic time efficiency comes from two reasons: (i) the median of f on D(k) is reduced by a factor of p/(1+p) as k increases and (ii) there is an upper bound on the number of function evaluations on every D(k) such that a certain approximation A(k)f can be constructed by these samples and the error bound maxx∈D(k)|A(k)f(x)−f(x)| is less than or equal to the median of f on D(k).

Then it is clear that

moreover, since f is a p-type tempered function on Ω,

Further, note that f is a (p,ρ)-type hierarchical low frequency dominant function, it follows that for every k≥0,

then according to the convergence shown in section 3, X∗ is contained in every D(k); in addition, μ(D(k))=2−kμ(Ω) since f is a critical regular function on Ω, and the Fourier approximation f(k+s)ρ can be reconstructed by its samples corresponding to a sampling density of 2k+sρn/πn.

The restriction of f(k+s)ρ to D(k), denoted by f(k+s)ρ|D(k), is closely related to the threshold value NΩ,f=2sμ(Ω)ρn/πn and the prolate spheroidal functions ψj(x)=ψj(x;2k+snρ,D(k))

which are the eigenfunctions of the time and frequency limiting operator

then SN(k)f(x)=SN(k)f(k+s)ρ(x) follows by noting that ψj has a Fourier transform supported in {ω∈Rn:∥ω∥∞≤2jnρ}. Moreover, it is important to mention that a super-exponential decay rate of the error bound maxx∈D(k)|f(k+s)ρ(x)−SN(k)f(k+s)ρ(x)| as soon as N(k) reaches or goes beyond the plunge region around the threshold value NΩ,f (8-9).

Therefore, for every k there exist C>1 and A(k)f such that A(k)f could be constructed by N(k)=CNΩ,f samples of f over D(k) and

further, for a fixed accuracy ϵ>0, there exists a K>0 such that

hence, after K+1 median-type contractions, one gets the approximate solution set D(K+1) with

and the total number of function evaluations is less than

where ⌈t⌉ is the smallest integer greater than or equal to t; let the computational complexity of A(k)f is O((N(k))a), then the time complexity is less than

taking a logarithmic time for any desired accuracy ϵ.

In the above discussion, Eq.4 helps us control the bound of the number of function evaluations as a constant value in each contraction; in fact, even without Eq.4, the bound can also be controlled in a probability sense. So in the following we first establish a weaker version of Eq.4, that is, if Ω is a compact set and f is continuous and not a constant on Ω, then for any ϵ>0, there must exist a qϵ>0 such that

and it follows from Chebyshev s inequality that

So it holds that

with probability at least 1−ϵ, that is,

Let us now see what happens after replacing condition Eq. 4 with Eq. S23. Assume that

If f is predictable in polynomial time, then there exist ρ>0 and p>0 such that Eq. 3 holds; similarly, for every k≥0, it holds that

with probability at least 1−ϵ. Further, according to the convergence shown in section 3, X∗ is contained in every D(k) with probability at least 1−ϵ; in addition, μ(D(k))<μ(D(k−1)) and the Fourier approximation f(kl+s)ρ can be reconstructed by its samples corresponding to a sampling density of 2kl+sρn/πn. And according to the discussion in the previous subsection, for every k there exist C>1 and A(k)f such that A(k)f could be constructed by less than N(k)=C2klNΩ,f samples of f over D(k) and

further, for a fixed accuracy ϵ>0, there exists a K>0 such that

hence, after K+1 contractions, one can obtain the approximate solution set D(K+1) with

and clearly, the total number of function evaluations is much less than

similarly, let the computational complexity of A(k)f is O((N(k))a), then the time complexity is much less than

taking a polynomial time for any desired accuracy ϵ. And it is worth noting that the algorithm is not limited to the median-type.

Suppose that χ are uniformly distributed over Ω with the sample size N, the relevant data values fχ={f(χi)} and Afinterpolates f on χ. For a sample set χ over Ω, we denote the associated fill distance with

then for ϵ>0, there exists Cϵ>0 such that

If f satisfies a α-Hölder condition, i.e., there exist C>0 and 0<α≤1 such that |f(x′)−f(x′′)|<C∥x′−x′′∥α, then there exists a nearest-neighbor interpolant Af which is closely related to the Voronoi diagram of χ, such that for any x∈Ω, it holds that

then similarly, for ϵ>0, the time complexity is

Further, if f does not satisfy any Hölder condition, then the time complexity is larger than O(2naαlog12ϵ) for all α>0, so the algorithm shall not be done in polynomial time.