We reformulate the problem of encoding a multi-scale representation of a sequence in a language model by casting it in a continuous learning framework. We propose a hierarchical multi-scale language model in which short time-scale dependencies are encoded in the hidden state of a lower-level recurrent neural network while longer time-scale dependencies are encoded in the dynamic of the lower-level network by having a meta-learner update the weights of the lower-level neural network in an online meta-learning fashion. We use elastic weights consolidation as a higher-level to prevent catastrophic forgetting in our continuous learning framework. 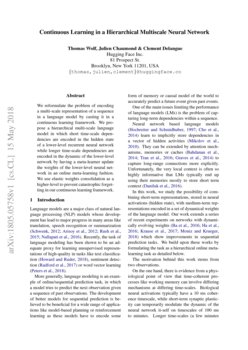 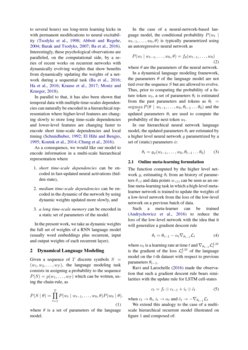 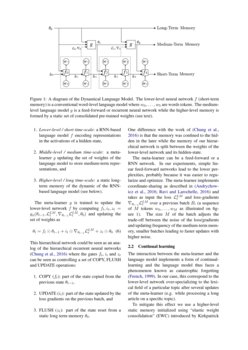 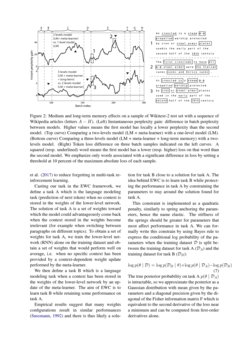 Language models are a major class of natural language processing (NLP) models whose development has lead to major progress in many areas like translation, speech recognition or summarization

More generally, language modeling is an example of online/sequential prediction task, in which a model tries to predict the next observation given a sequence of past observations. The development of better models for sequential prediction is believed to be beneficial for a wide range of applications like model-based planning or reinforcement learning as these models have to encode some form of memory or causal model of the world to accurately predict a future event given past events.

One of the main issues limiting the performance of language models (LMs) is the problem of capturing long-term dependencies within a sequence.

In this work, we study the possibility of combining short-term representations, stored in neural activations (hidden state), with medium-term representations encoded in a set of dynamical weights of the language model. Our work extends a series of recent experiments on networks with dynamically evolving weights (Ba et al., 2016; Ha et al., 2016; Krause et al., 2017; Moniz and Krueger, 2018) which show improvements in sequential prediction tasks. We build upon these works by formulating the task as a hierarchical online meta-learning task as detailed below.

The motivation behind this work stems from two observations.

On the one hand, there is evidence from a physiological point of view that time-coherent processes like working memory can involve differing mechanisms at differing time-scales. Biological neural activations typically have a 10 ms coherence timescale, while short-term synaptic plasticity can temporarily modulate the dynamic of the neural network it-self on timescales of 100 ms to minutes. Longer time-scales (a few minutes to several hours) see long-term learning kicks in with permanent modifications to neural excitability (Tsodyks et al., 1998; Abbott and Regehr, 2004; Barak and Tsodyks, 2007; Ba et al., 2016). Interestingly, these psychological observations are paralleled, on the computational side, by a series of recent works on recurrent networks with dynamically evolving weights that show benefits from dynamically updating the weights of a network during a sequential task (Ba et al., 2016; Ha et al., 2016; Krause et al., 2017; Moniz and Krueger, 2018).

As a consequence, we would like our model to encode information in a multi-scale hierarchical representation where

In the present work, we take as dynamic weights the full set of weights of a RNN language model (usually word embeddings plus recurrent, input and output weights of each recurrent layer).

, the language modeling task consists in assigning a probability to the sequence

which can be written, using the chain-rule, as

where θ is a set of parameters of the language model.

In the case of a neural-network-based language model, the conditional probability P(wt∣wt−1,…,w0,θ) is typically parametrized using an autoregressive neural network as

where θ are the parameters of the neural network.

In a dynamical language modeling framework, the parameters θ of the language model are not tied over the sequence S but are allowed to evolve. Thus, prior to computing the probability of a future token wt, a set of parameters θt

is estimated from the past parameters and tokens as

θt=argmaxθP(θ∣wt−1,…,w0,θt−1…θ0) and the updated parameters θt are used to compute the probability of the next token wt.

The function computed by the higher level network g, estimating θt from an history of parameters θ<t and data points w<t, can be seen as an online meta-learning task in which a high-level meta-learner network is trained to update the weights of a low-level network from the loss of the low-level network on a previous batch of data.

Such a meta-learner can be trained (Andrychowicz et al., 2016) to reduce the loss of the low-level network with the idea that it will generalize a gradient descent rule

where αt is a learning rate at time t and ∇θt−1LLMt is the gradient of the loss LLMt of the language model on the t-th dataset with respect to previous parameters θt−1.

We extend this analogy to the case of a multi-scale hierarchical recurrent model illustrated on figure 1 and composed of:

The meta-learner g is trained to update the lower-level network f by computing ft,it,zt=gϕ(θt−1,LLMt,∇θt−1LLMt,θ0) and updating the set of weights as

This hierarchical network could be seen as an analog of the hierarchical recurrent neural networks (Chung et al., 2016) where the gates ft, it and zt can be seen as controlling a set of COPY, FLUSH and UPDATE operations:

One difference with the work of Chung et al. (2016) is that the memory was confined to the hidden in the later while the memory of our hierarchical network is split between the weights of the lower-level network and its hidden-state.

The meta-learner can be a feed-forward or a RNN network. In our experiments, simple linear feed-forward networks lead to the lower perplexities, probably because it was easier to regularize and optimize. The meta-learner implements coordinate-sharing as described in Andrychowicz et al. (2016); Ravi and Larochelle (2016) and takes as input the loss LLMt and loss-gradients ∇θt−1LLMt over a previous batch Bi (a sequence of M tokens w0,…,wM as illustrated on figure 1). The size M of the batch adjusts the trade-off between the noise of the loss/gradients and updating frequency of the medium-term memory, smaller batches leading to faster updates with higher noise.

The interaction between the meta-learner and the language model implements a form of continual-learning and the language model thus faces a phenomenon known as catastrophic forgetting (French, 1999). In our case, this correspond to the lower-level network over-specializing to the lexical field of a particular topic after several updates of the meta-learner (e.g. while processing a long article on a specific topic).

Casting our task in the EWC framework, we define a task A which is the language modeling task (prediction of next token) when no context is stored in the weights of the lower-level network. The solution of task A is a set of weights toward which the model could advantageously come back when the context stored in the weights become irrelevant (for example when switching between paragraphs on different topics). To obtain a set of weights for task A, we train the lower-level network (RNN) alone on the training dataset and obtain a set of weights that would perform well on average, i.e. when no specific context has been provided by a context-dependent weight update performed by the meta-learner.

We then define a task B which is a language modeling task when a context has been stored in the weights of the lower-level network by an update of the meta-learner. The aim of EWC is to learn task B while retaining some performance on task A.

The true posterior probability on task A

is intractable, so we approximate the posterior as a Gaussian distribution with mean given by the parameters and a diagonal precision given by the diagonal of the Fisher information matrix F which is equivalent to the second derivative of the loss near a minimum and can be computed from first-order derivatives alone.

Several works have been devoted to dynamically updating the weights of neural networks during inference. A few recent architectures are the Fast-Weights of Ba et al. (2016), the Hypernetworks of Ha et al. (2016) and the Nested LSTM of Moniz and Krueger (2018). The weights update rules of theses models use as inputs one or several of (i) a previous hidden state of a RNN network or higher level network and/or (ii) the current or previous inputs to the network. However, these models do not use the predictions of the network on the previous tokens (i.e. the loss and gradient of the loss of the model) as in the present work. The architecture that is most related to the present work is the study on dynamical evaluation of Krause et al. (2017)

in which a loss function similar to the loss function of the present work is obtained empirically and optimized using a large hyper-parameter search on the parameters of the SGD-like rule.

As mentioned in 2.2, a set of pre-trained weights of the RNN language model is first obtained by training the lower-level network f and computing the diagonal of the Fisher matrix around the final weights.

Then, the meta-learner g is trained in an online meta-learning fashion on the validation dataset (alternatively, a sub-set of the training dataset could be used). A training sequence S is split in a sequence of mini-batches Bi, each batch Bi containing M inputs tokens (wi×M,…,wi×M+M) and M associated targets (wi×M+1,…,wi×M+M+1). In our experiments we varied M between 5 and 20.

The meta-learner is trained as described in (Andrychowicz et al., 2016; Li and Malik, 2016) by minimizing the sum over the sequence of LM losses: Lmeta=∑i>0LLMi. The meta-learner is trained by truncated back-propagation through time and is unrolled over at least 40 steps as the reward from the medium-term memory is relatively sparse Li and Malik (2016).

To be able to unroll the model over a sufficient number of steps while using a state-of-the-art language model with over than 30 millions parameters, we use a memory-efficient version of back propagation through time based on gradient checkpointing as described by Grusly et al. (2016).

We performed a series of experiments on the Wikitext-2 dataset Merity et al. (2016) using an AWD-LSTM language model (Merity et al., 2017) and a feed-forward and RNN meta-learner.

The test perplexity are similar to perplexities obtained using dynamical evaluation (Krause et al., 2017), reaching 46.9 with a linear feed-forward meta-learner when starting from a one-level language model with test perplexity of 64.8.

Some quantitative experiments are shown on Figure 2 using a linear feed-forward network to illustrate the effect of the various layers in the hierarchical model. The curves shows differences in batch perplexity between model variants.

The top curve compares a one-level model (language model) with a two-levels model (language model + meta-learner). The meta-learner is able to learn medium-term representations to progressively reduce perplexity along articles (see e.g. articles C and E). Right sample 1 (resp. 2) details sentences at the begging (resp. middle) of article E related to a warship called “Ironclad”. The addition of the meta-learner reduces the loss on a number of expression related to the warship like “ironclad” or “steel armor”.

Bottom curve compares a three-levels model (language model + meta-learner + long-term memory) with the two-levels model. The local loss is reduced at topics changes and beginning of new topics (see e.g. articles B, D and F). The right sample 3 can be contrasted with sample 1 to illustrate how the hierarchical model is able to better recover a good parameter space following a change in topic.