Despite remarkable successes achieved by modern neural networks in a wide range of applications, these networks perform best in domain-specific stationary environments where they are trained only once on large-scale controlled data repositories. When exposed to non-stationary learning environments, current neural networks tend to forget what they had previously learned, a phenomena known as catastrophic forgetting. Most previous approaches to this problem rely on memory replay buffers which store samples from previously learned tasks, and use them to regularize the learning on new ones. This approach suffers from the important disadvantage of not scaling well to real-life problems in which the memory requirements become enormous. We propose a memoryless method that combines standard supervised neural networks with self-organizing maps to solve the continual learning problem. The role of the self-organizing map is to adaptively cluster the inputs into appropriate task contexts - without explicit labels - and allocate network resources accordingly. Thus, it selectively routes the inputs in accord with previous experience, ensuring that past learning is maintained and does not interfere with current learning. Out method is intuitive, memoryless, and performs on par with current state-of-the-art approaches on standard benchmarks. 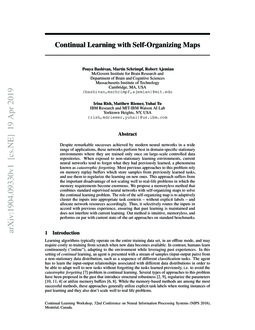 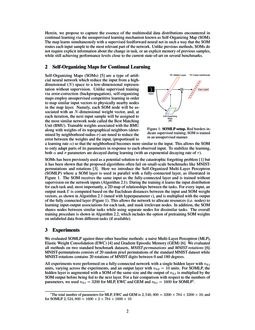 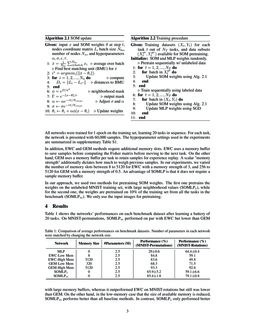 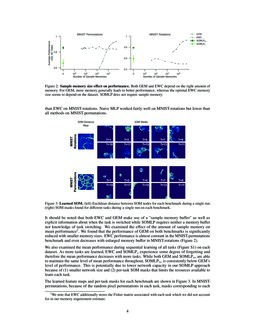 Learning algorithms typically operate on the entire training data set, in an offline mode, and may require costly re-training from scratch when new data becomes available. In contrast, humans learn continuously ("online"), adapting to the environment while leveraging past experiences. In this setting of continual learning, an agent is presented with a stream of samples (input-output pairs) from a non-stationary data distribution, such as a sequence of different classification tasks. The agent has to learn the input-output relationships associated with different data distributions in order to be able to adapt well to new tasks without forgetting the tasks learned previously, i.e. to avoid the catastrophic forgetting catastrophic problem in continual learning. Several types of approaches to this problem have been proposed in the past that introduce structural robustness goodfellow2013 ; srivastava2013 , regularize the parameters yosinski ; Zenke2017 ; ewc or utilize memory buffers gem ; mbpa . While the memory-based methods are among the most successful methods, these approaches generally utilize explicit task labels when storing instances of past learning and they also don’t scale well to real life problems.

Herein, we propose to capture the essence of the multimodal data distributions encountered in continual learning via the unsupervised learning mechanism known as Self-Organizing Map (SOM). The map learns simultaneously with a supervised feedforward neural net in such a way that the SOM routes each input sample to the most relevant part of the network. Unlike previous methods, SOMs do not require explicit information about the change in task, or an explicit memory of previous samples, while still achieving performance levels close to the current state-of-art on several benchmarks.

) space to a low-dimensional representation without supervision. Unlike supervised training via error-correction (backpropagation), self-organizing maps employ unsupervised competitive learning in order to map similar input vectors to physically nearby nodes in the map layer. Namely, each SOM node will be associated with an

N-dimensional weight vector, and, at each iteration, the next input sample will be assigned to the most similar network node called the Best Matching Unit (BMU). Trainable weights associated with the BMU along with weights of its topographical neighbors (determined by neighborhood radius σ) are tuned to reduce the error between the weights and the input, (proportioanl to a learning rate α) so that the neighborhood becomes more similar to the input. This allows the SOM to only adapt parts of its parameters in response to each observed input. To stabilize the learning, both α and σ parameters are decayed during learning (with an exponential decaying rate of τ).

. Here we introduce the Self-Organized Multi-Layer Perceptron (SOMLP) where a SOM layer is used in parallel with a fully-connected layer, as illustrated in

Figure 1. The SOM receives the same input as the fully-connected layer and is trained without supervision on the network inputs (Algorithm 1). During the training it learns the input distribution for each task and, most importantly, a 2D map of relationships between the tasks. For every input, an output mask Γ is computed based on the Euclidean distances between the input and SOM weight vectors, as shown in Algorithm 1

ϵ), and is multiplied with the output of the fully connected layer (Figure 1). This allows the network to allocate resources (i.e. nodes) to learning input-output associations for each task, and mask irrelevant nodes. In addition, the SOM shares nodes between similar tasks while using separate nodes for dissimilar tasks. The overall training procedure is shown in Algorithm 2, which includes the option of pretraining SOM weights on unlabeled data from different tasks (if available).

All networks were trained for 1 epoch on the training set, learning 20 tasks in sequence. For each task, the network is presented with 60,000 samples. The hyperparameter settings used in the experiments are summarized in supplementary

In our approach, we used two methods for pretraining SOM weights. The first one pretrains the weights on the unlabeled MNIST training set, with large neighborhood values (SOMLPs), while for the second one, the weights are pretrained on 10% of the training set from all the tasks in the benchmark (SOMLPm). We only use the input images for pretraining.

Table 1 shows the networks’ performances on each benchmark dataset after learning a battery of 20 tasks.

It should be noted that both EWC and GEM make use of a "sample memory buffer" as well as explicit information about when the task is switched while SOMLP requires neither a memory buffer nor knowledge of task switching. We examined the effect of the amount of sample memory on mean performance222

We note that EWC additionally stores the Fisher matrix associated with each task which we did not account for in our memory requirement estimate.

. We found that the performance of GEM on both benchmarks is significantly reduced with smaller memory sizes. EWC performance is almost constant in the MNIST-permutations benchmark and even decreases with enlarged memory buffer in MNIST-rotations (Figure 2).

We also examined the mean performance during sequential learning of all tasks (Figure S1) on each dataset. As more tasks are learned, EWC and SOMLPs experience some degree of forgetting and therefore the mean performance decreases with more tasks. While both GEM and SOMLPm are able to maintain the same level of mean performance throughout, SOMLPm is consistently below GEM’s level of performance. This is potentially due to lower network capacity in our SOMLP approach because of (1) smaller network size and (2) per-task SOM masks that limits the resources available to learn each task.

The learned feature maps and per-task masks for each benchmark are shown in Figure 3. In MNIST-permutations, because of the random pixel permutations in each task, masks corresponding to each task are independent of each other. Conversely, in MNIST-rotations, the learned masks share nodes between tasks that are more similar (i.e. slightly rotated tasks) and use independent nodes for more dissimilar tasks (e.g. tasks that are separated by larger rotation angles).

Acknowledgements: This research was supported by the MIT-IBM Watson AI Lab and the Semiconductor Research Corporation (SRC).