Distributed representations of sentences have become ubiquitous in natural language processing tasks. In this paper, we consider a continual learning scenario for sentence representations: Given a sequence of corpora, we aim to optimize the sentence encoder with respect to the new corpus while maintaining its accuracy on the old corpora. To address this problem, we propose to initialize sentence encoders with the help of corpus-independent features, and then sequentially update sentence encoders using Boolean operations of conceptor matrices to learn corpus-dependent features. We evaluate our approach on semantic textual similarity tasks and show that our proposed sentence encoder can continually learn features from new corpora while retaining its competence on previously encountered corpora. 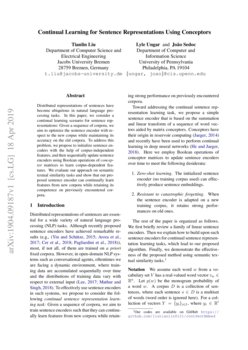 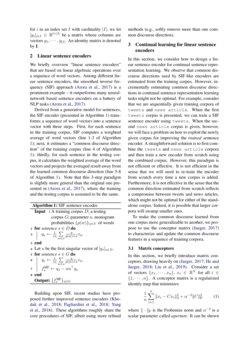 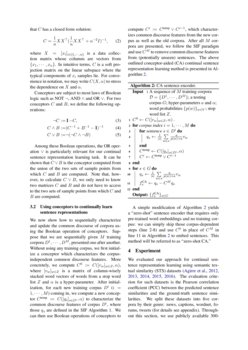 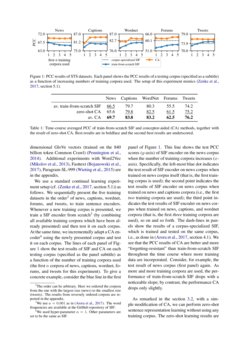 Fake Sentence Detection as a Training Task for Sentence Encoding

Distributed representations of sentences are essential for a wide variety of natural language processing (NLP) tasks. Although recently proposed sentence encoders have achieved remarkable results (e.g., (Yin and Schütze, 2015; Arora et al., 2017; Cer et al., 2018; Pagliardini et al., 2018)), most, if not all, of them are trained on a priori

fixed corpora. However, in open-domain NLP systems such as conversational agents, oftentimes we are facing a dynamic environment, where training data are accumulated sequentially over time and the distributions of training data vary with respect to external input

(Lee, 2017; Mathur and Singh, 2018). To effectively use sentence encoders in such systems, we propose to consider the following continual sentence representation learning task: Given a sequence of corpora, we aim to train sentence encoders such that they can continually learn features from new corpora while retaining strong performance on previously encountered corpora.

Toward addressing the continual sentence representation learning task, we propose a simple sentence encoder that is based on the summation and linear transform of a sequence of word vectors aided by matrix conceptors. Conceptors have their origin in reservoir computing

He and Jaeger (2018). Here we employ Boolean operations of conceptor matrices to update sentence encoders over time to meet the following desiderata:

The rest of the paper is organized as follows. We first briefly review a family of linear sentence encoders. Then we explain how to build upon such sentence encoders for continual sentence representation learning tasks, which lead to our proposed algorithm. Finally, we demonstrate the effectiveness of the proposed method using semantic textual similarity tasks.111Our codes are available on GitHub https://github.com/liutianlin0121/contSentEmbed

We assume each word w from a vocabulary set V has a real-valued word vector vw∈Rn. Let p(w)

be the monogram probability of a word

w. A corpus D is a collection of sentences, where each sentence s∈D is a multiset of words (word order is ignored here). For a collection of vectors Y={yi}i∈I, where yi∈Rl for i in an index set I with cardinality |I|, we let [yi]i∈I∈Rl×|I| be a matrix whose columns are vectors y1,⋯,y|I|

. An identity matrix is denoted by

Derived from a generative model for sentences, the SIF encoder (presented in Algorithm 1) transforms a sequence of word vectors into a sentence vector with three steps. First, for each sentence in the training corpus, SIF computes a weighted average of word vectors (line 1-3 of Algorithm 1

); next, it estimates a “common discourse direction” of the training corpus (line 4 of Algorithm

1); thirdly, for each sentence in the testing corpus, it calculates the weighted average of the word vectors and projects the averaged result away from the learned common discourse direction (line 5-8 of Algorithm 1). Note that this 3-step paradigm is slightly more general than the original one presented in (Arora et al., 2017), where the training and the testing corpus is assumed to be the same.

In this section, we consider how to design a linear sentence encoder for continual sentence representation learning. We observe that common discourse directions used by SIF-like encoders are estimated from the training corpus. However, incrementally estimating common discourse directions in continual sentence representation learning tasks might not be optimal. For example, consider that we are sequentially given training corpora of tweets and news article. When the first tweets corpus is presented, we can train a SIF sentence encoder using tweets. When the second news article corpus is given, however, we will face a problem on how to exploit the newly given corpus for improving the trained sentence encoder. A straightforward solution is to first combine the tweets and news article corpora and then train a new encoder from scratch using the combined corpus. However, this paradigm is not efficient or effective. It is not efficient in the sense that we will need to re-train the encoder from scratch every time a new corpus is added. Furthermore, it is not effective in the sense that the common direction estimated from scratch reflects a compromise between tweets and news articles, which might not be optimal for either of the stand-alone corpus. Indeed, it is possible that larger corpora will swamp smaller ones.

where ∥⋅∥F is the Frobenius norm and α−2 is a scalar parameter called aperture. It can be shown that C has a closed form solution:

where X=[xi]i∈{1,⋯,n} is a data collection matrix whose columns are vectors from {x1,⋯,xn}. In intuitive terms, C is a soft projection matrix on the linear subspace where the typical components of xi samples lie. For convenience in notation, we may write C(X,α) to stress the dependence on X and α.

Conceptors are subject to most laws of Boolean logic such as NOT ¬, AND ∧ and OR ∨. For two conceptors C and B, we define the following operations:

A simple modification of Algorithm 2 yields a “zero-shot” sentence encoder that requires only pre-trained word embeddings and no training corpus: we can simply skip those corpus-dependent steps (line 2-8) and use C0 in place of CM in line 11 in Algorithm 2 to embed sentences. This method will be referred to as “zero-shot CA.”

We use a standard continual learning experiment setup (cf. (Zenke et al., 2017, section 5.1)) as follows. We sequentially present the five training datasets in the order222The order can be arbitrary. Here we ordered the corpora from the one with the largest size (news) to the smallest size (tweets). The results from reversely ordered corpora are reported in the appendix. of news, captions, wordnet, forums, and tweets, to train sentence encoders. Whenever a new training corpus is presented, we train a SIF encoder from scratch333We use a=0.001 as in (Arora et al., 2017). The word frequencies are available at the GitHub repository of SIF. (by combining all available training corpora which have been already presented) and then test it on each corpus. At the same time, we incrementally adapt a CA encoder444We used hyper-parameter α=1. Other parameters are set to be the same as SIF. using the newly presented corpus and test it on each corpus. The lines of each panel of Figure 1 show the test results of SIF and CA on each testing corpus (specified as the panel subtitle) as a function of the number of training corpora used (the first n corpora of news, captions, wordnet, forums, and tweets for this experiment). To give a concrete example, consider the blue line in the first panel of Figure 1. This line shows the test PCC scores (y-axis) of SIF encoder on the news corpus when the number of training corpora increases (x-axis). Specifically, the left-most blue dot indicates the test result of SIF encoder on news corpus when trained on news corpus itself (that is, the first training corpus is used); the second point indicates the test results of SIF encoder on news corpus when trained on news and captions corpora (i.e., the first two training corpora are used); the third point indicates the test results of SIF encoder on news corpus when trained on news, captions, and wordnet corpora (that is, the first three training corpora are used), so on and so forth. The dash-lines in panels show the results of a corpus-specialized SIF, which is trained and tested on the same corpus, i.e., as done in (Arora et al., 2017, section 4.1). We see that the PCC results of CA are better and more “forgetting-resistant” than train-from-scratch SIF throughout the time course where more training data are incorporated. Consider, for example, the test result of news corpus (first panel) again. As more and more training corpora are used, the performance of train-from-scratch SIF drops with a noticeable slope; by contrast, the performance CA drops only slightly.

We defer additional experiments to the appendix, where we compared CA against more baseline methods and use different word vectors other than GloVe to carry out the experiments.

In this paper, we formulated a continual sentence representation learning task: Given a consecutive sequence of corpora presented in a time-course manner, how can we extract useful sentence-level features from new corpora while retaining those from previously seen corpora? We identified that the existing linear sentence encoders usually fall short at solving this task as they leverage on “common discourse” statistics estimated based on a priori fixed corpora. We proposed two sentence encoders (CA encoder and zero-shot CA encoder) and demonstrate their the effectiveness at the continual sentence representation learning task using STS datasets.

As the first paper considering continual sentence representation learning task, this work has been limited in a few ways – it remains for future work to address these limitations. First, it is worthwhile to incorporate more benchmarks such as GLUE (Wang et al., 2019) and SentEval (Conneau and Kiela, 2018) into the continual sentence representation task. Second, this work only considers the case of linear sentence encoder, but future research can attempt to devise (potentially more powerful) non-linear sentence encoders to address the same task. Thirdly, the proposed CA encoder operates at a corpus level, which might be a limitation if boundaries of training corpora are ill-defined. As a future direction, we expect to lift this assumption, for example, by updating the common direction statistics at a sentence level using Autoconceptors (Jaeger, 2014, section 3.14). Finally, the continual learning based sentence encoders should be applied to downstream applications in areas such as open domain NLP systems.

We compare the CA approach with the following variant of SIF. In the learning phase, for each corpus coming in, we learn and store a common direction (estimated based on the new corpus). In the testing phase, for a sentence in the testing corpora, we project it away from all common directions we have stored so far. We call this approach SIF with incremental deletions. The testing result is reported in Figure 2.

We have also tested the performance of CA without the initializing our concepor C0 by stop words. That is, we set C0

as a zero matrix in our CA algorithm. The results are reported in Figure

We see that, the CA initialized by stop words are more beneficial than without such initializations, especially for those testing corpora that are unseen in training data.

CA with the reverse-ordered sequence of training corpora

In the main body of the paper, we sequentially presented new training corpus for sentence encoders, from the corpora of largest size (news) to that of the smallest size (tweets). We have remarked that this choice of ordering is essentially arbitrary. We now report the results for the reverse order (i.e., from corpora of smallest size to that of largest size) in Figure 4. We see that CA approach still outperforms train-from-scratch SIF throughout the time course.

We repeat the experiments with Word2Vec (Mikolov et al., 2013)555https://code.google.com/archive/p/word2vec/ (pre-trained on Google News; 3 million tokens), Fasttext (Bojanowski et al., 2017) 666https://fasttext.cc/docs/en/english-vectors.html (pre-trained on Common Crawl; 2 million of tokens), and Paragram SL-999777https://cogcomp.org/page/resource_view/106 (fine-tuned based on GloVe). The pipeline of the experiments echo that of the main body of the paper.