Online petitions are a cost-effective way for citizens to collectively engage with policy-makers in a democracy. Predicting the popularity of a petition --- commonly measured by its signature count --- based on its textual content has utility for policy-makers as well as those posting the petition. In this work, we model this task using CNN regression with an auxiliary ordinal regression objective. We demonstrate the effectiveness of our proposed approach using UK and US government petition datasets. 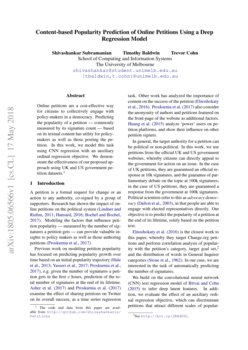 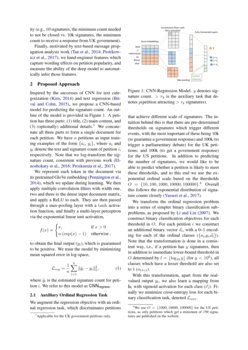 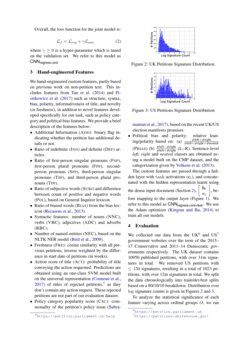 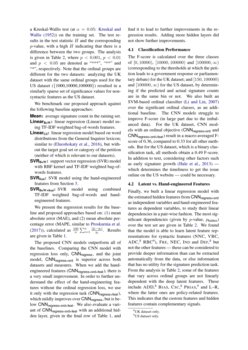 A petition is a formal request for change or an action to any authority, co-signed by a group of supporters. Research has shown the impact of online petitions on the political system Lindner and Riehm (2011); Hansard (2016); Bochel and Bochel (2017). Modeling the factors that influence petition popularity — measured by the number of signatures a petition gets — can provide valuable insights to policy makers as well as those authoring petitions Proskurnia et al. (2017).

In general, the target authority for a petition can be political or non-political. In this work, we use petitions from the official UK and US government websites, whereby citizens can directly appeal to the government for action on an issue. In the case of UK petitions, they are guaranteed an official response at 10k signatures, and the guarantee of parliamentary debate on the topic at 100k signatures; in the case of US petitions, they are guaranteed a response from the government at 100k signatures. Political scientists refer to this as advocacy democracy Dalton et al. (2003), in that people are able to engage with elected representatives directly. Our objective is to predict the popularity of a petition at the end of its lifetime, solely based on the petition text.

Elnoshokaty et al. (2016) is the closest work to this paper, whereby they target Change.org petitions and perform correlation analysis of popularity with the petition’s category, target goal set,222See http://bit.ly/2BXd0Sl. and the distribution of words in General Inquirer categories Stone et al. (1962). In our case, we are interested in the task of automatically predicting the number of signatures.

Inspired by the successes of CNN for text categorization Kim (2014) and text regression Bitvai and Cohn (2015), we propose a CNN-based model for predicting the signature count. An outline of the model is provided in Figure 1. A petition has three parts: (1) title, (2) main content, and (3) (optionally) additional details.333Applicable for the UK government petitions only. We concatenate all three parts to form a single document for each petition. We have n petitions as input training examples of the form {ai, yi}, where ai and yi denote the text and signature count of petition i, respectively. Note that we log-transform the signature count, consistent with previous work Elnoshokaty et al. (2016); Proskurnia et al. (2017).

We represent each token in the document via its pretrained GloVe embedding Pennington et al. (2014)

, which we update during learning. We then apply multiple convolution filters with width one, two and three to the dense input document matrix, and apply a ReLU to each. They are then passed through a max-pooling layer with a

tanhactivation function, and finally a multi-layer perceptron via the exponential linear unit activation,

to obtain the final output (yi), which is guaranteed to be positive. We train the model by minimizing mean squared error in log-space,

is the estimated signature count for petition

i. We refer to this model as CNNregress.

We augment the regression objective with an ordinal regression task, which discriminates petitions that achieve different scale of signatures. The intuition behind this is that there are pre-determined thresholds on signatures which trigger different events, with the most important of these being 10k (to guarantee a government response) and 100k (to trigger a parliamentary debate) for the UK petitions; and 100k (to get a government response) for the US petitions. In addition to predicting the number of signatures, we would like to be able to predict whether a petition is likely to meet these thresholds, and to this end we use the exponential ordinal scale based on the thresholds O={10,100,1000,10000,100000}.444We use O={1000,10000,100000} for the US petitions, as only petitions which get a minimum of 150 signatures are published on the website.

Overall this follows the exponential distribution of signature counts closely

we construct an additional binary vector

→oi, with a 0–1 encoding for each of the ordinal classes ({ai,yi,→oi}). Note that the transformation is done in a consistent way, i.e., if a petition has y signatures, then in addition to immediate lower-bound threshold in O determined by l=⌊log10y⌋ (for y<106), all classes which have a lesser threshold are also set to 1 (ot:t<l).

With this transformation, apart from the real-valued output yi, we also learn a mapping from hi with sigmoid activation for each class (→ri). Finally we minimize cross-entropy loss for each binary classification task, denoted Laux.

Overall, the loss function for the joint model is:

where γ≥0 is a hyper-parameter which is tuned on the validation set. We refer to this model as CNNregress+ord.

We hand-engineered custom features, partly based on previous work on non-petition text. This includes features from tan2014effect and piotrkowicz2017headlines such as structure, syntax, bias, polarity, informativeness of title, and novelty (or freshness), in addition to novel features developed specifically for our task, such as policy category and political bias features. We provide a brief description of the features below:

), and concatenated with the hidden representation learnt using the dense input document (Section

2), [hici], before mapping to the output layer (Figure 1). We refer to this model as CNNregress+ord+feat. We use the Adam optimizer Kingma and Ba (2014) to train all our models.

, we ran a Kruskal-Wallis test (at

: kruskal1952use) on the training set. The test results in the test statistic

H and the corresponding p-value, with a high H indicating that there is a difference between the two groups. The analysis is given in Table 2, where p<0.001, p<0.01 and p<0.05 are denoted as “***”, “**” and “*”, respectively. Note that the ordinal groups are different for the two datasets: analyzing the UK dataset with the same ordinal groups used for the US dataset ({1000,10000,100000}) resulted in a similarly sparse set of significance values for non-syntactic features as the US dataset.

We benchmark our proposed approach against the following baseline approaches:

linear regression model based on word distributions from the General Inquirer lexicon; similar to Elnoshokaty et al. (2016), but without the target goal set or category of the petition (neither of which is relevant to our datasets).

We present the regression results for the baseline and proposed approaches based on: (1) mean absolute error (MAE), and (2) mean absolute percentage error (MAPE, similar to Proskurnia et al. (2017)), calculated as 100n∑ni=1|^yi−yi|yi. Results are given in Table 1.

The F-score is calculated over the three classes of

for the US dataset, by determining if the predicted and actual signature counts are in the same bin or not. We also built an SVM-based ordinal classifier

Li and Lin (2007) over the significant ordinal classes, as an additional baseline. The CNN models struggle to improve F-score (in large part due to the imbalanced data). For the UK dataset, CNN models with an ordinal objective (CNNregress+ord and CNNregress+ord+feat) result in a macro-averaged F-score of 0.36, compared to 0.33 for all other methods. But for the US dataset, which is a binary classification task, all methods obtain a 0.49 F-score. In addition to text, considering other factors such as early signature growth Hale et al. (2013) — which determines the timeliness to get the issue online on the US website — could be necessary.

Finally, we built a linear regression model with the estimated hidden features from CNNregress+ord as independent variables and hand-engineered features as dependent variables, to study their linear dependencies in a pair-wise fashion. The most significant dependencies (given by p-value, phidden) over the test set are given in Table 2. We found that the model is able to learn latent feature representations for syntactic features (NNC, VBC, ADC,8 RBC9), Fre, NEC, Ind and Def,8 but not the other features — these can be considered to provide deeper information than can be extracted automatically from the data, or else information that has no utility for the signature prediction task. From the analysis in Table 2, some of the features that vary across ordinal groups are not linearly dependent with the deep latent features. These include ADD,8 Bias, Csc,888UK dataset only. Pbias,999US dataset only. and L–R, where the latter ones are policy-related features. This indicates that the custom features and hidden features contain complementary signals.

by 2.1% and 3.2%, and SVR by 7.2% and 13.7% on the UK and US datasets, resp. Although the ordinal classification performance is not very high, it must be noted that the data is heavily skewed (only 2% of the UK test-set falls in the

This paper has targeted the prediction of the popularity of petitions directed at the UK and US governments. In addition to introducing a novel task and dataset, contributions of our work include: (a) we have shown the utility of an auxiliary ordinal regression objective; and (b) determined which hand-engineered features are complementary to our deep learning model. In the future, we aim to study other factors that can influence petition popularity in conjunction with text, e.g., social media campaigns, news coverage, and early growth rates.

We thank the reviewers for their valuable comments. This work was funded in part by the Australian Government Research Training Program Scholarship, and the Australian Research Council.