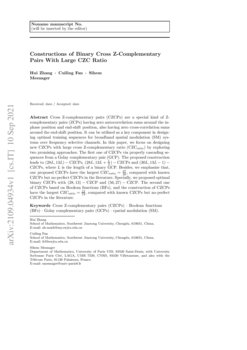 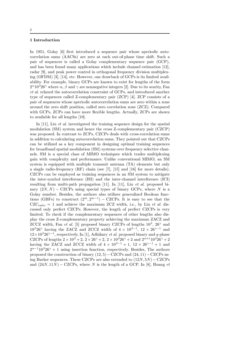 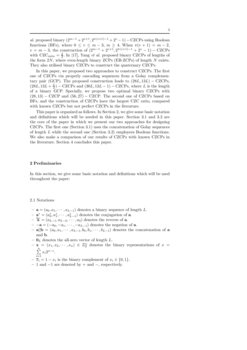 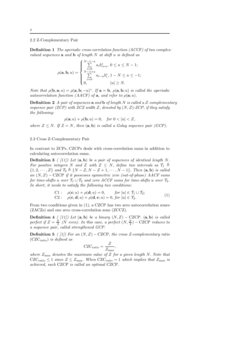 first introduced a sequence pair whose aperiodic autocorrelation sums (AACSs) are zero at each out-of-phase time shift. Such a pair of sequences is called a Golay complementary sequence pair (GCP), and has been found many applications which include channel estimation

2001-Spasojevic , radar2018-Kumari , and peak power control in orthogonal frequency division multiplexing (OFDM) 1999-GDJ ,2014-Wang , etc. However, one drawback of GCPs is its limited availability. For example, binary GCPs are known to exist for lengths of the form 2α10β26γ where α, β and γ are nonnegative integers 2003-7-Borwein . Due to its scarity, Fan et al. relaxed the autocorrelation constraint of GCPs, and introduced another type of sequences called Z-complementary pair (ZCP) 2007-8-Fan . ZCP consists of a pair of sequences whose aperiodic autocorrelation sums are zero within a zone around the zero shift position, called zero correlation zone (ZCZ). Compared with GCPs, ZCPs can have more flexible lengths. Actually, ZCPs are shown to available for all lengths 2011-1-Li .

In Liu-2020 , Liu et al. investigated the training sequence design for the spatial modulation (SM) system and hence the cross Z-complementary pair (CZCP) was proposed. In contrast to ZCPs, CZCPs deals with cross-correlation sums in addition to calculating autocorrelation sums. They pointed out that CZCPs can be utilized as a key component in designing optimal training sequences for broadband spatial modulation (SM) systems over frequency selective channels. SM is a special class of MIMO techniques which trades multiplexing gain with complexity and performance. Unlike conventional MIMO, an SM system is equipped with multiple transmit antenna (TA) elements but only a single radio-frequency (RF) chain (see 2008-Mesleh ,Yang-2005 and Yang-2016 for more details). CZCPs can be employed as training sequences in an SM system to mitigate the inter-symbol interference (ISI) and the inter-channel interference (ICI) resulting from multi-path propagation Liu-2020 . In Liu-2020 , Liu et al. proposed binary (2N,N)−CZCPs using special types of binary GCPs, where N is a Golay number. Besides, the authors also utilizes generalized Boolean functions (GBFs) to construct (2m,2m−1)−CZCPs. It is easy to see that the CZCratio=1 and achieve the maximum ZCZ width, i.e., by Liu et al. discussed only perfect CZCPs. However, the length of perfect CZCPs is very limited. To check if the complementary sequences of other lengths also display the cross Z-complementary property achieving the maximum ZACZ and ZCCZ width, Fan et al.Fan-2020 proposed binary CZCPs of lengths 10β, 26γ and 10β26γ having the ZACZ and ZCCZ width of 4×10β−1, 12×26γ−1 and 12×10β26γ−1, respectively. In Adhikary-2020 , Adhikary et al. proposed binary and q-phase CZCPs of lengths 2×10β+2, 2×26γ+2, 2×10β26γ+2 and 2α+110β26γ+2 having the ZACZ and ZCCZ width of 4×10β−1+1, 12×26γ−1+1 and 2α−110β26γ+1 using insertion function, respectively. Besides, The authors proposed the construction of binary (12,5)−CZCPs and (24,11)−CZCPs using Barker sequences. These CZCPs are also extended to (12N,5N)−CZCPs and (24N,11N)−CZCPs, where N is the length of a GCP. In Huang-2020 , Huang et al. proposed binary (2m−1+2v+1,2π(v+1)−1+2v−1)−CZCPs using Boolean functions (BFs), where 0≤v≤m−3, m≥4. When π(v+1)=m−2, v=m−3, the construction of (2m−1+2v+1,2π(v+1)−1+2v−1)−CZCPs with CZCratio=23. In yang-2021 , Yang et al. proposed binary CZCPs of lengths of the form 2N, where even-length binary ZCPs (EB-ZCPs) of length N exists. They also utilised binary CZCPs to construct the quaternary CZCPs.

In this paper, we proposed two approaches to construct CZCPs. The first one of CZCPs via properly cascading sequences from a Golay complementary pair (GCP). The proposed construction leads to (28L,13L)−CZCPs, (28L,13L+L2)−CZCPs and (30L,13L−1)−CZCPs, where L is the length of a binary GCP. Specially, we propose two optimal binary CZCPs with (28,13)−CZCP and (56,27)−CZCP. The second one of CZCPs based on BFs, and the construction of CZCPs have the largest CZC ratio, compared with known CZCPs but not perfect CZCPs in the literature.

This paper is organized as follows. In Section 2, we give some basic notation and definitions which will be needed in this paper. Section 3.1 and 3.2 are the core of the paper in which we present our two approaches for designing CZCPs. The first one (Section 3.1) uses the concatenation of Golay sequences of length L while the second one (Section 3.2) employees Boolean functions. We also make a comparison of our results of CZCPs with known CZCPs in the literature. Section 4 concludes this paper.

In this section, we give some basic notation and definitions which will be used throughout the paper:

A pair of sequences a and b of length N is called a Z-complementary sequence pair (ZCP) with ZCZ width Z, denoted by (N,Z)-ZCP, if they satisfy the following:

(Liu-2020 ) Let (a,b) be a pair of sequences of identical length N. For positive integers N and Z with Z≤N, define two intervals as T1≜{1,2,⋯,Z} and T2≜{N−Z,N−Z+1,⋯,N−1}. Then (a,b) is called an (N,Z)−CZCP if it possesses symmetric zero (out-of-phase) AACF sums for time-shifts u over T1∪T2 and zero ACCF sums for time-shifts u over T2. In short, it needs to satisfy the following two conditions:

where Zmax denotes the maximum value of Z for a given length N. Note that CZCratio≤1 since Z≤Zmax. When CZCratio=1 which implies that Zmax is achieved, such CZCP is called an optimal CZCP.

Obviously, the length of a sequence f constructed by the Boolean function with n variable is 2n. But, sometimes, we need sequence lengths that are not limited to be powers of 2. Therefore, we define the truncated sequence fL, where fL is the result by removing the last 2n−L elements from f, that is, fL=((−1)f0,(−1)f1,⋯,(−1)fL−1). Note that fi=f(i1,i2,⋯,in), where i=0,1,⋯,L−1.

3 A Construction of CZCPs From GCPs

The ultimate objective of this section is to design CZCPs. We shall follow two directions as presented in the next subsections 3.1 and 3.2.

3.1 Our first approach for constructing CZCPs

In this section, we will propose two constructions of binary CZCPs from binary GCPs. Before then, we introduce some lemmas which will be used in our construction.

Now we are ready to present the main result.

Let (a,b) be a binary GCP of length L. Define the sequence pair (s,t) with

Next, we present one example to illustrate our above theorem.

Let (a,b) be a binary GCP of length L. Define the sequence pair (s,t) with

The proof process is similar to that of Theorem 1, so we omit it here.

A summary of known CZCPs till date is given in Table 1. Compared with known CZCPs (but the length not Golay number) in Adhikary-2020 , Fan-2020 and yang-2021 , we proposed the construction of CZCPs have the largest CZCratio=2728.

3.2 Constructions of CZCPs from BFs

In this section, two constructions of CZCPs based on BFs are given and the CZC ratios of the CZCPs are also discussed. Compared with known CZCPs in the literature, we proposed CZCPs have the largest CZCratio. Before then, we introduce the following lemma which is useful for our construction.