Video understanding is emerging as a new paradigm for studying human-like AI. Question-and-Answering (Q A) is used as a general benchmark to measure the level of intelligence for video understanding. While several previous studies have suggested datasets for video Q A tasks, they did not really incorporate story-level understanding, resulting in highly-biased and lack of variance in degree of question difficulty. In this paper, we propose a hierarchical method for building Q A datasets, i.e. hierarchical difficulty levels. We introduce three criteria for video story understanding, i.e. memory capacity, logical complexity, and DIKW (Data-Information-Knowledge-Wisdom) pyramid. We discuss how three-dimensional map constructed from these criteria can be used as a metric for evaluating the levels of intelligence relating to video story understanding. 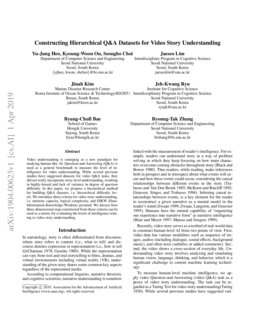 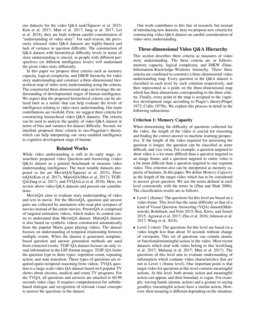 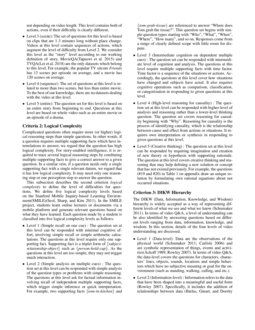 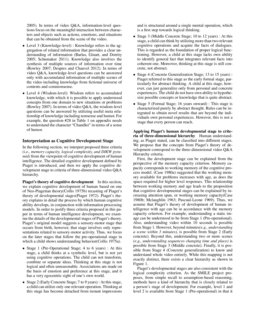 Toward a Human-Level Video Understanding Intelligence

We aim to develop an AI agent that can watch video clips and have a conv...
Yu-Jung Heo, et al. ∙

In narratology, story is often differentiated from discourse, where story refers to content (i.e., what to tell) and discourse denotes expression or representation (i.e., how to tell it)[Chatman1978, Genette1980]. While the representation can vary from text and oral storytelling to films, dramas, and virtual environments including virtual reality (VR), understanding of the given story shares some common key aspects regardless of the represented media.

According to computational linguists, narrative theorists, and cognitive scientists, narrative understanding is somehow linked with the measurement of reader’s intelligence. For example, readers can understand story as a way of problem solving in which they keep focusing on how main characters overcome coming obstacles throughout story [Black and Bower1980]. Thus readers, while reading, make inferences both in prospect and in retrospect about what events will occur and how these events could occur, considering the causal relationships between different events in the story [Trabasso and Van Den Broek1985, McKoon and Ratcliff1992, Graesser, Singer, and Trabasso1994]. Inferring causal relationships between events, is a key element for the reader to reconstruct a given narrative as a mental model in the reader’s mind [Zwaan1999, Zwaan, Langston, and Graesser1995]. Humans have the natural capability of “organizing our experience into narrative form” as narrative intelligence [Blair and Meyer1997, Mateas and Sengers1999].

MovieQA aims to evaluate story understanding of video and text in movie. For the MovieQA, question and answer pairs are collected by annotators who read plot synopses of movies instead of the entire movies. PororoQA is comprised of targeted animation videos, which makes its content easier to understand than MovieQA dataset. MarioQA dataset is also based on synthetic videos constructed automatically from the popular Mario game playing videos. The dataset focuses on understanding of temporal relationship between multiple events. When the dataset is generated, template-based question and answer generation methods are used from extracted events. TGIF-QA dataset focuses on only visual information in the GIF-format images. TGIF-QA limits the question type to three types: repetition count, repeating action, and state transition. Those types of questions are required spatio-temporal reasoning from videos. TVQA question is a large-scale video QA dataset based on 6 popular TV shows about sitcoms, medical and crime TV programs. For the TVQA, all questions and answers are attached to 60-90 seconds video clips. It requires comprehension for subtitle-based dialogue and recognition of relevant visual concepts to answer the questions in the dataset.

Our work contributes to this line of research, but instead of introducing new datasets, here we propose new criteria for constructing video Q&A dataset on careful consideration of video story understanding.

This section describes three criteria as measures of video story understanding. The three criteria are as follows: memory capacity, logical complexity, and DIKW (Data-Information-Knowledge-Wisdom) hierarchy. These three criteria are combined to construct a three-dimensional video understanding map. Every question in the Q&A dataset is classified in each level by each criterion respectively, and then represented as a point on the three-dimensional map which has three dimensions corresponding to the three criteria. Finally, every point in the map is assigned to the cognitive development stage according to Piaget’s theory

[Piaget1972, Collis1975b]. We explain this process in detail in the following subsections.

Complicated questions often require more (or higher) logical reasoning steps than simple questions. In other words, if a question requires multiple supporting facts which have interrelations to answer, we regard that the question has high logical complexity. For story-enabled intelligence, it is required to trace several logical reasoning steps by combining multiple supporting facts to give a correct answer to a given question. In a similar vein, if a question needs only a single supporting fact with a single relevant datum, we regard that it has low logical complexity. It may need only one reasoning step or one perception step to answer the question.

The DIKW (Data, Information, Knowledge, and Wisdom) hierarchy is widely accepted as a way of representing different levels of what we see and what we know [Schumaker2011]. In terms of video Q&A, a level of understanding can be also identified by answering questions based on different levels ranging from data, information, knowledge, and wisdom. In this section, details of the four levels of video understanding are discussed.

In this section, we explain cognitive development of human based on one of Neo-Piagetian theory[Collis1975b] recasting of Piaget’s theory of developmental stages[Piaget1972]. Piaget’s theory explains in detail the process by which human cognitive ability develops, in conjunction with information processing models. In order to justify three criteria proposed in this paper in terms of human intelligence development, we examine the details of the developmental stages of Piaget’s theory. Piaget’s original model suggests a sensory-motor stage that occurs from birth, however, that stage involves only representations related to sensory-motor activity. Thus, we focus on the later stages that follow the pre-operational stage in which a child shows understanding behavior[Collis1975a].

Human understanding, as Piaget stated, can be classified into different stages. We propose that the concepts from Piaget’s theory of development correspond to the three-dimensional video Q&A Hierarchy criteria.

Piaget’s developmental stages are also consistent with the logical complexity criterion. As the SMILE project proposes, from simple recall to assumption-based reasoning, methods have a kind of hierarchy that is closely related to a person’s stage of development. For example, level 1 and level 2 is available from Stage 1 (Pre-operational) in that it needs a simple call. Specifically, level 1 requires one supporting fact (e.g., {jacket-is-black}), on the other hand, level 2 requires independent multiple supporting facts. Level 3 is available from Stage 3 (Middle concrete), in that this level can be understood using dependent multiple supporting facts across time. Level 4 is available from Stage 4 (Concrete generalization), because this level requires a higher thought on causality in relation to “Why”. Finally, level 5 is available from Stage 5 (Formal Stage), as it requires creativity and abstract thinking about new ideas. As such, each phase of SMILE can be expressed as roughly equivalent to the human developmental stage postulated by Piaget[Collis1972].

Piaget’s human developmental stages are not exactly consistent with the DIKW hierarchy criterion. However, data-level is possible from the Stage 1 (Pre-operational) in terms of providing simple factual data. Information-level is possible from Stage 3 (Middle concrete), because it identifies a relationship between some real world entities. Knowledge-level is roughly equivalent from Stage 4 (Concrete generalization), as both are incapable of inferring information from abstract variables. Finally, wisdom-level in DIKW hierarchy criterion is possible from Stage 5 (Formal stage), in that it can be inferred and applied to new situations like knowledge transferring[Collis1975a]. Figure 2 shows three-dimensional hierarchical map for each question represented in Table 1 on appendix. Three coordinates of each point are assigned by the definition of level of three criteria, and matched to one developmental stage which is the highest stage among derived three stages following the interpretation of Figure 1. For example, a question “What did Joey and Chandler do at Ross house?” is set {3, 2, 1} level for three criteria. Each level can be developed from {2, 1, 1} stage, so that the question is mapped Stage 2 which is the highest stage among {2, 1, 1} stage.

Moreover, comparing with human development stages, machine learning approach requires clear and explicit specification. For example, in Collis’ classification, each stage has an approximate two-year interval, while the machine needs to be viewed with more detailed and specific classification criterion - such as either every month or every season.

As future work, we plan to extend the proposed criteria to reflect some viewpoints from cognitive narratology (e.g., Zwaan’s five index model of narrative understanding including space, time, characters, goals, and causation[Zwaan1999]). We also plan to use our proposed criteria as a guideline for video story understanding to construct a carefully designed hierarchical dataset. The proposed video Q&A hierarchy can be used as a metric for the developmental level of machine intelligence, and as a guidance to what dataset should be collected to study the desired level of machine intelligence.