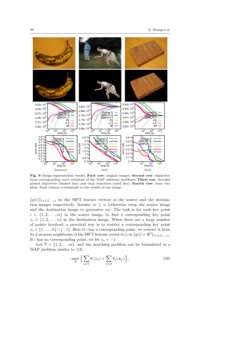 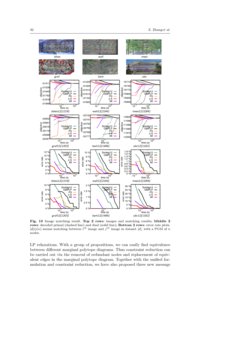 An Efficient Message-Passing Algorithm for the M-Best MAP Problem

Much effort has been directed at algorithms for obtaining the highest pr...
Dhruv Batra, et al. ∙

Linear Programming (LP) relaxations have been used to approximate the maximum a posteriori (MAP) inference of Probabilistic Graphical Models (PGMs) Koller and Friedman (2009) by enforcing local consistency over edges or clusters. An attractive property of this approach is that it is guaranteed to find the optimal MAP solution when the labels are integers. This is particularly significant in light of the fact that Kumar et al.showed that LP relaxation provides a better approximation than Quadratic Programming relaxation and Second Order Cone Programming relaxation Kumar et al (2009). Despite their success, there remain a variety of large-scale problems that off-the-shelf LP solvers can not solve Yanover et al (2006). Moreover, it has been shown Yanover et al (2006); Sontag et al (2008) that LP relaxations have a large gap between the dual objective and the decoded primal objective and fail to find the optimal MAP solution in many real-world problems.

In response to this shortcoming a number of dual message passing methods have been proposed including Dual Decompositions Komodakis et al (2007); Sontag et al (2011, 2012) and Generalised Max Product Linear Programming (GMPLP) Globerson and Jaakkola (2007). These methods can still be computationally expensive when there are a large number of constraints in the LP relaxations. It is desirable to reduce the number of constraints in order to reduce computational complexity without sacrificing the quality of the solution. However, this is non-trivial, because for a MAP inference problem the dimension of the primal variable can be different in various LP relaxations. This also presents a barrier for effectively comparing the quality of two LP relaxations and their corresponding message passing methods. Furthermore, these message-passing methods may get stuck in non-optimal solutions due to the non-smooth dual objectives Schwing et al (2012); Hazan and Shashua (2010); Meshi et al (2012).

We consider MAP inference over factor graphs with discrete states. For generality, we will use higher order potentials (where possible) throughout the paper.

Assume that there are n variables X1,⋯,Xn, each taking discrete states xi∈ Vals(Xi). Let \Vcal={1,⋯,n} denote the node set, and let \Ccal be a collection of subsets of \Vcal. \Ccal has an associated group of potentials θ={θc(\xbc)∈R|c∈\Ccal}, where \xbc=[xi]i∈c. Given a graph G=(\Vcal,\Ccal) and potentials θ, we consider the following exponential family distribution (Wainwright and Jordan, 2008):

where \xb=[x1,x2,…,xn]∈\Xcal, and Z=∑\xb∈\Xcalexp(∑c∈\Ccalθc(\xbc)) is known as a normaliser, or partition function. The goal of MAP inference is to find the MAP assignment, \xb∗, that maximises p(\xb|θ). That is

Here we slightly generalise the notation of \xbc to \xbs=[xi]i∈s, \xbt=[xi]i∈t and \xbf=[xi]i∈f where s,t,f are subsets of \Vcal reserved for later use.

in which the feasible set, \Mcal(G), is known as the marginal polytope (Wainwright and Jordan, 2008), defined as follows

Here the first two groups of constraints specify that q(\xb) is a distribution over \Xcal, and we refer to the last group of constraints as the global marginalisation constraint, which guarantees that for arbitrary \mub in \Mcal(G), all μc(\xbc),c∈\Ccal can be obtained by marginalisation from a common distribution q(\xb) over \Xcal. In general, exponentially many inequality constraints (q(\xb)⩾0, ∀\xb) are required to define a marginal polytope, which makes the LP hard to solve. Thus eq:LPProb is often relaxed with a local marginal polytope \McalL(G) to obtain the following LP relaxation

Compared to the marginal polytope, for arbitrary \mub in a local marginal polytope, all \mubc(\xbc) may not be the marginal distributions of a common distribution q(\xb) over \Xcal, but there are much fewer constraints in local marginal polytope. As a result, the LP relaxation can be solved more efficiently. This is of particular practical significance because state-of-the-art interior point or simplex LP solvers can only handle problems with up to a few hundred thousand variables and constraints while many real-world datasets demand far more variables and constraints (Yanover et al, 2006; Kumar et al, 2009).

Then they consider the following LP relaxation

where the local marginal polytope \McalgL(G) is defined as

with \Scalg(c)={s|s∈\Ical,s⊆c}. To derive a desirable dual formulation, they replace the third group of constraints with the following equivalent constraints

where μc∖s,s(\xbc∖s,\xbs) is known as the copy variable. Let βc∖s,s(\xbc∖s,\xbs) be the dual variable associated with the first group of the new constraints above, using standard Lagrangian yields the following dual problem:

Let λc→s(\xbs)=max\xbc∖sβc∖s,s(\xbc∖s,\xbs), they use a coordinate descent method to minimise the dual by picking up a particular c∈\Ccal and updating all λ∗c→s(\xbs) as following:

with a different local marginal polytope \McaldL(G) defined as

Let λfi(xi) be the Lagrangian multipliers corresponding to each ∑\xbf∖{i}μf(\xbf)=μi(xi) for each f∈\Fcal,i∈f,xi, one can show that the standard Lagrangian duality is

Compared to GMPLP, the local marginal polytope in the Dual Decomposition has much fewer constraints. In general for an arbitrary graph G=(\Vcal,\Ccal), \McaldL(G) is looser than \McalgL(G) (\McaldL(G)⊇\McalgL(G)) .

with a local marginal polytope \McaloL(G),

They added cycle inequalities to tighten the problem. Reducing the primal feasible set may reduce the maximum primal objective, which reduces the minimum dual objective. They showed that finding the “tightest” cycles, which maximise the decrease in the dual objective, is NP-hard. Thus, instead, they looked for the most “frustrated” cycles, which correspond to the cycles with the smallest LHS of their cycle inequalities. Searching for “frustrated” cycles, adding the cycles’ inequalities and updating the dual is repeated until the algorithm converges.

When using the local marginal polytope the objective of the LP relaxation depends only on those μc(\xbc),c∈\Ccal. We thus reformulate the LP Relaxation into a unified formulation as follows:

where \mub is defined in def:mub. The local marginal polytope, \McalL(G,\Ccal′,\Scal(\Ccal′)), can be defined in a unified formulation as

The first two groups of constraints in \McalL(G,\Ccal′,\Scal(\Ccal′)) ensure that ∀c∈\Ccal′, μc(\xbc) is a distribution over Vals(\xbc). We refer to the third group of constraints as local marginalisation constraints.

Here we show that both GMPLP and Dual Decomposition can be reformulated by eq:LPR.

where \McalL(G,\Ccal,\Scalg(\Ccal)) is defined as

For Dual Decomposition, we let \Ccald={{i}|i∈\Vcal}∪\Fcal, and

where \McalL(G,\Ccald,\Scald(\Ccald)) is defined as

Similarly, for Dual Decomposition with cycle inequalities in eq:cycle, we define \Scalo(c) as follows

Let λc→s(\xbs) be the Lagrangian multipliers (dual variables) corresponding to the local marginalisation constraints ∑\xbc∖sμc(\xbc)=μs(\xbs) for each c∈\Ccal′,s∈\Scal(c),\xbs. Define

and the following variables ∀t∈\Tcal,\xbt:

where 1(S) is the indicator function, which is equal to 1 if the statement S is true and 0 otherwise. Define \lambdab=(λc→s(\xbs))c∈\Ccal′,s∈\Scal(c), we have the dual problem (see derivation in Section LABEL:sec:der_tdd_mp of the supplementary).

A solution is provided in the proposition below.

The derivation of eq:DualNotArrange and eq:subopt, and the proof of Proposition 1 are provided in Section LABEL:sec:der_tdd_mp in the supplementary material. The bt(\xbt) are often referred to as beliefs, and λc→s(\xbs) messages (see Globerson and Jaakkola (2007); Sontag et al (2008)). In eqn:MSGUPD, λc(\xbc) and γs(\xbs), λ−cs(\xbs),∀s∈\Scal(c)∖{c} are known, and they do not depend on λc→s(\xbs). We summarise the message updating procedure in Algorithm 1. Dual Decomposition can be seen as a special case of GDD with a specific local marginal polytope \McalL(G,\Ccal,\Scald(\Ccal)) in eq:MLDref.

The beliefs bt(\xbt),t∈\Tcal are computed via eq:bcdef to evaluate the dual objective and decode an integer solution of the original MAP problem. For a g(λ) obtained via GDD based message passing, we find \xb∗ (so called decoding) via

Here we use ∈ instead of = is because there may be multiple maximisers. In fact, if a node i∈\Vcal is also an extended cluster or sub-cluster (∃t∈\Tcal, s.t. t={i}), then we perform more efficient decoding via

Further discussion on decoding is deferred to Proposition 4 and Section 3.5.

In this part we analyse the convergence and decoding consistency of GDD message passing.

GDD essentially iterates over c∈\Ccal′, and updates the messages via eqn:MSGUPD. The dual decrease defined below

plays a role in the analysis of GDD.

For any c∈\Ccal′, the dual decrease

The proof is provided in Section LABEL:sec:der_dual_decrease of the supplementary. A natural question is whether GDD is convergent, which is answered by the following proposition.

According to duality and LP relaxation, we have for arbitrary λ,

By Proposition 2 in each single step of coordinate descent, the dual decrease d(c) is non-negative. Thus GDD message passing produces a monotonically decreasing sequence of g(λ). Since the sequence has a lower bound, the sequence must converge.

Note that Proposition 3 does not guarantee g(λ) reaches the limit in finite steps in GDD (GMPLP and Dual Decomposition have the same issue). However, in practice we observe that GDD often converges in finite steps. The following proposition in part explains why the decoding in eq:decode is reasonable.

Proposition 4 essentially states that there exist two maximisers that agree on \xbs. This in part justifies decoding via eq:decode (s is a node). Further discussion on decoding is provided in Section 3.5.

It’s obvious that the solution of GDD is exact, if the gap between the dual objective and the decoded primal objective is zero. Here we show that the other requirements for the exact solution also hold.

If there exists \xb that maximises bt(\xbt),∀t∈\Tcal, the solution of GDD is exact.

The proof is provided in Section LABEL:sec:proof_propos_exact of the supplementary.

GDD involves updating many messages (λc(\xbc) and γs(xs),λ−sc(xs),∀c∈\Ccal′,s∈\Scal(c)∖{c}). These messages are then used to compute the beliefs bt(\xbt),∀t∈\Tcal (see eq:bcdef). Here we show that we can directly update the beliefs without computing and storing messages.