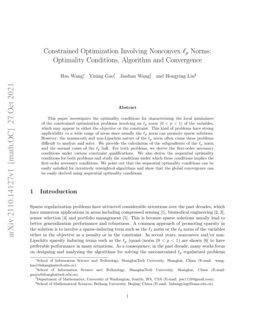 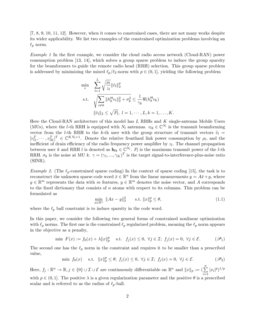 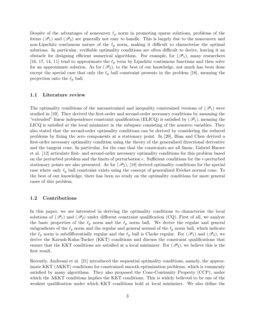 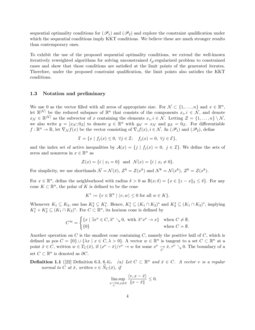 Effcient Projection Onto the Nonconvex ℓ_p-ball

This paper primarily focuses on computing the Euclidean projection of a ...
Hao Wang, et al. ∙

Optimality of orders one to three and beyond: characterization and evaluation complexity in constrained nonconvex optimization

l_2,p Matrix Norm and Its Application in Feature Selection

Recently, l_2,1 matrix norm has been widely applied to many areas such a...
Liping Wang, et al. ∙

Sparse regularization problems have attracted considerable attentions over the past decades, which have numerous applications in areas including compressed sensing [5], biomedical engineering [22, 10], sensor selection [1] and portfolio management [6]. This is because sparse solutions usually lead to better generalization performance and robustness. A common approach of promoting sparsity in the solution is to involve a sparse-inducing term such as the ℓ1 norm or the ℓ0 norm of the variables either in the objective as a penalty or in the constraint. In recent years, nonconvex and/or non-Lipschitz sparsity inducing terms such as the ℓp (quasi-)norm (0<p<1) are shown [13] to have preferable performance in many situations. As a consequence, in the past decade, many works focus on designing and analyzing the algorithms for solving the unconstrained ℓp regularized problems [23, 8, 11, 20, 18, 9]. However, when it comes to constrained cases, there are not many works despite its wider applicability. We list two examples of the constrained optimization problems involving an ℓp norm.

Example 1 In the first example, we consider the cloud radio access network (Cloud-RAN) power consumption problem [15, 19], which solves a group sparse problem to induce the group sparsity for the beamformers to guide the remote radio head (RRH) selection. This group sparse problem is addressed by minimizing the mixed ℓp/ℓ2-norm with p∈(0,1], yielding the following problem

Here the Cloud-RAN architecture of this model has L RRHs and K single-antenna Mobile Users (MUs), where the l-th RRH is equipped with Nl antennas. vlk∈CNl

is the transmit beamforming vector from the

l-th RRH to the k-th user with the group structure of transmit vectors ~vl=[vTl1,⋯,vTlK]T∈CKNl×1. Denote the relative fronthaul link power consumption by ρl, and the inefficient of drain efficiency of the radio frequency power amplifier by zl. The channel propagation between user k and RRH l is denoted as hlk∈CNl. Pl is the maximum transmit power of the l-th RRH. σk is the noise at MU k. γ=(γ1,...,γK)T is the target signal-to-interference-plus-noise ratio (SINR).

Example 2. (The ℓp-constrained sparse coding) In the context of sparse coding [17], the task is to reconstruct the unknown sparse code word ¯x∈Rn from the linear measurements y=A¯x+y, where y∈Rm represents the data with m features, y∈Rm denotes the noise vector, and A corresponds to the fixed dictionary that consists of n atoms with respect to its columns. This problem can be formulated as

where the ℓp ball constraint is to induce sparsity in the code word.

In this paper, we consider the following two general forms of constrained nonlinear optimization with ℓp norms. The first one is the constrained ℓp regularized problem, meaning the ℓp norm appears in the objective as a penalty,

The second one has the ℓp norm in the constraint and requires it to be smaller than a prescribed value,

Here, fj:Rn→R,j∈{0}∪I∪E are continuously differentiable on Rn and ∥x∥p:=(n∑i=1|xi|p)1/p with p∈(0,1]. The positive λ is a given regularization parameter and the positive θ is a prescribed scalar and is referred to as the radius of ℓp-ball.

Despite of the advantages of nonconvex ℓp norm in promoting sparse solutions, problems of the forms (P1) and (P2) are generally not easy to handle. This is largely due to the nonconvex and non-Lipschitz continuous nature of the ℓp norm, making it difficult to characterize the optimal solutions. In particular, verifiable optimality conditions are often difficult to derive, leaving it an obstacle for designing efficient numerical algorithms. For example, for (P1), many researchers [7, 12, 19, 18] tend to approximate the ℓp term by Lipschitz continuous functions and then solve for an approximate solution. As for (P2), to the best of our knowledge, not much has been done except the special case that only the ℓp ball constraint presents in the problem [24], meaning the projection onto the ℓp ball.

and the index set of active inequalities by A(x)={j | fj(x)=0, j∈I}. We define the sets of zeros and nonzeros in x∈Rn as

For x∈Rn, define the neighborhood with radius δ>0 as B(x;δ)={x∈∥z−x∥2≤δ}. For any cone K⊂Rn, the polar of K is defined to be the cone

Another operation on C is the smallest cone containing C, namely the positive hull of C, which is defined as pos C={0}∪{λx∣x∈C,λ>0}. A vector w∈Rn is tangent to a set C⊂Rn at a point ¯x∈C, written w∈TC(¯x), if (xν−¯x)/τν→w for some xν→C¯x,τν↘0. The boundary of a set C⊂Rn is denoted as ∂C.

A function f:Rn→¯R is called subdifferentially regular at ¯x if f(¯x) is finite and epi f is Clarke regular at (¯x,f(¯x)) as a subset of Rn×R.

Denote ϕ(x)=∥x∥pp and the ℓp norm ball Θ:={x∈Rn∣ϕ(x)≤θ}. In this subsection, we provide basic properties about ϕ(x) and Θ. In particular, we derive regular and general subgradients of ϕ and the regular and the general normal cones of Θ, and then show that the ϕ is subdifferentially regular and Θ is Clarke regular on Rn.

The regular, general, and horizon subgradients of ϕ can be calculated as follows.

For any ¯x∈Rn, it holds that

It then follows from [14, Corollary 8.11] that ϕ is subdifferentially regular at any x∈Rn. ∎

The regular and general normal vectors can be calculated as follows.

Therefore, it holds that

Now we have from [14, Theorem 8.15] the following first-order necessary condition for (P1). For (P2), we only focus on the local minimizers ¯x on the boundary of the ℓp ball, i.e., ∥¯x∥pp=θ; otherwise, the characterization of local minimizers reverts to the case of traditional constrained nonlinear problems.

Obviously, to find an optimal solution, we can only focus on the top semicircle of the given ball, so that the original problem is equivalent to

To make condition (2.4) for (P1) informative, we need to clarify when −v∈NΓ(¯x) happens and how to calculate the elements in NΓ(¯x). For this purpose, we define the following extended Mangasarian-Fromovitz constraint qualification (EMFCQ).

Obviously, the EMFCQ is a weaker condition than the ELICQ proposed in [21]. Moreover, if the EMFCQ holds at ¯x∈Γ for Γ, then the MFCQ holds naturally true at ¯x for Γ; letting

In fact, the EMFCQ guarantees the condition in Theorem 2.3 about NΓ holds true.

We call the conditions (2.8) the Karush-Kuhn-Tucker (KKT) conditions for (P1). Using the notation of ΛΓ, it can also be equivalently written as

and ΛΓ is replaced with NΓ when Γ is a closed and convex set.

We also consider other verifiable forms of condition (2.5) if some constraint qualification (CQ) is satisfied at ¯x. For ¯x∈Θ∩Γ, define the extended linearized cone ΥΘ∩Γ(¯x) as:

then the first-order necessary condition (2.5) is satisfied at ¯x.

Equivalently, the dual form of EMFCQ for (P2) holds at ¯x∈Θ∩Γ if yj=0,j∈{0}∪¯A is the unique solution of

We now state the necessary optimality conditions for various situations.

We call the conditions (2.13) the Karush-Kuhn-Tucker (KKT) conditions for (P2). Using the notation of ΛΓ, it can also be equivalently written as

and ΛΓ is replaced with NΓ when Γ is a closed and convex set.

In this section, we turn to study the sequential optimality conditions under the approximate Karush-Kuhn-Tucker (AKKT) conditions, which are defined as follows.