An important form of prior information in clustering comes in form of cannot-link and must-link constraints. We present a generalization of the popular spectral clustering technique which integrates such constraints. Motivated by the recently proposed 1-spectral clustering for the unconstrained problem, our method is based on a tight relaxation of the constrained normalized cut into a continuous optimization problem. Opposite to all other methods which have been suggested for constrained spectral clustering, we can always guarantee to satisfy all constraints. Moreover, our soft formulation allows to optimize a trade-off between normalized cut and the number of violated constraints. An efficient implementation is provided which scales to large datasets. We outperform consistently all other proposed methods in the experiments. 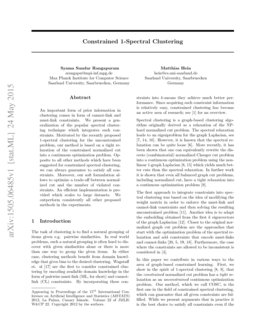 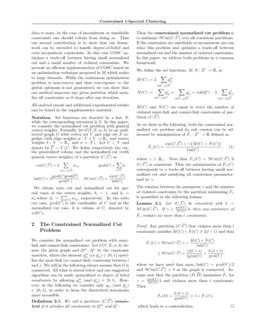 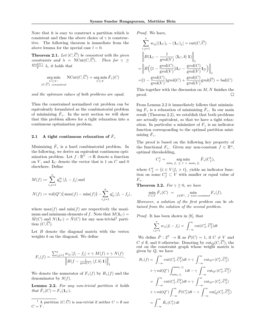 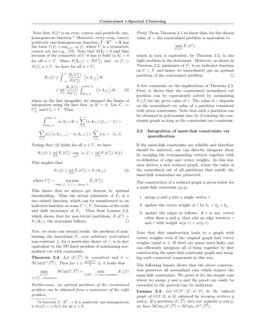 The task of clustering is to find a natural grouping of items given e.g. pairwise similarities. In real world problems, such a natural grouping is often hard to discover with given similarities alone or there is more than one way to group the given items. In either case, clustering methods benefit from domain knowledge that gives bias to the desired clustering. Wagstaff et. al [17] are the first to consider constrained clustering by encoding available domain knowledge in the form of pairwise must-link (ML, for short) and cannot-link (CL) constraints. By incorporating these constraints into k-means they achieve much better performance. Since acquiring such constraint information is relatively easy, constrained clustering has become an active area of research; see [1] for an overview.

The first approach to integrate constraints into spectral clustering was based on the idea of modifying the weight matrix in order to enforce the must-link and cannot-link constraints and then solving the resulting unconstrained problem [11]. Another idea is to adapt the embedding obtained from the first keigenvectors of the graph Laplacian [12]. Closer to the original normalized graph cut problem are the approaches that start with the optimization problem of the spectral relaxation and add constraints that encode must-links and cannot-links [20, 5, 19, 18]. Furthermore, the case where the constraints are allowed to be inconsistent is considered in [4].

In this paper we contribute in various ways to the area of graph-based constrained learning. First, we show in the spirit of 1-spectral clustering [8, 9], that the constrained normalized cut problem has a tight relaxation as an unconstrained continuous optimization problem. Our method, which we call COSC, is the first one in the field of constrained spectral clustering, which can guarantee that all given constraints are fulfilled. While we present arguments that in practice it is the best choice to satisfy all constraints even if the data is noisy, in the case of inconsistent or unreliable constraints one should refrain from doing so. Thus our second contribution is to show that our framework can be extended to handle degree-of-belief and even inconsistent constraints. In this case COSC optimizes a trade-off between having small normalized cut and a small number of violated constraints. We present an efficient implementation of COSC based on an optimization technique proposed in [9] which scales to large datasets. While the continuous optimization problem is non-convex and thus convergence to the global optimum is not guaranteed, we can show that our method improves any given partition which satisfies all constraints or it stops after one iteration.

All omitted proofs and additional experimental results can be found in the supplementary material.

Notation. Set functions are denoted by a hat, ^S, while the corresponding extension is S. In this paper, we consider the normalized cut problem with general vertex weights. Formally, let G(V,E,w,b) be an undirected graph G with vertex set V and edge set E together with edge weights w:V×V→R+ and vertex weights b:V→R+ and n=|V|. Let C⊂V and denote by ¯¯¯¯C=V∖C. We define respectively the cut, the generalized volume and the normalized cut (with general vertex weights) of a partition (C,¯¯¯¯C) as

We obtain ratio cut and normalized cut for special cases of the vertex weights, bi=1, and bi=di,where di=∑nj=1wij, respectively. In the ratio cut case, gvol(C) is the cardinality of C and in the normalized cut case, it is volume of C, denoted by vol(C).

We consider the normalized cut problem with must-link and cannot-link constraints. Let G(V,E,w,b) denote the given graph and Qm, Qc be the constraint matrices, where the element qmij (or qcij) ∈{0,1} specifies the must-link (or cannot-link) constraint between i and j. We will in the following always assume that G is connected. All what is stated below and our suggested algorithm can be easily generalized to degree of belief constraints by allowing qmij (and qcij) ∈[0,1]. However, in the following we consider only qij (and qcij) ∈{0,1}, in order to keep the theoretical statements more accessible.

We call a partition (C,¯¯¯¯C) consistent if it satisfies all constraints in Qm and Qc.

We define the set functions, M,N:2V→R, as

^M(C) and ^N(C) are equal to twice the number of violated must-link and cannot-link constraints of partition (C,¯¯¯¯C).

As we show in the following, both the constrained normalized cut problem and its soft version can be addressed by minimization of ^Fγ:2V→R defined as

where γ∈R+. Note that ^Fγ(C)=NCut(C,¯¯¯¯C) if (C,¯¯¯¯C) is consistent. Thus the minimization of ^Fγ(C) corresponds to a trade-off between having small normalized cut and satisfying all constraints parameterized by γ.

The relation between the parameter γ and the number of violated constraints by the partition minimizing ^Fγ is quantified in the following lemma.

which leads to a contradiction. ∎

Note that it is easy to construct a partition which is consistent and thus the above choice of γ is constructive. The following theorem is immediate from the above lemma for the special case l=0.

and the optimum values of both problems are equal.

Thus the constrained normalized cut problem can be equivalently formulated as the combinatorial problem of minimizing ^Fγ. In the next section we will show that this problem allows for a tight relaxation into a continuous optimization problem.

2.1 A tight continuous relaxation of ^Fγ

Minimizing ^Fγ is a hard combinatorial problem. In the following, we derive an equivalent continuous optimization problem. Let f:RV→R denote a function on V, and 1C

denote the vector that is 1 on

For any non-trivial partition it holds that ^Fγ(C)=Fγ(1C).

This together with the discussion on M,N finishes the proof. ∎

From Lemma 2.2 it immediately follows that minimizing Fγ is a relaxation of minimizing ^Fγ. In our main result (Theorem 2.2), we establish that both problems are actually equivalent, so that we have a tight relaxation. In particular a minimizer of Fγ is an indicator function corresponding to the optimal partition minimizing ^Fγ.

The proof is based on the following key property of the functional Fγ. Given any non-constant f∈Rn, optimal thresholding,

where Ctf={i∈V|fi>t}, yields an indicator function on some C∗f⊂V with smaller or equal value of Fγ.

where in the last inequality we changed the limits of integration using the fact that ⟨u,1⟩=0. Let Ci:=Ctfi and C0=V. Then

This shows that we always get descent by optimal thresholding. Thus the actual minimizer of Fγ is a two-valued function, which can be transformed to an indicator function on some C⊂V, because of the scale and shift invariance of Fγ. Then from Lemma 2.2, which shows that for non-trivial partitions, ^Fγ(C)=Fγ(1C), the statement follows. ∎

Furthermore, an optimal partition of the constrained problem can be obtained from a minimizer of the right problem.

From Theorem 2.1 we know that, for the chosen value of γ, the constrained problem is equivalent to

which in turn is equivalent, by Theorem 2.2, to the right problem in the statement. Moreover, as shown in Theorem 2.2, minimizer of Fγ is an indicator function on C⊂V and hence we immediately get an optimal partition of the constrained problem. ∎

2.2 Integration of must-link constraints via sparsification

The construction of a reduced graph is given below for a must-link constraint (p,q).

Note that this construction leads to a graph with vertex weights even if the original graph had vertex weights equal to 1. If there are many must-links, one can efficiently integrate all of them together by first constructing the must-link constraint graph and merging each connected component in this way.

The following lemma shows that the above construction preserves all normalized cuts which respect the must-link constraints. We prove it for the simple case where we merge p and q and the proof can easily be extended to the general case by induction.

All partitions of the reduced graph fulfill all must-link constraints and thus any relaxation of the unconstrained normalized cut problem can now be used. Moreover, this is not restricted to the cut criterion we are using but any other graph cut criterion based on cut and the volume of the subsets will be preserved in the reduction.

It is shown in [9] that Algorithm 1 generates a sequence fk such that either Fγ(fk+1)<Fγ(fk) or the sequence terminates. Moreover, the cluster points of fk correspond to critical points of Fγ. The scheme is given in Algorithm 1 for the problem minf∈Rn(R1(f)−R2(f))/S(f), where

In the algorithm the key part is the inner convex problem which one has to solve at each step. In our case it has the form,

To solve it more efficiently we derive an equivalent smooth dual formulation for this non-smooth convex problem. We replace wij+γqmij by w′ij in the following.

Noting that 12∑ni,j=1w′ij∣∣fi−fj∣∣=max{α∈RE|∥α∥∞≤1,αij=−αji}⟨f,Aα⟩ (see [8]) and maxifi=maxu∈U⟨u,f⟩, the inner problem can be rewritten as

The step s1 follows from the standard min-max theorem (see Corollary 37.3.2 in [13]) since u, v, α and f lie in non-empty compact convex sets. In the step s2, we used that the minimizer of the linear function over the Euclidean ball is given by

if ∥∥Aα−γr−λks+cu−cv∥∥2≠0; otherwise f∗ is an arbitrary element of the Euclidean unit ball.

Finally, we have ∥∥Aα−r−λks+cu−cv∥∥ = c ∥∥Aαc+u−v−b∥∥. We also know that for a convex set C and any given y, minx∈C∥x−y∥=∥y−PC(y)∥, where PC(y) is the projection of y onto the set C. With y=−Aαc+v+b, we have for any α, minu,v∈UΨ(α,u,v)=minv∈Uminu∈Uc∥u−y∥=minv∈Uc∥y−PU(y)∥ and from this the result follows. ∎

Let B be a linear operator defined as (Bβ)i:=∑j:(i,j)∈Eβij and let sij=w′ijcM, for positive constant M≥∥B∥. The above inner problem is equivalent to

where d=−BMβ+v+b. The Lipschitz constant of the gradient of ~Ψ is upper bounded by 4.

Let βij=sijαij. Then (Aαc)i=∑j:(i,j)∈Ew′ijαijc=∑j:(i,j)∈EβijM=(BMβ)i and constraints on α transform to −sij≤βij≤sij and βij=−βij. Since the mapping between α and β is one-to-one, the transformation yields an equivalent problem (in the sense that minimizer of one problem can be easily derived from minimizer of the other problem).

Now we derive a bound on the Lipschitz constant.

where BT is the adjoint operator of B given by (BTd)ij=(di−dj).