In this paper, we consider enumeration problems for edge-distinct and vertex-distinct Eulerian trails. Here, two Eulerian trails are edge-distinct if the edge sequences are not identical, and they are vertex-distinct if the vertex sequences are not identical. As the main result, we propose optimal enumeration algorithms for both problems, that is, these algorithm runs in 𝒪(N) total time, where N is the number of solutions. Our algorithms are based on the reverse search technique introduced by [Avis and Fukuda, DAM 1996], and the push out amortization technique introduced by [Uno, WADS 2015]. 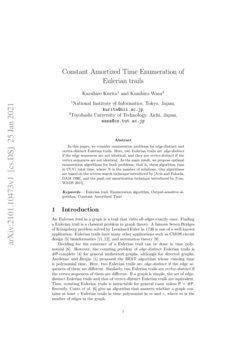 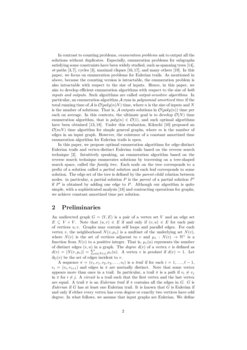 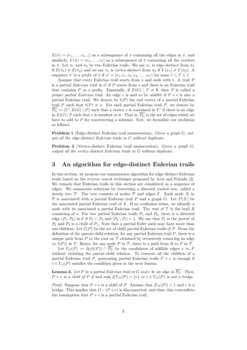 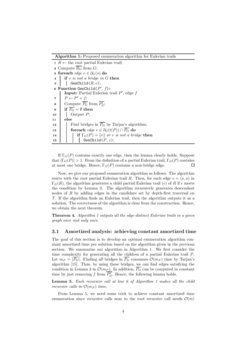 An Eulerian trail in a graph is a trail that visits all edges exactly once. Finding a Eulerian trail is a classical problem in graph theory. A famous Seven Bridges of Königsberg problem solved by Leonhard Euler in 1736 is one of a well-known application. Eulerian trails have many other applications such as CMOS circuit design [5] bioinformatics [11, 12], and automaton theory [9].

In this paper, we propose optimal enumeration algorithms for edge-distinct Eulerian trails and vertex-distinct Eulerian trails based on the reverse search technique [2]. Intuitively speaking, an enumeration algorithm based on the reverse search technique enumerates solutions by traversing on a tree-shaped search space, called the family tree. Each node on the tree corresponds to a prefix of a solution called a partial solution and each leaf corresponds to some solution. The edge set of the tree is defined by the parent-child relation between nodes. in particular, a partial solution P is the parent of a partial solution P′ if P′ is obtained by adding one edge to P. Although our algorithm is quite simple, with a sophisticated analysis [18] and contracting operations for graphs, we achieve constant amortized time per solution.

An undirected graph G=(V,E) is a pair of a vertex set V and an edge set E⊆V×V. Note that (u,v)∈E if and only if (v,u)∈E for each pair of vertices u,v. Graphs may contain self loops and parallel edges. For each vertex v, the neighborhood N(v,μv) is a multiset of the underlying set N(v), where N(v) is the set of vertices adjacent to v and μv:N(v)→N+ is a function from N(v) to a positive integer. That is, μv(u) represents the number of distinct edges (v,u) in a graph. The degree d(v) of a vertex v is defined as d(v)=|N(v,μv)|=∑u∈N(v)μv(u). A vertex v is pendant if d(v)=1. Let ∂G(v) be the set of edges incident to v.

A sequence π=(v1,e1,v2,e2,…,vℓ) is a trail if for each i=1,…,ℓ−1, ei=(vi,vi+1) and edges in π are mutually distinct. Note that some vertex appears more than once in a trail. In particular, a trail π is a path if vi≠vj in π for i≠j. A circuit is a trail such that the first vertex and the last vertex are equal. A trail π is an Eulerian trail if π contains all the edges in G. G is Eulerian if G has at least one Eulerian trail. It is known that G

is Eulerian if and only if either every vertex has even degree or exactly two vertices have odd degree. In what follows, we assume that input graphs are Eulerian. We define

Given a graph G, output all the edge-distinct Eulerian trails in G without duplicate.

Given a graph G, output all the vertex-distinct Eulerian trails in G without duplicate.

3 An algorithm for edge-distinct Eulerian trails

Let ΓG(P)\coloneqq∂G(t(P))∩¯¯¯¯¯¯¯PG be the candidates of addible edges e to P without violating the parent-child relation. To traverse all the children of a partial Eulerian trail P, generating partial Eulerian trails P+e is enough if e∈ΓG(P) satisfies the condition given in the next lemma.

Suppose that P+e is a child of P. Assume that |ΓG(P)|>1 and e is a bridge. This implies that G−(P+e) is disconnected, and thus, this contradicts the assumption that P+e is a partial Eulerian trail.

Algorithm 1 outputs all the edge-distinct Eulerian trails in a given graph once and only once.

The goal of this section is to develop an optimal enumeration algorithm constant amortized time per solution based on the algorithm given in the previous section. We summarize our algorithm in Algorithm 1. We first consider the time complexity for generating all the children of a partial Eulerian trail P. Let mP=|¯¯¯¯¯¯¯PG|. Finding all bridges in ¯¯¯¯¯¯¯PG consumes O(mP) time by Tarjan’s algorithm [15]. Thus, by using these bridges, we can find edges satisfying the condition in Lemma 3 in O(mP). In addition, ¯¯¯¯¯¯¯PG can be computed in constant time by just removing f from ¯¯¯¯¯¯¯P′G. Hence, the following lemma holds.

From Lemma 5, we need some trick to achieve constant amortized time enumeration since recursive calls near to the root recursive call needs O(m) time. In this paper, we employ the push out amortization technique as the trick introduced by Uno [18].

We first introduce some terminology. Let P be a partial Eulerian trail. The phrase “the algorithm generates P” indicates that the algorithm computes P and ¯¯¯¯¯¯¯PG at Algorithm 1 and Algorithm 1 of Algorithm 1, respectively. We denote by T(P) of P the exact number of computational steps for generating P. That is, T(P) does not include the time complexity of descendants of P. Let ¯¯¯¯T(P) be the sum of the computation time of generating children of P.

Let P be a partial Eulerian trail. We call the following equation the push out condition for our problem: For some two constants α>1 and β≥0,

If v is a pendant, then remove v.

Let G be a graph, P be a partial Eulerian trail in G such that there is the parent P′ satisfying P=P′+(u,v). Assume that the contracted graph of ¯¯¯¯¯¯¯P′G is already obtained. Then, the contraction of ¯¯¯¯¯¯¯PG can be done in constant time.

Each vertex in a contracted graph is incident to at least two non-bridge edges.

Let G be a contracted graph such that G has an Eulerian trail. Because of Contraction Rule 1 and Contraction Rule 2, all vertices are incident to at least three edges. Suppose that a vertex v incident to two distinct bridges b1 and b2. Otherwise, the lemma holds. Let Bi be a connected component of G−v such that bi∈Bi for i=1,2. Then, there are two classes of Eulerian trails the one contains paths first visit B1 and next visit B2, and the other first visits B2 and next B1. Because G is Eulerian, v must be incident to at least two edges for visiting all the edges in G∖(B1∪B2). Hence, the statement holds. ∎

Because detecting bridges can be done in O(mP) time [15], the time complexity of each iteration is O(mP). In addition, the difference between the number of edges in ¯¯¯¯¯¯¯PG and that in ¯¯¯¯¯¯¯¯QG of a child Q of P is constant, and each proper partial Eulerian trail has at least two children by Lemma 8. Hence, the proposed algorithm satisfies the push out condition and runs in constant amortized time per solution without outputting.

Next, we consider the output format of our algorithm. If we simply output all the solutions naïvely, then total time complexity is O(mN). Hence, to achieve constant amortized time enumeration, we modify our algorithm so that it only outputs the difference between two consecutive solutions. Outputting only the difference is a well known technique for reducing the total time complexity in enumeration field [16, 14]

Lemmas 8 and 3 imply that each partial Eulerian trail has either zero or at least two children. This yields the following corollary.

The number of partial Eulerian trails generated by the algorithm is O(N).

Remind that partial Eulerian trails corresponds to nodes on T. Thus, by Corollary 9, the total length of outputs is O(N) and the next theorem holds.

One can enumerate all the Eulerian trails in a graph in constant amortized time per solution with linear space and preprocess time in the size of the graph.

In this section, we focus on an enumeration of vertex-distinct Eulerian trails. In a way similar to the previous section, we develop an enumeration algorithm based on the reverse search technique. We first some terminologies. A pair (u,v) of vertices is good if there are two parallel edges e1 and e2 between u and v such that the corresponding trail of e1 in the original graph differs from that of e2. Otherwise, we say (u,v) is bad. Note that we can check whether (u,v) is good or bad in constant time.

The main difference from the edge-distinct problem is that adding parallel edges between a bad pair to a current partial Eulerian trail may generate duplicate solutions. Note that two parallel edges between a good pair may yield two children if these parallel edges is generated by Contraction Rule 2. This is because an added edge by Contraction Rule 2 carries two or more edges. To ensure that each proper partial Eulerian trail has at least two children, that is, each vertex v has at least two distinct edges, we slightly modify an input graph of each recursive call as follows.

This rule comes from the following observation: each solution in G contains either (1) two (u,v,w) or (2) (u,v,u) and (w,v,w). Note that if v is a cut, then all the solutions contain the former subtrails. Moreover, the set of solutions in G1 and G2 are disjoint. Hence, if there is such a vertex v, then the algorithm replace a child Q of P with two children Q1 and Q2 whose associated graphs are G1 and G2, respectively.

Let G be a contracted graph and P be a partial Eulerian trail in G. Suppose that ¯¯¯¯¯¯¯P′G of the parent P′ of P is already obtained. Then, contracting ¯¯¯¯¯¯¯PG can be done in constant time.

Case A: v has at least three distinct neighbors u,w1,w2

We can not apply any rules to w1 and w2 after adding e to P′.

This case is the same as case A.2 after adding e to P′.

In this case, Contraction Rule 3 can be applied to v on ¯¯¯¯¯¯¯P′G. Because ¯¯¯¯¯¯¯P′G is contracted, this derives a contradiction. Thus, this case does not happen.

We also have the same cases for u. Thus, from the above observation, the number of applying contracting rules is constant. Moreover, each rule can be proceeded in constant time. Therefore, the lemma holds. ∎

Let G be a graph and P be a partial Eulerian trail in G. Suppose that ¯¯¯¯¯¯¯PG is contracted. Then, children of P that are generated by applying Multibirth Rule to ¯¯¯¯¯¯¯PG can be obtained in constant time.

From the above discussion, we can obtain the following key lemma.

A proper partial Eulerian trail P of a contracted graph G has at least two children.

By Lemmas 12, 13 and 11, each non-leaf node P on the family tree made by the algorithm has at least two children and can be done in O(mP) time, where mP is the number of edges in the contracted graph ¯¯¯¯¯¯¯PG. Remind that the computation time is dominated by detecting bridges on ¯¯¯¯¯¯¯PG. Thus, by the same discussion in the previous section, the main theorem in this section is established.

All vertex-distinct Eulerian trails can be enumerated in constant amortized time per solution with linear time preprocessing and linear space.