Generative Adversarial Networks (GANs) are known to be difficult to train, despite considerable research effort. Several regularization techniques for stabilizing training have been proposed, but they introduce non-trivial computational overheads and interact poorly with existing techniques like spectral normalization. In this work, we propose a simple, effective training stabilizer based on the notion of consistency regularization—a popular technique in the semi-supervised learning literature. In particular, we augment data passing into the GAN discriminator and penalize the sensitivity of the discriminator to these augmentations. We conduct a series of experiments to demonstrate that consistency regularization works effectively with spectral normalization and various GAN architectures, loss functions and optimizer settings. Our method achieves the best FID scores for unconditional image generation compared to other regularization methods on CIFAR-10 and CelebA. Moreover, Our consistency regularized GAN (CR-GAN) improves state-of-the-art FID scores for conditional generation from 14.73 to 11.67 on CIFAR-10 and from 8.73 to 6.66 on ImageNet-2012. 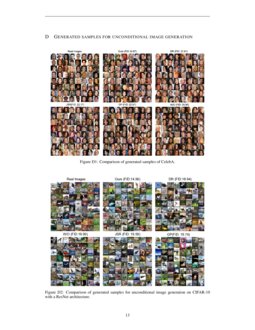 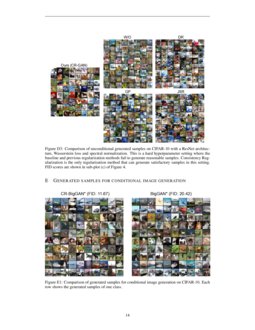 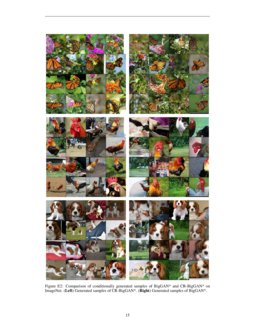 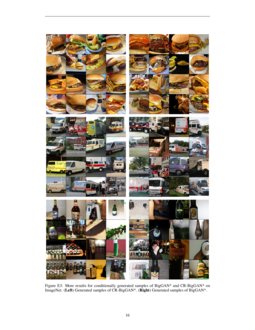 . In the original setting, GANs are composed of two neural networks trained with competing goals: the

Gulrajani et al. (2017) penalize the gradient norm of straight lines between real data and generated data. Roth et al. (2017) propose to directly regularize the squared gradient norm for both the training data and the generated data. DRAGAN (Kodali et al., 2017) introduces another form of gradient penalty where the gradients at Gaussian perturbations of training data are penalized. One may anticipate simultaneous regularization and normalization could improve sample quality. However, most of these gradient based regularization methods either provide marginal gains or fail to introduce any improvement when normalization is used (Kurach et al., 2019), which is also observed in our experiments. These regularization methods and spectral normalization are motivated by controlling Lipschitz constant of the discriminator. We suspect this might be the reason that applying both does not lead to overlaid gain.

This technique is simple to use and surprisingly effective. It is as well less computationally expensive than prior techniques. More importantly, in our experiments, consistency regularization can always further improve the model performance when spectral normalization is used, whereas the performance gains of previous regularization methods diminish in such case. In extensive ablation studies, we show that it works across a large range of GAN variants and datasets. We also show that simply applying this technique on top of existing GAN models leads to new state-of-the-art results as measured by Frechet Inception Distance (Heusel et al., 2017).

In summary, our contributions are summarized as follows:

is usually a standard normal distribution. This formulation is originally proposed by

Goodfellow et al. (2014) as non-saturating (NS) GAN. A significant amount of research has been done on modifying this formulation in order to improve the training process. A notable example is the hinge-loss version of the adversarial loss (Lim and Ye, 2017; Tran et al., 2017):

Another commonly adopted GAN formulation is the Wassertein GAN (WGAN) (Arjovsky et al., 2017), in which the authors propose clipping the weights of the discriminator in an attempt to enforce that the GAN training procedure implicitly optimizes a bound on the Wassertein distance between the target distribution and the distribution given by the generator. The loss function of WGAN can be written as

between the distribution over classes implied by the output logits.

to denote the output vector before activation of the

jth layer of the discriminator given input x. T(x) denotes a stochastic data augmentation function. This function can be linear or nonlinear, but aims to preserve the semantics of the input. Our proposed regularization is given by

where j indexes the layers, m is the starting layer and n is the ending layer that consistency is enforced. λj is weight coefficient for jth layer and ∥⋅∥ denotes L2 norm of a given vector. This consistency regularization encourages the discriminator to produce the same output for a data point under various data augmentations.

In our experiments, we find that consistency regularization on the last layer of the discriminator before the activation function is sufficient.

Lcr can be rewritten as

where from now on we will drop the layer index for brevity. This cost is added to the discriminator loss (weighted by a hyper-parameter λ) when updating the discriminator parameters. The generator update remains unchanged. Thus, the overall consistency regularized GAN (CR-GAN) objective is written as

Our design of Lcr is general-purpose and thereby can work with any valid adversarial losses LG and LD for GANs (See Section 2.1 for examples). Algorithm 1 illustrates the details of CR-GAN with Wassertein loss as an example. In contrast to previous regularizers, our method does not increase much overhead. The only extra computational cost comes from feeding an additional (third) image through the discriminator forward and backward when updating the discriminator parameters.

and demonstrate performance improvement. Finally, we conduct ablation studies to investigate the importance of various design choices and hyper-parameters. All our experiments are based on the open-source code from Compare GAN

We adopt the Fréchet Inception distance (FID) (Heusel et al., 2017) as primitive metric for quantitative evaluation, as FID has proved be more consistent with human evaluation. In our experiments the FID is calculated on the test dataset. In particular, we use 10K generated images vs. 10K test images on CIFAR-10, 3K vs. 3K on CelebA and 50K vs. 50K on ImageNet. We also provide the Inception Score (Salimans et al., 2016) for different methods in the Appendix F for supplementary results. By default, the augmentation used in consistency regularization is a combination of randomly shifting the image by a few pixels and randomly flipping the image horizontally. The shift size is 4 pixels for CIFAR-10 and CelebA and 16 for ImageNet.

3.2 Comparison with other GAN regularization methods

Following the procedures from (Kurach et al., 2019; Lucic et al., 2018), we evaluate these methods across different optimizer parameters, loss functions, regularization coefficient and neural architectures. For optimization, we use the Adam optimizer with batch size of 64 for all our experiments. We stop training after 200k generator update steps for CIFAR-10 and 100k steps for CelebA. By default, spectral normalization (SN) (Miyato et al., 2018a) is used in the discriminator, as this is the most effective normalization method for GANs (Kurach et al., 2019) and is becoming the standard for ‘modern’ GANs (Zhang et al., 2019; Brock et al., 2018). Results without spectral normalization can be seen in the Appendix B.

In this section, we discuss how each regularization method performs when the loss function is changed. Specifically, we evaluate regularization methods using three loss functions: the non-saturating loss (NS) (Goodfellow et al., 2014), the Wasserstein loss (WAS) (Arjovsky et al., 2017), and the hinge loss (Hinge) (Lim and Ye, 2017; Tran et al., 2017). For each loss function, we evaluate over 7 hyper-parameter settings of the Adam optimizer (more details in Section A of the appendix). For each configuration, we run each model 3 times with different random seeds. For the regularization coefficient, we use the best value reported in the corresponding paper. Specifically λ is set to be 10 for both GP, DR and our method and 0.1 for JSR. In this experiment, we use the SNDCGAN network architecture (Miyato et al., 2018a) for simplicity. In the end, similar as Kurach et al. (2019), we aggregate all runs and report the FID distribution of the top 15% of trained models.

The results are shown in Figure 2. The consistency regularization improves the baseline across all different loss functions and both datasets. Other techniques have more mixed results: For example, GP and DR can marginally improve the performance for settings (d) and (e) but lead to worse results for settings (a) and (b) (which is consistent with findings from Kurach et al. (2019)). In all cases, our consistency-regularized GAN models have the lowest (best) FID.

3.2.2 Impact of the regularization coefficient

To validate whether the above findings hold across different neural architectures, we conduct experiments on CIFAR-10 using a ResNet (He et al., 2016; Gulrajani et al., 2017) architecture instead of an SNDCGAN. All other experimental settings are same as in Section 3.2.1. The FID values are presented in Figure 4. By comparing results in Figure 4 and Figure 2, we can see that results on SNDCGAN and results on ResNet are comparable, though consistency regularization fares even better in this case: In sub-plot (c) of Figure 4, we can see that consistency regularization is the only regularization method that can generate satisfactory samples with a reasonable FID score (The FID scores for other methods are above 100). Please see Figure D3 for the actual generated samples in this setting. As in Section 3.2.1, consistency regularization has the best FID for each setting.

In Table 1, we show FID scores for the best-case settings from this section. Consistency regularization improves on the baseline by a large margin and achieves the best results across different network architectures and datasets. In particular, it achieves an FID 14.56 on CIFAR-10 16.97 on CelebA. In fact, our FID score of 14.56 on CIFAR-10 for unconditional image generation is even lower than the 14.73 reported in Brock et al. (2018) for class-conditional image-synthesis with a much larger network architecture and much bigger batch size.

Generated samples for CIFAR-10 and ImageNet with consistency regularized models and baseline models are shown in Figures E1, E2 and E3 in the appendix.

4.1 How Much Does Augmentation Matter by Itself?

Our consistency regularization technique actually has two parts: we perform data augmentation on inputs from the training data, and then consistency is enforced between the augmented data and the original data. We are interested in whether the performance gains shown in Section 3 are merely due to data augmentation, since data augmentation reduces the over-fitting of the discriminator to the input data. Therefore, we have designed an experiment to answer this question.

4.2 How does the Type of Augmentation Affect Results?

It’s also noteworthy that the most extensive augmentation (random flipping and shifting with cutout) did not perform the best - this suggests that it can be useful to start with simple augmentations and gradually increase their complexity until results plateau. Notably, random flipping and shifting has been adopted as the de-facto standard data augmentation policy on the CIFAR-10 dataset (Zagoruyko and Komodakis, 2016), which is consistent with our results.

We thank Colin Raffel for feedback on drafts of this article. We also thank Marvin Ritter, Michael Tschannen and Mario Lucic for answering our questions of using compare GAN codebase for large scale GAN evaluation.

Appendix A Hyperparameter settings of optimizer

Here, similar as the experiments in Miyato et al. (2018a); Kurach et al. (2019), we evaluate all regularization methods across 7 different hyperparameters settings for (1) learning rate lr (2) first and second order momentum parameters of Adam β1, β2 (3) number of the updates of the discriminator per generator update, Ndis. The details of all the settings are shown in Table A1. Among all these 7 settings, A-D are the "good" hyperparameters used in previous publications (Radford et al., 2016; Gulrajani et al., 2017; Kurach et al., 2019); E, F, G are the "aggressive" hyperparameter settings introduced by Miyato et al. (2018a) to test model performance under noticeably large learning rate or disruptively high momentum. In practice, we find setting 3 generally works the best for SNDCGAN and setting 4 is the optimal setting for ResNet. These two settings are also the default settings in the Compare GAN codebase for the corresponding network architectures.

Here we show the actual training speed of discriminator updates for SNDCGAN on CIFAR-10 with NVIDIA Tesla V100. Consistency regularization is around 1.7 times faster than gradient based regularization techniques.

Inception Score (IS) is another GAN evaluation metric introduced by

Salimans et al. (2016). Here, we compare the Inception Score of the unconditional generated samples on CIFAR-10. As shown in Table F1, Figure F1 and Figure F2, consistency regularization achieves the best IS result with both SNDCGAN and ResNet architectures.