For integrable functions we provide a weak law of large numbers for structured Monte Carlo methods, such as estimators based on randomized digital nets, Latin hypercube sampling, randomized Frolov point sets as well as Cranley-Patterson rotations. Moreover, we suggest median modified methods and show that for integrands in L^p with p>1 a strong law of large numbers holds. 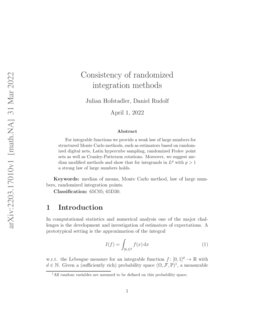 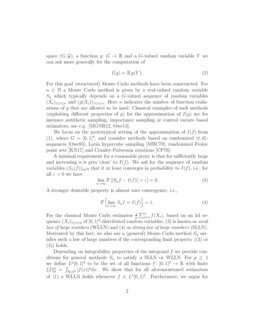 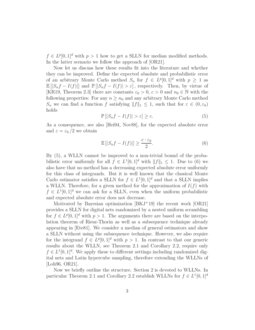 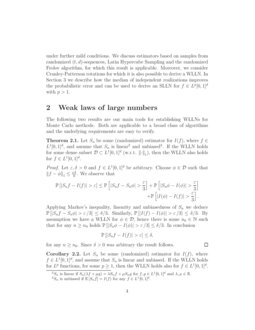 A strong law of large numbers for scrambled net integration

This article provides a strong law of large numbers for integration on d...
Art B. Owen, et al. ∙

The Marcinkiewicz-Zygmund law of large numbers for exchangeable arrays

In this article we revisit the problem of numerical integration for mono...
Subhasish Basak, et al. ∙

A Tool for Custom Construction of QMC and RQMC Point Sets

On the distribution of scrambled (0,m,s)-nets over unanchored boxes

In computational statistics and numerical analysis one of the major challenges is the development and investigation of estimators of expectations. A prototypical setting is the approximation of the integral

w.r.t. the Lebesgue measure for an integrable function f:[0,1]d→R with d∈N

. Given a (sufficiently rich) probability space

(Ω,F,P)111All random variables are assumed to be defined on this probability space., a measurable space (G,G), a function g:G→R and a G

Y we can ask more generally for the computation of

For this goal (structured) Monte Carlo methods have been constructed. For n∈N a Monte Carlo method is given by a real-valued random variable Sn which typically depends on a G-valued sequence of random variables (Xi)1≤i≤n and (g(Xi))1≤i≤n. Here n indicates the number of function evaluations of g that are allowed to be used. Classical examples of such methods (exploiting different properties of g) for the approximation of I(g) are for instance antithetic sampling, importance sampling or control variate based estimators, see e.g. [MGNR12, Owe13].

We focus on the prototypical setting of the approximation of I(f) from (1), where G=[0,1]d, and consider methods based on randomized (t,d)-sequences [Owe95], Latin hypercube sampling [MBC79], randomized Frolov point sets [KN17] and Cranley-Patterson rotations [CP76].

A minimal requirement for a reasonable proxy is that for sufficiently large and increasing n it gets ‘close’ to I(f). We ask for the sequence of random variables (Sn(f))n∈N that it at least converges in probability to I(f), i.e., for all ε>0 we have

A stronger desirable property is almost sure convergence, i.e.,

Depending on integrability properties of the integrand f we provide conditions for general methods Sn to satisfy a SLLN or WLLN. For p≥1 we define Lp[0,1]d to be the set of all functions f:[0,1]d→R with finite ∥f∥pp=∫[0,1]d|f(x)|pdx. We show that for all aforementioned estimators of (1) a WLLN holds whenever f∈L1[0,1]d. Furthermore, we argue for f∈Lp[0,1]d with p>1 how to get a SLLN for median modified methods. In the latter scenario we follow the approach of [OR21].

Now let us discuss how these results fit into the literature and whether they can be improved. Define the expected absolute and probabilistic error of an arbitrary Monte Carlo method Sn for f∈Lp[0,1]d with p≥1 as E[|Snf−I(f)|] and P[|Snf−I(f)|>ε], respectively. Then, by virtue of [KR19, Theorem 2.3] there are constants ε0>0, c>0 and n0∈N with the following properties: For any n≥n0 and any arbitrary Monte Carlo method Sn we can find a function f satisfying ∥f∥1≤1, such that for ε∈(0,ε0) holds

As a consequence, see also [Hei94, Nov88], for the expected absolute error and ε=ε0/2 we obtain

By (5), a WLLN cannot be improved to a non-trivial bound of the probabilistic error uniformly for all f∈L1[0,1]d with ∥f∥1≤1. Due to (6) we also have that no method has a decreasing expected absolute error uniformly for this class of integrands. But it is well known that the classical Monte Carlo estimator satisfies a SLLN for f∈L1[0,1]d and that a SLLN implies a WLLN. Therefore, for a given method for the approximation of I(f) with f∈L1[0,1]d we can ask for a SLLN, even when the uniform probabilistic and expected absolute error does not decrease.

Motivated by Bayesian optimization [BKJ+19] the recent work [OR21] provides a SLLN for digital nets randomized by a nested uniform scrambling for f∈Lp[0,1]d with p>1

. The arguments there are based on the interpolation theorem of Riesz-Thorin as well as a subsequence technique already appearing in

[Ete81]. We consider a median of general estimators and show a SLLN without using the subsequence technique. However, we also require for the integrand f∈Lp[0,1]d with p>1. In contrast to that our generic results about the WLLN, see Theorem 2.1 and Corollary 2.2, require only f∈L1[0,1]d. We apply these to different settings including randomized digital nets and Latin hypercube sampling, therefore extending the WLLNs of [Loh96, OR21].

Now we briefly outline the structure. Section 2 is devoted to WLLNs. In particular Theorem 2.1 and Corollary 2.2 establish WLLNs for f∈L1[0,1]d under further mild conditions. We discuss estimators based on samples from randomized (t,d)-sequences, Latin Hypercube Sampling and the randomized Frolov algorithm, for which this result is applicable. Moreover, we consider Cranley-Patterson rotations for which it is also possible to derive a WLLN. In Section 3 we describe how the median of independent realizations improves the probabilistic error and can be used to derive an SLLN for f∈Lp[0,1]d with p>1.

The following two results are our main tools for establishing WLLNs for Monte Carlo methods. Both are applicable to a broad class of algorithms and the underlying requirements are easy to verify.

for any n≥n0. Since δ>0 was arbitrary the result follows. ∎

By assumption we have a WLLN for Lp functions, and consequently for C∞c. Thus the result follows by an application of Theorem 2.1. ∎

In the proofs of Theorem 2.1 and Corollary 2.2 we restricted ourselves to G=[0,1]d, however, this assumption can be relaxed to obtain WLLNs for estimating I(g) as in (2). Furthermore, we did not require that the amount of function evaluations allowed to use by Sn is (exactly) n.

We now turn to examples. First, we consider an estimator of the form

We consider randomized (t,d)-sequences as in [Owe95]. The underlying deterministic points are (t,d)-sequences, which also prove to be useful for numerical integration (cf. [DP10]), and randomization is done, roughly speaking, by randomly permuting digits. One obtains a sequence of random points, denoted by (Xn)n∈N, which consists of uniformly distributed points and satisfies crucial properties of a (t,d)-sequence with probability one, see [Owe95]. Setting Pn={X1,…,Xn} and defining Sn as specified in (7

) we indeed have a linear and unbiased estimator.

Using those points for Pn within Sn of (7) yields a linear and unbiased estimator. In [Loh96] a SLLN for L2 functions is established, which implies a WLLN for f∈L2[0,1]d. Making use of Corollary 2.2 the WLLN generalizes to f∈L1[0,1]d. We remark that consistency of Latin Hypercube Sampling was already observed in [AHT12, PS08], however, a proof is not given there and seems tricky to find in the literature.

Employing [DP10, Proposition 2.18], which is a version of the Koksma-Hlawka inequality, and then [Owe13, Inequality (17.9)] it follows that for ϕ∈C∞c with probability one

Here c1,c2 are finite constants depending on ϕ,d only. Moreover, C∞c is as in the proof of Corollary 2.2 and D(⋅) denotes the discrepancy (of a point set), see for instance the book [DP10] for details.

Under rather mild conditions, regarding the construction of a Hammersley point set or a lattice point set or a (t,d)-sequence the discrepancy for any of these point sets decreases to zero. However, it might be necessary to switch to a subsequence, cf. [DP10].

We add an example where Sn does not take the form of (7).

Randomized Frolov points, as studied in [KN17] and later in [Ull17], rely on a random shift and dilatation of (deterministic) Frolov points (cf. [Ull16] for an introductory paper), which itself provide a powerful tool for numerical integration in Sobolev spaces, see [UU16] for a survey.

For technical reasons we extend any f:[0,1]d→R to a function defined on Rd by setting it zero outside the unit cube. Hence for the integral of interest holds I(f)=∫[0,1]df(x)dx=∫Rdf(x)dx.

Here for any n∈N the estimator Sn is given by

is a suitable random matrix and

Pn is the set of corresponding randomized Frolov points, which in particular depend on An. We emphasize that

where card(Pn) denotes the cardinality of Pn. For details we refer to [Ull17, Section 2.1]. Obviously one has a linear estimator and [KN17, Lemma 3] guarantees that Sn is also unbiased.

In this section we derive SLLNs for f∈Lp[0,1]d by using median modified methods and combining techniques which were also used in [KR19], [OR21] and [KNR19]. Let Sn be any linear and unbiased Monte Carlo method, k∈N

an odd number and

In [KR19] Lemma 3.1 is proven in the case where Sn uses exactly n function evaluations. However, reviewing the proof of [NP09, Proposition 2.1] it follows that this condition can be relaxed and that Lemma 3.1 is also applicable in more general situations, e.g., for randomized Frolov points as in Example 2.7.

To deduce error bounds for 1<p<2 we make use of the following result, which is a version of the Riesz-Thorin interpolation theorem, see [Gra14, Theorem 1.3.4].

Throughout this section we assume that Sn

where ε>0 is arbitrary. If additionally k>2/(p−1) it follows immediately from the lemma of Borel-Cantelli that a SLLN holds.

Note that without using the median of several independent copies of Sn it is still possible to find SLLNs by considering Snj for a suitably chosen (sub)sequence (nj)j∈N. By the lemma of Borel-Cantelli and (10) a sufficient condition is ∑∞j=1n1−pj<∞.

We again consider Sn with Pn based on Latin Hypercube Sampling as in Example 2.5. In this example the desired estimate of (9) is established, for example, in [Owe13, Corollary 17.3]. Thus, the median Sn,k for k>2/(p−1) odd or a suitable subsequence of Sn, for instance as suggested in Remark 3.5, satisfies a SLLN for f∈Lp[0,1]d.

We continue with Sn from Example 2.7 based on randomized Frolov points. By (8) we deduce a variance estimate as required in (9), resulting in a SLLN for f∈Lp[0,1]d, for the median Sn,k of k>2/(p−1) independent copies (k odd), or for Sn by passing to a suitable subsequence (see Remark 3.5).

The techniques used in this section can be adapted to the case where instead of (9) one has an estimate for the q mean error E[|Snf−I(f)|q], for some q>1.