This paper proposes a deep neural network (DNN)-based multi-channel speech enhancement system in which a DNN is trained to maximize the quality of the enhanced time-domain signal. DNN-based multi-channel speech enhancement is often conducted in the time-frequency (T-F) domain because spatial filtering can be efficiently implemented in the T-F domain. In such a case, ordinary objective functions are computed on the estimated T-F mask or spectrogram. However, the estimated spectrogram is often inconsistent, and its amplitude and phase may change when the spectrogram is converted back to the time-domain. That is, the objective function does not evaluate the enhanced time-domain signal properly. To address this problem, we propose to use an objective function defined on the reconstructed time-domain signal. Specifically, speech enhancement is conducted by multi-channel Wiener filtering in the T-F domain, and its result is converted back to the time-domain. We propose two objective functions computed on the reconstructed signal where the first one is defined in the time-domain, and the other one is defined in the T-F domain. Our experiment demonstrates the effectiveness of the proposed system comparing to T-F masking and mask-based beamforming. 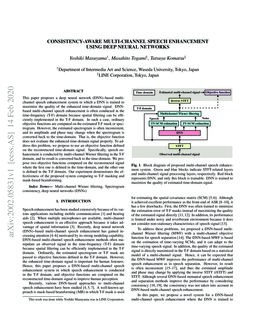 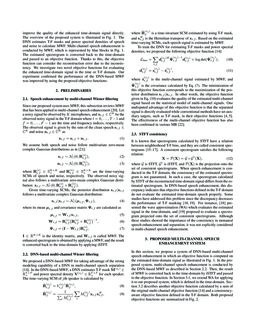 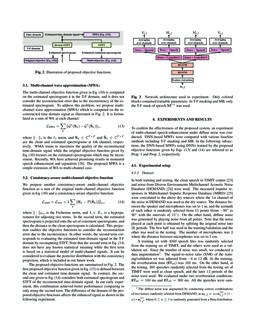 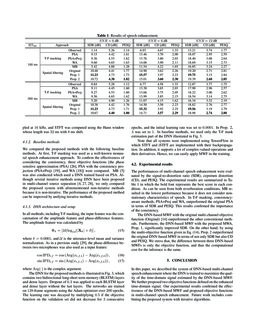 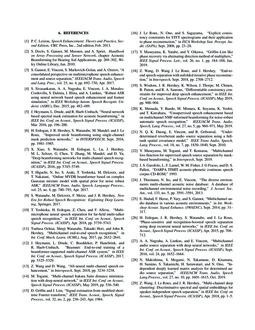 Towards Low-distortion Multi-channel Speech Enhancement: The ESPNet-SE Submission to The L3DAS22 Challenge

Recently, various DNN-based approaches to multi-channel speech enhancement have been studied [4, 5, 7]. A well-known approach is mask-based beamforming (MB) in which T-F mask is used for estimating the spatial covariance matrix (SCM) [5, 6]. Although it achieved excellent performance as the front-end of ASR [8, 9, 10], it has a few drawbacks. First, the DNN was often trained to minimize the estimation error of T-F masks instead of maximizing the quality of the estimated signal directly [11, 12]. In addition, its performance is limited under noisy and reverberant environment because it does not consider non-stationary characteristics of speech signal [13].

In this paper, we propose a novel system for a DNN-based multi-channel speech enhancement where the DNN is trained to improve the quality of the enhanced time-domain signal directly. The overview of the proposed system is illustrated in Fig. 1. The DNN estimates T-F masks and power spectral densities of speech and noise to calculate MWF. Multi-channel speech enhancement is conducted by MWF, which is represented by blue blocks in Fig. 1. The estimated spectrogram is converted back to the time-domain and passed to an objective function. Thanks to this, the objective function can consider the reconstruction error due to the inconsistency. We investigate two novel objective functions for evaluating the enhanced time-domain signal in the time or T-F domain. Our experiment confirmed the performance of the DNN-based MWF was improved by using the proposed objective functions.

Since our proposed system uses MWF, this subsection reviews MWF that has been applied to multi-channel speech enhancement [20]. Let a noisy signal be observed by K microphones, and xt,f∈CK be the observed noisy signal in the T-F domain where t=0,…,T−1 and f=0,…,F−1 are the time and frequency indices, respectively. The observed signal is given by the sum of the clean speech st,f∈CK and noise nt,f∈CK as

where R(s)t,f∈SK×K+ and R(n)t,f∈SK×K+ are the time-varying SCMs of speech and noise, respectively. The observed noisy signal also follows a multivariate zero-mean complex Gaussian distribution: xt,f∼NC(0,R(s)t,f+R(n)t,f).

where its mean μt,f and covariance matrix Ψt,f are calculated as

Wt,f is called MWF. The enhanced spectrogram is obtained by applying a MWF, and the result is converted back to the time-domain by applying iSTFT.

We proposed a DNN-based MWF for taking advantage of the strong modeling capability of a DNN in multi-channel speech separation [14]. In the DNN-based MWF, a DNN estimates T-F mask M(sj)∈RT×F+ and power spectral density V(sj)∈RT×F+ for each speaker. The time-varying SCM of jth speaker is calculated by

where ~R(sj)f is a time-invariant SCM estimated by using T-F mask, and xHt,f is the Hermitian transpose of xt,f. Based on the estimated time-varying SCMs, each speech signal is estimated by MWF.

To train the DNN for estimating T-F masks and power spectral densities, we proposed the following objective function [14]:

The multi-channel objective function given in Eq. (10) is computed on the estimated spectrogram ^s in the T-F domain, and it does not consider the reconstruction error due to the inconsistency of the estimated spectrogram. To address this problem, we propose multi-channel wave approximation (MWA) which is computed on the reconstructed time domain signal as illustrated in Fig. 2. It is formulated as a sum of WA at each channel:

where ∥⋅∥1 is the ℓ1 norm, and Sk∈CT×F and ^Sk∈CT×F are the clean and estimated spectrograms at kth channel, respectively. WMA trains to maximize the quality of the reconstructed time-domain signal while the original objective function given by Eq. (10) focuses on the estimated spectrogram which may be inconsistent. Recently, WA have achieved promising results in monaural speech enhancement and separation [18]. The proposed MWA is a simple extension of WA to multi-channel case.

14) does not have any known statistical meaning while the first term is based on a statistical model of multi-channel signals. It can be considered to evaluate the posterior distribution with the consistency projection, which is included in our future work.

To confirm the effectiveness of the proposed system, an experiment of multi-channel speech enhancement under diffuse noise was conducted. DNN-based MWFs were compared with various baseline methods including T-F masking and MB. In the following subsections, the DNN-based MWFs using DNNs trained by the proposed objective functions given by Eqs. (13) and (14) are refereed to as Prop. 1 and Prop. 2, respectively.

In both training and testing, the clean speech in TIMIT corpus [23] and noise from Diverse Environments Multichannel Acoustic Noise Database (DEMAND) [24] were used. The measured impulse responses in Multichannel Impulse Response Database (MIRD) [25] were convoluted to the above dry sources where the 1st channel of the noise in DEMAND was used as the dry source. The distance between the speaker and microphones was set to 1 m, and the azimuth of each talker is randomly selected from 13 points (from −90∘ to 90∘ with the intervals of 15∘). On the other hand, diffuse noise was generated by playing noise from all points. Note that the noise played at each point is obtained by splitting the original noise into 26 periods. The first half was used in the training/validation and the other was used in the testing. The number of microphones was 2 where the distance between microphones was set to 3 cm.

is randomly generated from a Beta distribution.

. The signal-to-noise ratio (SNR) of the training/validation set was adjusted from

−6 to 12 dB. At the training, the reverberation time (RT60) was 160 ms. On the other hand, at the testing, 300 speeches randomly selected from the testing set of TIMIT were used as clean speach, and the later 13 periods of the noise were used. We evaluated under two reverberation conditions: RT60=160 ms and RT60=360 ms. All the speeches were sampled at 16 kHz, and STFT was computed using the Hann window whose length was 32 ms with 8 ms shift.

We compared the proposed methods with the following baseline methods. At first, T-F masking was used as a well-known monaural speech enhancement approach. To confirm the effectiveness of considering the consistency, three objective functions [the phase sensitive approximation (PSA) [26], PSA with the consistency projection (PSA+Proj) [19], and WA [18]] were compared. MB [5] was also conducted which used a DNN trained based on PSA. Although several iterative methods using DNN have been proposed in multi-channel source separation [4, 27, 28], we only compared the proposed system with aforementioned non-iterative methods because it is non-iterative. The performance of the proposed method can be improved by unifying iterative methods.

is the utterance-level mean and variance normalization. As in a previous study

[29], the phase-difference between two microphones was also used as a input feature:

where Arg(⋅) is the complex argument.

The DNN for the proposed methods is illustrated in Fig. 3

0.3 was applied to each BLSTM layer and dense layer without the last layers. The networks are trained on 128-frame segments using the Adam optimizer over 200epochs. The learning rate was decayed by multiplying 0.5 if the objective function on the validation set did not decrease for 3 consecutive epochs, and the initial learning rate was set to 0.0001. In Prop. 2, λ was set to 1. In baseline methods, we used only the T-F mask estimation part of the DNN illustrated in Fig. 3.

Note that all systems were implemented using TensorFlow in which STFT and iSTFT are implemented with their backpropagation. In addition, it supports a lot of complex-valued operations and their derivatives. Hence, we can easily apply MWF in the training.

The performances of multi-channel speech enhancement were evaluated by the signal-to-distortion ratio (SDR), cepstrum distortion (CD), and PESQ. The experimental results are summarized in Table 1 in which the bold font represents the best score in each condition. As can be seen from both reverberation conditions, MB resulted in the lowest performance because it does not consider non-stationary characteristics of speech. In T-F masking, consistency-aware methods, PSA+Proj and WA, outperformed the original PSA in terms of SDR and PESQ. This results confirmed the importance of the consistency.

In this paper, we described the system of DNN-based multi-channel speech enhancement where the DNN is trained to maximize the quality of the time-domain signal estimated by the DNN-based MWF. We further proposed two objective functions defined on the enhanced time-domain signal. Our experimental results confirmed the effectiveness of the DNN-based MWF and proposed objective functions in multi-channel speech enhancement. Future work includes combining the proposed system with iterative algorithms.