Partial quorum systems are widely used in distributed key-value stores due to their latency benefits at the expense of providing weaker consistency guarantees. The probabilistically bounded staleness framework (PBS) studied the latency-consistency trade-off of Dynamo-style partial quorum systems through Monte Carlo event-based simulations. In this paper, we study the latency-consistency trade-off for such systems analytically and derive a closed-form expression for the inconsistency probability. Our approach allows fine-tuning of latency and consistency guarantees in key-value stores, which is intractable using Monte Carlo event-based simulations. 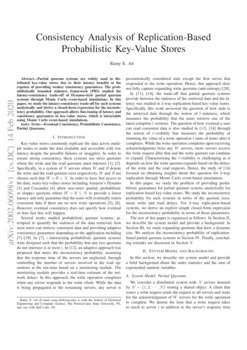 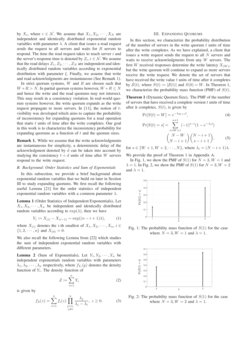 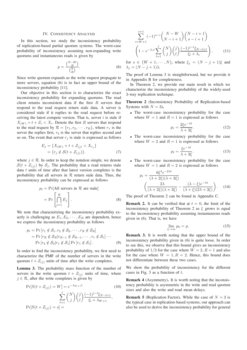 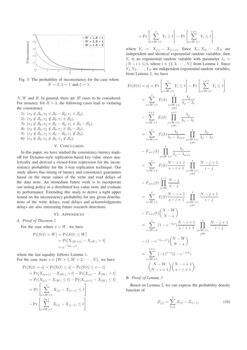 A note on a PDE approach to option pricing under xVA

In this paper we study partial differential equations (PDEs) that can be...
Falko Baustian, et al. ∙

Limitations of CAP theorem imply that if availability is desired in the ...
Duong Nguyen, et al. ∙

In this paper, we study the tradeoffs between complexity and reliability...
Baptiste Cavarec, et al. ∙

On Efficiently Partitioning a Topic in Apache Kafka

Key-value stores commonly replicate the data across multiple nodes to make the data available and accessible with low latency despite the possible failures or stragglers. In order to ensure strong consistency, these systems use strict quorums where the write and the read quorums must intersect [1, 2]. Specifically, in a system of N servers where W and R denote the write and the read quorum sizes respectively, W and R are chosen such that W+R>N. In order to have fast access to the data, many key-values stores including Amazon’s Dynamo [3] and Cassandra [4] allow non-strict (partial, probabilistic or sloppy) quorums where W+R≤N to provide a lower latency and only guarantee that the users will eventually return consistent data if there are no new write operations[5, 6]. However, eventual consistency does not specify how eventual or how fast this will happen.

Several works studied probabilistic quorum systems, attempted to quantify the staleness of the data retrieved, how soon users can retrieve consistent data and providing adaptive consistency guarantees depending on the application including [7, 8, 9, 10, 11, 12, 13, 14, 15, 16, 17, 18, 19]. In [7], ϵ-intersecting probabilistic quorum systems were designed such that the probability that any two quorums do not intersect is at most ϵ. In [12]

, an adaptive approach was proposed that tunes the inconsistency probability, assuming that the response time of the servers are neglected, through controlling the number of servers involved in the read operations at the run-time based on a monitoring module. The monitoring module provides a real-time estimate of the network delays. In this approach, the write operation completes when any server responds to the write client. While the data is being propagated to the remaining servers, any server is pessimistically considered stale except the first server that responded to the write operation. Hence, this approach does not fully capture expanding write quorums (anti-entropy)

In [11, 14], the trade-off that partial quorum systems provide between the staleness of the retrieved data and the latency was studied in 3-way replication-based key-value stores. Specifically, this work answered the question of how stale is the retrieved data through the notion of l-staleness, which measures the probability that the users retrieve one of the latest complete l versions. The question of how eventual a user can read consistent data is also studied in [11, 14] through the notion of t-visibility that measures the probability of returning the value of a write operation t units of times after it completes. While the write operation completes upon receiving acknowledgments from any W servers, more servers receive the write request after that and the write quorum can continue to expand. Characterizing the t-visibility is challenging as it depends on how the write quorum expands based on the delays of the write and the read requests. Hence, the study of [14] focused on obtaining insights about this question for 3-way replication through Monte Carlo event-based simulations.

In this paper, we study the problem of providing probabilistic guarantees for partial quorum systems analytically for replication-based key-value stores. We study the inconsistency probability for such systems in terms of the quorum sizes, mean write and read delays. For 3-way replication-based systems, we derive an explicit simple closed-form expression for the inconsistency probability in terms of those parameters.

The rest of this paper is organized as follows. In Section II, we describe the system model and provide a background. In Section III, we study expanding quorums that have a dynamic size. We analyze the inconsistency probability of replication-based partial quorum systems in Section IV. Finally, concluding remarks are discussed in Section V.

In this section, we describe our system model and provide a brief background about the order statistics and the sum of exponential random variables.

ξ. Finally, we assume that write and read acknowledgments are instantaneous (See Remark 1).

In strict quorum systems, W and R are chosen such that W+R>N. In partial quorum systems however, W+R≤N and hence the write and the read quorums may not intersect. This may result in a consistency violation. In real-world quorum systems however, the write quorum expands as the write request propagate to more servers. In [11], the notion of t-visibility was developed which aims to capture the probability of inconsistency for expanding quorums for a read operation that starts t units of time after the write completes. Our goal in this work is to characterize the inconsistency probability for expanding quorums as a function of t and the quorum sizes.

While we assume that the write acknowledgments are instantaneous for simplicity, a deterministic delay of the acknowledgment denoted by d can be taken into account by studying the consistency t+d units of time after W servers respond to the write request.

Let X1,X2,⋯,Xn be independent and identically distributed random variables according to exp(λ), then we have

We also recall the following Lemma from [22] which studies the sum of independent exponential random variables with different parameters.

In this section, we characterize the probability distribution of the number of servers in the write quorum

t units of time after the write completes. As we have explained, a client that issues a write request sends the request to all N servers and waits to receive acknowledgments from any W servers. The first W received responses determine the write latency X(W), but the write quorum will continue to expand as more servers receive the write request. We denote the set of servers that have received the write value t units of time after it completes by S(t), where S(t)\coloneqq|S(t)| and S(0)=W. In Theorem 1, we characterize the probability mass function (PMF) of S(t).

The PMF of the number of servers that have received a complete version t units of time after it completes, S(t), is given by

We provide the proof of Theorem 1 in Appendix A.

Since write quorum expands as the write request propagate to more servers, equation (6) is in fact an upper bound of the inconsistency probability [11].

In order to find the inconsistency probability, we first need to characterize the PMF of the number of servers in the write quorum t+Z(j) units of time after the write completes.

The probability mass function of the number of servers in the write quorum t+Z(j) units of time, where j∈R, after the write completes is given by

The proof of Lemma 3 is straightforward, but we provide it in Appendix B for completeness.

In Theorem 2, we provide our main result in which we characterize the inconsistency probability of the widely-used 3-way replication technique.

The proof of Theorem 2 can be found in Appendix C.

We show the probability of inconsistency for the different cases in Fig. 3 as a function of t.

While the case of N=3 is the typical case in replication-based systems, our approach can also be used to derive the inconsistency probability for general N,W and R. In general, there are R! cases to be considered. For instance, for R=3, the following cases lead to violating the consistency

In this paper, we have studied the consistency-latency trade-off for Dynamo-style replication-based key-value stores analytically and derived a closed-form expression for the inconsistency probability for the 3-way replication technique. Our study allows fine-tuning of latency and consistency guarantees based on the mean values of the write and read delays of the data store. An immediate future work is to incorporate our tuning policy in a distributed key-value store and evaluate its performance. Extending this study to derive a tight upper bound on the inconsistency probability for any given distributions of the write delays, read delays and acknowledgments delays are also interesting future research directions.

For the case where s=W, we have

, we can express the probability density function of

Similarly, for the case where W=2 and R=1, we have

For the case where R=2, we can express the probability of inconsistency as follows

If r1∉S1, it may happen that r1∉S2 as well or r1∈S2 and these two cases need to be handled separately. Therefore, we express the inconsistency probability as follows

It is important to note that

Therefore, we can express the probability of inconsistency in this case as follows

The author would like to thank Viveck Cadambe and Mohammad Fahim for their helpful comments.