We investigate the power of non-determinism in purely functional programming languages with higher-order types. Specifically, we set out to characterise the hierarchy NP ⊆ NEXP ⊆ NEXP^(2) ⊆...⊆ NEXP^(k) ⊆... solely in terms of higher-typed, purely functional programs. Although the work is incomplete, we present an initial approach using cons-free programs with immutable functions. 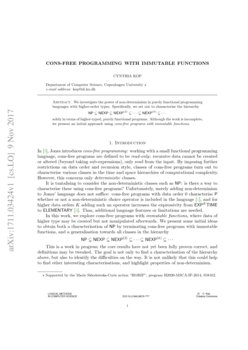 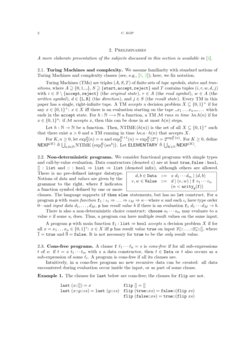 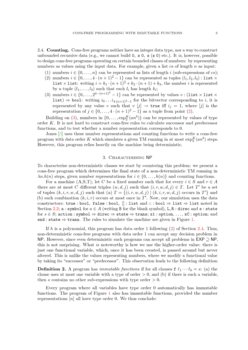 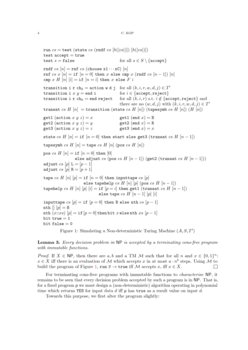 In [3], Jones introduces cons-free programming: working with a small functional programming language, cons-free programs are defined to be read-only: recursive data cannot be created or altered (beyond taking sub-expressions), only read from the input. By imposing further restrictions on data order and recursion style, classes of cons-free programs turn out to characterise various classes in the time and space hierarchies of computational complexity. However, this concerns only deterministic classes.

It is tantalising to consider the non-deterministic classes such as NP: is there a way to characterise these using cons-free programs? Unfortunately, merely adding non-determinism to Jones’ language does not suffice: cons-free programs with data order 0 characterise P whether or not a non-deterministic choice operator is included in the language [1], and for higher data orders K adding such an operator increases the expressivity from EXPKTIME to ELEMENTARY [4]. Thus, additional language features or limitations are needed.

In this work, we explore cons-free programs with immutable functions, where data of higher type may be created but not manipulated afterwards. We present some initial ideas to obtain both a characterisation of NP by terminating cons-free programs with immutable functions, and a generalisation towards all classes in the hierarchy

This is a work in progress; the core results have not yet been fully proven correct, and definitions may be tweaked. The goal is not only to find a characterisation of the hierarchy above, but also to identify the difficulties on the way. It is not unlikely that this could help to find other interesting characterisations, and highlight properties of non-determinism.

A more elaborate presentation of the subjects discussed in this section is available in [4].

Turing Machines (TMs) are triples (A,S,T) of finite sets of tape symbols, states and transitions, where A⊇{0,1,\textvisiblespace}, S⊇{start,accept,reject} and T contains tuples (i,r,w,d,j) with i∈S∖{accept,reject} (the original state), r∈A (the read symbol), w∈A (the written symbol), d∈{L,R} (the direction), and j∈S (the result state). Every TM in this paper has a single, right-infinite tape. A TM accepts a decision problem X⊆{0,1}+ if for any x∈{0,1}+: x∈X iff there is an evaluation starting on the tape \textvisiblespacex1…xn\textvisiblespace% \textvisiblespace… which ends in the accept state. For h:N⟶N a function, a TM M runs in time λn.h(n) if for x∈{0,1}n: if M accepts x, then this can be done in at most h(n) steps.

We consider functional programs with simple types and call-by-value evaluation. Data constructors (denoted c) are at least true,false:bool, []:list and :::bool⇒list⇒list (denoted infix), although others are allowed.

There is no pre-defined integer datatype. Notions of data and values are given by the grammar to the right, where f indicates a function symbol defined by one or more clauses. The language supports ifthenelse statements, but has no let construct. For a program p with main function f1:ι1⇒⋯⇒ιM⇒κ—where κ and each ιi have type order 0—and input data d1,…,dM, p has result value b if there is an evaluation f1 d1⋯dM→b.

There is also a non-deterministic choice construct: choose s1⋯sm may evaluate to a value v if some si does. Thus, a program can have multiple result values on the same input.

Intuitively, in a cons-free program no new recursive data can be created: all data encountered during evaluation occur inside the input, or as part of some clause.

Cons-free programs neither have an integer data type, nor a way to construct unbounded recursive data (e.g., we cannot build 0, s 0, s (s 0) etc.). It is, however, possible to design cons-free programs operating on certain bounded classes of numbers: by representing numbers as values using the input data. For example, given a list cs of length n as input:

Building on (3), numbers in {0,…,expK2(anb)} can be represented by values of type order K. It is not hard to construct cons-free rules to calculate successor and predecessor functions, and to test whether a number representation corresponds to 0.

Jones [3] uses these number representations and counting functions to write a cons-free program with data order K which simulates a given TM running in at most expK2(anb) steps. However, this program relies heavily on the machine being deterministic.

To characterise non-deterministic classes we start by countering this problem: we present a cons-free program which determines the final state of a non-deterministic TM running in λn.h(n) steps, given number representations for i∈{0,…,h(n)} and counting functions.

For a machine (A,S,T), let C be a fixed number such that for every i∈S and r∈A there are at most C different triples (w,d,j) such that (i,r,w,d,j)∈T. Let T′ be a set of tuples (k,i,r,w,d,j) such that (a) T={(i,r,w,d,j)∣(k,i,r,w,d,j) occurs in T′} and (b) each combination (k,i,r) occurs at most once in T′. Now, our simulation uses the data constructors: true:bool, false:bool, []:list and :::bool⇒list⇒list noted in Section 2.2; a:symbol for a∈A (writing B for the blank symbol), L,R:direc and s:state for s∈S; action:symbol⇒direc⇒state⇒trans; x1:option, …, xC:option; and end:state⇒trans. The rules to simulate the machine are given in Figure 1.

If h is a polynomial, this program has data order 1 following (2) of Section 2.4. Thus, non-deterministic cons-free programs with data order 1 can accept any decision problem in NP. However, since even deterministic such programs can accept all problems in EXP⊇NP, this is not surprising. What is noteworthy is how we use the higher-order value: there is just one functional variable, which, once it has been created, is passed around but never altered. This is unlike the values representing numbers, where we modify a functional value by taking its “successor” or “predecessor”. This observation leads to the following definition:

A program has immutable functions if for all clauses f ℓ1⋯ℓk=s: (a) the clause uses at most one variable with a type of order >0, and (b) if there is such a variable, then s contains no other sub-expressions with type order >0.

Every decision problem in NP is accepted by a terminating cons-free program with immutable functions.

For terminating cons-free programs with immutable functions to characterise NP, it remains to be seen that every decision problem accepted by such a program is in NP. That is, for a fixed program p we must design a (non-deterministic) algorithm operating in polynomial time which returns YES for input data d iff p has true as a result value on input d.

Towards this purpose, we first alter the program slightly:

If ⟦p⟧(d1,…,dM)↦b, then ⟦p′⟧(d1,…,dm)↦b, where p′ is obtained from p by replacing all sub-expressions s t1⋯tn in the right-hand side of a clause where s is not an application by s∘t1⋯tn. Here,

In addition, there is a transformation which preserves and reflects ⟦p⟧(d1,…,dM)↦b such that all argument types of defined symbols and all clauses have type order ≤1 and there are no clauses f ℓ1⋯ℓk=x with x a variable of functional type.

[Idea] The if/choose change trivially works, the type order change uses the restriction on data order as detailed in [4, Lemma 1] and functional variables can be avoided because, by immutability, all clauses for f must have a variable as their right-hand side.

We implicitly assume that the transformations of Lemma 4 have been done.

To reason on values in the algorithm, we define a semantical way to describe them.

By relating values of type σ to elements of ⟦σ⟧B, we can prove that Algorithm 6 below returns b if and only if b is a result value of p for input d1,…,dM.

Now repeat the following steps, until no further changes are made:

Output: return the set of all b such that f1 d1⋯dM↦b is confirmed.

This algorithm has exponential complexity since, for σ of order 1, the cardinality of ⟦σ⟧B is exponential in the input size (the number of constructors in d1,…,dM). However, since a program with immutable functions cannot effectively use values with type order >1—so can be transformed to give all values and clauses type order 1 or 0—and the size of each e∈⟦σ⟧B is polynomial, the following non-deterministic algorithm runs in polynomial time:

Let S:={κ∣κ is a type of order 0 which is used as argument type of some f}. Let T:=max{Card(⟦κ⟧B)∣κ∈S}, and let N:=⟨number of function symbols⟩⋅T2⋅⟨greatest arity⟩⋅⟨% greatest clause depth⟩+1. For every clause f ℓ1⋯ℓk=s of base type, and every sub-expression of s which has a higher type σ and is not a variable, generate N elements of ⟦σ⟧B. Let Ξ:=⋃κ∈S⟦κ⟧B∪{ the functional “values” thus generated }.

Now run Algorithm 6, but only consider statements with all ei and o in Ξ.

p has result value b iff there is an evaluation of Algorithm 7 which returns a set containing b.

[Proof Idea] We can safely assume that if f b1⋯bm→d, it is derived in the same way each time it is used. Therefore, in any derivation, at most T⟨greatest arity+1⟩ distinct values are created to be passed around; the formation of each value may require ⟨number of function symbols⟩⋅T⟨greatest arity⋅⟨greatest clause depth⟩−1 additional helper values.

By Lemma 3 and Proposition 8, we have: terminating cons-free programs with immutable functions characterise NP. This also holds for the limitation to any data order ≥1.

A program has order n immutable functions if for all clauses f ℓ1⋯ℓk=s: (a) the clause uses at most one variable with a type of order ≥n, and (b) if there is such a variable, then s contains no other sub-expressions with type order ≥n.

[Proof Idea] An easy adaptation from the proofs of Lema 3 and Proposition 8.

If Propositions 8 and 10 hold, we have obtained a characterisation of the hierarchy NP⊊NEXP⊊NEXP(2)⊊⋯⊊NEXP(K)⊊⋯ in primarily syntactic terms.

Arguably, this is a rather inelegant characterisation, both because of the termination requirement and because the definition of immutability itself is somewhat arcane; it is not a direct translation of the intuition that functional values, once created, may not be altered.

The difficulty is that non-determinism is very powerful, and easily raises expressivity too far when not contained. This is evidenced in [4] where adding non-determinism to cons-free programs of data order K≥1 raises the characterised class from EXP(K) to ELEMENTARY. (In [4], we did not use immutability; alternatively restricting the clauses to disallow partial application of functional variable resulted in the original hierarchy P⊊EXP(1)⊊EXP(2)⊊⋯.) In our setting, we must be careful that the allowances made to build the initial function cannot be exploited to manipulate exponentially many distinct values. For example, if we drop the termination requirement, we could identify the lowest number i<2n such that P(i) holds for any polytime-decidable property P, as follows:

Here, the clauses for succ F [n] [j] result in true if bj=1 when representing the successor of F as a bitvector b1…bn, and in false otherwise. It is unlikely that the corresponding decision problem is in NP. Similar problems may arise if we allow multiple higher-order variables, although we do not yet have an example illustrating this problem.

In the future, we intend to complete the proofs, and study these restrictions further. Even if this does not lead to an elegant characterisation of the NEXP(K) hierarchy, it is likely to give further insights in the power of non-determinism in higher-order cons-free programs.