Millimeter-wave (mmWave) offers high data rate and bandwidth for air-to-everything (A2X) communications including air-to-air, air-to-ground, and air-to-tower. MmWave communication in the A2X network is sensitive to buildings blockage effects. In this paper, we propose an analytical framework to define and characterise the connectivity for an aerial access point (AAP) by jointly using stochastic geometry and random shape theory. The buildings are modelled as a Boolean line-segment process with fixed height. The blocking area for an arbitrary building is derived and minimized by optimizing the altitude of AAP. A lower bound on the connectivity probability is derived as a function of the altitude of AAP and different parameters of users and buildings including their densities, sizes, and heights. Our study yields guidelines on practical mmWave A2X networks deployment. 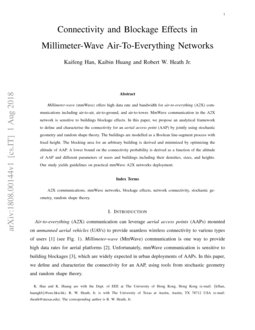 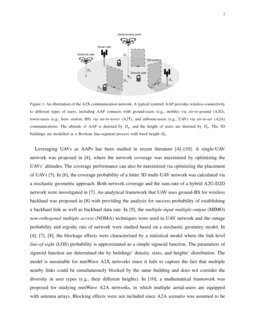 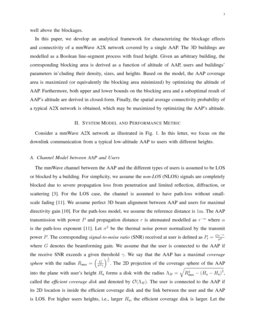 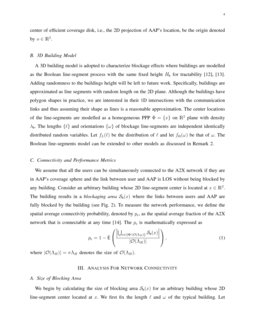 Air-to-everything (A2X) communication can leverage aerial access points (AAPs) mounted on unmanned aerial vehicles (UAVs) to provide seamless wireless connectivity to various types of users [1] (see Fig. 1). Millimeter-wave (MmWave) communication is one way to provide high data rates for aerial platforms [2]. Unfortunately, mmWave communication is sensitive to building blockages [3], which are widely expected in urban deployments of AAPs. In this paper, we define and characterize the connectivity for an AAP, using tools from stochastic geometry and random shape theory.

Leveraging UAVs as AAPs has been studied in recent literature [4, 5, 6, 7, 8, 9, 10]. A single-UAV network was proposed in [4], where the network coverage was maximized by optimizing the UAVs’ altitudes. The coverage performance can also be maximized via optimizing the placement of UAVs [5]. In [6], the coverage probability of a finite 3D multi-UAV network was calculated via a stochastic geometric approach. Both network coverage and the sum-rate of a hybrid A2G-D2D network were investigated in [7]. An analytical framework that UAV uses ground-BS for wireless backhaul was proposed in [8] with providing the analysis for success probability of establishing a backhaul link as well as backhaul data rate. In [9], the multiple-input multiple-output (MIMO) non-orthogonal multiple access (NOMA) techniques were used in UAV network and the outage probability and ergodic rate of network were studied based on a stochastic geometry model. In [4, 7, 8], the blockage effects were characterized by a statistical model where the link-level line-of-sight

(LOS) probability is approximated as a simple sigmoid function. The parameters of sigmoid function are determined the by buildings’ density, sizes, and heights’ distribution. The model is unsuitable for mmWave A2X networks since it fails to capture the fact that multiple nearby links could be simultaneously blocked by the same building and does not consider the diversity in user types (e.g., their different heights). In

[10], a mathematical framework was proposed for studying mmWave A2A networks, in which multiple aerial-users are equipped with antenna arrays. Blocking effects were not included since A2A scenario was assumed to be well above the blockages.

In this paper, we develop an analytical framework for characterizing the blockage effects and connectivity of a mmWave A2X network covered by a single AAP. The 3D buildings are modelled as a Boolean line-segment process with fixed height. Given an arbitrary building, the corresponding blocking area is derived as a function of altitude of AAP, users and buildings’ parameters in’cluding their density, sizes, and heights. Based on the model, the AAP coverage area is maximized (or equivalently the blocking area minimized) by optimizing the altitude of AAP. Furthermore, both upper and lower bounds on the blocking area and a suboptimal result of AAP’s altitude are derived in closed-form. Finally, the spatial average connectivity probability of a typical A2X network is obtained, which may be maximized by optimizing the AAP’s altitude.

Consider a mmWave A2X network as illustrated in Fig. 1. In this letter, we focus on the downlink communication from a typical low-altitude AAP to users with different heights.

The mmWave channel between the AAP and the different types of users is assumed to be LOS or blocked by a building. For simplicity, we assume the non-LOS (NLOS) signals are completely blocked due to severe propagation loss from penetration and limited reflection, diffraction, or scattering [3]. For the LOS case, the channel is assumed to have path-loss without small-scale fading [11]. We assume perfect 3D beam alignment between AAP and users for maximal directivity gain [10]. For the path-loss model, we assume the reference distance is 1m. The AAP transmission with power P and propagation distance r is attenuated modelled as r−α where α is the path-loss exponent [11]. Let σ2 be the thermal noise power normalized by the transmit power P. The corresponding signal-to-noise ratio (SNR) received at user is defined as Pr=Gr−ασ2 where G denotes the beamforming gain. We assume that the user is connected to the AAP if the receive SNR exceeds a given threshold γ. We say that the AAP has a maximal coverage sphere with the radius Rmax=(Gσ2γ)1α. The 2D projection of the coverage sphere of the AAP into the plane with user’s height Hu forms a disk with the radius ΛH=√R2max−(Ha−Hu)2, called the efficient coverage disk and denoted by O(ΛH). The user is connected to the AAP if its 2D location is inside the efficient coverage disk and the link between the user and the AAP is LOS. For higher users heights, i.e., larger Hu, the efficient coverage disk is larger. Let the center of efficient coverage disk, i.e., the 2D projection of AAP’s location, be the origin denoted by o∈R2.

A 3D building model is adopted to characterize blockage effects where buildings are modelled as the Boolean line-segment process with the same fixed height Hb for tractability [12, 13]. Adding randomness to the buildings height will be left to future work. Specifically, buildings are approximated as line segments with random length on the 2D plane. Although the buildings have polygon shapes in practice, we are interested in their 1D intersections with the communication links and thus assuming their shape as lines is a reasonable approximation. The center locations of the line-segments are modelled as a homogeneous PPP Φ={x} on R2 plane with density λb. The lengths {ℓ} and orientations {ω}

fL(ℓ) be the distribution of ℓ and let fΘ(ω) be that of ω. The Boolean line-segments model can be extended to other models as discussed in Remark 2.

We assume that all the users can be simultaneously connected to the A2X network if they are in AAP’s coverage sphere and the link between user and AAP is LOS without being blocked by any building. Consider an arbitrary building whose 2D line-segment center is located at x∈R2. The building results in a blockaging area Sb(x) where the links between users and AAP are fully blocked by the building (see Fig. 2). To measure the network performance, we define the spatial average connectivity probability, denoted by pc, as the spatial average fraction of the A2X network that is connectable at any time [14]. The pc is mathematically expressed as

We begin by calculating the size of blocking area Sb(x) for an arbitrary building whose 2D line-segment center located at x. We first fix the length ℓ and ω of the typical building. Let dx be the distance between x and o. Let dS be the minimal (shortest) distance between o and line-segment (2D projection of building) and dL be the maximal (longest) distance (see the lines oq and op in Fig. 2). If the AAP’s altitude does not exceed building’s height, i.e., Ha≤Hb, the size of blocking area Sb(x) (see the gray area covered by qpsvt in Fig. 2) is calculated by 12[θΛ2H−dSdLsinθ], where θ=arccos(d2x−14ℓ2dSdL) and

If Ha>Hb, the blocking area Sb(x) could be further reduced since the AAP covers more area via LoS links due to the benefit of higher altitude. Compared with the coverage area of AAP when Ha≤Hb, we define this additional coverage area due to Ha>Hb as the coverage gain, denoted by Sgain(x) (see the area covered by tvu (green area) in Fig. 2). Based on the basic geometric calculation, Sgain(x) is calculated as

The blocking area is

where 1(⋅) denotes the indicator function and Sgain(x) is given in (3).

The calculations follow from geometry, the detailed proof is omitted due to limited space. To simplify the result in Lemma 1 and obtain more insights therein, both upper and lower bounds of Sgain(x) are derived. By assuming the distance between any point on building’s line-segment and o has the same value dL or dS given in (2), the lower and upper bounds of Sgain(x), denoted by S(−)gain(x) and S(+)gain(x), are derived as

and S(+)gain(x) is obtained by replacing dL in S(−)gain(x) with dS. The result for the bounds of Sgain(x) is summarized as follows.

The coverage gain Sgain(x) can be upper or lower bounded as follows.

A larger AAP’s altitude Ha can effectively increase the coverage (LoS) area, while shrinking the radius of effective coverage disk. We characterize this behavior by optimizing S(−)gain(x) to obtain a suboptimal solution for Ha. When ⎛⎝dL1−Hb−HuHa−Hu⎞⎠2<Λ2H, we have

Extending the current building model to any model that each building has a random size in 2D projection, such as rectangle [3] or disk, follows a similar analytical structure. The main difference is that the area of buildings should be included into blocking area Sb. Also, Sgain needs to be recalculated based on different building’s shape. For instance, if the 2D projection of a building is modelled as a disk with radius diameter ℓ (i.e., cylinder in 3D), the blockaging area is recalculated as Sb=θ2Λ2H−(dxℓ+18ℓ2(θ+π))−1(Ha>Hb)Sgain(x), where Sgain(x) is lower bounded by S(−)gain(x)=θ2⎡⎢⎣Λ2H−⎛⎝11−Hb−HuHa−Hu(dx+12ℓ)⎞⎠2⎤⎥⎦+.

In this section, we calculate the connectivity probability defined in (1). Notice that the spatial correlation between different buildings exsits such as the blocking areas of multiple buildings may overlap with each other. For analytical tractablility, we ignore the spatial correlation of buildings due to overlap in the blockaging area of multiple buildings. This assumption is accurate when density of buildings is not very high, which has been validated in [3]. We derive a lower bound of pc by jointly using Campbell’s theorem, random shape theory, with the results given in Lemmas 1 and 2.

The connectivity probability pc is lower bounded by p(−)c as

Based on the discussion in Remark 1 and expression of F(r,ℓ,ω), the connectivity probability pc can also be maximizing by optimizing the APP’s altitude Hu.

In this section, we validate the analytical results via Monte Carlo simulation. The radius of maximal coverage sphere is Rmax=100m. The height of building is Hb=30m and that of user is Hu=2m. The density of buildings is λb=2×10−4m2. The length ℓ and orientation ω

Fig. 3 shows the coverage gain Sgain calculated via (3) and its bounds S(+)gain, S(−)gain calculated via Lemma 2 versus the altitude of AAP Ha. It is observed that Sgain is well bounded by S(+)gain and S(−)gain. The lower bound becomes tighter when Ha is small and the upper bound becomes tighter when Ha is large. This agrees with the intuition because larger or smaller altitude of AAP results in larger or smaller coverage gain, respectively, which makes the bound tighter. Moreover, Sgain is maximized via optimizing Ha, which confirms the discussion given in Remark 1.

In Fig. 4, we validate the lower bound of connectivity probability pc, i.e., p(−)c, given in Theorem 1 by comparing it with the exact value via Monte Carlo simulation. It is observed that both pc and p(−)c decrease with building density λb. More importantly, p(−)c becomes tighter when buildings are sparsely deployed, which aligns with the discussion in Remark 3.

In this letter, we propose an analytical framework to define and characterize the connectivity in a mmWave A2X network. Based on the blockage model that buildings are modeled by the Boolean line-segment process with fixed height, we calculate the blockage area due to an arbitrary building and the connectivity probability of an AAP. Moreover, the AAP’s altitude can be optimized to maximize the coverage area as well as the network connectivity. Future work will focus on studying the effects of spatial correlation of buildings on network connectivity and modelling a A2X network including multi-AAP’s connections.

-a Proof of Theorem 1

By omitting the spatial correlations between {Sb(x)}, connectivity probability pc defined in (1) is lowered bounded as follows.