There has been strong recent interest in testing interval null hypothesis for improved scientific inference. For example, Lakens et al (2018) and Lakens and Harms (2017) use this approach to study if there is a pre-specified meaningful treatment effect in gerontology and clinical trials, which is different from the more traditional point null hypothesis that tests for any treatment effect. Two popular Bayesian approaches are available for interval null hypothesis testing. One is the standard Bayes factor and the other is the Region of Practical Equivalence (ROPE) procedure championed by Kruschke and others over many years. This paper establishes a formal connection between these two approaches with two benefits. First, it helps to better understand and improve the ROPE procedure. Second, it leads to a simple and effective algorithm for computing Bayes factor in a wide range of problems using draws from posterior distributions generated by standard Bayesian programs such as BUGS, JAGS and Stan. The tedious and error-prone task of coding custom-made software specific for Bayes factor is then avoided. 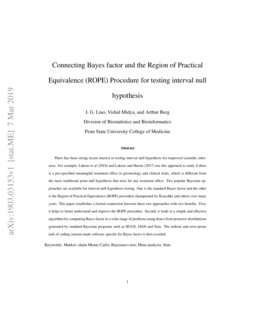 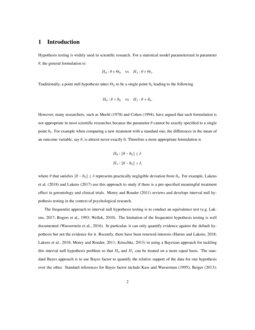 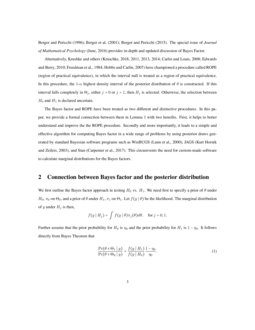 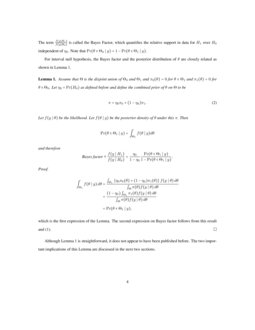 From p-Values to Posterior Probabilities of Hypothesis

Defining a credible interval is not always possible with "point-null” priors: A lesser-known consequence of the Jeffreys-Lindley paradox

In many common situations, a Bayesian credible interval will be, given t...
Harlan Campbell, et al. ∙

In this study, we propose a two-stage procedure for hypothesis testing, ...
Yi Zhao, et al. ∙

Hypothesis testing is widely used in scientific research. For a statistical model parameterized in parameter θ, the general formulation is:

Traditionally, a point null hypothesis takes Θ0 to be a single point θ0 leading to the following

However, many researchers, such as Meehl (1978) and Cohen (1994), have argued that such formulation is not appropriate in most scientific researches because the parameter θ cannot be exactly specified to a single point θ0. For example when comparing a new treatment with a standard one, the differences in the mean of an outcome variable, say θ, is almost never exactly 0. Therefore a more appropriate formulation is

where θ that satisfies ∥θ−θ0∥≤δ represents practically negligible deviation from θ0. For example, Lakens et al. (2018) and Lakens (2017) use this approach to study if there is a pre-specified meaningful treatment effect in gerontology and clinical trials. Morey and Rouder (2011) reviews and develops interval null hypothesis testing in the context of psychological research.

The frequentist approach to interval null hypothesis testing is to conduct an equivalence test (e.g. Lakens, 2017; Rogers et al., 1993; Wellek, 2010). The limitation of the frequentist hypothesis testing is well documented (Wasserstein et al., 2016). In particular, it can only quantify evidence against the default hypothesis but not the evidence for it. Recently, there have been renewed interests (Harms and Lakens, 2018; Lakens et al., 2018; Morey and Rouder, 2011; Kruschke, 2013) in using a Bayesian approach for tackling this interval null hypothesis problem so that H0 and H1 can be treated on a more equal basis. The standard Bayes approach is to use Bayes factor to quantify the relative support of the data for one hypothesis over the other. Standard references for Bayes factor include Kass and Wasserman (1995); Berger (2013); Berger and Pericchi (1996); Berger et al. (2001); Berger and Pericchi (2015). The special issue of Journal of Mathematical Psychology (June, 2016) provides in-depth and updated discussion of Bayes Factor.

Alternatively, Krushke and others (Kruschke, 2018, 2011, 2013, 2014; Carlin and Louis, 2008; Edwards and Berry, 2010; Freedman et al., 1984; Hobbs and Carlin, 2007) have championed a procedure called ROPE (region of practical equivalence), in which the interval null is treated as a region of practical equivalence. In this procedure, the 1-α highest density interval of the posterior distribution of θ is constructed. If this interval falls completely in Θj, either j=0 or j=1, then Hj is selected. Otherwise, the selection between H0 and H1 is declared uncertain.

The Bayes factor and ROPE have been treated as two different and distinctive procedures. In this paper, we provide a formal connection between them in Lemma 1 with two benefits. First, it helps to better understand and improve the the ROPE procedure. Secondly and more importantly, it leads to a simple and effective algorithm for computing Bayes factor in a wide range of problems by using posterior draws generated by standard Bayesian software programs such as WinBUGS (Lunn et al., 2000), JAGS (Kurt Hornik and Zeileis, 2003), and Stan (Carpenter et al., 2017). This circumvents the need for custom-made software to calculate marginal distributions for the Bayes factors.

2 Connection between Bayes factor and the posterior distribution

Further assume that the prior probability for

. It follows directly from Bayes Theorem that

The term f(y∣H1)f(y∣H0) is called the Bayes Factor, which quantifies the relative support in data for H1 over H0 independent of η0. Note that Pr(θ∈Θ0∣y)=1−Pr(θ∈Θ1∣y).

For interval null hypothesis, the Bayes factor and the posterior distribution of θ are closely related as shown in Lemma 1.

Let f(y∣θ) be the likelihood. Let f(θ∣y) be the posterior density of θ under this π. Then

which is the first expression of the Lemma. The second expression on Bayes factor follows from this result and (1). ∎

Although Lemma 1 is straightforward, it does not appear to have been published before. The two important implications of this Lemma are discussed in the next two sections.

We now provide additional details of the ROPE procedure. First, ROPE declares undecided between H0 and H1 when the (1−α) HDI is contained in neither Θ0 nor Θ1. This, however, is not fully informative as it fails to distinguish between two different cases: (1) the HDI is almost contained in Θ0 (or alternatively in Θ1); (2) the HDI is spread more evenly between Θ0 and Θ1. To improve on this, note that Pr(θ∈Θj∣y)≥(1−α) if any (1−α) credible interval is contained in Θj for j=0 or j=1. Therefore, we propose to directly report Pr(θ∈Θj∣y) with a decision rule to declare for Hj when Pr(θ∈Θj∣y)>1−α. For the two cases above, Pr(θ∈Θ0∣y) is close to 1−α for Case 1 but it is close to 0.5 for Case 2, which is more informative. In addition, Pr(θ∈Θj∣y) connects ROPE directly to Bayes factor as seen in Lemma 1. Reporting Pr(θ∈Θj∣y) was also proposed in Wellek (2010) but Kruschke (2018) seems to reject this idea in favor of using HDI. Our analysis provides additional support for using Pr(θ∈Θj∣y) instead of HDI.

Second, Kruschke and others have touted the greater robustness of ROPE to prior π. Here we reformulate the ROPE procedure in a mathematically equivalent way so that it more closely resembles a Bayes factor formulation. ROPE procedure starts with a single prior distribution, π, on Θ, but by truncating this distribution on Θ0 and Θ1, respectively, we arrive at priors π0 and π1 along with η, the prior probability of Θ0. More specifically, we have

This allows us to explore the greater robustness of the ROPE procedure over the Bayes factor approach. As an example, consider the hypotheses H0:|θ|≤δ vs H1:|θ|>δ, and let π(θ)≡N(0,τ2). As τ→∞, π0 approaches unif(−δ,δ) and π1 becomes more and more diffused on (−∞,−δ)∪(δ,∞). It is well known from Lindley’s paradox that a very diffuse π1 leads to increased support for H0 over H1 (Robert, 2014). However at the same time, η0→0, which compensates for the more diffused π1 as seen from Equation 1. This accounts for the apparent greater robustness of the ROPE procedure. Although the greater robustness is generally desirable, this implicit tangling of π0, π1 and η0 can be difficult to comprehend for many statisticians. How to specify these quantities in a more meaningful way remains a topic for further research.

Bayes factor usually requires custom software to compute the marginal distributions f(y∣H1) and f(y∣H0) through numerical integration. Coding such software can be a tedious and error-prone task. Lemma 1, however, provides a simple way to compute Bayes factor using standard Bayesian programs for drawing from posterior distribution such as Stan (Carpenter et al., 2017), JAGS (Kurt Hornik and Zeileis, 2003), and WinBUGS (Lunn et al., 2000). Let θ(1),…,θ(N) be draws from posterior distribution p(θ∣y) under prior π in Equation (2), where N is the Monte Carlo sample size. Then under general conditions,

are well-tested, high quality software routines that are familiar to most statisticians performing Bayesian analyses. So it is more likely to get correct answers quickly. Third, people have gained considerable experience and understanding of the posterior distribution, and this approach facilitates the adoption of Bayes factor as an integrated part of Bayesian inference. The disadvantage is that it can be computationally less efficient than custom software specifically designed for Bayes factor.

Bayes factor does not depend on the value of η0. In fact, (3) holds for for any 0<η0<1. However, based on our experience, the computational efficiency of drawing Monte Carlo samples from the posterior distribution can be greatly improved when η0 is chosen so that the combined prior π in Equation (2) is made more continuous at the boundary between Θ0 and Θ1.

in a more general setting, proposes the use of harmonic mean approximation and other methods for computing the marginal distributions. Our method, by utilizing the special structure of interval hypotheses, is much simpler.

We demonstrate our methods in the following two two examples.

) consists of changes in systolic blood pressure over 12 weeks for 21 African-American men, 10 of whom took calcium supplements and the remaining 11 took placebo supplements. Testing for equality of means between these two groups with a two-sample t-test (assuming equality of variances) yields a t-statistic of 1.63 and a p-value of 0.12.

We now proceed to analyze the data using the interval null hypothesis Bayes factor. Let X1,…,Xniid∼N(μX,σ2), and let Y1,…,Ymiid∼N(μY,σ2). We are interested in evaluating the standardized effect size

In particular, we consider the following hypotheses:

for some pre-specified δ>0. To compute Bayes factor, we assume the following priors

where τ in θ∈H1 is a parameter to be specified. Note that a larger τ corresponds to a prior distribution θ∈H1 that is more deviated from θ∣H0. Let η0=Pr(H0) be the prior for hypothesis H0. The combined prior π for θ is then (2) in Lemma 1. Given the above priors for μA, σ2 and θ and the likelihoods, we utilize Stan to generate draws θ(1),…,θ(N) from the posterior distribution of θ. We then use Equation (3

) for a consistent estimator of the Bayes factor.

We calculate Bayes factor of H1 over H0 for δ=0.1, which is generally considered a small effect size, over a range of values for τ in the prior for θ∣H1 that reflects different deviations of H1 from H0. The result is plotted in Figure 1. All these Bayes factors are between 1 and 1.4, indicating slightly more support of H1 over H0.

Here we will consider meta analysis of a dataset originally published in Table 10 of Yusuf et al. (1985), which contains mortality data across 22 studies of patients who were treated with either a beta-blocker (treatment group) or placebo (control group) after experiencing a heart attack. The dataset is also reproduced and analyzed in (Gelman et al., 2013, Sec. 5.6). The data from each study forms a 2×2 table and the variables for the ith study are summarized in Table 2.

For the ith study, let pi,j, j=0,1, be the underlying probability of death for the beta-blocker and placebo group respectively, and let θi

We assume θi∼N(θ,σ2) and the focus of our inference is θ, the mean of individual θi. In particular, we compare H0:|θ|≤δ vs. H1:|θ|>δ. Our hierarchical Bayesian model is specified as follows:

For τ=1.5δ and η0=1/2, we draw MCMC samples from the posterior of θ using Stan and estimate P(θ∈Θ1) and BF10 (Bayes Factor of H1 over H0) as in Lemma 1. The results are given in Table 3 for three different values of effect size δ. Note that here the Bayes factor shows strong support for H1 over H0 for δ=0.1 whereas it shows a weak support of H1 for δ=0.2. When δ is increased to 0.3, however, Bayes factor shows relatively strong support of H0 over H1.

Stan and R code for Examples 1 and 2 are available at https://sites.google.com/site/jiangangliao.

In Summary, this papers establishes a formal connection between ROPE and Bayes factor for comparing interval hypotheses. This connection leads to better understanding of ROPE and provides a simple method to compute Bayes factor using MCMC draws from the posterior distribution.