Given a graph G=(V, E), a connected cut δ (U) is the set of edges of E linking all vertices of U to all vertices of V U such that the induced subgraphs G[U] and G[V U] are connected. Given a positive weight function w defined on E, the connected maximum cut problem (CMAX CUT) is to find a connected cut Ω such that w(Ω) is maximum among all connected cuts. CMAX CUT is NP-hard even for planar graphs. In this paper, we prove that CMAX CUT is polynomial for graphs without K_5 e as a minor. We deduce a quadratic time algorithm for the minimum cut problem in the same class of graphs without computing the maximum flow. 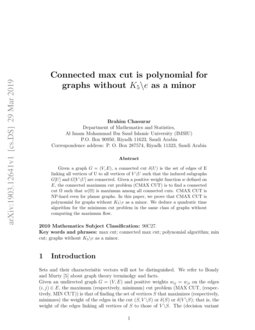 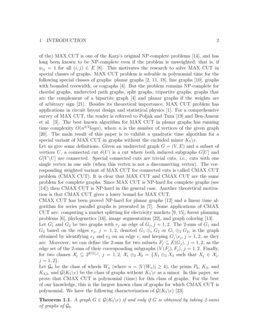 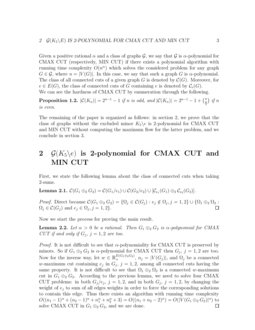 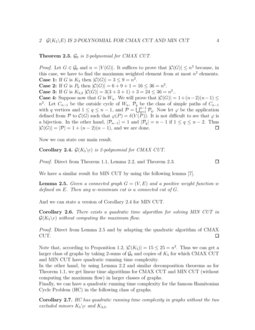 We refer to Bondy and Murty [5] about graph theory terminolgy and facts. Given an undirected graph G=(V,E) and positive weights wij=wji on the edges (i,j)∈E, the maximum (respectively, minimum) cut problem (MAX CUT, (respectively, MIN CUT)) is that of finding the set of vertices S that maximizes (respectively, minimzes) the weight of the edges in the cut (S,V∖S) or δ(S) or δ(V∖S); that is, the weight of the edges linking all vertices of S to those of V∖S. The (decision variant of the) MAX CUT is one of the Karp’s original NP-complete problems [14], and has long been known to be NP-complete even if the problem is unweighted; that is, if wij=1 for all (i,j)∈E [8]. This motivates the research to solve MAX CUT in special classes of graphs. MAX CUT problem is solvable in polynomial time for the following special classes of graphs: planar graphs [2, 11, 18], line graphs [10], graphs with bounded treewidth, or cographs [4]. But the problem remains NP-complete for chordal graphs, undirected path graphs, split graphs, tripartite graphs, graphs that are the complement of a bipartite graph [4] and planar graphs if the weights are of arbitrary sign [21]. Besides its theoretical importance, MAX CUT problem has applications in circuit layout design and statistical physics [1]. For a comprehensive survey of MAX CUT, the reader is referred to Poljak and Tuza [19] and Ben-Ameur et al. [3]. The best known algorithm for MAX CUT in planar graphs has running time complexity O(n3/2logn), where n is the number of vertices of the given graph [20]. The main result of this paper is to exhibit a quadratic time algorithm for a special variant of MAX CUT in graphs without the excluded minor K5∖e. Let us give some definitions. Given an undirected graph G=(V,E) and a subset of vertices U, a connected cut δ(U) is a cut where both induced subgraphs G[U] and G[V∖U] are connected. Special connected cuts are trivial cuts, i.e., cuts with one single vertex in one side (when this vertex is not a disconnecting vertex). The corresponding weighted variant of MAX CUT for connected cuts is called connected maximum cut problem (CMAX CUT). It is clear that MAX CUT and CMAX CUT are the same problem for complete graphs. Since MAX CUT is NP-hard for complete graphs (see [14]) then CMAX CUT is also NP-hard in the general case. Another theoretical motivation is that CMAX CUT gives a lower bound for MAX CUT. CMAX CUT has been proved NP-hard for planar graphs [12] and a linear time algorithm for series parallel graphs is presented in [7]. Some applications of CMAX CUT are: computing a market splitting for electricity markets [9, 15], forest planning problems [6], phylogenetics [16], image segmentation [22], and graph coloring [13]. Let G1 and G2 be two graphs with vj a vertex (respectively, ej an edge) of Gj,j=1,2. The 1-sum (respectively, 2-sum) of G1 and G2 based on the vertices vj∈V(Gj) (respectively, edges ej∈E(Gj)), j=1,2, denoted G1⊕vG2 or G1⊕G2 (respectively, G1⊕eG2 or G1⊕2G2), is the graph obtained by identifying v1 and v2 (respectively, e1 and e2) on a new vertex v (respectively, edge e), and keeping Gj (respectively, Gj∖ej), j=1,2, as they are. Moreover, we can define the 2-sum for two subsets Fj⊆E(Gj), j=1,2, as the edge set of the 2-sum of their corresponding subgraphs (V(Fj),Fj), j=1,2. Finally, for two classes Xj⊆2E(Gj), j=1,2, X1⊕2X2={X1⊕2X2 such that Xj∈Xj, j=1,2}. Let G0 be the class of wheels Wn (where n=|V(Wn)|≥4), the prism P6, K3, and K3,3, and G(K5∖e) be the class of graphs without K5∖e as a minor. In this paper, we prove that CMAX CUT is polynomial (time) for this class of graphs. For the best of our knowledge, this is the largest known class of graphs for which CMAX CUT is polynomial. We have the following characterization of G(K5∖e) [23].

Given a positive rational α and a class of graphs G, we say that G is α-polynomial for CMAX CUT (respectively, MIN CUT) if there exists a polynomial algorithm with running time complexity O(nα) which solves the considered problem for any graph G∈G, where n=|V(G)|. In this case, we say that such a graph G is α-polynomial for the considered problem. The class of all connected cuts of a given graph G is denoted by C(G). Moreover, for e∈E(G), the class of connected cuts of G containing e is denoted by Ce(G). We can see the hardness of CMAX CUT by enumeration through the following.

The remaining of the paper is organized as follows: in section 2, we prove that the class of graphs without the excluded minor K5∖e is 2-polynomial for CMAX CUT and MIN CUT without computing the maximum flow for the latter problem, and we conclude in section 3.

First, we state the following lemma about the class of connected cuts when taking 2-sums.

Now we start the process for proving the main result.

G0 is 2-polynomial for CMAX CUT.

Now we can state our main result.

G(K5∖e) is 2-polynomial for CMAX CUT.

We have a similar result for MIN CUT by using the following lemma [7].

Given a connected graph G=(V,E) and a positive weight function w defined on E. Then any w-minimum cut is a connected cut of G.

And we can state a version of Corollary 2.4 for MIN CUT.

There exists a quadratic time algorithm for solving MIN CUT in G(K5∖e) without computing the maximum flow.

Direct from Lemma 2.5 and by adapting the quadratic algorithm of CMAX CUT. ∎

Note that, according to Proposition 1.2, |C(K5)|=15≤25=n2. Thus we can get a larger class of graphs by taking 2-sums of G0 and copies of K5 for which CMAX CUT and MIN CUT have quadratic running time complexity. In the other hand, by using Lemma 2.2 and similar decomposition theorems as for Theorem 1.1, we get linear time algorithms for CMAX CUT and MIN CUT (without computing the maximum flow) in large classes of graphs. Finally, we can have a quadratic running time complexity for the famous Hamitonian Cycle Problem (HC) in the following class of graphs.

HC has quadratic running time complexity in graphs without the two excluded minors K5∖e and K3,3.

Since the considered class of graphs is a subclass of both planar graphs and G(K5∖e), then deciding if a given graph G from this class contains a Hamiltonian cycle is equivalent to decide if a connected maximum cardinality cut (i.e., CMAX CUT with weights w(e)=1 for any edge e) of the dual graph G∗ has cardinality n=|V(G)|. ∎

This result is interesting because HC is NP-complete in maximal planar graphs [17].