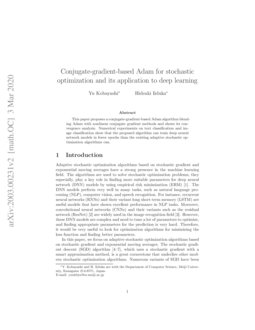 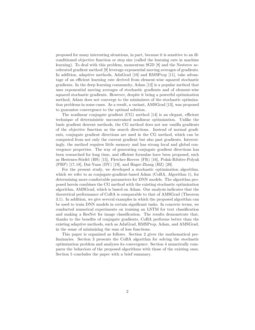 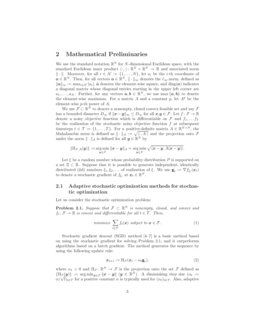 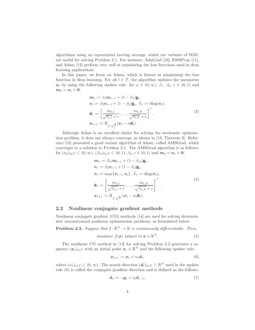 . The DNN models perform very well in many tasks, such as natural language processing (NLP), computer vision, and speech recognition. For instance, recurrent neural networks (RNNs) and their variant long short-term memory (LSTM) are useful models that have shown excellent performance in NLP tasks. Moreover, convolutional neural networks (CNNs) and their variants such as the residual network (ResNet)

[2] are widely used in the image recognition field [3]

. However, these DNN models are complex and need to tune a lot of parameters to optimize, and finding appropriate parameters for the prediction is very hard. Therefore, it would be very useful to look for optimization algorithms for minimizing the loss function and finding better parameters.

[4, 5, 6, 7], which uses a stochastic gradient with a smart approximation method, is a great cornerstone that underlies other modern stochastic optimization algorithms. Numerous variants of SGD have been proposed for many interesting situations, in part, because it is sensitive to an ill-conditioned objective function or step size (called the learning rate in machine learning). To deal with this problem, momentum SGD [8] and the Nesterov accelerated gradient method [9] leverage exponential moving averages of gradients. In addition, adaptive methods, AdaGrad [10]

The nonlinear conjugate gradient (CG) method [14] is an elegant, efficient technique of deterministic unconstrained nonlinear optimization. Unlike the basic gradient descent methods, the CG method does not use vanilla gradients of the objective function as the search directions. Instead of normal gradients, conjugate gradient directions are used in the CG method, which can be computed from not only the current gradient but also past gradients. Interestingly, the method requires little memory and has strong local and global convergence properties. The way of generating conjugate gradient directions has been researched for long time, and efficient formulae have been proposed, such as Hestenes-Stiefel (HS) [15], Fletcher-Reeves (FR) [16], Polak-Ribière-Polyak (PRP) [17, 18], Dai-Yuan (DY) [19], and Hager-Zhang (HZ) [20].

For the present study, we developed a stochastic optimization algorithm, which we refer to as conjugate-gradient-based Adam (CoBA, Algorithm 1), for determining more comfortable parameters for DNN models. The algorithm proposed herein combines the CG method with the existing stochastic optimization algorithm, AMSGrad, which is based on Adam. Our analysis indicates that the theoretical performance of CoBA is comparable to that of AMSGrad (Theorem 3.1). In addition, we give several examples in which the proposed algorithm can be used to train DNN models in certain significant tasks. In concrete terms, we conducted numerical experiments on training an LSTM for text classification and making a ResNet for image classification. The results demonstrate that, thanks to the benefits of conjugate gradients, CoBA performs better than the existing adaptive methods, such as AdaGrad, RMSProp, Adam, and AMSGrad, in the sense of minimizing the sum of loss functions.

This paper is organized as follows. Section 2 gives the mathematical preliminaries. Section 3 presents the CoBA algorithm for solving the stochastic optimization problem and analyzes its convergence. Section 4 numerically compares the behaviors of the proposed algorithms with those of the existing ones. Section 5 concludes the paper with a brief summary.

We use the standard notation RN for N-dimensional Euclidean space, with the standard Euclidean inner product ⟨⋅,⋅⟩:RN×RN→R and associated norm ∥⋅∥. Moreover, for all i∈N:={1,…,N}, let ai be the i-th coordinate of a∈RN

. Then, for all vectors

We use F⊂RN to denote a nonempty, closed convex feasible set and say F has a bounded diameter D∞ if ∥x−y∥∞≤D∞ for all x,y∈F. Let f:F→R denote a noisy objective function which is differentiable on F and f1,…fT be the realization of the stochastic noisy objective function f at subsequent timesteps t∈T:={1,…,T}. For a positive-definite matrix A∈RN×N, the Mahalanobis norm is defined as ∥⋅∥A:=√⟨⋅,A⋅⟩ and the projection onto F under the norm ∥⋅∥A is defined for all y∈RN by

be a random number whose probability distribution

P is supported on a set Ξ⊂R. Suppose that it is possible to generate independent, identically distributed (iid) numbers ξ1,ξ2,… of realization of ξ. We use gt:=∇fξt(xt) to denote a stochastic gradient of fξt at xt∈RN.

Suppose that F⊂RN is nonempty, closed, and convex and ft:F→R is convex and differentiable for all t∈T. Then,

where αt>0 and ΠF:RN→F is the projection onto the set F defined as {ΠF(y)}:=argminx∈F∥x−y∥ (y∈RN). A diminishing step size (αt:=α/√t)t∈T for a positive constant α is typically used for (αt)t∈T. Also, adaptive algorithms using an exponential moving average, which are variants of SGD, are useful for solving Problem 2.1. For instance, AdaGrad [10], RMSProp [11], and Adam [12] perform very well at minimizing the loss functions used in deep learning applications.

In this paper, we focus on Adam, which is fastest at minimizing the loss function in deep learning. For all t∈T, the algorithm updates the parameter xt by using the following update rule: for α∈(0,∞), β1, β2, ϵ∈(0,1) and m0=v0=0,

Although Adam is an excellent choice for solving the stochastic optimization problem, it does not always converge, as shown in [13, Theorem 3]. Reference [13] presented a good variant algorithm of Adam, called AMSGrad, which converges to a solution to Problem 2.1. The AMSGrad algorithm is as follows: for (αt)t∈T⊂(0,∞), (β1t)t∈T⊂(0,1), β2, ϵ∈(0,1) and m0=v0=0,

Suppose that f:RN→R is continuously differentiable. Then,

The nonlinear CG method in [14] for solving Problem 2.2 generates a sequence (xt)t∈T with an initial point x1∈RN and the following update rule:

where (αt)t∈T⊂(0,∞). The search direction (dt)t∈T⊂RN used in the update rule (6) is called the conjugate gradient direction and is defined as the follows:

where gt:=∇f(xt) and d0=0. Here, we use γt to denote the conjugate gradient update parameter, which can be computed from the gradient values gt and gt−1. The parameter γt has been researched for many years because its value has a large effect on the nonlinear objective function f. For instance, the following parameters proposed by Hestenes-Stiefel (HS) γHSt [15], Fletcher-Reeves (FR) γFRt [16], Polak-Ribière-Polyak (PRP) γPRPt [17, 18], and Dai-Yuan (DY) γDYt [19] are widely used to solve Problem 2.2:

In addition, Hager-Zhang γHZt [20] is an improvement on γHSt defined by (8) that works well on Problem 2.2. The parameter γHZt is computed as follows:

Furthermore, we give a convergence analysis of the proposed algorithm. The proof is given in Appendix A.

This section presents the results of experiments evaluating our algorithms and comparing them with the existing algorithms.

Our experiments were conducted on a fast scalar computation server111https://www.meiji.ac.jp/isys/hpc/ia.html

We used the proposed algorithms to learn a long short-term memory (LSTM) for text classification. The LSTM is an artificial recurrent neural network (RNN) architecture used in the field of deep learning for natural language processing, time-series analysis, etc.

This experiment used the IMDb dataset222https://datasets.imdbws.com/ for text classification tasks. The dataset contains 50,000 movie reviews along with their associated binary sentiment polarity labels. The dataset is split into 25,000 training and 25,000 test sets.

We trained a multilayer neural network for solving the text classification problem on the IMDb dataset. We used an LSTM with an affine layer and a sigmoid function as an activation function for the output. For training it, we used the binary cross entropy (BCE) as a loss function minimized by the existing and proposed algorithms. The BCE loss

L:RT×RT→R is defined as follows:

Let us numerically compare the performances of the proposed algorithms with Adam, AMSGrad, RMSProp, and AdaGrad. In this experiment, we used a random vector as the initial parameter x1 and αt=α:=10−2, for all t∈T, as the step size parameter of all algorithms. The previously reported results (see [21, 22]) on convex optimization algorithms empirically used αt:=10−2 and αt:=10−3. We used the default values provided in torch.optim333https://pytorch.org/docs/stable/optim.html as the hyper parameter settings of the optimization algorithms and set β1:=0.9 and β2:=0.999 in Adam, AMSGrad, and CoBA. We set λ:=2, M:=10−4, and a:=1+10−5 in CoBA.

The results of the experiment are reported in Figures 1–4. Figure 1 shows the behaviors of the algorithms for the loss function values defined by (13) with respect to the number of epochs, while Figure 2 shows those with respect to elapsed time [s]. Figure 3 presents the accuracy scores of the classification on the training data with respect to the number of epochs, whereas Figure 4 plots the accuracy score versus elapsed time [s]. We can see that the CoBA algorithms perform better than Adam, AdaGrad, and RMSProp in terms of both the training loss and accuracy score. In particular, Figures 1 and 2 show that CoBA using γHZ reduces the loss function values in fewer epochs and shorter elapsed time than AMSGrad. Figure 3 and 4 indicate that CoBA using γHZ reaches 100% accuracy faster than AMSGrad.

We performed numerical comparisons using Residual Network (ResNet) [2], a relatively deep model based on a convolutional neural network (CNN), on an image classification task. Rather than having only convolutional layers, ResNet has additional shortcut connections, e.g., identity mappings, between pairs of 3×3 filters. The architecture can relieve the degradation problem wherein accuracy saturates when a deeper neural network starts converging. As a result, ResNet is considered to be a practical architecture for image recognition on some datasets. In this experiment, we used the CIFAR10 dataset [23], a benchmark for image classification. The dataset consists of 60,000 color images (32×32) in 10 classes, with 6,000 images per class. There are 50,000 training images and 10,000 test images. The test batch contained exactly 1,000 randomly selected images from each class.

We trained a 34-layer ResNet (ResNet-34) organized into a 7×7 convolutional layer, 32 convolutional layers which have 3×3 filters, and a 1,000-way-fully-connected layer with a softmax function. We used the cross entropy as the loss function for fitting ResNet in accordance with the common strategy in image classification. In the case of classification to the K-class, the cross entropy L:RT×K×RT×K→R torch.nn.CrossEntropyLoss444https://pytorch.org/docs/stable/nn.html is defined as follows:

We can see that the CoBA algorithms perform better than Adam, AdaGrad, and RMSProp in terms of both the train loss and accuracy score. In particular, Figures 5 and 7 show that CoBA using γHS, γFR, γPRP, γDY, or γHZ reduces the loss function values and reaches an accuracy score of 100% in fewer epochs than AMSGrad. Figure 6 shows that CoBA and AMSGrad converge faster than the other algorithms. Although CoBA it takes more time than AMSGrad does to update the parameters of ResNet, they theoretically take about the same amount of time for computing the conjugate gradient direction [24]. Figures 7 and 8 indicate that CoBA using γPRP reaches 100% accuracy faster than AMSGrad.

We presented the conjugate-gradient-based Adam (CoBA) algorithm for solving stochastic optimization problems that minimize the empirical risk in fitting of deep neural networks and showed its convergence. We numerically compared CoBA with an existing learning method in a text classification task using the IMDb dataset and an image classification task using the CIFAR-10 dataset. The results demonstrated its optimality and efficiency. In particular, compared with the existing methods, CoBA reduced the loss function value in fewer epochs on both datasets. In addition, it classification score reached a 100% accuracy in fewer epochs compared with the existing methods.

Appendix A Proof of Theorem3.1

To begin with, we prove the following lemma with the boundedness of the conjugate gradient direction dt (t∈T).

We will use mathematical induction. The fact that Mta|γt|→0 (t→∞) ensures that there exists t0∈N such that, for all t≥t0,

which, together with (15), implies that

Next, we show the following lemma:

where the second inequality comes from the definition of ^vT,i, which is ^vT,i=max{^vT−1,i,vT,i}, the third one follows from αT:=α/√T and the update rules of mT,i and vT,i in Algorithm 1 for i∈N, and the fourth one comes from β1j≤β1 for all j∈T. Here, from the Cauchy-Schwarz inequality and the fact that ¯β1j≤βT−j1≤1 for all j∈T, we have

From the Cauchy-Schwarz inequality,

Let x⋆∈argminx∈Ff(x) and t∈T be fixed arbitrarily. From the update rule of Algorithm 1, we have

which, together with ∥x−y∥2=∥x∥2+∥y∥2+2⟨x,y⟩ (x,y∈RN) and the definitions of mt and dt, implies that