Recently Transformer and Convolution neural network (CNN) based models have shown promising results in Automatic Speech Recognition (ASR), outperforming Recurrent neural networks (RNNs). Transformer models are good at capturing content-based global interactions, while CNNs exploit local features effectively. In this work, we achieve the best of both worlds by studying how to combine convolution neural networks and transformers to model both local and global dependencies of an audio sequence in a parameter-efficient way. To this regard, we propose the convolution-augmented transformer for speech recognition, named Conformer. Conformer significantly outperforms the previous Transformer and CNN based models achieving state-of-the-art accuracies. On the widely used LibriSpeech benchmark, our model achieves WER of 2.1 using a language model and 1.9 test/testother. We also observe competitive performance of 2.7 small model of only 10M parameters. 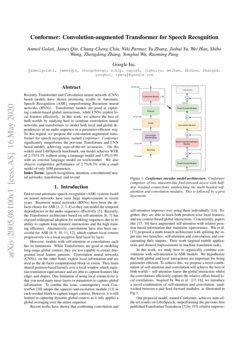 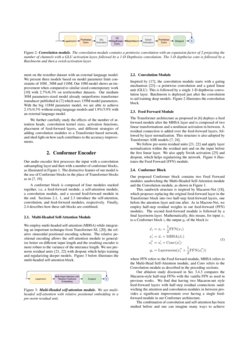 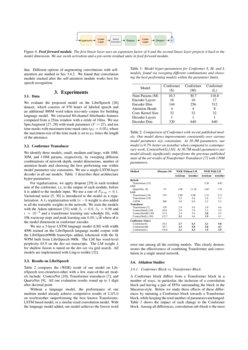 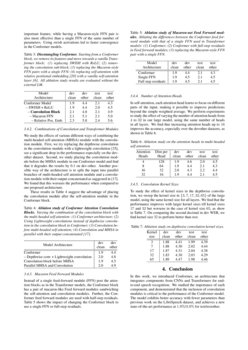 A Study of All-Convolutional Encoders for Connectionist Temporal Classification

A Battle of Network Structures: An Empirical Study of CNN, Transformer, and MLP

This work aims to explore a convolution-free base classifier that can be...
Mingchuan Tian, et al. ∙

End-to-end automatic speech recognition (ASR) systems based on neural networks have seen large improvements in recent years. Recurrent neural networks (RNNs) have been the de-facto choice for ASR [chiu2018state, rao2017exploring, Ryan19, tara2020] as they can model the temporal dependencies in the audio sequences effectively [graves2012sequence]. Recently, the Transformer architecture based on self-attention [vaswani2017attention, zhang2020transformer] has enjoyed widespread adoption for modeling sequences due to its ability to capture long distance interactions and the high training efficiency. Alternatively, convolutions have also been successful for ASR [li2019jasper, kriman2019quartznet, han2020contextnet, sainath2013deep, abdel2014convolutional], which capture local context progressively via a local receptive field layer by layer.

However, models with self-attention or convolutions each has its limitations. While Transformers are good at modeling long-range global context, they are less capable to extract fine-grained local feature patterns. Convolution neural networks (CNNs), on the other hand, exploit local information and are used as the de-facto computational block in vision. They learn shared position-based kernels over a local window which maintain translation equivariance and are able to capture features like edges and shapes. One limitation of using local connectivity is that you need many more layers or parameters to capture global information. To combat this issue, contemporary work ContextNet [han2020contextnet] adopts the squeeze-and-excitation module [hu2018squeeze] in each residual block to capture longer context. However, it is still limited in capturing dynamic global context as it only applies a global averaging over the entire sequence.

Recent works have shown that combining convolution and self-attention improves over using them individually [bello2019attention]. Together, they are able to learn both position-wise local features, and use content-based global interactions. Concurrently, papers like [yang2019convolutional, yu2018qanet] have augmented self-attention with relative position based information that maintains equivariance. Wu et al. [wu2020lite] proposed a multi-branch architecture with splitting the input into two branches: self-attention and convolution; and concatenating their outputs. Their work targeted mobile applications and showed improvements in machine translation tasks.

Our proposed model, named Conformer, achieves state-of-the-art results on LibriSpeech, outperforming the previous best published Transformer Transducer [zhang2020transformer] by 15% relative improvement on the testother dataset with an external language model. We present three models based on model parameter limit constraints of 10M , 30M and 118M. Our 10M model shows an improvement when compared to similar sized contemporary work [han2020contextnet] with 2.7%/6.3% on test/testother datasets. Our medium 30M parameters-sized model already outperforms transformer transducer published in [zhang2020transformer] which uses 139M model parameters. With the big 118M parameter model, we are able to achieve 2.1%/4.3% without using language models and 1.9%/3.9% with an external language model.

We further carefully study the effects of the number of attention heads, convolution kernel sizes, activation functions, placement of feed-forward layers, and different strategies of adding convolution modules to a Transformer-based network, and shed light on how each contributes to the accuracy improvements.

Our audio encoder first processes the input with a convolution subsampling layer and then with a number of conformer blocks, as illustrated in Figure 1. The distinctive feature of our model is the use of Conformer blocks in the place of Transformer blocks as in [zhang2020transformer, karita2019comparative].

The Transformer architecture as proposed in [vaswani2017attention]

deploys a feed forward module after the MHSA layer and is composed of two linear transformations and a nonlinear activation in between. A residual connection is added over the feed-forward layers, followed by layer normalization. This structure is also adopted by Transformer ASR models

We follow pre-norm residual units [wang-etal-2019-learning-deep, nguyen2019transformers] and apply layer normalization within the residual unit and on the input before the first linear layer. We also apply Swish activation [ramachandran2017searching] and dropout, which helps regularizing the network. Figure 4 illustrates the Feed Forward (FFN) module.

This sandwich structure is inspired by Macaron-Net [lu2019understanding], which proposes replacing the original feed-forward layer in the Transformer block into two half-step feed-forward layers, one before the attention layer and one after. As in Macron-Net, we employ half-step residual weights in our feed-forward (FFN) modules. The second feed-forward module is followed by a final layernorm layer. Mathematically, this means, for input xi to a Conformer block i, the output yi of the block is:

Our ablation study discussed in Sec 3.4.3 compares the Macaron-style half-step FFNs with the vanilla FFN as used in previous works. We find that having two Macaron-net style feed-forward layers with half-step residual connections sandwiching the attention and convolution modules in between provides a significant improvement over having a single feed-forward module in our Conformer architecture.

dataset, which consists of 970 hours of labeled speech and an additional 800M word token text-only corpus for building language model. We extracted 80-channel filterbanks features computed from a 25ms window with a stride of 10ms. We use SpecAugment

[park2019specaugment, largespecaugment] with mask parameter (F=27), and ten time masks with maximum time-mask ratio (pS=0.05), where the maximum-size of the time mask is set to pS times the length of the utterance.

We identify three models, small, medium and large, with 10M, 30M, and 118M params, respectively, by sweeping different combinations of network depth, model dimensions, number of attention heads and choosing the best performing one within model parameter size constraints. We use a single-LSTM-layer decoder in all our models. Table  1 describes their architecture hyper-parameters.

For regularization, we apply dropout [JMLR:v15:srivastava14a] in each residual unit of the conformer, i.e, to the output of each module, before it is added to the module input. We use a rate of Pdrop=0.1. Variational noise [graves2012sequence, jim1996analysis] is introduced to the model as a regularization. A ℓ2 regularization with 1e−6 weight is also added to all the trainable weights in the network. We train the models with the Adam optimizer [kingma2014adam] with β1=0.9, β2=0.98 and ϵ=10−9 and a transformer learning rate schedule [vaswani2017attention], with 10k warm-up steps and peak learning rate 0.05/√d where d is the model dimension in conformer encoder.

Table 2 compares the (WER) result of our model on LibriSpeech test-clean/test-other with a few state-of-the-art models include: ContextNet [han2020contextnet], Transformer transducer [zhang2020transformer], and QuartzNet [kriman2019quartznet]. All our evaluation results round up to 1 digit after decimal point.

Without a language model, the performance of our medium model already achieve competitive results of 2.3/5.0 on test/testother outperforming the best known Transformer, LSTM based model, or a similar sized convolution model. With the language model added, our model achieves the lowest word error rate among all the existing models. This clearly demonstrates the effectiveness of combining Transformer and convolution in a single neural network.

A Conformer block differs from a Transformer block in a number of ways, in particular, the inclusion of a convolution block and having a pair of FFNs surrounding the block in the Macaron-style. Below we study these effects of these differences by mutating a Conformer block towards a Transformer block, while keeping the total number of parameters unchanged. Table 3 shows the impact of each change to the Conformer block. Among all differences, convolution sub-block is the most important feature, while having a Macaron-style FFN pair is also more effective than a single FFN of the same number of parameters. Using swish activations led to faster convergence in the Conformer models.

3.4.2 Combinations of Convolution and Transformer Modules

These results in Table 4 suggest the advantage of placing the convolution module after the self-attention module in the Conformer block.

In self-attention, each attention head learns to focus on different parts of the input, making it possible to improve predictions beyond the simple weighted average. We perform experiments to study the effect of varying the number of attention heads from 4 to 32 in our large model, using the same number of heads in all layers. We find that increasing attention heads up to 16 improves the accuracy, especially over the devother datasets, as shown in Table 6.

To study the effect of kernel sizes in the depthwise convolution, we sweep the kernel size in {3,7,17,32,65} of the large model, using the same kernel size for all layers. We find that the performance improves with larger kernel sizes till kernel sizes 17 and 32 but worsens in the case of kernel size 65, as show in Table 7. On comparing the second decimal in dev WER, we find kernel size 32 to perform better than rest.

In this work, we introduced Conformer, an architecture that integrates components from CNNs and Transformers for end-to-end speech recognition. We studied the importance of each component, and demonstrated that the inclusion of convolution modules is critical to the performance of the Conformer model. The model exhibits better accuracy with fewer parameters than previous work on the LibriSpeech dataset, and achieves a new state-of-the-art performance at 1.9%/3.9% for test/testother.