Transformer-based end-to-end speech recognition models have received considerable attention in recent years due to their high training speed and ability to model a long-range global context. Position embedding in the transformer architecture is indispensable because it provides supervision for dependency modeling between elements at different positions in the input sequence. To make use of the time order of the input sequence, many works inject some information about the relative or absolute position of the element into the input sequence. In this work, we investigate various position embedding methods in the convolution-augmented transformer (conformer) and adopt a novel implementation named rotary position embedding (RoPE). RoPE encodes absolute positional information into the input sequence by a rotation matrix, and then naturally incorporates explicit relative position information into a self-attention module. To evaluate the effectiveness of the RoPE method, we conducted experiments on AISHELL-1 and LibriSpeech corpora. Results show that the conformer enhanced with RoPE achieves superior performance in the speech recognition task. Specifically, our model achieves a relative word error rate reduction of 8.70 test-other sets of the LibriSpeech corpus respectively. 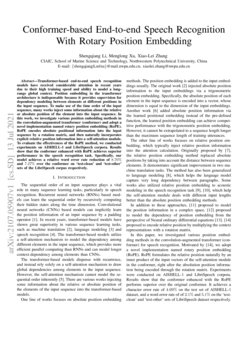 The sequential order of an input sequence plays a vital role in many sequence learning tasks, particularly in speech recognition. Recurrent neural networks (RNNs) based models can learn the sequential order by recursively computing their hidden states along the time dimension. Convolutional neural networks (CNNs) based models can implicitly learn the position information of an input sequence by a padding operator

[10]. In recent years, transformer-based models have shown great superiority in various sequence learning tasks, such as machine translation [24], language modeling [18] and speech recognition [5]. The transformer-based models utilize a self-attention mechanism to model the dependency among different elements in the input sequence, which provides more efficient parallel computing than RNNs and can model longer context-dependency among elements than CNNs.

The transformer-based models dispense with recurrence, and instead rely solely on a self-attention mechanism to draw global dependencies among elements in the input sequence. However, the self-attention mechanism cannot model the sequential order inherently [27]. There are various works injecting some information about the relative or absolute position of the elements of the input sequence into the transformer-based models.

In addition to these approaches, [25] proposed to model the position information in a complex space. [13]

[2]. [21] proposed to encode relative position by multiplying the context representations with a rotation matrix.

In this paper, we investigated various position embedding methods in the convolution-augmented transformer (conformer) for speech recognition. Motivated by [21], we adopt a novel implementation named rotary position embedding (RoPE). RoPE formulates the relative position naturally by an inner product of the input vectors of the self-attention module in the conformer, right after the absolution position information being encoded through the rotation matrix. Experiments were conducted on AISHELL-1 and LibriSpeech corpora. Results show that the conformer enhanced with the RoPE performs superior over the original conformer. It achieves a character error rate of 4.69% on the test set of AISHELL-1 dataset, and a word error rate of of 2.1% and 5.1%

The remainder of this paper is organized as follows. Section 3 describes the RoPE method and the architecture of our model. Section 4 presents experiments. Conclusion is given in Section 5.

where qm,kn,vn incorporate m-th and n-th position information via the function fq(⋅),fk(⋅),fv(⋅) respectively. The attention weights calculated using the query and key vectors, and the output is the weighted sum of the value vector:

Assuming that xm∈Rd is the m-th element in the input sequence. The implementation of absolute position embedding can be formulated as:

where Wq,Wk,Wv∈Rd×dm is the weight matrix of the linear projection layer of query, key and value vectors respectively, dm is the hidden size of the attention module, pm∈Rd is a vector depending of the position information of xm. In [11, 3], pm∈{pj}Tj=1 is a set of trainable vectors. Ref. [24] has proposed to generate pm using the sinusoidal function:

where m is the position and j is the dimension.

In [4], the relative distance between elements in the input sequence was taken into account. Specifically, keeping the form of (3), the term qmk⊤n can be decomposed to:

where u,v are trainable parameters, and Rm−n is the relative position embedding. Comparing the (6) and (5), we can see that there are three main changes:

In this section, we describe the rotary position embedding (RoPE) and illustrate how we apply it to the self-attention module in transformer-based models.

where the inner product of qm and kn is formulated by a function g(⋅), which takes only xm, xn and their relative position m−n as input variables. Actually, finding such an encoding mechanism is equivalent to solving the function fq(⋅) and fk(⋅) that conform (7).

We start with a simple case with dimension d=2, the RoPE provides a solution to (7):

Considering the merit of the linearity of the inner product, we can generalize the solution to any dimension when d is even, we divide the d-dimension space to d/2 sub-spaces and combine them:

The illustration of rotary position embedding is shown in Figure 1.

In this work, we adopt conformer [8] as the speech recognition model, which is a state-of-the-art transformer-based model. The architecture of the conformer is given in Figure 2. The audio encoder of conformer first processed the input with a convolution subsampling module and then with E conformer encoder blocks. Each conformer encoder block contains two feed-forward (FFN) modules sandwiching the multi-head self-attention (MHSA) module and the convolution (Conv) module, as shown in Figure 3. Because the decoder of conformer is identical with transformer [24], we will not describe the decoder anymore.

We used 80-channel log-mel filterbank coefficients (Fbank) features computed on a 25ms window with a 10ms shift. The features for each speaker were rescaled to have zero mean and unit variance. The token vocabulary of AISHELL-1 contains 4231 characters. We used a 5000 token vocabulary based on the byte pair encoding algorithm

Our model contains 12 encoder blocks and 6 decoder blocks. There are 4 heads in both the self-attention and the encoder-decoder attention. The 2D-CNN frontend utilizes two 3×3

Table 1 lists the comparison result on LibriSpeech dataset. From the table, we can see that the proposed conformer enhanced with RoPE achieves the best performance among these methods. Our model achieves a WER of 2.1% and 5.1% on the on ‘test-clean’ and ‘test-other’ sets respectively, which gets a relative WER reduction of 8.70% and 7.27% over the conformer.

Table 2 lists the comparison result on AISHELL-1 dataset. From the table, we see that the proposed model achieves a CER of 4.34% on the development set and 4.69% on the test set respectively, which gets a relative CER reduction of 4.00% and 3.90% on the development set and test set over the conformer. Moreover, the proposed model significantly outperforms the other comparison methods.