We continue study of conformal testing in binary model situations. In this note we consider Markov alternatives to the null hypothesis of exchangeability. We propose two new classes of conformal test martingales; one class is statistically efficient in our experiments, and the other class partially sacrifices statistical efficiency to gain computational efficiency. 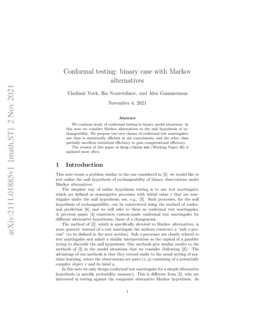 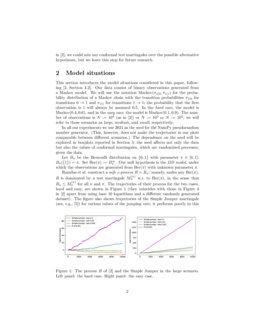 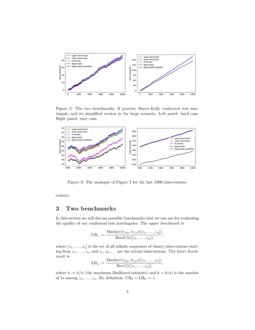 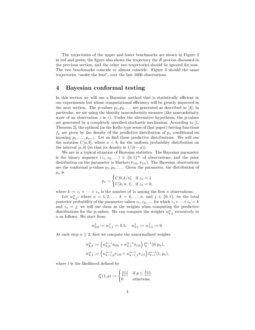 Testing the Number of Regimes in Markov Regime Switching Models

Conformal testing is a way of testing the IID assumption based on confor...
Vladimir Vovk, et al. ∙

Although the assumption of elliptical symmetry is quite common in multiv...
Sladana Babic, et al. ∙

We consider the problem of testing, on the basis of a p-variate Gaussian...
Davy Paindaveine, et al. ∙

We show that for local alternatives which are not square integrable the ...
Tadeusz Inglot, et al. ∙

How can one test if a binary sequence is exchangeable? Fork-convex hulls, supermartingales, and Snell envelopes

This note treats a problem similar to the one considered in [2]: we would like to test online the null hypothesis of exchangeability of binary observations under Markov alternatives.

The method of [2], which is specifically devoted to Markov alternatives, is more general: instead of a test martingale the authors construct a “safe e-process” (to be defined in the next section). Safe e-processes are closely related to test martingales and admit a similar interpretation as the capital of a gambler trying to discredit the null hypothesis. Our methods give similar results to the methods of [2] in the model situations that we consider (following [2]

). The advantage of our methods is that they extend easily to the usual setting of machine learning, where the observations are pairs

(x,y) consisting of a potentially complex object x and its label y.

In this note we only design conformal test martingales for a simple alternative hypothesis (a specific probability measure). This is different from

[2], who are interested in testing against the composite alternative Markov hypothesis. As in [2], we could mix our conformal test martingales over the possible alternative hypotheses, but we leave this step for future research.

This section introduces the model situations considered in this paper, following [2, Section 4.2]

. Our data consist of binary observations generated from a Markov model. We will use the notation

In all our experiments we use 2021 as the seed for the NumPy pseudorandom number generator. (This, however, does not make the trajectories in our plots comparable between different scenarios.) The dependence on the seed will be explored in boxplots reported in Section 5; the seed affects not only the data but also the values of conformal martingales, which are randomized processes, given the data.

be the Bernoulli distribution on

Ramdas et al. construct a safe e-process R=Rn: namely, under any Ber(π), R is dominated by a test martingale M(π)n w.r. to Ber(π), in the sense that Rn≤M(π)n for all n and π. The trajectories of their process for the two cases, hard and easy, are shown in Figure 1 (they coincides with those in Figure 4 in [2] apart from using base 10 logarithms and a different randomly generated dataset). The figure also shows trajectories of the Simple Jumper martingale (see, e.g., [5]) for various values of the jumping rate; it performs poorly in this context.

In this section we will discuss possible benchmarks that we can use for evaluating the quality of our conformal test martingales. The upper benchmark is

where [z1,…,zn] is the set of all infinite sequences of binary observations starting from z1,…,zn, and z1,z2,… are the actual observations. The lower benchmark is

(the maximum likelihood estimate) and

The trajectories of the upper and lower benchmarks are shown in Figure 2 in red and green; the figure also shows the trajectory the R process discussed in the previous section, and the other two trajectories should be ignored for now. The two benchmarks coincide or almost coincide. Figure 3 should the same trajectories “under the lens”, over the last 1000 observations.

In this section we will use a Bayesian method that is statistically efficient in our experiments but whose computational efficiency will be greatly improved in the next section. The p-values p1,p2,… are generated as described in [4]; in particular, we are using the identity nonconformity measure (the nonconformity score of an observation z is z). Under the alternative hypothesis, the p-values are generated by a completely specified stochastic mechanism. According to [1, Theorem 2], the optimal (in the Kelly-type sense of that paper) betting functions fn are given by the density of the predictive distribution of pn conditional on knowing p1,…,pn−1. Let us find these predictive distributions. We will use the notation U[a,b], where a<b, for the uniform probability distribution on the interval [a,b] (so that its density is 1/(b−a)).

We are in a typical situation of Bayesian statistics. The Bayesian parameter is the binary sequence

where k:=z1+⋯+zn is the number of 1s among the first n observations.

, be the total posterior probability of the parameter values

z1,z2,… for which z1+⋯+zn=k and zn=j; we will use them as the weights when computing the predictive distributions for the p-values. We can compute the weights wnk,j recursively in n as follows. We start from

At each step n≥2, first we compute the unnormalized weights

where l is the likelihood defined by

and then we normalize them:

Given the posterior weights for the previous step, we can find the predictive distribution for pn as

where we use the shorthand π0|j:=1−π1|j. Therefore, the betting functions for the resulting Bayes–Kelly conformal test martingale are

For experimental results, see Figure 4, in addition to Figure 2. The Bayes–Kelly conformal test martingale appears to be very close to the two benchmarks. Its simplified version is described in the next section. The relatively poor performance of the R-process in the left panel of Figure 4 should not be interpreted as it being inferior to the Bayes–Kelly conformal test martingale: remember that R works against all Markov alternatives, whereas the other processes in Figures 2–8 are adapted to the specific alternative hypothesis (Markov(0.4,0.6) in the hard case and Markov(0.1,0.9) in the easy case).

In this section we consider a radical simplification of the Bayes–Kelly conformal test martingale (1). We still assume that the Markov chain is symmetric, as in our model situations. If we assume that the weights wnk,j, k=0,…,n, are concentrated at

Figure 5 shows the weights (averaged over j∈{0,1}) for the last step of the Bayes–Kelly conformal test martingale in the medium scenario (103 observations). They are indeed concentrated around values of k not so different from 0.5N=500.

As a second step, we make (2) straightforward to compute by setting

(If k(n−1):=z1+⋯+zn−1≈(n−1)/2, then j=zn−1 with high probability.) The performance of the simplified version is shown in Figures 2–4 and 6. It is usually worse than that of the Bayes–Kelly conformal test martingale and the two benchmarks, but is comparable on the log scale apart from the right panel of Figure 6.

The right panel of Figure 6 and Figures 7 and 8 show that the statistical performance of the simplified Bayes–Kelly martingale particularly suffers in the easy case. The notches in the boxplots in Figures 7 and 8

indicate confidence intervals for the median.