Conversational and task-oriented dialogue systems aim to interact with the user using natural responses through multi-modal interfaces, such as text or speech. These desired responses are in the form of full-length natural answers generated over facts retrieved from a knowledge source. While the task of generating natural answers to questions from an answer span has been widely studied, there has been little research on natural sentence generation over spoken content. We propose a novel system to generate full length natural language answers from spoken questions and factoid answers. The spoken sequence is compactly represented as a confusion network extracted from a pre-trained Automatic Speech Recognizer. This is the first attempt towards generating full-length natural answers from a graph input(confusion network) to the best of our knowledge. We release a large-scale dataset of 259,788 samples of spoken questions, their factoid answers and corresponding full-length textual answers. Following our proposed approach, we achieve comparable performance with best ASR hypothesis. 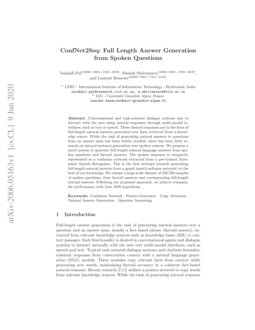 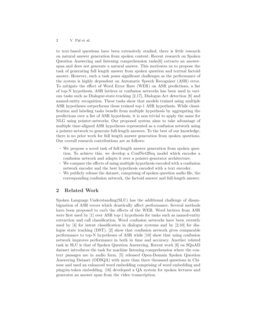 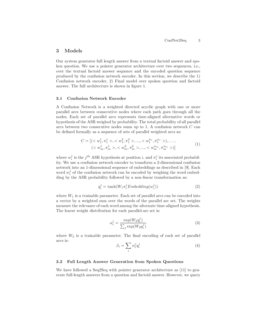 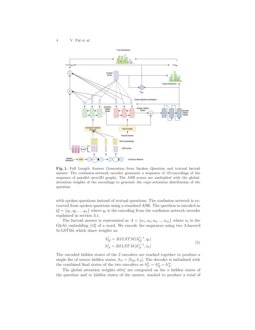 Full-length answer generation is the task of generating natural answers over a question and an answer span, usually a fact-based phrase (factoid answer), extracted from relevant knowledge sources such as knowledge-bases (KB) or context passages. Such functionality is desired in conversational agents and dialogue systems to interact naturally with the user over multi-modal interfaces, such as speech and text. Typical task-oriented dialogue systems and chatbots formulate coherent responses from conversation context with a natural language generation (NLG) module. These modules copy relevant facts from context while generating new words, maintaining factual accuracy in a coherent fact-based natural response. Recent research

[Liu-et-al:0018ijcai, pal-etal-2019-answering] utilizes a pointer-network to copy words from relevant knowledge sources. While the task of generating natural response to text-based questions have been extensively studied, there is little research on natural answer generation from spoken content. Recent research on Spoken Question Answering and listening comprehension tasks[DBLP:journals/corr/abs-1804-00320] extracts an answer-span and does not generate a natural answer. This motivates us to propose the task of generating full length answer from spoken question and textual factoid answer. However, such a task poses significant challenges as the performance of the system is highly dependent on Automatic Speech Recognizer (ASR) error. To mitigate the effect of Word Error Rate (WER) on ASR predictions, a list of top-N hypothesis, ASR lattices or confusion networks has been used in various tasks such as Dialogue-state-tracking [DBLP:journals/corr/JagfeldV17, zhong2018global], Dialogue-Act detection [8462030]

and named-entity recognition. These tasks show that models trained using multiple ASR hypotheses outperforms those trained top-1 ASR hypothesis. While classification and labeling tasks benefit from multiple hypothesis by aggregating the predictions over a list of ASR hypothesis, it is non-trivial to apply the same for NLG using pointer-networks. Our proposed system aims to take advantage of multiple time-aligned ASR hypotheses represented as a confusion network using a pointer-network to generate full-length answers. To the best of our knowledge, there is no prior work for full length answer generation from spoken questions. Our overall research contributions are as follows:

Spoken Language Understanding(SLU) has the additional challenge of disambiguation of ASR errors which drastically affect performance. Several methods have been proposed to curb the effects of the WER. Word lattices from ASR were first used by [DBLP:journals/csl/Hakkani-TurBRT06] over ASR top-1 hypothesis for tasks such as named-entity extraction and call classification. Word confusion networks have been recently used by [Ladhak2016LatticeRnnRN] for intent classification in dialogue systems and by [DBLP:journals/corr/JagfeldV17, pal2020modeling] for dialogue state tracking (DST). [DBLP:journals/corr/JagfeldV17] show that confusion network gives comparable performance to top-N hypotheses of ASR while [pal2020modeling] show that using confusion network improves performance in both in time and accuracy. Another related task in SLU is that of Spoken Question Answering. Recent work [DBLP:journals/corr/abs-1804-00320] on SQuAD dataset introduces the task for machine listening comprehension where the context passages are in audio form. [DBLP:journals/corr/abs-1808-02280] released Open-Domain Spoken Question Answering Dataset (ODSQA) with more than three thousand questions in Chinese and used an enhanced word embedding comprising of word embedding and pingyin-token embedding. [unlu-inproceedings] developed a QA system for spoken lectures and generates an answer span from the video transcription.

C can be defined formally as a sequence of sets of parallel weighted arcs as:

of the confusion network can be encoded by weighing the word embedding by the ASR probability followed by a non-linear transformation as:

is a trainable parameter. Each set of parallel arcs can be encoded into a vector by a weighted sum over the words of the parallel arc set. The weights measure the relevance of each word among the alternate time-aligned hypothesis. The learnt weight distribution for each parallel-arc set is:

where W2 is a trainable parameter. The final encoding of each set of parallel arcs is:

We have followed a Seq2Seq with pointer generator architecture as [pal-etal-2019-answering] to generate full-length answers from a question and factoid answer. However, we query with spoken questions instead of textual questions. The confusion network is extracted from spoken questions using a standard ASR. The question is encoded as Q={q1,q2,...,qn} where qt is the encoding from the confusion network encoder explained in section 3.1.

The factoid answer is represented as A={a1,a2,a3,...,am} where at is the GloVe embedding [Pennington14glove:global] of a word. We encode the sequences using two 3-layered bi-LSTMs which share weights as:

where battn, v, Wh, Ws are learnable parameters. The copy mechanism for summarization introduced in [DBLP:journals/corr/SeeLM17] takes advantage of a word distribution over an extended vocabulary comprising of source words and vocabulary words. The probability of copying a word w from a text sequence is ∑mk:wk=wattntk

The probability of copying a word from the answer is:

where Pgen is a soft switch for the decoder to generate words or copy words from the source. Pvocab(w) is the probability of generating a word from the vocabulary. These parameters are computed as described in [DBLP:journals/corr/SeeLM17].

To generate data for our task, we use 258,478 samples from the full-length answer generation dataset introduced in [pal-etal-2019-answering] where each sample consists of a question, factoid answer and full-length answer. The samples in the dataset were chosen from SQuAD and HarvestingQA. Each sample in our dataset is also a 3-tuple (q,f,a) in which q is a spoken-form question, f is a text-form factoid answer and a is the text-form full-length natural answer. 256,478 samples were randomly selected as the training set, 1000 as the development set and 1000 as the test set. We also extracted 470 samples from NewsQA dataset and 840 samples from Freebase to evaluate our system on cross-domain datasets.111Code and dataset at: https://github.com/kolk/ConfnetPointerGenBaseline

We used Google text-to-speech to generate the spoken utterances of the questions. Google Voice en-US-Standard-B was used to generate 239,746 spoken questions in male voice and Google Voice en-US-Wavenet-C was used to generate 16,730 spoken questions in female voice. All samples are in US accented English. The ASR lattice was extracted using Kaldi ASR [Povey_ASRU2011] and converted to a confusion network for compact representation using SRILM[Stolcke02srilm--]. We used the pre-trained ASpIRE Chain Model which has been trained on Fisher English to transcribe the spoken question and extract the ASR lattices. The training dataset has a WER of 22.94% and test set has a WER of 37.57% on the best hypothesis of the ASR, while the cross-dataset evaluation test sets- NewsQA has a WER of 34.60% and Freebase has a WER of 43.80%.

We built our system over OpenNMT-Py[opennmt]. We used a batch size of 32, dropout rate of 0.5, RNN size of 512 and decay steps 10000. The maximum number of parallel arcs in the confusion network and maximum sentence length are set to 20 and 50 respectively. The confusion network contains noise and interjections such as *DELETE* and [noise], [laughter], uh, oh which leads to degradation in system performance. To mitigate the effect of such noise, we remove the whole set of parallel arcs if all the arcs are noise and interjection words. As shown in table 1, the pruned confusion network, named clean confnet, outperforms the system marginally for the SQuAD/HarvestingQA dataset. We also compare the system with a model trained on the best hypothesis of the extracted from the ASR lattice using Kaldi. Here, the confusion network encoder is replaced with a text encoder which shares weights with the factoid answer encoder.

An example of results on a SQuAD/HarvestingQA test sample is as follows: