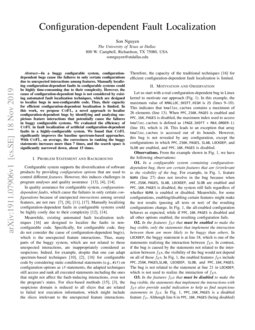 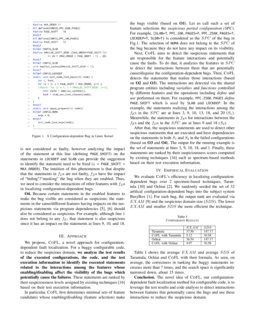 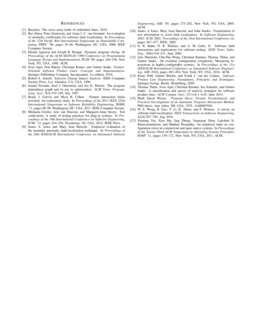 Software fault localization is one of the most expensive, tedious, and t...
Kien-Tuan Ngo, et al. ∙

Software fault localization is one of the most expensive, tedious, and t...
Thu-Trang Nguyen, et al. ∙

How to Debug Inclusivity Bugs? A Debugging Process with Information Architecture

Impact of Limpware on HDFS: A Probabilistic Estimation

With the advent of cloud computing, thousands of machines are connected ...
Thanh Do, et al. ∙

I Problem Statement and Background

Configurable system supports the diversification of software products by providing configuration options that are used to control different features. However, this induces challenges in program analyses and quality assurance  [productlinesbook1, productlinesbook2, productline_survey].

Meanwhile, existing automated fault localization techniques [wong2009survey] are designed to localize the faults in non-configurable code. Specifically, for configurable code, they do not consider the cause of configuration-dependent bug(s), which is the unexpected feature interactions. Thus, many parts of the buggy system, which are not related to those unexpected interactions, are inappropriately considered as suspicious. Indeed, for example, despite that one can adapt spectrum-based techniques [tarantula, ochiai, wong2009survey] for configurable code by considering static conditional statements (e.g., #if) on configuration options as if-statements, the adapted techniques still access and rank all executed statements including the ones that might not affect the fault-inducing interactions, even not the program’s states. For slice-based methods [static_slice, dynamic_slice], the suspicious domain is reduced to all slices that are related to failed test execution information, which might include the slices irrelevant to the unexpected feature interactions. Therefore, the capacity of the traditional techniques [wong2009survey] for efficient configuration-dependent fault localization is limited.

Let us start with a real configuration-dependent bug in Linux kernel to motivate our approach (Fig. 1). In this example, the maximum value of KMALLOC_SHIFT_HIGH is 25 (lines 9–10). This indicates that kmalloc_caches contains a maximum of 26 elements (line 13). When PPC_256K_PAGES is enabled and PPC_16K_PAGES is disabled, the maximum index used to access kmalloc_caches is defined as (PAGE_SHIFT + MAX_ORDER-1) (line 18), which is 28. This leads to an exception that array kmalloc_caches is accessed out of its bounds. However, this bug is not revealed by any configuration, except the configurations in which PPC_256K_PAGES, SLAB, LOCKDEP, and SLOB are enabled, and PPC_16K_PAGES is disabled.

Observations. From the example shown in Fig. 1, we have the following observations:

O1. In a configurable system containing configuration-dependent bug, there are certain features that are (ir)relevant to the visibility of the bug. For example, in Fig. 1, feature NUMA (line 27) does not involve in the bug because when PPC_256K_PAGES, SLAB, LOCKDEP, and SLOB are enabled and PPC_16K_PAGES is disabled, the system still fails regardless of whether NUMA is enabled or disabled. Meanwhile, for some configurations, enabling/disabling certain features might make the test results (passing all tests or not) of the resulting configurations change. In Fig. 1, the all-enabled configuration behaves as expected, while if PPC_16K_PAGES is disabled and all other options enabled, the resulting configuration fails.

O3. In the features fDs that must be disabled to make the bug visible, the statements that implement the interactions with fEs also provide useful indication to help us find suspicious statements in fEs. In Fig. 1, PPC_16K_PAGES is a disabled feature fD. Although line 6 in PPC_16K_PAGES (being disabled) is not considered as faulty, however analyzing the impact of the statement at this line (defining PAGE_SHIFT) on the statements in LOCKDEP and SLAB can provide the suggestion to identify the statement need to be fixed (i < PAGE_SHIFT + MAX_ORDER). The intuition of this phenomenon is that despite that the statements in fDs are not faulty, fDs have the impact of “hiding”/“masking” the bug when they are enabled. Thus, we need to consider the interactions of other features with fDs in localizing configuration-dependent bugs.

We propose, CoFL, a novel approach for configuration-dependent fault localization. For a buggy configurable code, to reduce the suspicious domain, we analyze the test results of the executed configurations, the code, and the test execution information to identify the executed statements related to the interactions among the features whose enabling/disabling affect the visibility of the bugs which potentially cause the failures. These statements are ranked by their suspiciousness levels assigned by existing techniques [wong2009survey] based on their test execution information.

O1). Let us call such a set of feature selections the suspicious partial configuration (SPC). For example, {SLAB=T, PPC_16K_PAGES=F, PPC_256K_PAGES=T, LOCKDEP=T, SLOB=T} is considered as the SPC of the bug in Fig.1. The selection of NUMA does not belong to the SPC of the bug because they do not have any impact on its visibility.

We evaluate CoFL’s efficiency in localizing configuration-dependent bugs over 2 spectrum-based techniques, Tarantula [tarantula] and Ochiai [ochiai]. We randomly seeded the set of 32 artifical configuration-dependent bugs into the subject system BusyBox [busybox]. For each bug, the output rank are evaluated via EXAM [exam] and the suspicious domain size (SDS). The lower EXAM and smaller SDS the more efficient the technique.

Table I shows the average EXAM and average SDS of Tarantula, Ochiai and CoFL with their formula. As seen, on average, the correctness in ranking the buggy statements increases more than 7 times, and the search space is significantly narrowed down, about 15 times.

Conclusion. The novel idea of CoFL, our configuration-dependent fault localization method for configurable code, is to leverage the test results and code analysis to detect interactions between features that potentially cause the bugs and use these interactions to reduce the suspicious domain.