Conditioning of restricted Fourier matrices and super-resolution of MUSIC

This paper studies stable recovery of a collection of point sources from its noisy M+1 low-frequency Fourier coefficients. We focus on the super-resolution regime where the minimum separation of the point sources is below 1/M. We propose a separated clumps model where point sources are clustered in far apart sets, and prove an accurate lower bound of the Fourier matrix with nodes restricted to the source locations. This estimate gives rise to a theoretical analysis on the super-resolution limit of the MUSIC algorithm. 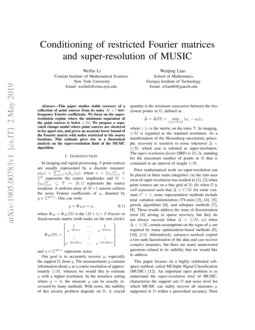 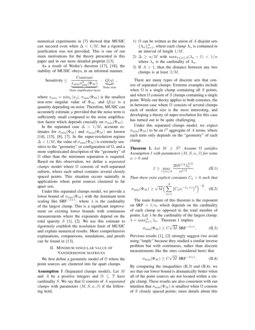 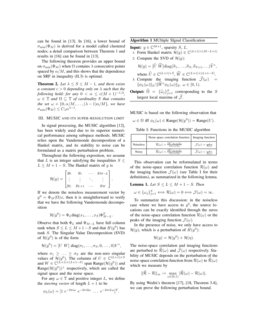 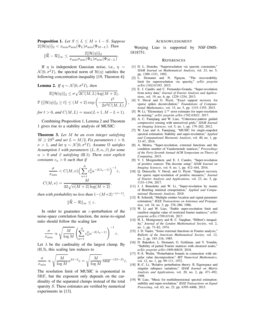 In imaging and signal processing, S point sources are usually represented by a discrete measure: μ(ω)=∑Sj=1xjδωj(ω), where x={xj}Sj=1∈CS represents the source amplitudes and Ω={ωj}Sj=1⊆T:=[0,1) represents the source locations. A uniform array of M+1 sensors collects the noisy Fourier coefficients of μ, denoted by y∈CM+1. One can write

where ΦM=ΦM(Ω) is the (M+1)×S Fourier or Vandermonde matrix (with nodes on the unit circle):

Our goal is to accurately recover μ, especially the support Ω, from y. The measurements y contains information about μ at a coarse resolution of approximately 1/M, whereas we would like to estimate μ with a higher resolution. In the noiseless setting where η=0, the measure μ can be exactly recovered by many methods. With noise, the stability of this inverse problem depends on Ω. A crucial quantity is the minimum separation between the two closest points in Ω, defined as

where |⋅|T is the metric on the torus T. In imaging, 1/M is regarded as the standard resolution. As a manifestation of the Heisenberg uncertainty principle, recovery is sensitive to noise whenever Δ<1/M, which case is referred as super-resolution. The super-resolution factor (SRF) is M/Δ, standing for the maximum number of points in Ω that is contained in an interval of length 1/M.

Prior mathematical work on super-resolution can be placed in three main categories: (a) the min-max error of super-resolution was studied in [1, 2] when point sources are on a fine grid of R; (b) when Ω is well-separated such that Δ≥C/M for some constant C>1, some representative methods include total variation minimization (TV-min) [3, 4, 5], greedy algorithms [6], and subspace methods [7, 8]. These results address the issue of discretization error [6] arising in sparse recovery, but they do not always succeed when Δ<1/M; (c) when Δ<1/M, certain assumptions on the signs of μ are required by many optimization-based methods [9, 10, 11]. Alternatively, subspace methods exploit a low-rank factorization of the data and can recover complex measures, but there are many unanswered questions related to its stability that we would like to address.

This paper focuses on a highly celebrated subspace method, called MUltiple SIgnal Classification (MUSIC) [12]. An important open problem is to understand the super-resolution limit of MUSIC: characterize the support sets Ω and noise level for which MUSIC can stably recover all measures μ supported in Ω within a prescribed accuracy. Prior numerical experiments in [7] showed that MUSIC can succeed even when Δ<1/M, but a rigorous justification was not provided. This is one of our main motivations for the theory presented in this paper and in our more detailed preprint [13].

As a result of Wedin’s theorem [17, 18], the stability of MUSIC obeys, in an informal manner,

is the smallest non-zero singular value of

ΦM, and Q(η) is a quantity depending on noise. Therefore, MUSIC can accurately estimate μ provided that the noise term is sufficiently small compared to the noise amplification factor which depends crucially on σmin(ΦM).

In the separated case Δ>1/M, accurate estimates for σmin(ΦM) and σmax(ΦM) are known [14, 15, 8, 7]. In the super-resolution regime Δ<1/M, the value of σmin(ΦM) is extremely sensitive to the “geometry” or configuration of Ω, and a more sophisticated description of the “geometry” of Ω other than the minimum separation is required. Based on this observation, we define a separated clumps model where Ω consists of well-separated subsets, where each subset contains several closely spaced points. This situation occurs naturally in applications where point sources clustered in far apart sets.

Under this separated clumps model, we provide a lower bound of σmin(ΦM) with the dominant term scaling like SRF−λ+1, where λ is the cardinality of the largest clump. This is a significant improvement on existing lower bounds with continuous measurements where the exponents depend on the total sparsity S [1, 2]. We use this estimate to rigorously establish the resolution limit of MUSIC and explain numerical results. More comprehensive explanations, comparisons, simulations, and proofs can be found in [13].

We first define a geometric model of Ω where the point sources are clustered into far apart clumps.

Let M and A be a positive integers and Ω⊆T have cardinality S. We say that Ω consists of A separated clumps with parameters (M,S,α,β) if the following hold.

There are many types of discrete sets that consist of separated clumps. Extreme examples include when Ω is a single clump containing all S points, and when Ω consists of S clumps containing a single point. While our theory applies to both extremes, the in-between case where Ω consists of several clumps each of modest size is the most interesting, and developing a theory of super-resolution for this case has turned out to be quite challenging.

Under this separated clumps model, we expect σmin(ΦM) to be an ℓ2 aggregate of A terms, where each term only depends on the “geometry” of each clump.

Let M≥S2. Assume Ω satisfies Assumption 1 with parameters (M,S,α,β) for some α>0 and

Then there exist explicit constants Ca>0 such that

Previous results [1, 2] strongly suggest (we avoid using “imply” because they studied a similar inverse problem but with continuous, rather than discrete measurements like the ones considered here) that

By comparing the inequalities (II.3) and (II.4), we see that our lower bound is dramatically better when all of the point sources are not located within a single clump. These results are also consistent with our intuition that σmin(ΦM) is smallest when Ω consists of S closely spaced points; more details about this can be found in [13]. In [16], a lower bound of σmin(ΦM) is derived for a model called clustered nodes; a detail comparison between Theorem 1 and results in [16] can be found in [13].

The following theorem provides an upper bound on σmin(ΦM) when Ω contains λ consecutive points spaced by α/M, and this shows that the dependence on SRF in inequality (II.3) is optimal.

Iii MUSIC and its super-resolution limit

In signal processing, the MUSIC algorithm [12], has been widely used due to its superior numerical performance among subspace methods. MUSIC relies upon the Vandermonde decomposition of a Hankel matrix, and its stability to noise can be formulated as a matrix perturbation problem.

Throughout the following exposition, we assume that L is an integer satisfying the inequalities S≤L≤M+1−S. The Hankel matrix of y is

If we denote the noiseless measurement vector by

y0=ΦM(Ω)x, then it is straightforward to verify that we have the following Vandermonde decomposition

. The Singular Value Decomposition (SVD) of

For any ω∈T and positive integer L, we define the steering vector of length L+1 to be

MUSIC is based on the following observation that

This observation can be reformulated in terms of the noise-space correlation function R(ω) and the imaging function J(ω) (see Table I for their definitions), as summarized in the following lemma.

To summarize this discussion: in the noiseless case where we have access to y0, the source locations can be exactly identified through the zeros of the noise-space correlation function R(ω) or the peaks of the imaging function J(ω).

In the presence of noise, we only have access to H(y), which is a perturbation of H(y0):

By using Wedin’s theorem [17, 18, Theorem 3.4], we can prove the following perturbation bound.

Combining Proposition 1, Lemma 2 and Theorem 1 gives rise to a stability analysis of MUSIC:

then with probability no less than

In order to guarantee an ε-perturbation of the noise-space correlation function, the noise-to-signal ratio should follow the scaling law

Let λ be the cardinality of the largest clump. By (II.3), this scaling law reduces to

The resolution limit of MUSIC is exponential in SRF, but the exponent only depends on the cardinality of the separated clumps instead of the total sparsity S. These estimates are verified by numerical experiments in [13].