In this paper, we propose a Conditioned Variational Autoencoder to improve state-of-the-art performances in top-N item recommendation. 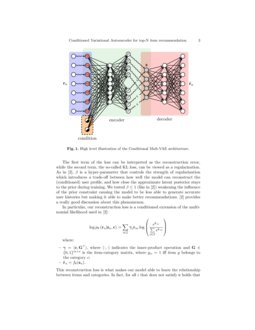 In this paper we propose an extension of the method proposed in [2]. These are the key points of our contribution:

In this section we provide some useful notation used throughout the paper. We refer to the set of users of a RS with U, where |U|=n. Similarly, the set of items is referred to as I such that |I|=m. The set of ratings is denoted by R≡{(u,i)∣u∈U∧i∈I,u % rated i}. Each item i is assumed to belong to a set of categories C(i)⊆C, where C≡{C1,C2,…,Cs} is the set of all possible categories s.t. |C|=s.

Moreover, since we face top-N recommendation tasks, we consider the binary rating matrix with R∈Rn×m where users are on the rows and items on the columns such that rui=1 iff (u,i)∈R. Given R, ru=[ru1,...,rum]⊤∈Nm

indicates the binary rating vector corresponding to the user

u. We add a subscription to both user and item sets to indicate, respectively, the set of items rated by a user u (i.e., Iu) and the set of users who rated the item i (i.e., Ui). Finally, given a user u we indicate with cu=[c1,...,cs] the binary condition vector related to the user u, where cj=1 if and only if ∃i∈Iu such that i belongs to the category Cj.

We propose an extension of the architecture proposed in [2]. We use a Conditioned Variational Autoencoder (C-VAE) where the architectures of the encoder and the decoder are symmetric. In Figure 1 we present our model. The input is composed of two parts: a user rating vector over the items of the dataset (i.e., ru), and a one-hot condition vector expressing the categories of the items that have to be privileged in the final ranking. Following [2], the user rating vector is L2-normalized and a dropout layer is applied. The entire input is then fed to a fully connected layer with tanh

as activation function and composed of 600 neurons. The encoder has two outputs that compose the latent space of the C-VAE. They are fully connected layers made of 200 neurons with a linear activation, in fact they represent the mean and the standard deviation of a Gaussian distribution. The input of the decoder is a latent vector

z that has to be sampled from the latent distribution. Since the sampling is not a differentiable operation the so-called reparameterization trick [1]

has to be performed to be able to backpropagate the gradient. So, to sample

The loss function we try to minimize is the negative conditioned β evidence lower bound (β-ELBO), where the conditioned β-ELBO is:

The first term of the loss can be interpreted as the reconstruction error, while the second term, the so-called KL loss, can be viewed as a regularization. As in [2], β is a hyper-parameter that controls the strength of regularization which introduces a trade-off between how well the model can reconstruct the (conditioned) user profile, and how close the approximate latent posterior stays to the prior during training. We tested β≤1 (like in [2]) weakening the influence of the prior constraint causing the model to be less able to generate accurate user histories but making it able to make better recommendations. [2] provides a really good discussion about this phenomenon.

In particular, our reconstruction loss is a conditioned extension of the multinomial likelihood used in [2]:

This reconstruction loss is what makes our model able to learn the relationship between items and categories. In fact, for all i that does not satisfy c holds that γi=0, thus it filters out the items of the user rating vector ru that do not belong the category selected by the condition. In this way only the output scores related to items belonging the selected category are taken into account to compute the gradient.

We have evaluated the performance of C-VAE and we highlight the following results:

A key requirement for the choice of the dataset was that it had to include side information for making conditions for our model, for example genres for movies or categories for businesses. Based on this requirement we chose three small- to medium-scale user-item consumption datasets from various domains:

: This dataset contains user-movie ratings collected from a movie recommendation service. Since we work on implicit feedback we binarized the explicit data. We decided to keep all the ratings due to the the small-scale of the dataset. We only kept users of have watched at least five movies and we took the genres of the movies as conditions.

MovieLens-20M (ML-20M): This dataset is a medium-scale version of the previous one. We binarized explicit data by keeping ratings of four or higher, like they did in [2]. We only kept users who have watched at least five movies and we took the genres of the movies as conditions.

Yelp dataset: This dataset is a subset of Yelp’s businesses, reviews, and user data. It was originally put together for the Yelp Dataset Challenge which is a chance for students to conduct research or analysis on Yelp’s data and share their discoveries. We decided to choice this dataset due to its sparsity. We wanted to see how our model was able to deal with very sparse data. Firstly, we kept ratings of the twenty most popular business categories to reduce sparsity, then we only kept users who have reviewed at least five businesses and businesses that have been reviewed by at least ten users. We took the categories of the businesses as conditions.

Table 1 summarizes the dimensions of all the datasets after this first preprocessing.

Since we use a Conditioned Variational Autoencoder, we needed to compute conditions for our examples. Due to the size of the datasets and to speed up the training of our models we decided to build conditions with just one category (only one bit at one). This means that conditions with multiple categories are not taken into account.

To compute conditions for the user rating matrix, we took every user rating vector ru and we created x+1 conditions, where x is the number of categories of the items that the user u have rated. The last condition is an empty condition vector (vector made of zeros) and we decided to add that in such a way that our model is able to recommend movies even when no condition is fed to it. So, if a user has rated three items and these items belong to seven categories in total, then the rating vector of the user is replicated eight times and every replica is associated with a different condition that corresponds to a specific category and the last one is the empty condition vector.

Table 2 summarizes the dimensions of all the datasets after the computation of the conditions.

We used the same ranking-based metrics used in [2]

: recall@k and nDCG@k. For each user, both metrics compare the predicted rank of the held-out items with their true rank. For C-VAE we got the predicted rank by sorting the un-normalized multinomial probability that our model outputs.

We studied the performance of various models under strong generalization like they did in [2]. Following the procedure in [2] we split all users into training, validation and test sets. We trained our models using the entire rating history of the training users. To evaluate, we took part of the rating history from held-out (validation and test) users to learn the necessary user-level representations for the model and then computed metrics by looking at how well the model ranked the rest of the unseen rating history from the held-out users.

We used 80/20 proportions for MovieLens 1M and MovieLens 20M datasets, while we chose 50/50 proportions for the Yelp dataset. Due to its sparsity other split proportions lead to had examples with no ratings in the validation-test set, causing the metrics impossible to compute.

β using the procedure used in [2]. As a reminder these are the steps we have followed:

To perform this tuning we annealed the KL term linearly with the number of gradient updates reported in Table 3. The table includes the best values we found for the parameter β using the procedure explained above. We applied L2 normalization and dropout with 0.5 probability at the input layer (only to the rating part and not to the condition). We initialized the weights of our model with Xavier initialization and the biases with truncated normal initializer with 0.0 mean and 0.001 standard deviation. We trained our model using Adam optimizer with a learning rate equals to 10−3

, and without weight decay. We trained the model for 100 epochs on every dataset and we kept the model with the best validation nDCG and reported test set metrics with it. We used early stopping to stop the training if there has been no improvements on the validation metric for 10 epochs.

In this section, we quantitatively compare our proposed method with related work using three different evaluations:

Table 4, Table 5 and Table 6 report the results we have obtained with our method and Mult-VAE. Each metric is averaged across all test users. To compute the total and conditioned evaluations for Mult-VAE we have filtered the model output based on the category selected by the condition, so we kept only the scores related to items of the correct category.

From our results it is possible to observe that C-VAE obtains results that are similar to the filtered evaluation of Mult-VAE. This means that our method is able to learn the relationships between items and categories and how to recommend the best items that belong to a specific category selected by a user. We think that Mult-VAE performs better in total and conditioned evaluations because it is an accurate ranker in general, and by selecting only the scores that belong to a specific category from the output, we obtain an accurate ranking of the items of the selected category. We are confident that our method can converge to state-of-the-art results with more epochs of training. Regarding the normal evaluation, we think C-VAE is less accurate simply because there is a bias towards conditioned examples in the dataset, in fact our main goal is to obtain the best results in the conditioned evaluation. To better understand the dimension of this bias in Table 2 is possible to observe the number of conditioned and not conditioned examples in our datasets.

The results we have obtained in ML-1M show that the gap between our method and Mult-VAE decreases with the increase of the density of the dataset.

From the results we have obtained on the Yelp dataset is possible to see that our method brings no improvement when the items in the dataset belong to a restricted number of categories. In fact, due to the preprocessing we have performed on the dataset the majority of items belong to just one category.

3.4.1 Analysis of the produced ranking

In this paper we implemented a conditioned extension of VAE for top-N item recommendation. We discovered that our model is able to learn the relationships between items and categories, that is something new for generative methods applied to top-N recommendation. We compared our method with the state-of-the-art, that is Mult-VAE  [2], and we discovered it reaches state-of-the-art performances using a novel training procedure, that includes a new conditioned loss (conditioned β-ELBO).

Since we obtained promising results, our intent is to improve our model performances and explore its latent representation to try to explain its behaviour, in particular what the latent representation captures about the relationships between items and categories after training. In conclusion, we think that our method can be used for context-aware recommendation, where a context is fed to the model as condition.