In this paper we derive variability measures for the conditional probability distributions of a pair of random variables, and we study its application in the inference of causal-effect relationships. We also study the combination of the proposed measures with standard statistical measures in the the framework of the ChaLearn cause-effect pair challenge. The developed model obtains an AUC score of 0.82 on the final test database and ranked second in the challenge. 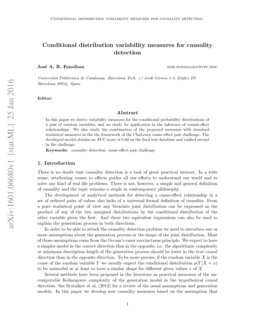 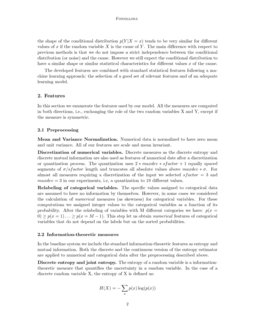 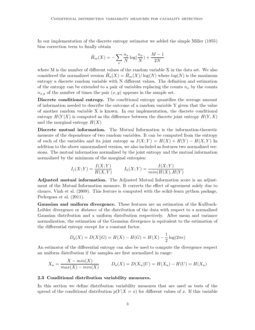 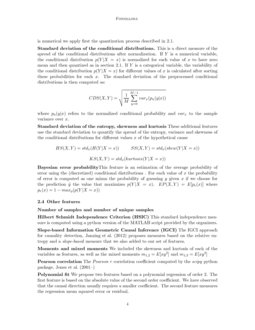 From dependency to causality: a machine learning approach

We conduct an axiomatic study of the problem of estimating the strength ...
Weihao Gao, et al. ∙

The purpose of this paper is to introduce a notion of causality in Marko...
Christel Baier, et al. ∙

From Causal Pairs to Causal Graphs

Generalized R^2 Measures for a Mixture of Bivariate Linear Dependences

There is no doubt that causality detection is a task of great practical interest. In a wide sense, attributing causes to effects guides all our efforts to understand our world and to solve any kind of real life problems. There is not, however, a simple and general definition of causality and the topic remains a staple in contemporary philosophy.

The development of analytical methods for detecting a cause-effect relationship in a set of ordered pairs of values also lacks of a universal formal definition of causality. From a pure statistical point of view any bivariate joint distribution can be expressed as the product of any of the two marginal distributions by the conditional distribution of the other variable given the first. And these two equivalent expressions can also be used to explain the generation process in both directions.

In order to be able to attack the causality detection problem we need to introduce one or more assumptions about the generation process or the shape of the joint distribution. Most of those assumptions come from the Occam’s razor succinctness principle. We expect to have a simpler model in the correct direction that in the opposite, i.e. the algorithmic complexity or minimum description length of the generation process should be lower in the true causal direction than in the opposite direction. To be more precise, if the random variable X is the cause of the random variable Y we usually expect the conditional distribution p(Y|X=x) to be unimodal or at least to have a similar shape for different given values x of X.

Several methods have been proposed in the literature as practical measures of the uncomputable Kolmogorov complexity of the generation model in the hypothetical causal direction. See Statnikov et al. (2012) for a review of the usual assumptions and generation models. In this paper we develop new causality measures based on the assumption that the shape of the conditional distribution p(Y|X=x) tends to be very similar for different values of x if the random variable X is the cause of Y. The main difference with respect to previous methods is that we do not impose a strict independence between the conditional distribution (or noise) and the cause. However we still expect the conditional distribution to have a similar shape or similar statistical characteristics for different values x of the cause.

The developed features are combined with standard statistical features following a machine learning approach: the selection of a good set of relevant features and of an adequate learning model.

In this section we enumerate the features used by our model. All the measures are computed in both directions, i.e., exchanging the role of the two random variables X and Y, except if the measure is symmetric.

Numerical data is normalized to have zero mean and unit variance. All of our features are scale and mean invariant.

Discretization of numerical variables. Discrete measures as the discrete entropy and discrete mutual information are also used as features of numerical date after a discretization or quantization process. The quantization uses 2∗maxdev∗sfactor+1 equally spaced segments of σ/sfactor length and truncates all absolute values above maxdev∗σ. For almost all measures requiring a discretization of the input we selected sfactor=3 and maxdev=3 in our experiments, i.e, a quantization to 19 different values. Relabeling of categorical variables. The specific values assigned to categorical data are assumed to have no information by themselves. However, in some cases we considered the calculation of numerical

p(x=0)≥p(x=1)…≥p(x=M−1). This step let us obtain numerical features of categorical variables that do not depend on the labels but on the sorted probabilities.

In the baseline system we include the standard information-theoretic features as entropy and mutual information. Both the discrete and the continuous version of the entropy estimator are applied to numerical and categorical data after the preprocessing described above.

where M is the number of different values of the random variable X in the data set. We also considered the normalized version ^Hn(X)=^Hm(X)/log(N) where log(N) is the maximum entropy a discrete random variable with N different values. The definition and estimation of the entropy can be extended to a pair of variables replacing the counts nx by the counts nx,y of the number of times the pair (x,y) appears in the sample set. Discrete conditional entropy. The conditional entropy quantifies the average amount of information needed to describe the outcome of a random variable Y given that the value of another random variable X is known. In our implementation, the discrete conditional entropy H(Y|X) is computed as the difference between the discrete joint entropy H(Y,X) and the marginal entropy H(X) Discrete mutual information. The Mutual Information is the information-theoretic measure of the dependence of two random variables. It can be computed from the entropy of each of the variables and its joint entropy as I(X;Y)=H(X)+H(Y)−H(X,Y) In addition to the above unnormalized version, we also included as features two normalized versions. The mutual information normalized by the joint entropy and the mutual information normalized by the minimum of the marginal entropies:

Adjusted mutual information. The Adjusted Mutual Information score is an adjustment of the Mutual Information measure. It corrects the effect of agreement solely due to chance, Vinh et al. (2009). This feature is computed with the scikit-learn python package, Pedregosa et al. (2011). Gaussian and uniform divergence.

These features are an estimation of the Kullback-Leibler divergence or

An estimator of the differential entropy can also be used to compute the divergence respect an uniform distribution if the samples are first normalized in range:

. The standard deviation of the preprocessed conditional distributions is then computed as:

where pn(y|x) refers to the normalized conditional probability and varx to the sample variance over x.

Standard deviation of the entropy, skewness and kurtosis

These additional features use the standard deviation to quantify the spread of the entropy, variance and skewness of the conditional distributions for different values x of the hypothetical cause

Number of samples and number of unique samples Hilbert Schmidt Independence Criterion (HSIC) This standard independence measure is computed using a python version of the MATLAB script provided by the organizers. Slope-based Information Geometric Causal Inference (IGCI) The IGCI approach for causality detection, Janzing et al. (2012) proposes measures based on the relative entropy and a slope-based measure that we also added to our set of features. Moments and mixed moments

We included the skewness and kurtosis of each of the variables as features, as well as the mixed moments

m1,2=E[xy2] and m1,3=E[xy3] Pearson correlation The Pearson r correlation coefficient computed by the scipy python package, Jones et al. (2001–) Polynomial fit We propose two features based on a polynomial regression of order 2. The first feature is based on the absolute value of the second order coefficient. We have observed that the causal direction usually requires a smaller coefficient. The second feature measures the regression mean squared error or residual.

, significantly performed better that the rest of algorithms in our 10-Fold cross-validation experiments on the training set after a manual hyperparameter tuning. We used the scikit-learn implementation (GradientBoostingClassifier) with 500 boosting stages and individual regression estimators with a large depth (9).

Note that the symmetry of the task allow us to duplicate the training sample pairs. Exchanging A with B in an example of class c provides a new example of the class −c.

To deal with this ternary classification problem we tested 3 different schemes:

Using the same set of selected features, the three schemes provide similar results as shown in Table 1. The proposed final model uses a equally weighted linear combination of the output of each of the three models to obtain an additional significant gain respect to the best performing scheme.

The main training database includes hundreds of pairs of real variables with known causal relationships from diverse domains. The organizers of the challenge also intermixed those pairs with controls (pairs of independent variables and pairs of variables that are dependent but not causally related) and semi-artificial cause-effect pairs (real variables mixed in various ways to produce a given outcome). In addition, they also provided training datasets artificially generated, 111http://www.causality.inf.ethz.ch/cause-effect.php?page=data.

A more detailed analysis of the results of the proposed system and of other top ranking systems can be found in Guyon (2014).

We have proposed several measures of the variability of conditional distributions as features to infer causal relationships in a given pair of variables. In particular, the proposed standard deviation of the normalized conditional distributions stands out as one of the best features in our results. The combination of the developed measures with standard information-theoretic and statistical measures provides a robust set of features to address the causality problem in the framework of the ChaLearn cause-effect pair challenge. In a test set with categorical, numerical and mixed pairs from diverse domains, the proposed method achieves an AUC score of 0.82.

This work has been supported in part by Spanish Ministerio de Economía y Competitividad, contract TEC2012-38939-C03-02 as well as from the European Regional Development Fund (ERDF/FEDER)

The complete python code for training the model and reproducing the presented results is available at https://github.com/jarfo/cause-effect. The training time is about 45 minutes on a 4-core server, and computing the predictions for the test test takes about 12 minutes.