In the area of claim-based reasoning in abstract argumentation, a claim-based semantics is said to be concurrent in a given framework if all its variants yield the same extensions. In this note, we show that the concurrence problem with respect to naive semantics is coNP-hard for well-formed CAFs. This solves a problem that has been left open in Dvorák et al. (2021). 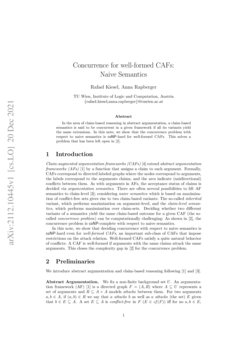 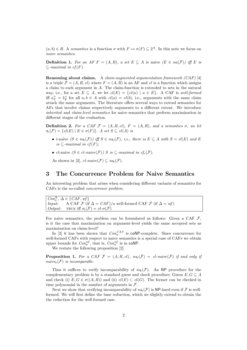 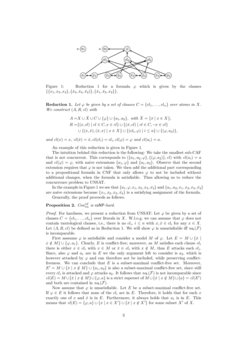 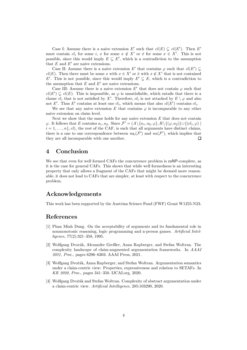 On the preferred extensions of argumentation frameworks: bijections with naive extensions

This paper deals with the problem of finding the preferred extensions of...
Mohammed Elaroussi, et al. ∙

A number of extensions to the classical notion of functional dependencie...
Parke Godfrey, et al. ∙

A Note on Generic Tangle Algorithms

This paper discusses the semantics of weighted argumentation graphs that...
Till Mossakowski, et al. ∙

In this paper, we first introduce a simulator of cases estimates of incu...
Benjamin Avanzi, et al. ∙

Claim-augmented argumentation frameworks (CAFs) [4] extend abstract argumentation frameworks (AFs) [1] by a function that assigns a claim to each argument. Formally, CAFs correspond to directed labeled graphs where the nodes correspond to arguments, the labels correspond to the arguments claims, and the arcs indicate (unidirectional) conflicts between them. As with arguments in AFs, the acceptance status of claims is decided via argumentation semantics. There are often several possibilities to lift AF semantics to claim-level [3]; considering naive semantics which is based on maximization of conflict-free sets gives rise to two claim-based variants: The so-called inherited variant, which performs maximization on argument-level, and the claim-level semantics, which performs maximization over claim-sets. Deciding whether two different variants of a semantics yield the same claim-based outcome for a given CAF (the so-called concurrence problem) can be computationally challenging: As shown in [2], the concurrence problem is \coNP-complete with respect to naive semantics.

In this note, we show that deciding concurrence with respect to naive semantics is \coNP-hard even for well-formed CAFs, an important sub-class of CAFs that impose restrictions on the attack relation. Well-formed CAFs satisfy a quite natural behavior of conflicts: A CAF is well-formed if arguments with the same claims attack the same arguments. This closes the complexity gap in [2] for the concurrence problem.

We introduce abstract argumentation and claim-based reasoning following [1] and [3].

We fix a non-finite background set U. An argumentation framework (AF) [1] is a directed graph F=(A,R) where A⊆U represents a set of arguments and R⊆A×A models attacks between them. For two arguments a,b∈A, if (a,b)∈R we say that a attacks b as well as a attacks (the set) E given that b∈E⊆A. A set E⊆A is conflict-free in F (E∈cf(F)) iff for no a,b∈E, (a,b)∈R. A semantics is a function σ with F↦σ(F)⊆2A. In this note we focus on naive semantics.

A claim-augmented argumentation framework (CAF) [4] is a triple F=(A,R,cl) where F=(A,R) is an AF and cl is a function which assigns a claim to each argument in A. The claim-function is extended to sets in the natural way, i.e., for a set E⊆A, we let cl(E)={cl(a)∣a∈E}. A CAF is well-formed iff a+F=b+F for all a,b∈A with cl(a)=cl(b), i.e., arguments with the same claim attack the same arguments. The literature offers several ways to extend semantics for AFs that involve claims respectively arguments to a different extent. We introduce inherited and claim-level semantics for naive semantics that perform maximization in different stages of the evaluation.

3 The Concurrence Problem for Naive Semantics

An interesting problem that arises when considering different variants of semantics for CAFs is the so-called concurrence problem.

For naive semantics, the problem can be formulated as follows: Given a CAF F, is it the case that maximization on argument-level yields the same accepted sets as maximization on claim-level?

In [2] it has been shown that ConCAFσ is \coNP-complete. Since concurrence for well-formed CAFs with respect to naive semantics is a special case of CAFs we obtain upper bounds for Conwfσ, that is, Conwfσ is in \coNP.

We restate the following proposition [2].

Thus it suffices to verify incomparability of nac(F). An \NP procedure for the complementary problem is by a standard guess and check procedure: Guess E,G⊆A and check (i) E,G∈σ((A,R)) and (ii) cl(E)⊂cl(G). The former can be checked in time polynomial in the number of arguments in F.

Next we show that verifying incomparability of nac(F) is \NP-hard even if F is well-formed. We will first define the base reduction, which we slightly extend to obtain the the reduction for the well-formed case.

An example of this reduction is given in Figure 1.

The intuition behind this reduction is the following: We take the smallest sub-CAF that is not concurrent. This corresponds to ({a1,a2,φ},{(φ,a2)},cl) with cl(ai)=a and cl(φ)=φ, with naive extensions {a1,φ} and {a1,a2}. Observe that the second extension requires that φ is not taken. We then add the additional part corresponding to a propositional formula in CNF that only allows φ to not be included without additional changes, when the formula is satisfiable. Thus allowing us to reduce the concurrence problem to UNSAT.

Generally, the proof proceeds as follows.

For hardness, we present a reduction from UNSAT: Let φ be given by a set of clauses C={cl1,…,cln} over literals in X. W.l.o.g. we can assume that φ does not contain tautological clauses, i.e., there is no cli, i≤n with x,¯x∈cli for any x∈X. Let (A,R,cl) be defined as in Reduction 1. We will show φ is unsatisfiable iff nac(F) is incomparable.

First asssume φ is satisfiable and consider a model M of φ. Let E=M∪{¯x∣x∉M}∪{φ,a1}. Clearly, E is conflict-free; moreover, as M satisfies each clause cli there is either x∈cli with x∈M or ¯x∈cli with x∉M, thus E attacks each cli. Since, also φ and a1 are in E we the only argument left to consider is a2, which is however attacked by φ and can therefore not be included, while preserving conflict-freeness. We can conclude that E is a subset-maximal conflict-free set. Moreover, E′=M∪{¯x∣x∉M}∪{a1,a2} is also a subset-maximal conflict-free set, since still every cli is attacked and φ attacks a2. It follows that nac(F) is not incomparable since cl(E)=M∪{¯x∣x∉M}∪{φ,a} is a strict superset of M∪{¯x∣x∉M}∪{a}=cl(E′) and both are contained in nac(F).

Now assume that φ is unsatisfiable. Let E be a subset-maximal conflict-free set. If φ∈E it follows that none of the cli are in E. Therefore, it holds that for each x exactly one of x and ¯x is in E. Furthermore, it always holds that a1 is in E. This means that cl(E)={φ,a}∪{x∣x∈X′}∪{¯x∣x∉X′} for some subset X′ of X.

Case I: Assume there is a naive extension E′ such that cl(E)⊊cl(E′). Then E′ must contain cli for some i, x for some x∉X′ or ¯x for some x∈X′. This is not possible, since this would imply E⊊E′, which is a contradiction to the assumption that E and E′ are naive extensions.

Case II: Assume there is a naive extension E′ that contains φ such that cl(E′)⊊cl(E). Then there must be some x with x∈X′ or ¯x with x∉X′ that is not contained E′. This is not possible, since this would imply E′⊊E, which is a contradiction to the assumption that E and E′ are naive extensions.

Case III: Assume there is a naive extension E′ that does not contain φ such that cl(E′)⊊cl(E). This is impossible, as φ is unsatisfiable, which entails that there is a clause cli that is not satisfied by X′. Therefore, cli is not attacked by E∖φ and also not E′. Thus E′ contains at least one cli, which means that also cl(E′) contains cli.

Next we show that the same holds for any naive extension E that does not contain φ. It follows that E contains a1,a2. Since F′=(A∖{a1,a2,φ},R∖{(φ,a2)}∪{(cli,φ)∣i=1,…,n},cl), the rest of the CAF, is such that all arguments have distinct claims, there is a one to one correspondence between nac(F′) and na(F′), which implies that they are all incomparable with one another. ∎

We see that even for well formed CAFs the concurrence problem is \coNP-complete, as it is the case for general CAFs. This shows that while well formedness is an interesting property that only allows a fragment of the CAFs that might be deemed more reasonable, it does not lead to CAFs that are simpler, at least with respect to the concurrence problem.

This work has been supported by the Austrian Science Fund (FWF) Grant W1255-N23.