Moulin (1981) has argued in favour of electing an alternative by giving each coalition the ability to veto a number of alternatives roughly proportional to the size of the coalition and considering the core of the resulting cooperative game. This core is guaranteed to be non-empty, and offers a large measure of protection for minorities (Kondratev and Nesterov, 2020). However, as is the norm for cooperative game theory the formulation of the concept involves considering all possible coalitions of voters, so the naive algorithm would run in exponential time, limiting the application of the rule to trivial cases only. In this work we present a polynomial time algorithm to compute the proportional veto core. 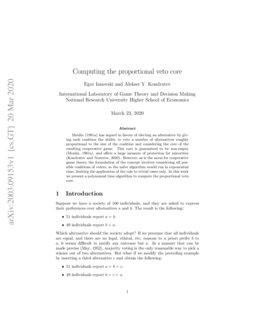 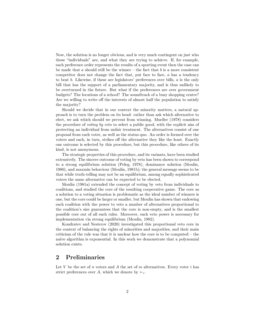 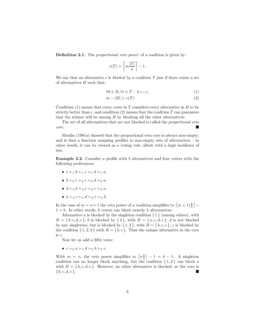 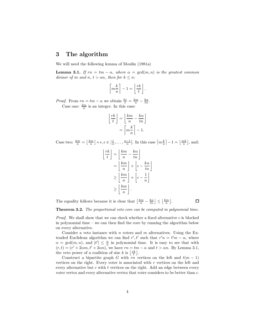 Suppose we have a society of 100 individuals, and they are asked to express their preferences over alternatives a and b. The result is the following:

Which alternative should the society adopt? If we presume that all individuals are equal, and there are no legal, ethical, etc, reasons to a priori prefer b to a, it seems difficult to justify any outcome but a. In a manner that can be made precise (May, 1952), majority voting is the only reasonable way to pick a winner out of two alternatives. But what if we modify the preceding example by inserting a third alternative c and obtain the following:

Now, the solution is no longer obvious, and is very much contingent on just who these “individuals” are, and what they are trying to achieve. If, for example, each preference order represents the results of a sporting event then the case can be made that a should still be the winner – the fact that b is a more consistent competitor does not change the fact that, put face to face, a has a tendency to beat b. Likewise, if these are legislators’ preferences over bills, a is the only bill that has the support of a parliamentary majority, and is thus unlikely to be overturned in the future. But what if the preferences are over government budgets? The locations of a school? The soundtrack of a busy shopping centre? Are we willing to write off the interests of almost half the population to satisfy the majority?

Should we decide that in our context the minority matters, a natural approach is to turn the problem on its head: rather than ask which alternative to elect, we ask which should we prevent from winning. Mueller (1978) considers the procedure of voting by veto to select a public good, with the explicit aim of protecting an individual from unfair treatment. The alternatives consist of one proposal from each voter, as well as the status quo. An order is formed over the voters and each, in turn, strikes off the alternative they like the least. Exactly one outcome is selected by this procedure, but this procedure, like others of its kind, is not anonymous.

The strategic properties of this procedure, and its variants, have been studied extensively. The sincere outcome of voting by veto has been shown to correspond to a strong equilibrium solution (Peleg, 1978), dominance solution (Moulin, 1980), and maxmin behaviour (Moulin, 1981b); the general message seems to be that while truth-telling may not be an equilibrium, among equally sophisticated voters the same alternative can be expected to be elected.

Moulin (1981a) extended the concept of voting by veto from individuals to coalitions, and studied the core of the resulting cooperative game. The core as a solution to a voting situation is problematic as the ideal number of winners is one, but the core could be larger or smaller, but Moulin has shown that endowing each coalition with the power to veto a number of alternatives proportional to the coalition’s size guarantees that the core is non-empty, and is the smallest possible core out of all such rules. Moreover, such veto power is necessary for implementation via strong equilibrium (Moulin, 1982).

Kondratev and Nesterov (2020) investigated this proportional veto core in the context of balancing the rights of minorities and majorities, and their main criticism of the rule was that it is unclear how the core is to be computed – the naïve algorithm is exponential. In this work we demonstrate that a polynomial solution exists.

Let V be the set of n voters and A the set of m alternatives. Every voter i has strict preferences over A, which we denote by ≻i.

The proportional veto power of a coalition is given by:

We say that an alternative c is blocked by a coalition T just if there exists a set of alternatives B such that:

Condition (1) means that every voter in T considers every alternative in B to be strictly better than c, and condition (2) means that the coalition T can guarantee that the winner will be among B by blocking all the other alternatives.

The set of all alternatives that are not blocked is called the proportional veto core.

Moulin (1981a) showed that the proportional veto core is always non-empty, and is thus a function mapping profiles to non-empty sets of alternatives – in other words, it can be viewed as a voting rule, albeit with a high incidence of ties.

Consider a profile with 5 alternatives and four voters with the following preferences:

In the case of m=n+1 the veto power of a coalition simplifies to ⌈(n+1)kn⌉−1=k. In other words, k voters can block exactly k alternatives.

With m=n, the veto power simplifies to ⌈nkn⌉−1=k−1. A singleton coalition can no longer block anything, but the coalition {1,2} can block a with B={b,c,d,e}. However, no other alternative is blocked, so the core is {b,c,d,e}.

We will need the following lemma of Moulin (1981a)

Case one: kmn is an integer. In this case:

The equality follows because it is clear that ⌊kmn−kαtn⌋≤⌊kmn⌋. ∎

The proportional veto core can be computed in polynomial time.

We shall show that we can check whether a fixed alternative c is blocked in polynomial time – we can then find the core by running the algorithm below on every alternative.

Consider a veto instance with n voters and m alternatives. Using the Extended Euclidean algorithm we can find r′,t′ such that r′n=t′m−α, where α=gcd(m,n), and |t′|≤nα in polynomial time. It is easy to see that with (r,t)=(r′+2αm,t′+2αn), we have rn=tm−α and t>αn. By Lemma 3.1, the veto power of a coalition of size k is ⌊rkt⌋.

We can find the maximum z=x+y for which there exists a complete bipartite subgraph Kx,y⊆G in polynomial time (Dawande et al., 2001)111See the discussion in the appendix.. We claim that c is blocked if and only if z≥tm.

Suppose that c is blocked by coalition T of size k. This means there exists a B, |B|=m−⌊rkt⌋, such that the voters in T strictly prefer everything in B to c. Observe that the vertices associated with T and B form a complete bipartite subgraph with rk+tm−t⌊rkt⌋ vertices. Since rkt≥⌊rkt⌋, it follows that rk≥t⌊rkt⌋ and the graph has at least tm vertices.

Now suppose there exists a complete bipartite subgraph Kx,y⊆G with x+y≥tm. Without loss of generality, we can assume x=rk′,y=tb′. That is, there are k′ voters who all agree that b′ alternatives are better than c. We must show that the coalition has enough veto power to force this outcome: ⌊rk′t⌋≥m−b′. We know that:

Since m−b′ is an integer it follows that ⌊rk′t⌋≥m−b′. ∎

The maximum vertex biclique problem is the following, and it can be solved in polynomial time:

The commonly cited argument for the polynomial-time solvability of the vertex maximum biclique problem harkens back to Garey and Johnson (1979), and runs along the lines of:

While this is clean and elegant, it is not entirely correct. In particular, if the graph contains a perfect matching then the maximum independent set is of size n, or one partition of a graph. The complement of this is not a biclique, unless we admit bicliques of the form Kn,0.

Let G be a bipartite graph with vertices L and R. Construct the following integer program:

The variables xw denote whether the vertex w is in the biclique. The objective function thus maximises the number of vertices, the first constraint forbids adding non-adjacent vertices to the biclique, and the last constraint ensures a vertex is either in or out of the biclique.

The following conditions are sufficient for a matrix A to be totally unimodular (Heller and Tompkins, 1956):

The rows of the constraint matrix consist of 1s and 0s (condition 2), and contain at most two 1s: for non-adjacent xu and xv (condition 1). If we partition the columns into the set L and the set R, then we will have a 1 for xu and a 1 for xv only if u∈L and v∈R (condition 3).