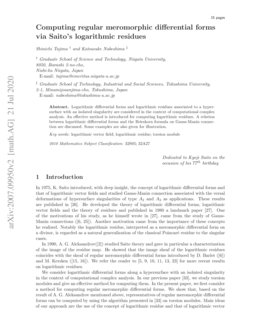 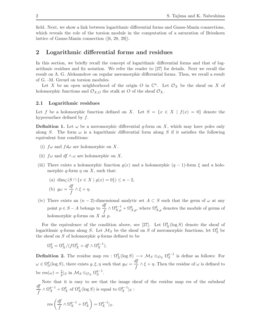 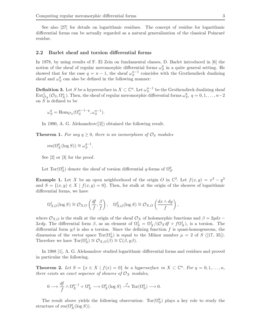 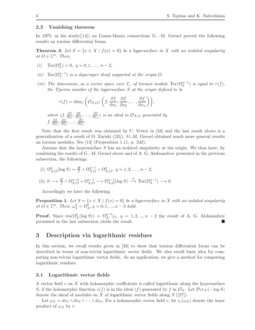 In 1975, K. Saito introduced, with deep insight, the concept of logarithmic differential forms and that of logarithmic vector fields and studied Gauss–Manin connection associated with the versal deformations of hypersurface singularities of type A2 and A3 as applications. These results were published in [33]. He developed the theory of logarithmic differential forms, logarithmic vector fields and the theory of residues and published in 1980 a landmark paper [34]. One of the motivations of his study, as he himself wrote in [34], came from the study of Gauss–Manin connections [5, 32]. Another motivation came from the importance of these concepts he realized. Notably the logarithmic residue, interpreted as a meromorphic differential form on a divisor, is regarded as a natural generalization of the classical Poincaré residue to the singular cases.

In 1990, A.G. Aleksandrov [2] studied Saito theory and gave in particular a characterization of the image of the residue map. He showed that the image sheaf of the logarithmic residues coincides with the sheaf of regular meromorphic differential forms introduced by D. Barlet  [5] and M. Kersken [15, 16]. We refer the reader to [4, 8, 9, 10, 12, 29, 30] for more recent results on logarithmic residues.

Let X be an open neighborhood of the origin O in Cn. Let OX be the sheaf on X of holomorphic functions and OX,O the stalk at O of the sheaf OX.

Let ω be a meromorphic differential q-form on X, which may have poles only along S. The form ω is a logarithmic differential form along S if it satisfies the following equivalent four conditions:

The residue map res:ΩqX(logS)⟶MS⊗OXΩq−1S is defined as follows: For ω∈ΩqS(logS), by definition, there exist g, ξ and η such that

Then the residue of ω is defined to be res(ω)=ξg∣∣S in MS⊗OXΩq−1S.

See also [34] for details on logarithmic residues. The concept of residues for logarithmic differential forms can be actually regarded as a natural generalization of the classical Poincaré residue.

In 1978, by using results of F. El Zein on fundamental classes, D. Barlet introduced in [5] the notion of the sheaf ωqS of regular meromorphic differential forms in a quite general setting. He showed that for the case q=n−1, the sheaf ωn−1S coincides with the Grothendieck dualizing sheaf and ωqS can also be defined in the following manner.

Let S be a hypersurface in X⊂Cn. Let ωn−1S be the Grothendieck dualizing sheaf Ext1OX(OS,ΩnX). Then, the sheaf of regular meromorphic differential forms ωqS, q=0,1,…,n−2 on S is defined to be

For any q≥0, there is an isomorphism of OS modules

where OX,O is the stalk at the origin of the sheaf OX of holomorphic functions and β=2ydx−3xdy. The differential form β, as an element of Ω1S=Ω1X/(OXdf+fΩ1X), is a torsion. The differential form yβ is also a torsion. Since the defining function f is quasi-homogeneous, the dimension of the vector space Tor(Ω1S) is equal to the Milnor number μ=2 of S [18, 47]. Therefore we have Tor(Ω1S)≅OX,O(β)≅C(β,yβ).

In 1988 [1], A.G. Aleksandrov studied logarithmic differential forms and residues and proved in particular the following.

The result above yields the following observation: Tor(ΩqS) plays a key role to study the structure of res(ΩqX(logS)).

In 1975, in his study [13] on Gauss–Manin connections G.-M. Greuel proved the following results on torsion differential forms.

Let S={x∈X|f(x)=0} be a hypersurface in X with an isolated singularity at O∈Cn. Then,

Note that the first result was obtained by U. Vetter in [46] and the last result above is a generalization of a result of O. Zariski [47]. G.-M. Greuel obtained much more general results on torsion modules. See [13, Proposition 1.11, p. 242].

Assume that the hypersurface S has an isolated singularity at the origin. We thus have, by combining the results of G.-M. Greuel above and of A.G. Aleksandrov presented in the previous section, the following:

Accordingly we have the following.

A vector field v on X with holomorphic coefficients is called logarithmic along the hypersurface S, if the holomorphic function v(f) is in the ideal (f) generated by f in OX. Let DerX(−logS) denote the sheaf of modules on X of logarithmic vector fields along S [34].

Let S={x∈X|f(x)=0} be a hypersurface with an isolated singularity at the origin. Then, Ωn−1X,O(logS) is isomorphic to DerX,O(−logS), more precisely

A germ of logarithmic vector field v generated over OX,O by

Let v be a germ of a logarithmic vector field. Then, the following conditions are equivalent:

The logarithmic differential form ω=iv(ωX)f is in Ωn−1X,O+dff∧Ωn−2X,O if and only if the numerator iv(ωX) is in fΩn−1X,O+df∧Ωn−2X,O. The last condition is equivalent to the triviality of the vector field v, which completes the proof. ∎

We say that germs of two logarithmic vector fields v,v′∈DerX,O(−logS) are equivalent, denoted by v∼v′, if v−v′ is trivial. Let DerX,O(−logS)/∼ denote the quotient by the equivalence relation ∼. (See [39].)

defined to be Θ([v])=[iv(ωX)], where [v] is the equivalence class in DerX,O(−logS)/∼ of v. It is easy to see that the map Θ is well-defined. We arrive at the following description of the torsion module.

Let S={x∈X|f(x)=0} be a hypersurface with an isolated singularity. In what follows, we assume that f,∂f∂x2,∂f∂x3,…,∂f∂xn is a regular sequence and the common locus V(f,∂f∂x2,∂f∂x3,…,\allowbreak∂f∂xn)∩X is the origin O. See [19] for an algorithm of testing zero-dimensionality of varieties at a point.

Let a(x) be a germ of holomorphic function in OX,O. Then, the following are equivalent:

Note that in [24, 27], by utilizing local cohomology and Grothendieck local duality, an effective method of computing a set of generators over the local ring OX,O of the module of logarithmic vector fields is given. See the next section.

Assume that f,∂f∂x2,∂f∂x3,…,∂f∂xn is a regular sequence. Let v′ be a logarithmic vector fields in DerX,O(−logS) of the form

Then, v′ is trivial.

Lemmas 3.4 and 3.5 immediately yield the following.

Let f,∂f∂x2,∂f∂x3,…,∂f∂xn be a regular sequence. Let v be a germ of logarithmic vector field along S of the form

Then, the following conditions are equivalent:

Therefore, we have the following.

To be more precise, let A be a basis as a vector space of the quotient

Then the corresponding logarithmic vector fields,

In this section, we briefly recall some basics on local cohomology and Grothendieck local duality. We give an outline for computing non-trivial logarithmic vector fields. We refer to [40] for details.

The duality is given by the point residue pairing:

Let WΓ(f) denote the set of local cohomology classes in Hn{O}(ΩnX) that are annihilated by f, ∂f∂x2,∂f∂x3,…,∂f∂xn:

Then, a complex analytic version of Grothendieck local duality on residue implies that the pairing

and that of a hyperplane section

f|Hx1 of f, where f|Hx1 is the restriction of f to the hyperplane Hx1={x∈X|x1=0}. Then, the classical Lê–Teissier formula [17, 43] and the Grothendieck local duality imply the following:

Let AnnOX,O(WΔ(f)) be the annihilator in OX,O of the set WΔ(f) of local cohomology classes. We have the following.

Recall that the ideal quotient (f,∂f∂x2,∂f∂x3,…,∂f∂xn):(∂f∂x1) is coefficient ideal w.r.t. ∂∂x1 of logarithmic vector fields along S. The lemma above says that the coefficient ideal can be described in terms of local cohomology WΔ(f).

Let WT(f) be the kernel of the map γ. By definition we have

is non-degenerate by Grothendieck local duality, dimC(WT(f)) is equal to

From the exactness of the sequence

The argument above also implies the following.

Notice that the dimension of WΔ(f) that measures the way of vanishing of coefficients of logarithmic vector fields depends on the choice of a system of coordinates, or a hyperplane. In order to analyze complex analytic properties of logarithmic vector fields, as we observed in [39], it is important to select an appropriate system of coordinates or a generic hyperplane. We return to this issue afterwards at the end of this section.

Now let Hn[O](OX)=limk→∞ExtnOX(OX,O/(x1,x2,…,xn)k,OX) be the sheaf of algebraic local cohomology and let

Then, the following holds

In [41], algorithms for computing algebraic local cohomology classes and some relevant algorithms are given. Accordingly, HΓ(f),HΔ(f) are computable. Note also that a standard basis of the ideal quotient (f,∂f∂x2,∂f∂x3,…,∂f∂xn):(∂f∂x1) can be computed by using HΔ(f) in an efficient manner [41].

Now we present an outline of a method for constructing a basis, as a vector space, of the quotient space .

Then, we have the following:

Note that, by utilizing algorithms given in [22], the method proposed above can be extended to treat parametric cases, the case where the input data contain parameters.

In order to obtain non-trivial logarithmic vector fields, it is enough to do the following.

The step above can be executed efficiently by using an algorithm described in [21]. See also [40] for details.

Before ending this section, we turn to the issue on the genericity. For this purpose, let us recall a result of B. Teissier on this subject.

Let p′=(p′1,p′2,…,p′n) be a non-zero vector and let [p′] denote the corresponding point in the projective space Pn−1. We identify the hyperplane

where f|Hp′ is the restriction of f to Hp′ and μ(f|Hp′) is the Milnor number at the origin O of the hyperplane section f|Hp′ of f. He also proved that the set

is a Zariski open dense subset of Pn−1.

Accordingly, in order to obtain good representations of logarithmic vector fields, it is desirable to use a generic system of coordinate or a generic hyperplane Hp′ that satisfies the condition μ(f|Hp′)=μ(n−1)(f).

In a previous paper [25], methods for computing limiting tangent spaces were studied and an algorithm of computing μ(f|Hp′), p′∈Pn−1 was given. In [23, 26], more effective algorithms for computing μ(n−1) were given. Utilizing the results in [23, 26], an effective method for computing logarithmic vector fields that takes care of the genericity condition is designed in [27, 40]. See also [42] for related results.

Now we are ready to consider a method for computing regular meromorphic differential forms. For simplicity, we first consider a 3-dimensional case. Assume that a non-trivial logarithmic vector field v is given:

Let g(x)=∂f∂x1. Then, the following holds

Since g(x)=∂f∂x1, we have, by definition, the following: