We present a practical strategy that aims to attain rate points on the dominant face of the multiple access channel capacity using a standard low complexity decoder. This technique is built upon recent theoretical developments of Zhu and Gastpar on compute-forward multiple access (CFMA) which achieves the capacity of the multiple access channel using a sequential decoder. We illustrate this strategy with off-the-shelf LDPC codes. In the first stage of decoding, the receiver first recovers a linear combination of the transmitted codewords using the sum-product algorithm (SPA). In the second stage, by using the recovered sum-of-codewords as side information, the receiver recovers one of the two codewords using a modified SPA, ultimately recovering both codewords. The main benefit of recovering the sum-of-codewords instead of the codeword itself is that it allows to attain points on the dominant face of the multiple access channel capacity without the need of rate-splitting or time sharing while maintaining a low complexity in the order of a standard point-to-point decoder. This property is also shown to be crucial for some applications, e.g., interference channels. For all the simulations with single-layer binary codes, our proposed practical strategy is shown to be within 1.7 of the theoretical limits, without explicit optimization on the off-the-self LDPC codes. 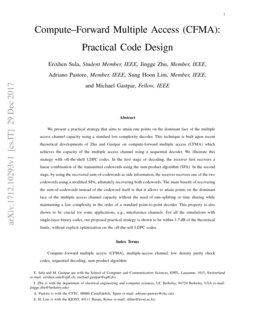 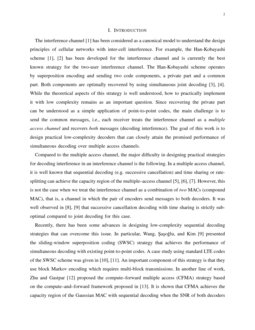 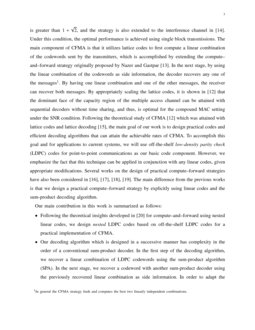 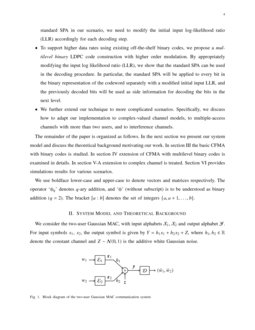 The interference channel [Han--Kobayashi1981] has been considered as a canonical model to understand the design principles of cellular networks with inter-cell interference. For example, the Han-Kobayashi scheme [Han--Kobayashi1981, Etkin--Tse--Wang2008] has been developed for the interference channel and is currently the best known strategy for the two-user interference channel. The Han-Kobayashi scheme operates by superposition encoding and sending two code components, a private part and a common part. Both components are optimally recovered by using simultaneous joint decoding [Chong--Motani--Garg--El-Gamal2008, Bandemer--El-Gamal--Kim2012]. While the theoretical aspects of this strategy is well understood, how to practically implement it with low complexity remains as an important question. Since recovering the private part can be understood as a simple application of point-to-point codes, the main challenge is to send the common messages, i.e., each receiver treats the interference channel as a multiple access channel and recovers both messages (decoding interference). The goal of this work is to design practical low-complexity decoders that can closely attain the promised performance of simultaneous decoding over multiple access channels.

Compared to the multiple access channel, the major difficulty in designing practical strategies for decoding interference in an interference channel is the following. In a multiple access channel, it is well known that sequential decoding (e.g. successive cancellation) and time sharing or rate-splitting can achieve the capacity region of the multiple–access channel [Rimoldi--Urbanke1996, Grant--Rimoldi--Urbanke--Whiting2001, El-Gamal--Kim2011]. However, this is not the case when we treat the interference channel as a combination of two MACs (compound MAC), that is, a channel in which the pair of encoders send messages to both decoders. It was well observed in [Fawzi--Savov2012, Wang--Sasoglu--Kim2014] that successive cancellation decoding with time sharing is strictly sub-optimal compared to joint decoding for this case.

Recently, there has been some advances in designing low-complexity sequential decoding strategies that can overcome this issue. In particular, Wang, Şaşoğlu, and Kim [Wang--Sasoglu--Kim2014] presented the sliding-window superposition coding (SWSC) strategy that achieves the performance of simultaneous decoding with existing point-to-point codes. A case study using standard LTE codes of the SWSC scheme was given in [Park--Kim--Wang2014, Kim--Ahn--Kim--Park--Wang--Chen--Park2015]. An important component of this strategy is that they use block Markov encoding which requires multi-block transmissions. In another line of work, Zhu and Gastpar [Zhu--Gastpar2014b] proposed the compute–forward multiple access (CFMA) strategy based on the compute–and–forward framework proposed in [Nazer--Gastpar2011]. It is shown that CFMA achieves the capacity region of the Gaussian MAC with sequential decoding when the SNR of both decoders is greater than 1+√2, and the strategy is also extended to the interference channel in [zhu_lattice_2015]. Under this condition, the optimal performance is achieved using single block transmissions. The main component of CFMA is that it utilizes lattice codes to first compute a linear combination of the codewords sent by the transmitters, which is accomplished by extending the compute–and–forward strategy originally proposed by Nazer and Gastpar [Nazer--Gastpar2011]. In the next stage, by using the linear combination of the codewords as side information, the decoder recovers any one of the messages111In general the CFMA strategy finds and computes the best two linearly independent combinations.. By having one linear combination and one of the other messages, the receiver can recover both messages. By appropriately scaling the lattice codes, it is shown in [Zhu--Gastpar2014b] that the dominant face of the capacity region of the multiple access channel can be attained with sequential decoders without time sharing, and thus, is optimal for the compound MAC setting under the SNR condition. Following the theoretical study of CFMA [Zhu--Gastpar2014b] which was attained with lattice codes and lattice decoding [Erez--Zamir2004], the main goal of our work is to design practical codes and efficient decoding algorithms that can attain the achievable rates of CFMA. To accomplish this goal and for applications to current systems, we will use off-the-shelf low-density parity check (LDPC) codes for point-to-point communications as our basic code component. However, we emphasize the fact that this technique can be applied in conjunction with any linear codes, given appropriate modifications. Several works on the design of practical compute–forward strategies have also been considered in [Ordentlich--Zhan--Erez--Gastpar--Nazer2011, Hern--Narayanan2013, Feng--Silva--Kschischang2013, Mejri--Othman2015]. The main difference from the previous works is that we design a practical compute–forward strategy by explicitly using linear codes and the sum-product decoding algorithm.

Our main contribution in this work is summarized as follows:

We use boldface lower-case and upper-case to denote vectors and matrices respectively. The operator ‘

We consider the two-user Gaussian MAC, with input alphabets X1, X2 and output alphabet Y. For input symbols x1, x2, the output symbol is given by Y=h1x1+h2x2+Z, where h1,h2∈R denote the constant channel and Z∼N(0,1) is the additive white Gaussian noise.