Transfinite patches provide a simple and elegant solution to the problem of representing non-four-sided continuous surfaces, which are useful in a variety of applications, such as curve network based design. Real-time responsiveness is essential in this context, and thus reducing the computation cost is an important concern. The Midpoint Coons (MC) patch presented in this paper is a fusion of two previous transfinite schemes, combining the speed of one with the superior control mechanism of the other. This is achieved using a new constrained parameterization based on generalized barycentric coordinates and transfinite blending functions. 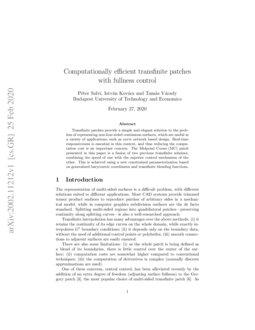 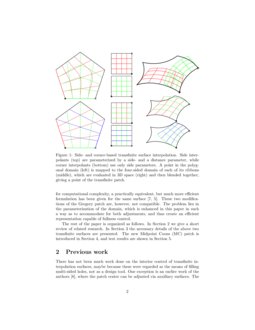 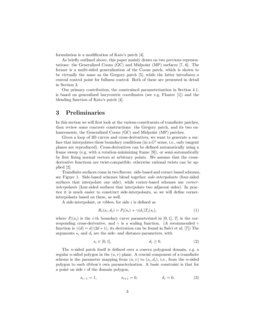 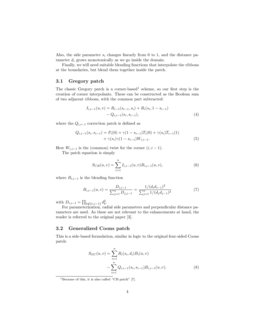 The representation of multi-sided surfaces is a difficult problem, with different solutions suited to different applications. Most CAD systems provide trimmed tensor product surfaces to reproduce patches of arbitrary sides in a mechanical model, while in computer graphics subdivision surfaces are the de facto standard. Splitting multi-sided regions into quadrilateral patches—preserving continuity along splitting curves—is also a well-researched approach.

Transfinite interpolation has many advantages over the above methods: (i) it retains the continuity of its edge curves on the whole domain, while exactly interpolates

G1 boundary conditions; (ii) it depends only on the boundary data, without the need of additional control points or polyhedra; (iii) smooth connections to adjacent surfaces are easily ensured.

There are also some limitations: (i) as the whole patch is being defined as a blend of its boundaries, there is little control over the center of the surface; (ii) computation costs are somewhat higher compared to conventional techniques; (iii) the computation of derivatives is complex (normally discrete approximations are used).

One of these concerns, central control, has been alleviated recently by the addition of an extra degree of freedom (adjusting surface fullness) to the Gregory patch

[3], the most popular choice of multi-sided transfinite patch [6]. As for computational complexity, a practically equivalent, but much more efficient formulation has been given for the same surface [7, 5]. These two modifications of the Gregory patch are, however, not compatible. The problem lies in the parameterization of the domain, which is enhanced in this paper in such a way as to accommodate for both adjustments, and thus create an efficient representation capable of fullness control.

The rest of the paper is organized as follows. In Section 2 we give a short review of related research. In Section 3 the necessary details of the above two transfinite surfaces are presented. The new Midpoint Coons (MC) patch is introduced in Section 4, and test results are shown in Section 5.

There has not been much work done on the interior control of transfinite interpolation surfaces, maybe because these were regarded as the means of filling multi-sided holes, not as a design tool. One exception is an earlier work of the authors [8], where the patch center can be adjusted via auxiliary surfaces. The formulation is a modification of Kato’s patch [4].

As briefly outlined above, this paper mainly draws on two previous representations: the Generalized Coons (GC) and Midpoint (MP) surfaces [7, 6]. The former is a multi-sided generalization of the Coons patch, which is shown to be virtually the same as the Gregory patch [5], while the latter introduces a central control point for fullness control. Both of these are presented in detail in Section 3.

Our primary contribution, the constrained parameterization in Section 4.1, is based on generalized barycentric coordinates (see e.g. Floater [1]) and the blending function of Kato’s patch [4].

In this section we will first look at the various constituents of transfinite patches, then review some concrete constructions: the Gregory patch, and its two enhancements, the Generalized Coons (GC) and Midpoint (MP) patches.

Given a loop of 3D curves and cross-derivatives, we want to generate a surface that interpolates these boundary conditions (in a G1 sense, i.e., only tangent planes are reproduced). Cross-derivatives can be defined automatically using a frame sweep (e.g. with a rotation-minimizing frame [9]

), or semi-automatically by first fixing normal vectors at arbitrary points. We assume that the cross-derivative functions are twist-compatible; otherwise rational twists can be applied

A side-interpolant, or ribbon, for side i is defined as

where Pi(si) is the i-th boundary curve parameterized in [0,1], Ti is the corresponding cross-derivative, and γ is a scaling function. (A recommended γ function is γ(d)=d/(2d+1), its derivation can be found in Salvi et al. [7]) The arguments si and di are the side- and distance-parameters, with

The n-sided patch itself is defined over a convex polygonal domain, e.g. a regular n-sided polygon in the (u,v) plane. A crucial component of a transfinite scheme is the parameter mapping from (u,v) to (si,di), i.e., from the n-sided polygon to each ribbon’s own parameterization. A basic constraint is that for a point on side i of the domain polygon,

Also, the side parameter si changes linearly from 0 to 1, and the distance parameter di grows monotonically as we go inside the domain.

Finally, we will need suitable blending functions that interpolate the ribbons at the boundaries, but blend them together inside the patch.

The classic Gregory patch is a corner-based111Because of this, it is also called “CB patch” [7]. scheme, so our first step is the creation of corner interpolants. These can be constructed as the Boolean sum of two adjacent ribbons, with the common part subtracted:

where the Qi,i−1 correction patch is defined as

The patch equation is simply

where Bi,i−1 is the blending function

For parameterization, radial side parameters and perpendicular distance parameters are used. As these are not relevant to the enhancements at hand, the reader is referred to the original paper [3].

This is a side-based formulation, similar in logic to the original four-sided Coons patch:

There are, however, more constraints on the parameters. For a point on the i-th side:

where the prime symbol means all directional derivatives. These are satisfied by a blended construction—details can be found in the original paper [7].

Because of this constrained parameterization, there are less ribbon evaluations, and thus the computational cost of this surface is about 25% less than that of the Gregory patch, while there is no noticeable change in the surface [5].

Here a new degree of freedom was added to the Gregory patch, in form of a central control point P0:

The modified blending functions are defined as

where H(x) is a Hermite blend

The control point P0 has the default location

but it can be used to move the center of the surface.

In this scheme we also have a new constraint on the parameterization. For points on side i, it should satisfy

This can be achieved using generalized barycentric coordinates. Let us look at this in detail, as this will be the base of our new parameterization in Section 4.1.

Given a convex polygon with vertices Vi, the Wachspress coordinates {λi} of a point (u,v) have the following properties:

and λi decreases linearly on the adjacent domain edges. Now we can define side and distance parameters as

It is easy to see that this construction satisfies all requirements. An example is shown in Figure (a)a.

We would like to combine the GC and MP patches, so that we have a computationally efficient transfinite patch with fullness control. The idea is simple: use the modified blending functions B∗i,i−1 in the GC scheme:

Unfortunately this is not enough. The problem is in the parameterization: it has to satisfy both Eqs. (9)–(10) and (15), which none of the original formulations were capable of.

The barycentric parameters described in Section 3.4 already satisfy every constraint except Eq. (10). This is evident in Figure (a)a, as the blue and red constant parameter lines do not have the same tangent as the green ones near the bottom.

Looking at this figure, we can see that what we need is a new distance parameter ^di that “behaves” as si−1 when si=0, and as si+1 when si=1; but we want to retain the original di for di=0 and di=1 (i.e., at the base side and at non-adjacent sides).

Note that this is a very similar problem to transfinite surfaces—we have four one-dimensional boundary constraints to be interpolated, while for points inside the domain blended values are needed. Indeed, it can be solved using the blending functions of Kato’s patch [4].

Let the values at the boundaries be

and the parameters in the corresponding square domain be

Then the new distance parameter is defined as

Note that this function is singular when ti=tj=0, i≠j. This does not present a problem, as the parameterization is well-defined in these points.

As expected, the new MC patch shows an average of 30% speedup compared to the MP patch, see Table 1.

Figure 3 shows the deviation between an MP and an MC patch. The maximum deviation is ≈0.4% of the bounding box axis, with an average deviation of ≈0.1%. (These values are even tighter, if the MP patch uses the same constrained parameterization.) The two patches are visually indistinguishable.

In Figure 4 we can see how the central control point affects the shape of the surface. This change has no effect on the G1 interpolation properties, as can be seen from the contourings.

We have successfully combined two transfinite surface representations into a new one that takes the best of both worlds: fast evaluation and the ability to control the surface interior. Future work includes optimization with the GPU and the development of efficient derivative computation.