4D Flow is an MRI sequence which allows acquisition of 3D images of the heart. The data is typically acquired volumetrically, so it must be reformatted to generate cardiac long axis and short axis views for diagnostic interpretation. These views may be generated by placing 6 landmarks: the left and right ventricle apex, and the aortic, mitral, pulmonary, and tricuspid valves. In this paper, we propose an automatic method to localize landmarks in order to compute the cardiac views. Our approach consists of first calculating a bounding box that tightly crops the heart, followed by a landmark localization step within this bounded region. Both steps are based on a 3D extension of the recently introduced ENet. We demonstrate that the long and short axis projections computed with our automated method are of equivalent quality to projections created with landmarks placed by an experienced cardiac radiologist, based on a blinded test administered to a different cardiac radiologist. 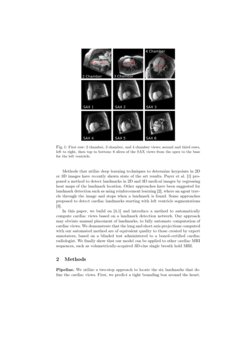 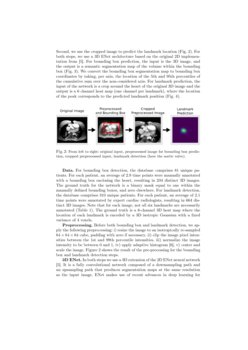 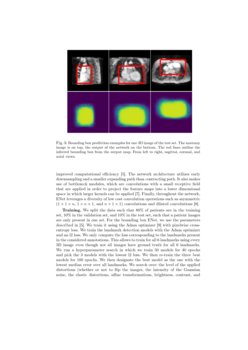 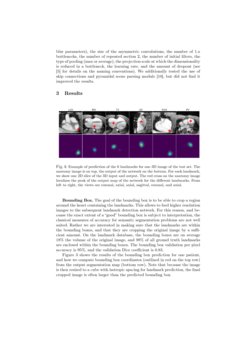 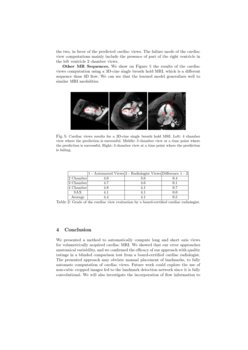 proposed a method to detect landmarks in 2D and 3D medical images by regressing heat maps of the landmark location. Other approaches have been suggested for landmark detection such as using reinforcement learning

[ghesu2016artificial], where an agent travels through the image and stops when a landmark is found. Some approaches proposed to detect cardiac landmarks starting with left ventricle segmentations [lu2011automatic].

In this paper, we build on [pfister2015flowing, payer2016regressing] and introduce a method to automatically compute cardiac views based on a landmark detection network. Our approach may obviate manual placement of landmarks, to fully automate computation of cardiac views. We demonstrate that the long and short axis projections computed with our automated method are of equivalent quality to those created by expert annotators, based on a blinded test administered to a board-certified cardiac radiologist. We finally show that our model can be applied to other cardiac MRI sequences, such as volumetrically-acquired 3D-cine single breath hold MRI.

Pipeline. We utilize a two-step approach to locate the six landmarks that define the cardiac views. First, we predict a tight bounding box around the heart. Second, we use the cropped image to predict the landmark location (Fig. 2). For both steps, we use a 3D ENet architecture based on the original 2D implementation from [paszke2016enet]. For bounding box prediction, the input is the 3D image, and the output is a semantic segmentation map of the volume within the bounding box (Fig. 3). We convert the bounding box segmentation map to bounding box coordinates by taking, per axis, the location of the 5th and 95th percentiles of the cumulative sum over the non-considered axis. For landmark prediction, the input of the network is a crop around the heart of the original 3D image and the output is a 6 channel heat map (one channel per landmark), where the location of the peak corresponds to the predicted landmark position (Fig. 4).

). The ground truth is a 6-channel 3D heat map where the location of each landmark is encoded by a 3D isotropic Gaussian with a fixed variance of 4 voxels.

Preprocessing. Before both bounding box and landmark detection, we apply the following preprocessing: i) resize the image to an isotropically re-sampled 64×64×64

cube, padding with zero if necessary, ii) clip the image pixel intensities between the 1st and 99th percentile intensities, iii) normalize the image intensity to be between 0 and 1, iv) apply adaptive histogram

[zuiderveld1994contrast], v) center and scale the image. Figure 2 shows the result of the pre-processing for the bounding box and landmark detection steps.

3D ENet. In both steps we use a 3D extension of the 2D ENet neural network [paszke2016enet]. It is a fully convolutional network composed of a downsampling path and an upsampling path that produces segmentation maps at the same resolution as the input image. ENet makes use of recent advances in deep learning for improved computational efficiency [paszke2016enet]. The network architecture utilizes early downsampling and a smaller expanding path than contracting path. It also makes use of bottleneck modules, which are convolutions with a small receptive field that are applied in order to project the feature maps into a lower dimensional space in which larger kernels can be applied [he2016deep]. Finally, throughout the network, ENet leverages a diversity of low cost convolution operations such as asymmetric (1×1×n, 1×n×1, and n×1×1) convolutions and dilated convolutions [yu2015multi].

Training. We split the data such that 80% of patients are in the training set, 10% in the validation set, and 10% in the test set, such that a patient images are only present in one set. For the bounding box ENet, we use the parameters described in [paszke2016enet]. We train it using the Adam optimizer [kingma2014adam]

with pixelwise cross-entropy loss. We train the landmark detection models with the Adam optimizer and an l2 loss. We only compute the loss corresponding to the landmarks present in the considered annotations. This allows to train for all 6 landmarks using every 3D image even though not all images have ground truth for all 6 landmarks. We run a hyperparameter search in which we train 50 models for 40 epochs and pick the 3 models with the lowest l2 loss. We then re-train the three best models for 100 epochs. We then designate the best model as the one with the lowest median error over all landmarks. We search over: the level of the applied distortions (whether or not to flip the images, the intensity of the Gaussian noise, the elastic distortions, affine transformations, brightness, contrast, and blur parameters), the size of the asymmetric convolutions, the number of 1.x bottlenecks, the number of repeated section 2, the number of initial filters, the type of pooling (max or average), the projection scale at which the dimensionality is reduced in a bottleneck, the learning rate, and the amount of dropout (see

[paszke2016enet] for details on the naming conventions). We additionally tested the use of skip connections and pyramidal scene parsing module [zhao2016pyramid], but did not find it improved the results.

Figure 3 shows the results of the bounding box prediction for one patient, and how we compute bounding box coordinates (outlined in red on the top row) from the output segmentation map (bottom row). Note that because the image is then resized to a cube with isotropic spacing for landmark prediction, the final cropped image is often larger than the predicted bounding box.

Landmarks. The results of the designated best model on the test set are presented in Table 1. The per landmark median error (distance between the ground truth and the prediction), averaged over all 6 landmarks, is 8.9 mm, and the median error over all prediction is 8.8 mm for the test set. Cadaveric studies by [ilankathir1cadaveric] find that the average radius of the smallest valve (the PV) is 10.8 mm. Our average localization error is therefore less than the average radius of the smallest cardiac valve. Figure 4 presents the landmark detection results for one patient. The inference time for one study is on average a little less than a second on an NVIDIA Maxwell Titan X, depending on the original size of the input image.

Cardiac Views. Figure 1 shows the predicted cardiac views for a single time point for the left ventricle. Although the model is trained at sparsely annotated time points of the cardiac cycle (mainly the time points corresponding to the end diastole and the end systole), we can predict the landmarks location for each time point.

In order to compute the cardiac views, we predict each landmark position at each time point, and then take the median position over time in order to compute the projection with fixed landmark (otherwise, the projected cardiac views would move during the cycle, which can be confusing for the clinician). To evaluate the quality of the cardiac views, we blindly presented them to a board-certified cardiac radiologist who was not involved in the ground truth collection or any other aspect of this work. We presented the radiologist with 2D cine movies over the cardiac cycle of projections computed from both the ground truth annotations and the predicted landmarks for the full test set. The order of the movies were randomized so the clinician did not know whether any given movie came from ground truth or predicted landmarks. We asked the clinician to grade each projections (2/3/4 chamber and SAX views) from 1 (bad projection unsuitable for diagnosis) to 5 (clinically relevant cardiac views). Table 2 shows the results. The grade shows that the quality of the predicted cardiac views is on par with the ground truth views with an average grade difference of 0.5 between the two, in favor of the predicted cardiac views. The failure mode of the cardiac view computations mainly include the presence of part of the right ventricle in the left ventricle 2 chamber views.

Other MR Sequences. We show on Figure 5 the results of the cardiac views computation using a 3D-cine single breath hold MRI, which is a different sequence than 4D flow. We can see that the learned model generalizes well to similar MRI modalities.

We presented a method to automatically compute long and short axis views for volumetrically acquired cardiac MRI. We showed that our error approaches anatomical variability, and we confirmed the efficacy of our approach with quality ratings in a blinded comparison test from a board-certified cardiac radiologist. The presented approach may obviate manual placement of landmarks, to fully automate computation of cardiac views. Future work could explore the use of non-cubic cropped images fed to the landmark detection network since it is fully convolutional. We will also investigate the incorporation of flow information to help localize the landmarks. This additional data would likely be most helpful to locate the valves. However, flow data requires careful handling because it can be particularly noisy.