Multispectral and hyperspectral image analysis has experienced much development in the last decade. The application of these methods to palimpsests has produced significant results, enabling researchers to recover texts that would be otherwise lost under the visible overtext, by improving the contrast between the undertext and the overtext. In this paper we explore an extended number of multispectral and hyperspectral image analysis methods, consisting of supervised and unsupervised dimensionality reduction techniques, on a part of the Syriac Galen Palimpsest dataset (www.digitalgalen.net). Of this extended set of methods, eight methods gave good results: three were supervised methods Generalized Discriminant Analysis (GDA), Linear Discriminant Analysis (LDA), and Neighborhood Component Analysis (NCA); and the other five methods were unsupervised methods (but still used in a supervised way) Gaussian Process Latent Variable Model (GPLVM), Isomap, Landmark Isomap, Principal Component Analysis (PCA), and Probabilistic Principal Component Analysis (PPCA). The relative success of these methods was determined visually, using color pictures, on the basis of whether the undertext was distinguishable from the overtext, resulting in the following ranking of the methods: LDA, NCA, GDA, Isomap, Landmark Isomap, PPCA, PCA, and GPLVM. These results were compared with those obtained using the Canonical Variates Analysis (CVA) method on the same dataset, which showed remarkably accuracy (LDA is a particular case of CVA where the objects are classified to two classes). 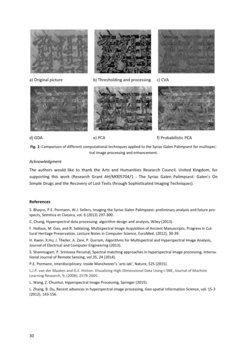